A Beaverton memorial to missing Portland boy Kyron Horman is at the center of a dispute after new owners of the property that's been home to the memorial since 2011 this week trashed many of the ribbons, teddy bears and balloons that decorated the site, sparking outrage from Kyron's mother, Desiree Young.

As is the case with almost everything having to do with Kyron Horman, the former Skyline Elementary School student whose 2010 disappearance horrified the world, the dispute has opened up familial wounds—and in very public fashion.

Young, who still lives in Medford, says no one ever told her that the mementos were coming down. So permanent did the chain link fence strewn with tributes seem, that it long ago earned a name: the Wall of Hope.

Rusty Sandusky, the general manager for the business that housed the memorial, says the goal wasn't to destroy it but to revamp it. Deflated balloons, dirty stuffed animals and weathered fliers were turning off customers at International Fitness, the Beaverton gym he runs. He says he had the blessing of Kyron's father and Young's ex-husband, Kaine Horman, to alter the wall.

But Young says she feels hurt. She regularly visited the wall, which had become over the years a gathering spot for supporters, including search parties and law enforcement. The trinkets had reminded her that a lot of people around the world hoped for Kyron's safe return. And their removal, she says, sends a message she doesn't want to contemplate.

"They're basically telling people," she says, "Kyron is not going to come home and ever going to see these items."

By now, the story of Kyron's June 4, 2010 disappearance is well known. The shock of losing a child, who seemed to simply vanish from his school, grabbed international headlines, and the family drama that surrounded the event further fueled the public's interest. Terri Moulton Horman, Kyron's stepmother, was the last person reported to have seen Kyron. Despite Young's long-held belief that Terri Horman played a role in Kyron's vanishing, law enforcement officials have never named her as a suspect.

In the immediate aftermath of Kyron's disappearance, grieving community members placed tributes to the then 7-year-old boy on a chain link fence outside Skyline Elementary, in outer Northwest Portland. Portland Public Schools took down the fence in August, before school started again, for safety reasons, but the memorial re-emerged at a temporary home down the street from the school. In 2011, it moved to what was then known as Xtreme Edge Gym in Beaverton, where Kaine Horman regularly works out.

Bob Briede, the then-owner of the gym, gladly lent his property to the memorial.

"I told Kaine I was in it till the end," says Briede, "that I would support it as long as they needed me to."

Still, no one imagined it would be years.

When Briede sold his gym this spring, he says he told the new owner, Troy Finfrock, that he had an agreement with the Horman family. He regrets the new owner's actions have upset Young, he says.

"They didn't have a relationship like I had with Kaine," says Briede, "and they decided to do their own thing with the wall."

Finfrock, who renamed the gym International Fitness, says he was not aware of any agreement that prohibited him from altering the memorial. Besides, he wants to improve it, he says. "We're going to make it better and more permanent," said Finfrock.

Today, what's left of the Wall of Hope is a large photo of Kyron Horman, a few fliers and a small bench. 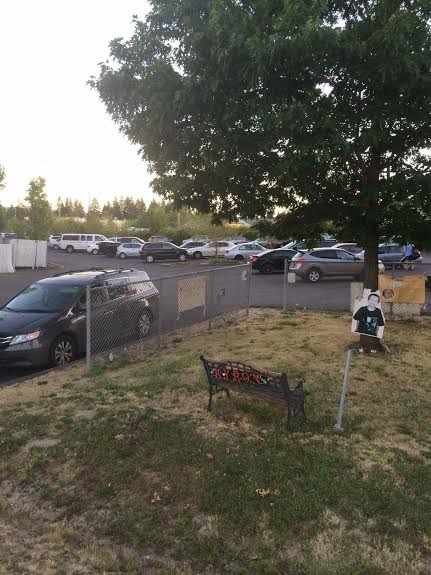 Kaine Horman couldn't be reached for comment. Young says he doesn't inform her about his decisions, and that she is always blindsided by them. "[I] usually find out from the media," she says.

Young says she's not giving up hope, even if the wall's removal suggests otherwise to people.

"Kyron's part of my DNA, I'm never going to stop," she says. "I would never tell people to not support him or to give up hope. I think that's what they did. They took away their hope, and I think it's wrong."