By Nigel Jaquiss
October 04, 2016 at 10:30 pm PDT
The presidential race excepted, there’s no bigger or more contentious issue on this November’s ballot than Measure 97. The proposal would tax certain corporations 2.5 percent of their Oregon sales over $25 million, raising $3 billion a year in new revenue.

If the past two decades of Oregon politics have been a cold war between unions and business, this ballot measure is labor pressing the nuclear launch button.

Our Oregon, a public employee union-backed group, wrote Measure 97. Business groups and the large corporations who would pay the tax hate it with a passion—and a pocketbook—rarely seen in Oregon politics. They’ve already raised more than $16 million and may double that figure before Nov. 8.

That money is funding advertising blocks squeezed between evening news broadcasts and Ducks losses. Both campaigns are blasting talking points. Here are three myths worth debunking:

Myth 1: We’ve never seen a change in taxes of this magnitude.

The financial impact of Measure 97 would be huge—$3 billion a year—but the Legislative Revenue Office says it will have the same relative impact as 1990’s Measure 5 in terms of the percentage of taxpayer income that goes into government coffers. The difference: Measure 5 reduced taxes, Measure 97 raises them. 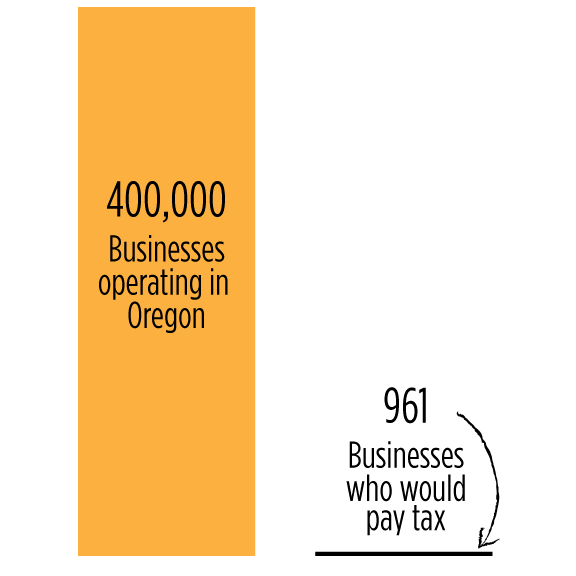 In fact, very few companies would pay the tax, which applies to sales, not profits. Oregon partnerships and pass-through companies would be exempt. But the companies that would pay are widely unpopular—a fact Our Oregon admits factored into how the measure was written.

Myth 3: We really need this money, and we know where it’s going.

Figures show that money has poured into the state’s general fund—it’s up 52 percent in the past decade. How lawmakers would spend the $3 billion annual windfall provided by Measure 97 is completely up to them because there are no restrictions. The general fund goes to education, health care, social services and public safety, but lawmakers have enormous leeway—and a giant pension deficit to address.

Let’s break down this big tax proposal into some smaller numbers.

Percentage of Measure 97 taxes that would be paid by the 50 largest payers.

Percentage of companies that would pay the tax that are based outside Oregon.

Oregon’s current national rank in taxes as a percentage of total income.

Current percentage point difference between Washington (58 percent) and Oregon (38 percent) in business taxes as a percentage of taxes collected.

Number of states with gross receipts taxes like Measure 97.

Number of contributions of $50,000 or more received by the “no” campaign.

Number of contributions of $50,000 or more received by the “yes” campaign.

Number of contributions of $750,000 received by the “yes” campaign (from the Oregon Education Association and Service Employees International Union).

Projected budget deficit in billions of dollars for the next two years if Measure 97 does not pass.

Value in millions of dollars of Oregon Legislature-approved corporate tax breaks currently on the books.