A four-day-long strike by Burgerville employees came to an end Sunday when the Burgerville Workers Union said management agreed to renegotiate wage contracts. But another strike could be imminent.

The union and company executives are scheduled to meet for another bargaining session on November 5, and the BVWU says it is ready to go on strike again if management does not present a better wage offer.

Hi @BurgervilleUSA, you better bring a better wage offer at the next bargaining session!

The whole country is watching you! Do the right thing!#BoycottBurgerville#1u

In a statement Monday, Burgerville said it would not renegotiate wages with the union, but that it would discuss "the criteria by which employees move up the pay scale."

"Burgerville has clearly communicated to the union during bargaining sessions—including the 10/25 session," the company said, "that the recently announced wage increase for all crew members is the company's last, best and final offer."

The company is offering a $1 an hour wage for employees at all 41 stores. Workers say that's just an expedited effort to meet state-mandated minimum wage requirements.

Mangement claimed in a statement on Oct. 27, when the strike ended, that "all 41 restaurants remained open during the strike." That was only partially true. On Oct. 25, WW observed that during a BVWU picket at the chain's Montavilla location, the company closed the store's dining room at around 12:40 pm so that it was only serving customers at the drive-thru. The strike's successful disruption of business suggests that the economic impact of the protests could be larger than the company is letting on.

"Burgerville corporate is not coming to an agreement with us on the contract and it's been 18 months since we've been fighting this," Betty Buchanan, a worker at the Montavilla Burgerville told WW during the protest. "We're all the backbone of the company. Without us, the company can't run. I'm here to prove a point to all businesses that we have the right to speak our mind and get what we need to be able to survive and not live paycheck to paycheck."

Observers respond to the picket on Friday with varying degrees of support. Some people honked and gave thumbs up. Others yelled, "Get a real job."

At around 12:50 pm, three Portland police officers arrived to meet with the company representative on site. That rep declined an interview with WW.

A handful of Antifa members also showed up in support of the BVWU.

"The Union's fight for a living wage and a fair contract will continue," the BVWU said in a statement. "Until then, the BVWU asks the Portland community to continue supporting workers by boycotting Burgerville and turning out to future events." 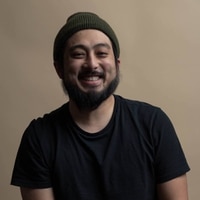 Justin Katigbak is an editorial and documentary photographer.