Oregon is Producing New Millionaires Faster Than Any Other State, Think Tank Says

Meanwhile, everybody else is getting left behind as income inequality widens to the biggest recorded gap.

The Oregon Center for Public Policy, a left-leaning think tank, this week released two reports that provide new information about the rapid growth of wealth in this state—and how unequally that wealth is distributed.

First, OCPP reported, newly-release IRS figures show the number of people reporting incomes of more than a  million dollars between 2000 and 2017 grew at a faster rate in Oregon than in any other state. 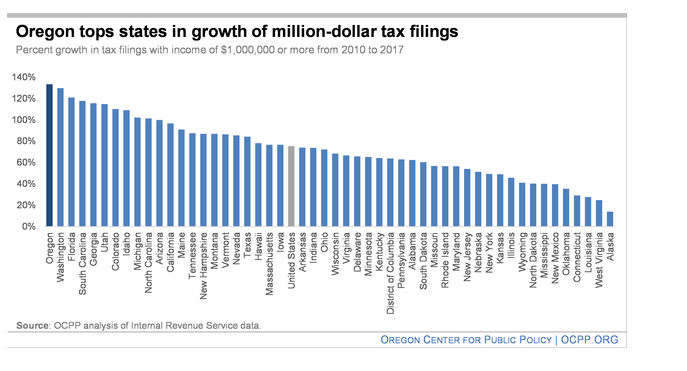 There are a couple of different implications from the data, said OCPP's Juan Carlos Ordóñez. First, Oregon's personal income rates, which are among the nation's highest, have not deterred high earners from living here.

Second, Ordóñez said, those high-earners could contribute more to the cost of public services.

"At the same time that we've seen sharp growth in the number of million-dollar incomes in Oregon, we've also seen a housing crisis explode, college tuition climb, and preschool stay out of reach for half of all children in our state," Ordóñez said in a statement. "On many levels, it makes sense to ask the richest Oregonians to contribute more toward the common good."

A second OCPP report looks at the yawning income gap between rich and poor. It's getting bigger.

"The income gap separating those Oregonians in the middle of the income ladder and those at the very top has never been wider," the report says. "In 1980, it took 26 typical (median income) Oregonians to equal the average income of the highest-earning 1 in 1,000 taxpayers. By 2017, this had grown to 131 typical Oregonians. That is a nearly five-fold increase. The top 1 percent — highest-earning 1 in 100 taxpayers — have also seen their earnings rise much faster than the typical Oregonian. In 1980, it took the combined incomes of 10 typical Oregonians to equal the income of the average member of the top 1 percent. The gap rose to about 29 median households in 2017, a nearly three-fold increase."

"The highest earning 1-in-1,000 Oregonians are hauling in record amounts of income, at a time when the income of the typical Oregonian has stagnated — and when many struggle to afford housing, child care, and other essentials," the OCPP report says. "As the latest data underscores, income inequality remains former President Barack Obama called 'the defining challenge of our time.'"