But a mystery remains: What happened to the shoes?

On June 25, Nike decided to halt sales of the Air Max 1 Quick Strike Fourth of July—a shoe that depicts an 18th century flag design by Betsy Ross. Multiple reports traced the decision to objections raised by activist Nike pitchman Colin Kaepernick, who warned that the design had been co-opted by hate groups that express nostalgia for the nation before slavery was abolished.

But a new report by e-commerce research firm Edison Trends shows Nike's sales have remained within their normal fluctuation range since the June 25 decision (though the storm of social media attention didn't kick off until July 1).

"Despite some speculation that it could have negative impact on sales, our data shows Nike online sales have remained virtually untouched and continue to steam ahead with strong sales as normal," Hetal Pandya, co-founder of Edison Trends, tells WW.

Nike's online sales spiked by 31 percent when it launched an ad campaign starring Kaepernick last year—and the company isn't paying for that with decreased sales now (see chart below). 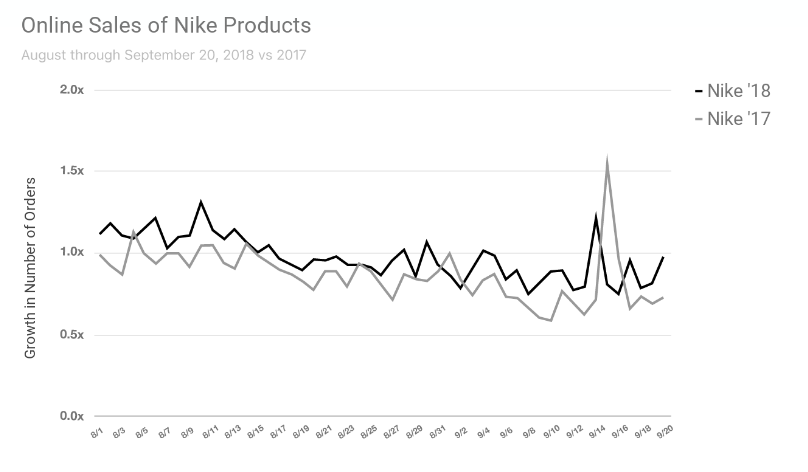 Forbes reported July 8 that since the Betsy Ross shoe was taken off the market, Nike’s stock price has risen by 2 percent and $3 billion has been added to the company’s market value.

The few shoes that weren't returned by stores to Nike are now a hot commodity. One pair sold on eBay for $15,000.