After a day in which the family of a man killed by Portland police called for an independent prosecutor, and the mayor promised a crackdown on police-abolition activists who smash windows during protest marches, a few dozen black bloc marchers entered the upscale Alphabet District as bars were nearing last call.

As Mayor Ted Wheeler warned Friday of a march starting in Couch Park, and said he would extend a state of emergency through the weekend, business owners in Northwest Portland and the Pearl District swiftly boarded up their windows, anticipating vandalism.

About 50 protesters arrived in Couch Park after dark and, at 9:15 pm, marched westward—into the center of outdoor dining and drinking on 21st Avenue. The group marched through the street to the beat of drums. Along 21st, tipsy bar patrons at outdoor tables watched merrily, with one woman raising her fist. Some bargoers joined in the chants. “Fuck Ted Wheeler!” they said, laughing.

The march was short-lived. Members of the crowd spray-painted anti-fascist symbols and racial justice slogans on the windows of the Alphabet District businesses and bus stops. Several people smashed the windows of a Starbucks on 23rd Avenue. Police said that several people broke into a business on Hoyt Street and tried to enter it, before other people in the crowd pulled them back.

Portland police declared a riot shortly thereafter, at 9:38 pm. Crowds circled back to Couch Park, and most departed before law enforcement could mount any dispersal actions. Portland police detained two individuals and arrested one from the crowd departing the scene.

The events of the night followed a well-established pattern of protest and property destruction by the city’s most strident anti-police activists. They gained significance because they occurred hours after the mayor condemned the repeated property damage in vivid and personal terms.

“Self-described anarchists, who engage in regular criminal destruction, don’t want things to open up, to recover,” Wheeler said in a press conference. “They want to burn. They want to bash. Like they did to the nonprofit Boys and Girls Club in Northeast Portland. Really? They want to intimidate.”

Wheeler pledged to crack down on black bloc protesters, and asked city residents to report the arrival in their neighborhoods of people dressed head-to-toe in black—including telling police their license plate numbers.

The mayor’s remarks set off a flurry of social media debate. The American Civil Liberties Union of Oregon and the activist group Don’t Shoot Portland denounced his statements. Observers argued late into the night whether Wheeler’s pledged crackdown would impinge on civil liberties, discourage lawbreaking, or goad people into further crimes.

In reality, it seemed to have little effect on the new normal.

As they departed Couch Park, some activists slipped one-sheet fliers under the windshield wipers of cars parked along Northwest Glisan Street. The fliers decried the killing of Robert Delgado in Lents Park on April 16 by Portland Police Officer Zachary DeLong. (DeLong shot Delgado after responding to a 911 call regarding a man quick-drawing a gun in the park.)

It suggested citizens call Multnomah County District Attorney Mike Schmidt to demand he file charges against DeLong, and that Portlanders join an effort to recall Wheeler.

The fliers were a clue that, while the mayor hasn’t publicly acknowledged the connection, at least some activists damaging property are responding to police actions.

“This is the sort of circumstance we are protesting.” 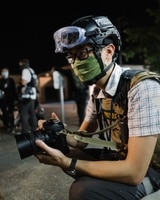