The first six days of Jeremy Christian's murder trial were a catalog of grief and pain.

Prosecutors played graphic cellphone videos showing Christian fatally stabbing Taliesin Namkai-Meche and Ricky Best aboard a crowded MAX train car on May 26, 2017. Passengers on that train recalled pools of blood, and described their attempts to comfort the dying men. Portland police officers and other witnesses recounted Christian's fury and defiance: "I'm all good," he told police. "I stabbed motherfuckers in the neck and I'm happy now."

But perhaps the most significant moment in the trial's first week came on its first day, Jan. 28, in the testimony of Walia Mohamed and Destinee Mangum.

Christian's racist rant against the two black teenage girls, one of them wearing a hijab, prompted Micah Fletcher, Namkai-Meche and Best to confront him. (At press deadlines on Feb. 4, Fletcher was taking the stand.)

The testimony of Mohamed and Mangum, who were 17 and 16 years old on the day of the attacks, is central to the prosecution's case, because it suggests Christian wasn't merely defending himself in a politically charged fight, as his attorneys have argued ("The Antifa Defense," WW, Jan. 15, 2020).

But their accounts also resonate beyond the courtroom. Last week's testimony is the most detailed account people in this predominantly white city, where people of color sometimes feel marginalized, have heard from the women Christian initially targeted.

Here's how Mohamed, now 20, and Mangum, 18, described the attack, and how it changed their lives.

Prosecuting attorney Jeffrey Howes: So you heard "fuck Muslims," "go back to Saudi Arabia" and "kill yourself"? Those are the three things you remember hearing?
Walia Mohamed: Yes.

Was there anybody else on that train that you could see that was wearing a hijab?
No.

Were you scared?
Yes.

And what's the next thing you remember happening after you moved?
Micah.

Micah Fletcher? What did he do, what did you see him do?
He just stood in the middle of the man and us, and he was just—basically standing up for us.

What happened next?
I don't know. I didn't know [Christian] had a knife with him, so when he got up, he just went off.

What do you mean by that? "Got up" and "went off"? You didn't know he had a knife, what did you see him do?
He just was moving again and stabbing.

When did you realize that, in fact, he had a knife?
When I saw Taliesin and he was holding his neck. And we saw blood. That's when we realized he had a knife [crying].

What did you do when you saw that?
We started running.

Why are you running away?
Because I thought he was going to come after us and kill us too.

Were you scared then?
Yes. It was just aggressive. It was just like hurtful things. I never experienced it, so, it's like me being Muslim. We are hated, so I could lose my life.

Is that how you feel sometimes?
Yes.

How soon after this incident did you stop wearing your hijab?
After a couple weeks.

Defense attorney Dean Smith: So you're absolutely certain he was talking about Nazis and the KKK?
Destinee Mangum: Yes.

You started to tell us about what you were thinking right before you moved from the seats down below on the side up…why did you decide to move?
I told [Mohamed] that it looks he doesn't care about anybody's life on here, so we should move away from him.

So that was just something you picked up from everything he said, down to the way he acted?
Yes. I could see it in his eyes.

Howes: Did you hear the interaction between Micah Fletcher and Jeremy?
Mangum: I heard some of the arguing, like him just like kind of egging Micah on to do something to him. He kept just saying like, "Hit me, hit me, do something, do something."

When he was saying that stuff, did it appear that he [Christian] was just trying to defend himself from an attack?
No. It feels like he was trying to start something.

[Prosecution shows a cellphone video that Mangum shot while running away.]

At the end of that video, there's a lot of screaming. Who's doing all the screaming on that video?
Me.

Why are you screaming at the end of that video?
Because I saw him stab Taliesin and I saw him with his hands [crying, inaudible] and then, when we first turned around and started running, he got off the back, and we could see him getting off the back, so we turned around so we were like, "Oh my God, he's coming after us."

Did you know what he had in mind?
I feel like he was just coming to finish the job.

Tess Riski covers prisons, the alt-right movement and more. She has previously written for the Miami Herald, the Wall Street Journal and the New York Times. Tess recently graduated from the Columbia Journalism School, where she was a Stabile fellow in investigative journalism. She is originally from Seattle. 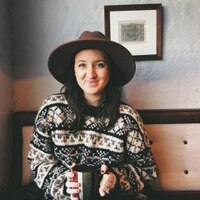 Camille Soleil moved to Portland from Chicago in 2019 and studied Journalism at the University of Wisconsin, where she was involved in the university's independent student newspaper, The Badger Herald. Camille also teaches yoga at various studios across Portland and enjoys spending time outdoors, exploring the city and playing with her two cats.