With billions of dollars of state budgets still awaiting the return of Senate Republicans from their seven-day, self-imposed exile, conversation in the Capitol has devolved to smaller topics, such as the definition of the word "reset."

Earlier this week, WW reported new details about an earlier Senate GOP walkout this session, when the 11-member caucus departed to deprive the chamber of a quorum and prevent a vote on a multi-billion corporate tax hike.

Related: Newly Obtained Document Shows Senate Republicans Signed an Agreement in May to Not Walk Out Again

On May 13, Gov. Kate Brown, Senate President Peter Courtney (D-Salem) and Senate Minority Leader Herman Baertschiger (R-Grants Pass) all initialed a six-point, one-page agreement to the terms that would bring Republicans back for the tax vote. 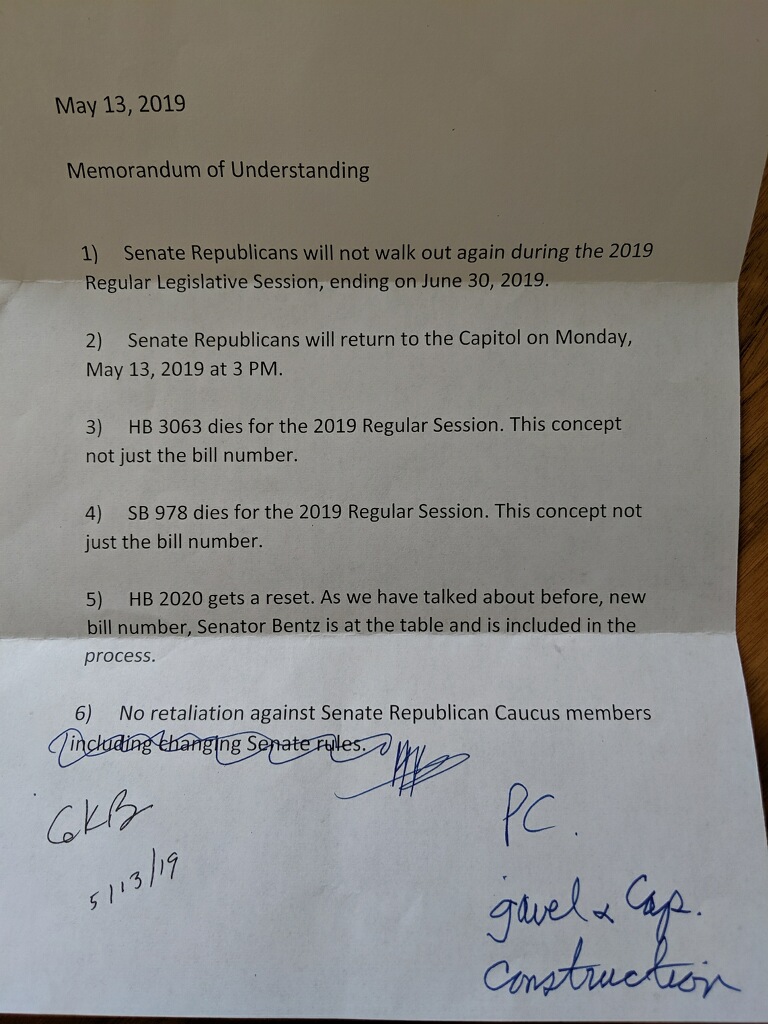 Baertschiger told WW in a June 25 email that Democrats violated the deal.

"Cap and Trade never got a reset," he said. "Part of the agreement was to change the entire bill number. A new bill number would have ensured Sen. Bentz would have been at the table to have a true reset."

Dembrow says that in a May 15 meeting in Courtney's office with Baertschiger and Bentz, the Republicans said that a new bill number would not be necessary.

"We'd gotten a request from legislative administration that for the sake of transparency the more we can keep to a single bill number the better," Dembrow says. "Sen. Bentz agreed there was no point to changing it. We all agreed."

Power says that at a meeting a week later, on May 22,  with a different group, Bentz again said there was no need for a bill number. She recalls being confused as to why there was any question about the bill number, because she was unaware of the details of the agreement that brought Republican senators back to the building.

"Cliff said that they were allowing us to keep the bill number [2020] and would not be requiring a new bill number," Power says. "At the time I didn't know why he said that."

"When we went to meet with Sen. Courtney and Michael Dembrow, Herman [Baertschiger] said we don't need a bill number," Bentz tells WW. "I said 'I agree with Herman." The bill was important to Sen. Dembrow and I didn't view a cosmetic change to a bill number to be very important."

Baertischiger didn't respond to a request for comment. A GOP Senate spokesman attributed the discrepancy to the hectic conditions that have prevailed in the past week.

On the issue of whether Democrats engaged Bentz in an effort to "reset" the bill there is less agreement.

Bentz says he'd been frozen out of discussions on the bill for months and that part of Republicans' desire was to bring him back to the table and allow him to have input on the 100-page bill, on which stakeholders offer more than 100 amendments.

He and Dembrow agree that after the meeting in Courtney's office, they met in Dembrow's office for more  detailed discussions. Bentz says he wanted Democrats to focus on three main points: figuring out how to keep trucks and the freight industry from ruin from higher fuel prices; using proceeds from cap-and-trade of fund a transition to electric vehicles; and making allowances for the carbon reduction benefit Oregon's forests provide, rather than focusing solely on emissions.

"I got nowhere with him," Bentz says. "I left his office feeling very discouraged."

Dembrow says the agreement to a "reset" did not mean Bentz got to re-write the bill. He says that Bentz had considerable influence in shaping HB 2020.

"He was co-vice chair of the Joint Committee on Carbon Reduction," Dembrow says. "We spent many, many hours together and many of his perspectives made it into the bill—but what he was suggesting would have seriously altered it."

Power says that after the GOP senators returned May 13, Bentz was involved in key discussions and that the bill was amended twice, including the inclusion of changes that infuriated environmentalists.

"We adopted some of the language Oregon Forest Industries Council wanted," Power says. "We worked in complete good faith to address Republicans' concerns while still holding together an effective bill—but I would not read the word 'reset' as allowing them to dictate policy."

Bentz says he respects the work his Democratic colleagues did but wishes they'd listened to the ideas he presented on behalf of businesses and rural Oregonians more.

"They will say they made an attempt at a 'reset,' he says "I will suggest that in my opinion they did not—but there's lots of room for disagreement."

As to the larger question of when Republicans will return to Salem, Bentz says that's complicated. "There are many different opinions within our caucus," he says. "The work of the state will get done—exactly when remains to be negotiated."