Islands in the Stream

The Undiscovered Lands of the Great Willamette River.

Islands are the kind of thing that Jay Z buys Beyoncé for her birthday. Why? Because they are the perfect thing to make people look at you longingly from a distance and softly mumble in jealousy. Whether you rented a boat (we recommend Alder Creek Kayak & Canoe) or you were romantic and foolish enough to buy one of your own, this is where it will shine. You can chuckle at shore-huggers from a quiet plot in the middle of the mighty Willamette River, which contains many obscure islands trodden upon only by the brave few.

Here is our guide to the great islands of the Willamette, from south to north. 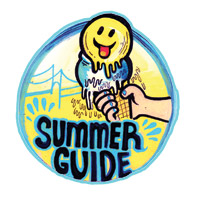 The Willamette's southernmost island before the falls is large and wooded, with empty Styrofoam teriyaki beef containers and a small, creepily hand-painted, children's Christmas stocking near the fire pit in the center. It has rocky beaches, and it generally hurts to walk barefoot.

What it's named after: Goats, which were not on it when we went there and it is not shaped like.

A long, thin island with a lagoon, Cedar Island can be accessed from West Linn by a floating footbridge for a good portion of the year, which makes it a boring island because you have a boat and want to feel special. Here's the thing—on its north side, it offers amazing views of the Cedaroak boat ramp, where one can sip Rolling Rock on the beach and laugh as embarrassed idiots attempt to back their boat trailers slowly into the water, only for things to go all wonky at the last second.

What it's named after: Trees.

Appropriate activities: Anchor and fish in the small lagoon, lay on the beach, or watch incompetent people put in/take out boats from the river.

Google Maps says Oak Island—labeled on a sign on the wooded island—is called "Hog Island" and I don't know why. Then again, I have always called it "that place where Southwest Portland teens in Billabong shorts anchor Dad's massive wakeboard boat and blast Lil Jon." Who knows who is right at this point. The small island, located pretty far south of Portland, near Marylhurst University, is very rocky except for a tiny beach on the west side, where Daddy's boats frequently block access.

What it's named after: Also trees. Or, if you believe Google Maps, pink mammals with sad eyes.

Appropriate activities: Skipping rocks on the east side, shotgunning tallboys of Keystone with unambiguously underage boaters on the west side, sitting in a gently shaded clearing in the middle.

Apparently, East Burnside got a boat. The large dance hall from the early 1900s is gone, but Elk Rock Island proudly carries on its party traditions, despite the city's wishes. The big island, equal parts trailed forest, rocky outcropping and sandy beach, raises the question, "Who doesn't want to hang out by a fire pit near a tree spray-painted '4:20' and surrounded by broken glass?"

What it's named after: Native Americans allegedly used to run elk off of Elk Rock proper (across the river) and then retrieve them from the river to eat them. This island had rocks too, and was sort of near there. No elk, though.

What it's named after:It's east of Ross Island.

Wildlife: You're only allowed to know about the trees and shrubs.

(including Hardtack and Toe islands)

Ah, Ross Island, home to the only lagoon in Portland where I can easily imagine the Terminator drowning. The beachy, post-industrial shell of an island—45 acres of which were donated to the city by local business magnate Robert B. Pamplin Jr. after Ross Island Sand & Gravel Company dug all the money out of the middle and then felt kind of bad about it—is where happy libertarians anchor their pirate ships and yell things about the government…while floating on a river the government owns.

What it's named after: Oregon pioneer Sherry Ross, who raised dairy cows there before it was a money pit.

Appropriate activities:Anchoring for lunch, long walks on the beach, pretending things have always been this way.

Despite the fact that pesky landlubbers can make it there easier than you can with your mildewy Boston Whaler, the industrial Swan peninsula is relatively nice. Home to a loggy and remarkably underutilized beachfront, the former home of the Swan Island Municipal Airport is itself pretty ugly to look at, so just turn your gaze northwest, where you can watch the Willamette roll by, along with the occasional beer can from upstream.

What it's named after: It was once a beautiful island with trumpeter swans on it. Now it's an industrial, manmade peninsula.

Appropriate activities: Beach-blanket picnics, triumphant floating arrivals to pick up your significant other who lives in Northeast Portland, train watching.

Portland's largest island will have you thanking God you can get to famed, clothing-optional Collins Beach by sea, because our pumpkin-patch Manhattan otherwise offers 20,000-plus acres of painful commuting via automobile.

What it's named after: French dairyman Laurent Sauvé, whose name we refuse to spell correctly, even though we totally know it.

Six Urban Hikes (and Bars for After) | Drink, Smoke in the Park

Explore the Islands of the Willamette | Discover Your Favorite Skatepark