Here's What It's Like To Experience a Lakota Sweat Lodge Ceremony

The sweat leader grasped the gray, pock-marked lava rocks with a pair of antlers.

The main thing everybody wanted to know was whether I'd be naked.

The thing is, I didn't know—my first worry about the sweat lodge was not knowing what to wear. I had to figure it out soon.

In early June, I signed up for the Inipi purification ceremony at Breitenbush Hot Springs, a sprawling New Agey retreat that lies at the end of a gravel road flanked by thick forest about 20 minutes northeast of Detroit, Ore.

The steaming tubs and pools at Breitenbush are all nudist-friendly, and it's not unusual to find yourself in the lunch line next to a guy who's one loosely tied sarong away from exposing his ballsack by the buffet. But, as it turns out, sweat lodge participants are not merely encouraged to wear clothing, but required—in part to avoid distractions when a co-ed crowd is gathered for a session of intense prayer.

And so I found myself in nearly complete darkness, with only the orange glow of hot rocks to see by, sitting cross-legged in the dirt with sweat streaming down my back and soaking my cotton, sleeveless dress.

The only thing I knew about sweat lodges going in was that a few years ago, people had actually died in a ceremony led by a self-help guru in Arizona.

The orientation left just enough time for my fear to mount.

The tradition of the sweat lodge is thousands of years old and was practiced by many tribes, including the Inipi ritual of the Lakotas, our guide Nunpa told us. Nunpa didn't look like he was prepared for a sweat lodge while wearing coal-colored jeans and a gray Henley to match the ashen curls spreading across his shoulders. But he later changed into black shorts, revealing a body covered in tattoos and scars.

At the turn of the century, Native Americans were sent away to military-style facilities meant to strip them of their culture. Nunpa described the cutting of boys' long hair, and the prohibition of their native tongue. He learned the sweat lodge ritual only through his grandfather, who'd once tamed wild horses and been trained in the ways of his ancestors to became a "kind of medicine man" who could "command the clouds to part for the sun."

As Nunpa's prose spilled out, my cynicism began to melt away. Sure, the crystal- and tie-dye-clad, drum-toting hippies are what define Breitenbush as a resort. But all that dissolves in the steam of the lodge, a world away from the yoga classes and bathhouse. I felt humbled to be invited into Nunpa's world.

Most of my lodgemates sat in silence as we gathered near a crackling fire, waiting for the ceremony to begin.

The "sweat leader" sat on a log in front of the two dozen or so who'd registered for the ceremony, one leg slung over the other as he rubbed a bare, leathery foot. His nails were embedded with layers of dirt, suggesting a lifetime spent outdoors without shoes. Nunpa asked how many people were new to sweat lodges, and five others raised their hands. He urged us to consider what we'd like to hone in on once inside—healing, purification, requesting help for life goals, prayers for others. 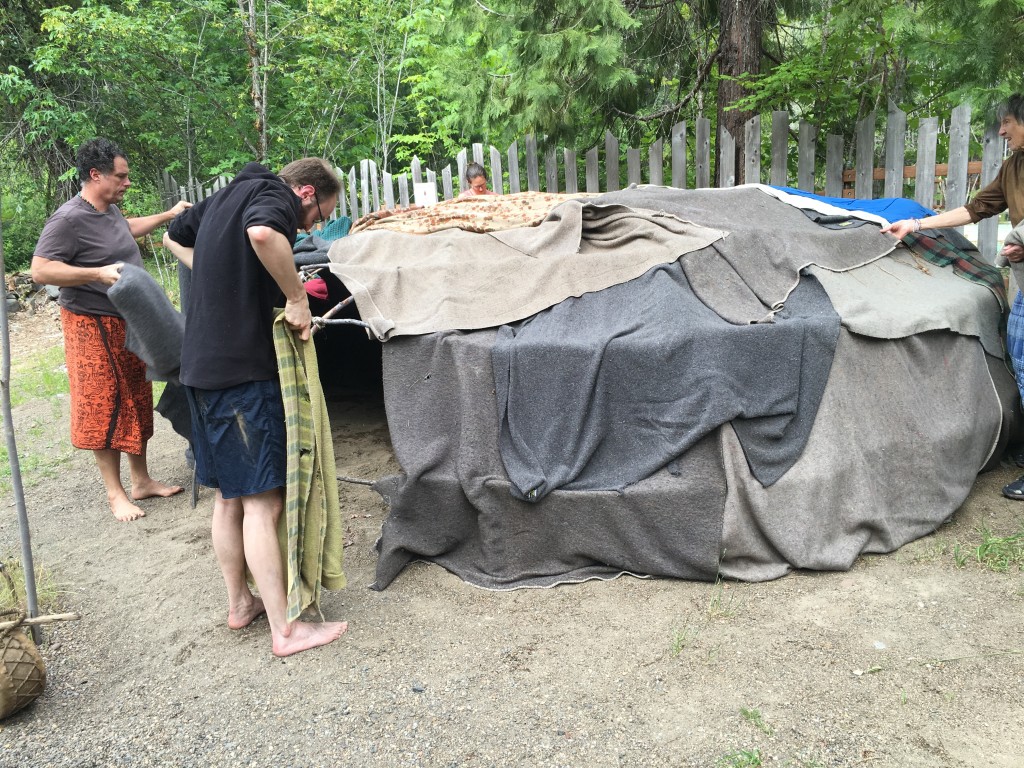 "This will give your mind something to focus on other than how hot it's getting—although that will happen sometimes, too," he said.

His casual, warm tone likely stems from his work with disillusioned youth. He said kids don't seem to believe in anything at that point—especially not God. And that's OK. The sweat leader simply tells them that if they don't have a focus, they "can pray to their big toe," he laughed, "and I've met some pretty strong big toes."

Not knowing what a sweat lodge looked like, I almost walked past it after rounding a corner at the river yurt, where "nonviolent communication training" was underway. I was picturing a sparse ranger station or summer camp meeting hall stripped bare. The spot marked on the map for "Sweat Lodge" had a fire, but no building. Then I noticed the bones of our sweat hut—thin, arched branches tied together with string to form a dome about 4 feet tall in the middle. Attendees put the rest of the lodge together, because who couldn't use a little team-building exercise with strangers before becoming best friends in a two-hour shvitz?

Penny, a slight, older woman with a broad smile and deeply creased face, was our "fire tender" and showed us how to cover the lodge's skeleton. She directed us to a stable of hanging blankets, then demonstrated how to arrange them clockwise, starting with a bottom ring. Everyone grabbed a cover and began layering and overlapping to ensure we'd be enveloped in complete darkness once inside. Two olive green tarps topped off the patchwork roof. 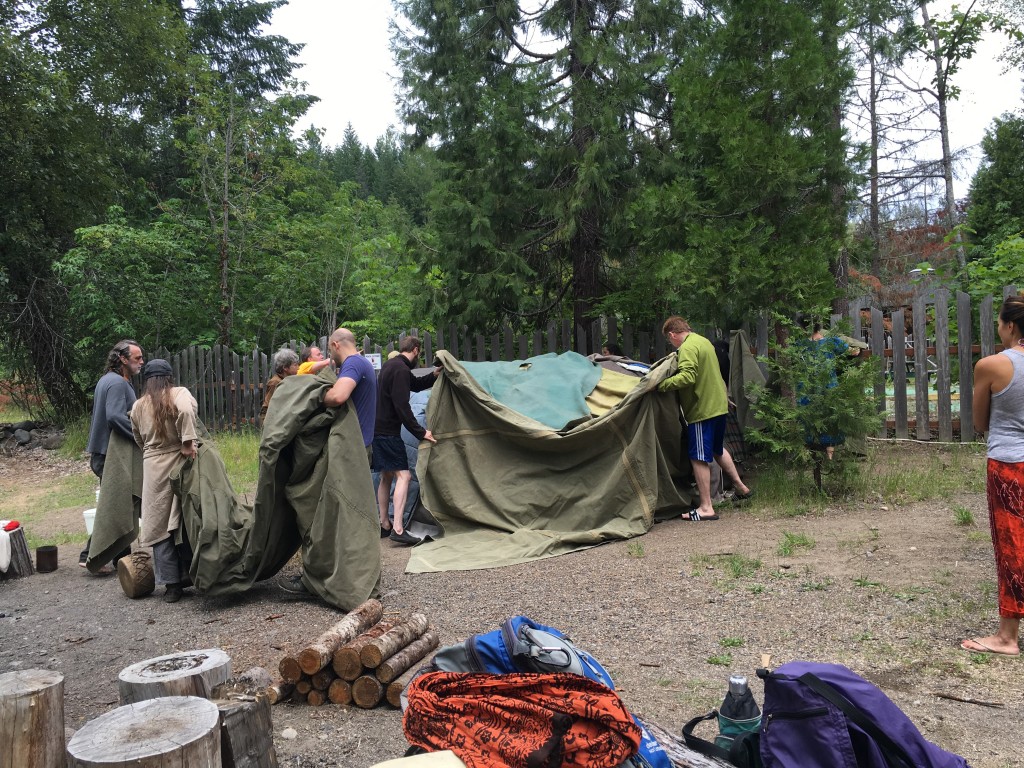 With the lodge built, we removed our metal and shoes to signify modesty as well as keep us safe—anything that conducts heat can lead to burns. Nothing "unnatural" could be brought with us, including water bottles, so I started to chug as much as I could in the remaining moments I had outside. Two women helped each other tie red string to their nose rings, jewelry that couldn't be removed but was symbolically acknowledged with the strands.

Nunpa led a single-file line—women first—clockwise around the outside of the lodge to a small opening in the blankets. I looked back at a row of bare-chested guys, including my friend Paul, who'd wisely shed his Dri-Fit top after unequivocally stating he'd be keeping his shirt on. "Once I saw the veterans all taking off their shirts, I figured I'd better too," he said.

The women in front of me began to crawl into the shelter. When I was "on deck," Penny held up a smudge pot so I could waft smoke toward my face. Another person dipped through the opening. I was next. Lifting my arms, palms upturned toward the sky, I closed my eyes and turned to pay respect in four directions. Bending down, I entered the womb. Nunpa welcomed me with "Hokh! Mitakuye oyasin," which means "Yes! All my relatives."

I shuffled to the back row and sat in the cool dirt. The lodge filled with two circles of people around a shallow pit in the center—we were elbow to elbow, knee to knee. Nunpa claimed he'd once fit 70 people in the cramped space. I was thankful there were less than 30.

The fire tender fished large, rounded rocks out of the flames with a pitchfork and brushed off the embers before thrusting them through the front flap.

He grasped the gray, pock-marked lava rocks with a pair of antlers and placed them in the depression. One man was given the chanupa, a ceremonial pipe, to tap the stones. A woman then sprinkled herbs onto the growing pile that popped and crackled when they hit the piping-hot surface, releasing an earthy scent of sage and occasionally causing the eruption of a small flame.

As the room got warmer, I kept careful count of the stones being added at a plodding speed while my adrenaline began to race. Nunpa ordered Penny to close the door. I made eye contact with my friend Paul once more—exchanging a look of "good luck" before I lost sight of his face in the dark. The sweat leader began to sing and keep rhythm on a drum, encouraging others to join in. Voices faltered at first as they tried to follow the Lakota hymn for which there was no book, but eventually the singing grew stronger and hit a stride. I tried to get out a warble but choked on the hot, thick air. A sizzle rose above the song when Nunpa poured water onto the seven stones. Breathing through my nose burned and became impossible. How long would this last? Anxiety started to build. I forced myself to stay, and after what felt like maybe 30 minutes, Nunpa had Penny open the door for a break. I'd never been so thankful for a tiny rush of fresh air.

Before the second sweat, one woman announced she needed to leave, and I considered following her. Instead, I hunkered down for what turned out to be four rounds. With each session, the heat grew more intense. Nunpa requested "seven stones," then "four stones," and then "three more stones." I eventually lost count and bent my head forward toward the ground, gulping for something other than the suffocating atmosphere.

Slow, concentrated breaths kept me going as my arms and shoulders felt like they were on fire and a mixture of condensation and sweat flooded my eyes. I needed a "big toe" to take my mind off the searing heat, so I began to think of the horses that danced for Nunpa's grandpa and the beauty of that scene—a black one, a palomino, a yellow one and a white one—all prancing in unison. I finally settled into the heat and looked past the momentary pain.

After about two hours, we emerged from the lodge damp and smiling. After exiting, we joined a sort of receiving line to shake hands with all of the sweatmates. It wasn't unlike the end of a Little League game, when everyone high-fives to the cadence of "good game." People toweled off and brushed away the dirt that clung to moist legs before joining a talking circle. There was deep relief.

"It's a hard way to pray," Nunpa said. And I did not disagree.

The Six Best Swimming Spots in the Columbia River Gorge

Something To Do Every Single Day This Summer

A Brief History of Mexican Cocktails

Hike These Six Bite-Sized Chunks of the Pacific Crest Trail

We Ate at 27 Taquerias in East Portland and Gresham. These are the Best.