Some hotels in the state have been booked for almost three years in anticipation of the moon being directly between the earth and sun for the first time in the continental United States since 1979.

The eclipse will last about two minutes and pass through eight states beginning in Oregon and exiting in South Carolina. There is a 340-mile swath through the middle of our state starting around Depoe Bay and continuing through central Oregon until it leaves around Ontario.

The sweet spot will miss Portland, Eugene and Bend (although the city folk will still experience a partial eclipse). Nearly all hotels and most campgrounds are already reserved but campgrounds in US Forest Service areas can only be booked 6 months in advance and are still up for grabs.

PSA: Invest in a pair of eclipse glass because even during the Great American Eclipse looking directly at any part of the sun that is exposed is bad for you.

Here are seven spots to enjoy this celestial event (although really anywhere within the path of the totality will do).

The eclipse will first cast its shadow on the US on a rock outcropping just north of Newport, but the totality will be experienced throughout the central coast. Stop by any one of the scenic viewpoints or state parks between Waldport and Pacific City. Enjoy a picnic at Boiler Bay State Scenic Viewpoint or grab a beer on the deck of the Lighthouse Brewpub. Catching the sun's corona over the ocean is as romantic as it gets—but as always, a cloudy day on the coast is a very real possibility.

Is there anything that pairs better with astronomical anomaly than a nice red wine at 10 a.m.? This vineyard's eclipse event, which includes live music, "Pacific Northwest cuisine" (lol), and adult grape juice, will last until 6pm so the fun won't stop once the light returns.

If NASA's throwing a party, you know it's about to be lit. The hippest government organization around is teaming up with the Total Solar Eclipse to bring you Solarfest, an eclipse-themed festival at the Jefferson County Fairgrounds. For $45 you get a 4-day Solarfest Pass that includes camping at the fairgrounds, access to the festival entertainment events and even a glamping upgrade option. Whether or not this is one of the few festivals that will not have a guy in a headdress looking for a girl named Molly remains to be seen…but it will have helicopter rides available! Suck it, Sasquatch.

Big open skies, beautiful mountains, a beach and hopefully a smaller crowd than lit Madras. Enjoy the eclipse from your boat on Lake Billy Chinook with some silver bullets iced down in your Yeti 110 or on some of the picturesque trails throughout the park. All of the over 300 campsites for this park have been booked but is worth a day trip if you can find lodging relatively close.

All the benefits of the Cove Palisades but with more climbing bros on terrifyingly high slacklines. Yolo.

The Painted Hills and Sheep Rock are both geologic wonders  and this park has come up with a solar eclipse event poster I would like to hang up in my room. But most importantly this is a great opportunity to be supporting the National Parks Service which you should do any chance get.

The totality of the eclipse will pass directly over the home of the abandoned cement plant formerly owned by the Oregon Portland Cement Company that many have seen driving through Eastern Oregon. If you want your eclipse experience to feel as much like post-apocalyptic Oregon trail zombie movie as possible this is the place to be.

Wherever you go, just get outside and watch this thing. 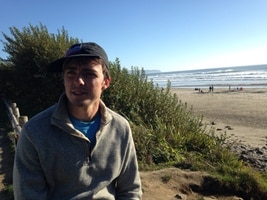 Born and raised in SEP. Tabor over everything.