The Legislature of the Territory of Oregon writes a letter to Congress announcing available rations for U.S. Navy ships looking to restock. The list includes breadstuffs, salt beef and pork, lumber and pitch, and then adds, "In connexion with this subject, it will be proper to mention that flax and hemp have been successfully cultivated in small quantities, and could be made articles of export, were encouragement offered."

Hemp carpet goes on auction at the Great IXL Auction at First and Yamhill. Pioneer jackboots do not kick in the front door the following day.

Vegetable fiber expert Felix Fremery assures growers: "The hemp industry in Oregon is going to be all right. We are not here with a scheme by which we would make money at the expense of the farmers' unrewarded labor; we come with handfuls of money to assist them...and at the same time reap reward ourselves." Portland banker Charles E. Ladd assures the growers their farming is assisting in the development of the country.

Charles H. Weitz, manager of the Minnesota Hemp Company, proclaims Oregon hemp the most promising new industry to The Oregonian. Weitz predicts the "Eastern capitalists" he represents will establish a large hemp mill in Oregon within the year, employing several hundred workers.

Mrs. Juliet Montague Lord, wife of Oregon Supreme Court Justice William P. Lord, leads a small group of women in opening a modestly sized commercial hemp factory. A fire quickly destroys the building, and another fire in the rebuilt works "put a stop to the enterprise and the enterprising women lost their money," reports The Oregonian.

The Oregonian trumpets âOregon Hemp and Flex Best of All,â âExperiments Give Promise of New Industries That May Prove Profitable,â and âBig Future Predicted.â Engineer Mr. Bosse of the Klamath Falls Improvement Company claims Oregonâs hemp fiber the finest in the world, proclaiming Oregonâs weed âequal to the best Italian.â

Paul Welter and Jose Flores are arrested by state police for growing two tons of "Indian hemp," which The Oregonian calls "a Mexican weed with mild narcotic effects when smoked." The plants are described as well-cultivated, and as tall as corn. Welter serves only 60 days of his sentence after claiming he didn't know he'd been growing cannabis.

1935 Salem: Prohibition!
The great and awful change comes to Oregon. Oregon adopts the Uniform State Narcotic Drug Act, and the dark shadow of marijuana tradition falls across the land.

Police arrest 72-year-old Earl Bray on marijuana possession after a neighbor reports a brambled garden of weed. Bray claims the plants growing in his yard are actually Jerusalem artichokes. After confirmation from three botanists and The Oregonian's garden reporter, the plants are confirmed as artichokes and Bray is exonerated.

LSD pioneer Timothy Leary lectures at Portland State, encouraging attendees to tune in, turn on and drop out. An undercover police officer reports an attendee asking Leary if he'd like to "butt some sticks," which sounds like slang a cop would use. Police Chief Robert L. Steele, incensed at the flagrant advocacy of drug use, subsequently orders raids on blacklighted hippie enclaves in Southwest Portland. Fifty-two "Bohemians" are arrested and 8 kilos of weed are nabbed.

Ken Kesey returns to his family home in Oregon after doing jail time for marijuana possession in California. Before submitting to authorities, Kesey tried to fake his own death and fled to Mexico to evade prosecution.

Fearing violent anti-war protests sparked by a visit from President Nixon, Gov. Tom McCall supports the only state-sponsored hippie music festival in U.S. history. An estimated 100,000 people attend Vortex I: The Biodegradable Festival of Life at Milo MacIver State Park, an event later referred to as "The Governor's Pot Party." McCall referred to it privately as political suicide, but he would win re-election handily.

After jamming hard to "Fire on the Mountain" at a Grateful Dead concert, ex-Trail Blazer Bill Walton persuades a pilot to fly his plane into the smoking ruins of Mount St. Helens, which had erupted just weeks before. According to Walton, Air Force fighters were scrambled to shut the flight down.

The first packets of "marijuana cigarettes" are delivered to four Oregon hospitals: Providence and Good Samaritan in Portland, Columbia Memorial in Astoria, and Rogue Valley Memorial in Medford. The marijuana is intended for research on the effects of THC in curbing nausea in cancer patients.

A starry-eyed young hustler named Cylvia Hayes gives up her dreams of operating a marijuana farm in Okanogan, Wash., and moves to Central Oregon. She would eventually become Oregon's first lady. Never did get that pot farm going.

Oregon's most influential pot activist, Jack Herer, dies after suffering a stroke during a rousing speech at the World Hemp Festival. Herer, owner of the Hawthorne District's Third Eye Shoppe, authored the 1985 book The Emperor Wears No Clothes. The book, which sold 600,000 copies, identified the ultra-rich Hearst and du Pont families as the powers behind marijuana prohibition.

An Oregon State Police SWAT team and the National Guard descend on an outdoor grow run by Mexican nationals in a remote corner of Wallowa County. The bust is the biggest in Oregon history, netting 91,000 plants.

Longtime outlaw growers meet to form the Oregon Sungrown Growers Guild. They express wariness over the loss of their "way of life."

The Triumph Return of the World Famous Cannabis Cafe

What You Need to Know to Grow | A Directory of Dispensaries 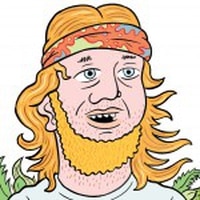