Portland Art Museum's current exhibition, Poetic Imagination in Japanese Art showcases work spanning a millennium with pieces dating as far back as 750 AD to the most recent from 1961.

The collection offers over 100 paintings and works of calligraphy collected over forty years by Mary and Cheny Cowles and curated by Maribeth Graybill, to present a unifying theme of visual art closely tied to poetic traditions.

To add to viewers' experience, the museum is offering an array of programs to create a deeper understanding of the work, and to spark poetic and artistic inspiration in viewers.

Occasional weekend events will feature a variety of calligraphy and ikebana demonstrations, music performances, poetry reading and writing opportunities, artmaking, and even the chance to sample Japanese small bites and sweets from local makers.

The exhibition is organized into four themes between the eight and 20th centuries: Waka and the Courtly Tradition–rooted in Japanese waka poetry and the classical culture of the ninth through 12th centuries; Ink Painting and the Zen Milieu, based on Chinese poetic themes initially taken up by monks and later adopted by professional painters in medieval Japan; Literati Culture, in which neo-Confucian philosophy, painting and poetry by scholar-amateurs of the Ming period (1368-1644) became a powerful form of self-expression and group identity; and Modern Innovations in which artists found ways to transform traditional techniques to create personal styles while simultaneously resisting and exploring western influence.

Some pieces, such as the 15th century scroll, Bai Juyi Questions Zen Master Bird Nest, by Ikkyū Sōjun's are devoted entirely to calligraphy. The brush strokes and figures capture a fascinating and telling visual beauty of their own.

But the more affecting pieces often combine both the visuals of traditional painting and ink drawings with the ornate calligraphy.

An excerpt from an album of calligraphy by a retired emperor, Goyōzei (1571–1617), offers poems written over paper decorated with abstract and natural motifs in gold and other metallic pigments. The calligraphy sits amongst the images of cherry blossoms, leaves, landscapes and clouds as they were natural parts of the setting, like flowers, birds and trees amongst the sepia-toned world about them.

Another example of the disciplines of poetry, calligraphy and painting melding as one is in Waka Poem by Kakinomoto no Hitomaro as rendered by Shōkadō Shōjō, one of the finest calligraphers of his time. The poem is brushed on paper decorated by Tawaraya Sōtatsu. The result brings to mind autumnal flowers pressed within the pages of a diary.

The portrait of a famous courtesan known as Moshio reading with calligraphy attributed to the courtesan herself dates from the mid-17th century. Scrolls such as this and Quiet Residence in a Bamboo Grove, from 1450 by another unknown artist are presented with space for the calligraphy at the top of the scroll, with the detailed imagery toward the lower half.

In later pieces, the artwork becomes more refined but also more dominant in its presentation, taking up more of the space, while the details become sharper and more elegant, as in Red-Breasted Parakeet on Willow with Roses by Sō Shiseki (Japanese, 1712¬–1786), which shows an exquisitely detailed bird resting upon a branch which traverses the scroll's full length from the upper left corner to the bottom right. In Old Plum by Tokuyama Gyokuran (Japanese, 1727/8–1784), the branch of the tree reaches across a six-panel screen like a river seen from above on a topographical map.

In Green Mountains, White Clouds, an example of the literati style, by Tanomura Chikuden (Japanese, 1777–1835) two scholars chat and laugh on a ledge by a waterfall, which runs the entire length of the scroll, cascading down through a cloudy mountain to a river below.

"While those deeply familiar with Japanese culture will appreciate the literary allusions in these works, all visitors will be able to savor their evocative beauty," says Graybill, the museum's Curator of Asian Art. "This is an exhibition that invites contemplative looking and emotional response. We hope that viewers will be inspired to compose their own verses about what they see and feel."

The most modern piece on display is Shout, from 1961 by Inoue Yūichi (Japanese, 1916–1985). Using frozen ink on paper, the artist applies almost crude black brushstrokes, particularly in comparison to the historical pieces on display, against a pale background to spell the Japanese word "katsu!" the shout of a Zen master when he strikes a student who is dozing off.

The programs scheduled around the exhibition are appropriate for all ages and are created to provide both inspiration and a greater understanding of the themes and creative processes represented in the exhibition.

The exhibit is up now until January 13, 2019. The museum celebrates a community free day on November 17. An international team of scholars who contributed to the exhibition will be on hand for a symposium on December 7 and 8. A schedule of events can be found at portlandartmuseum.org. 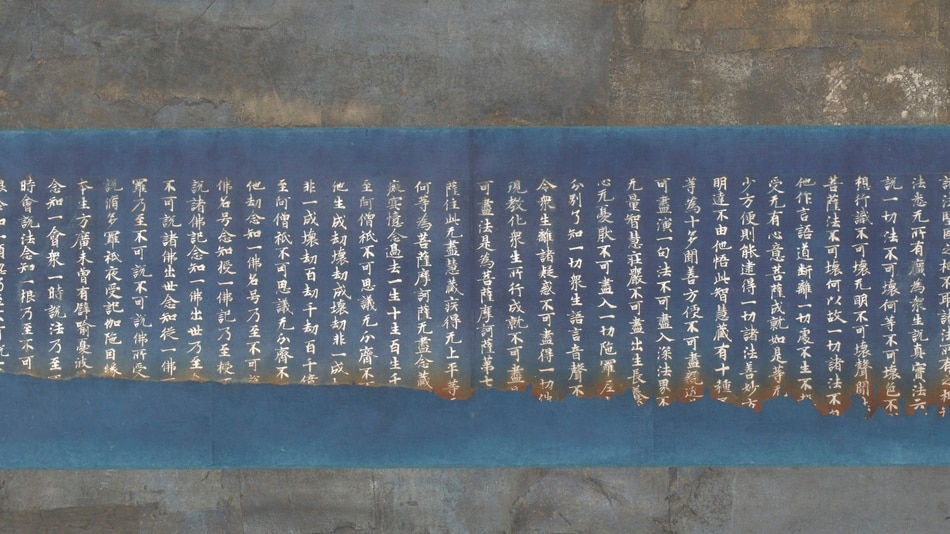 Tōdaiji Scriptorium, Fragment of the Avatamsaka Sutra: The Nigatsudō Burnt Sutra, 744, handscroll fragment mounted as a hanging scroll; silver on indi
2 of 16 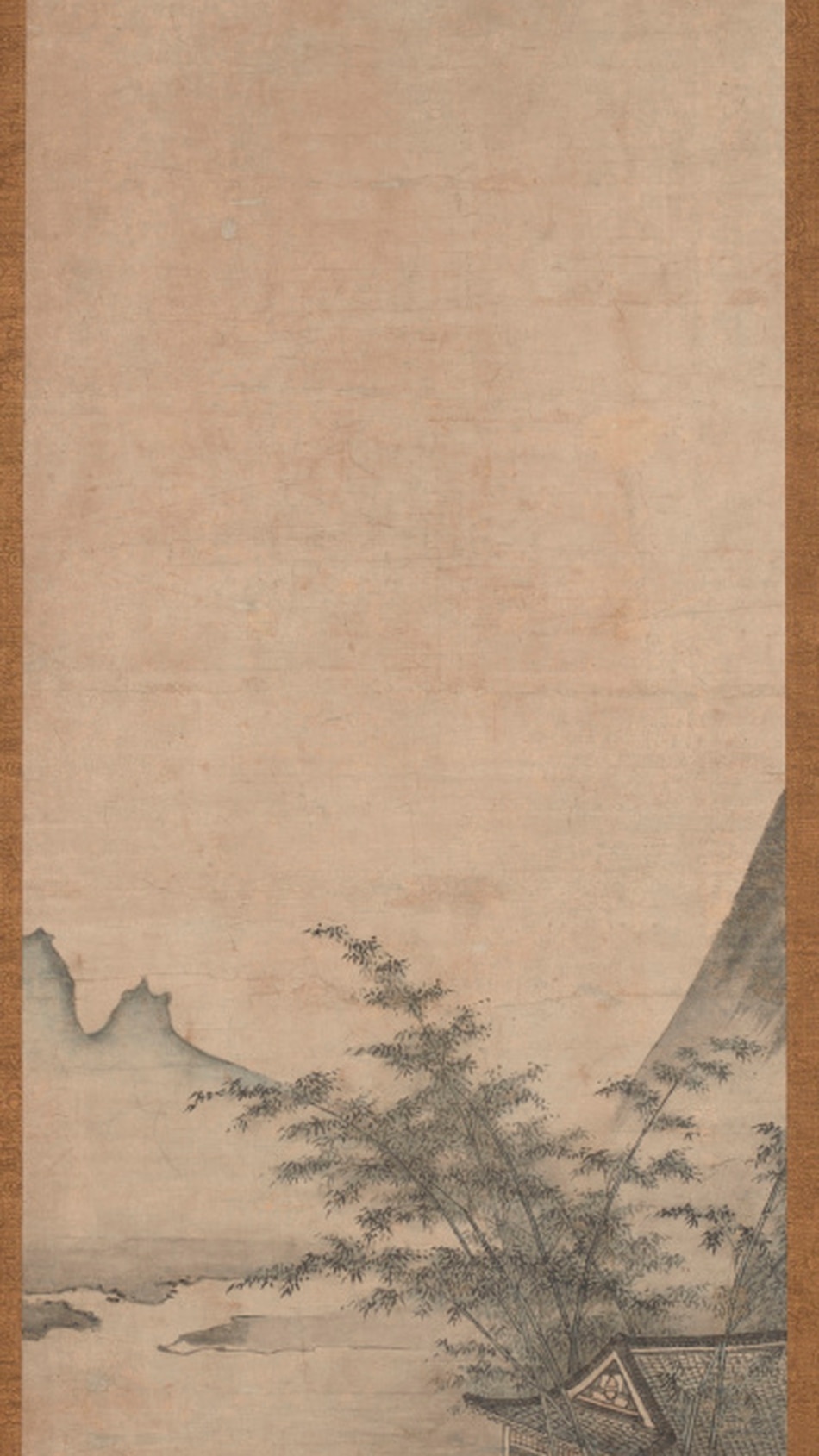 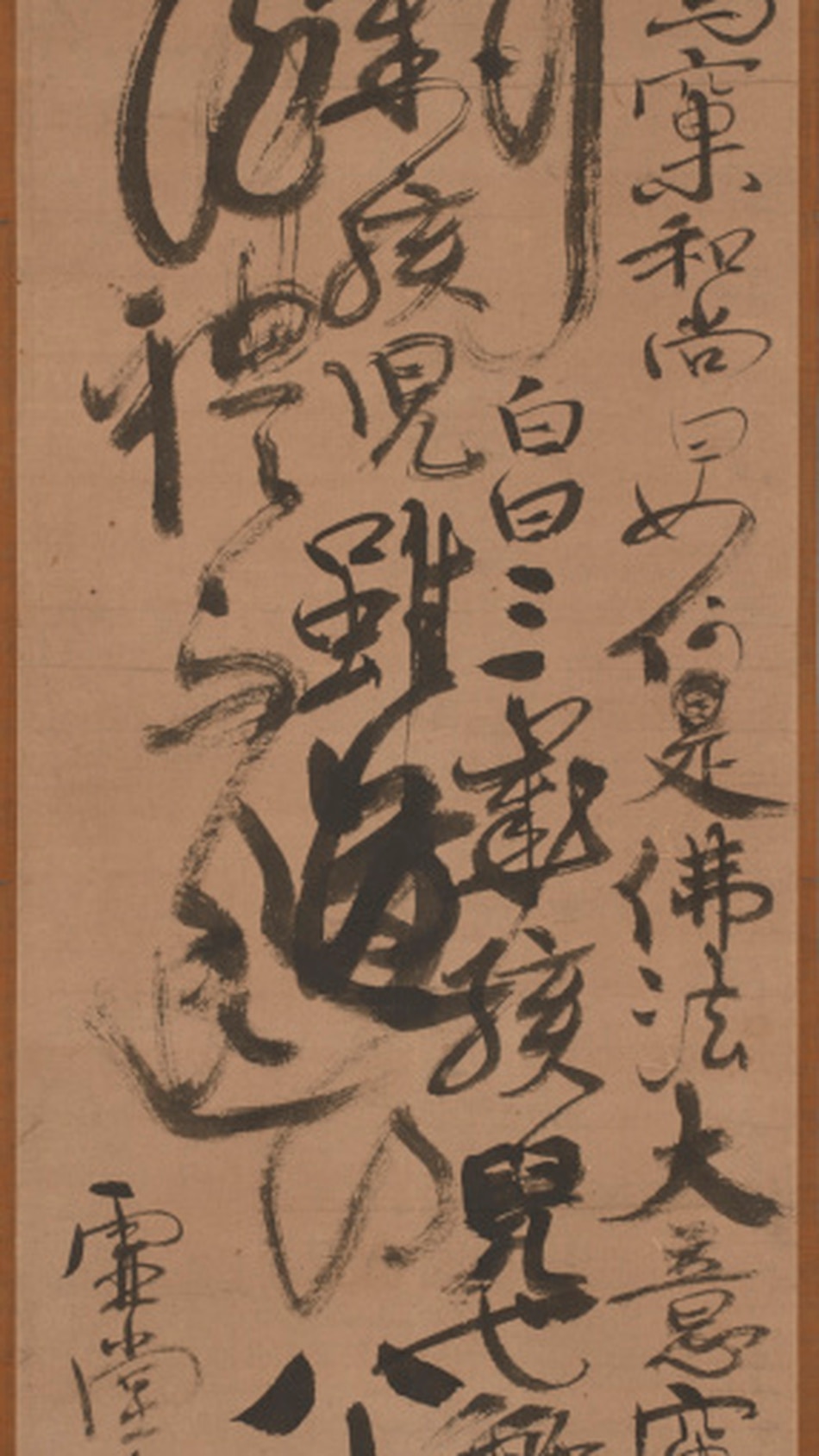 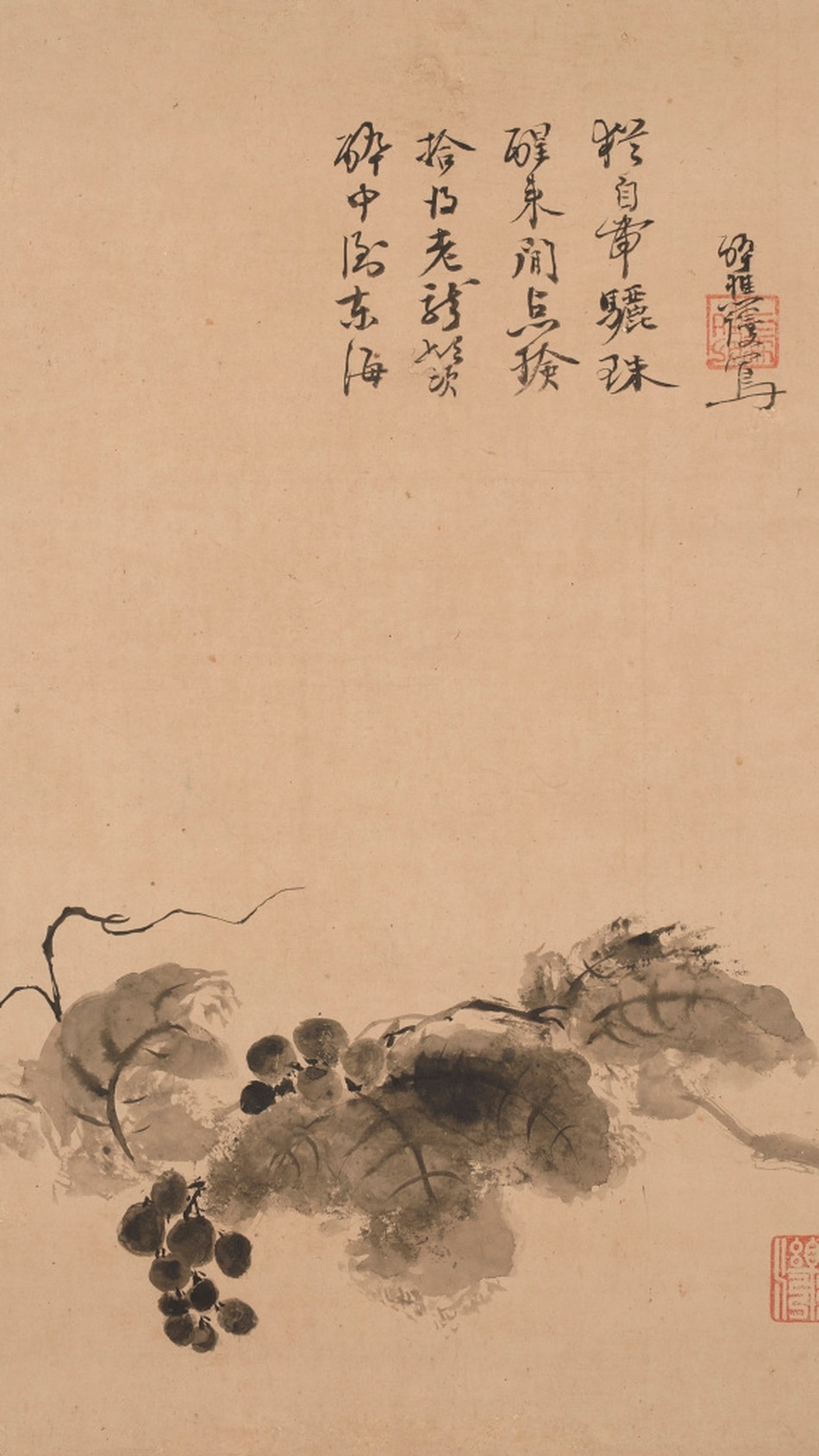 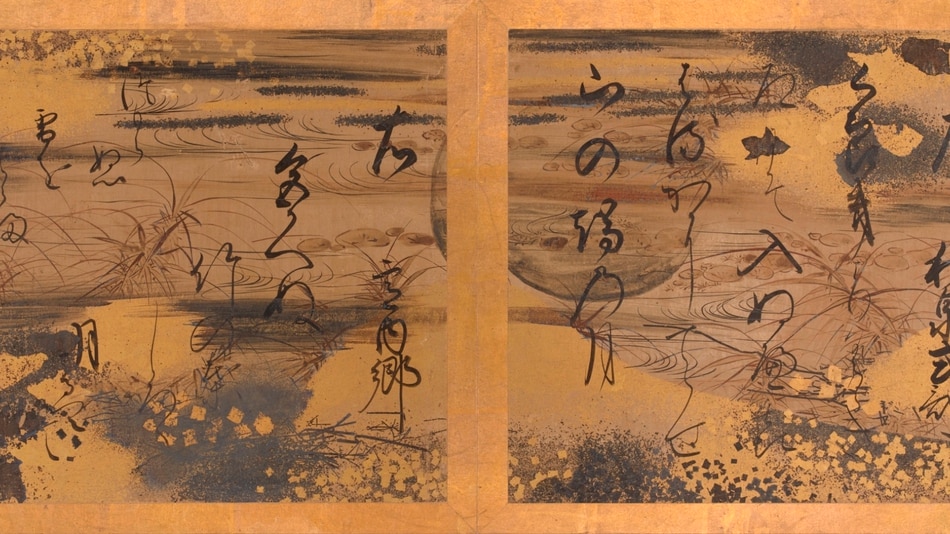 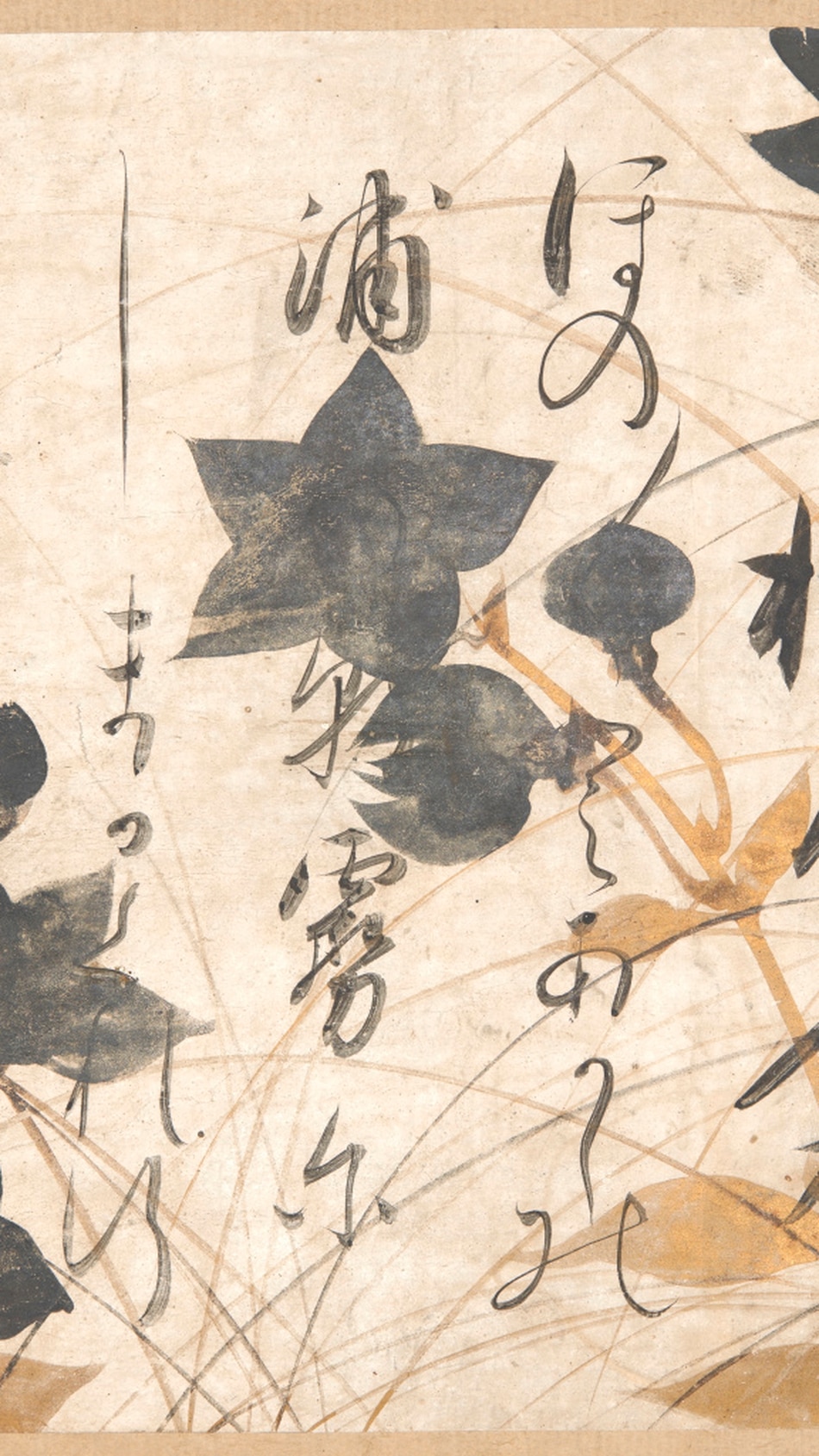 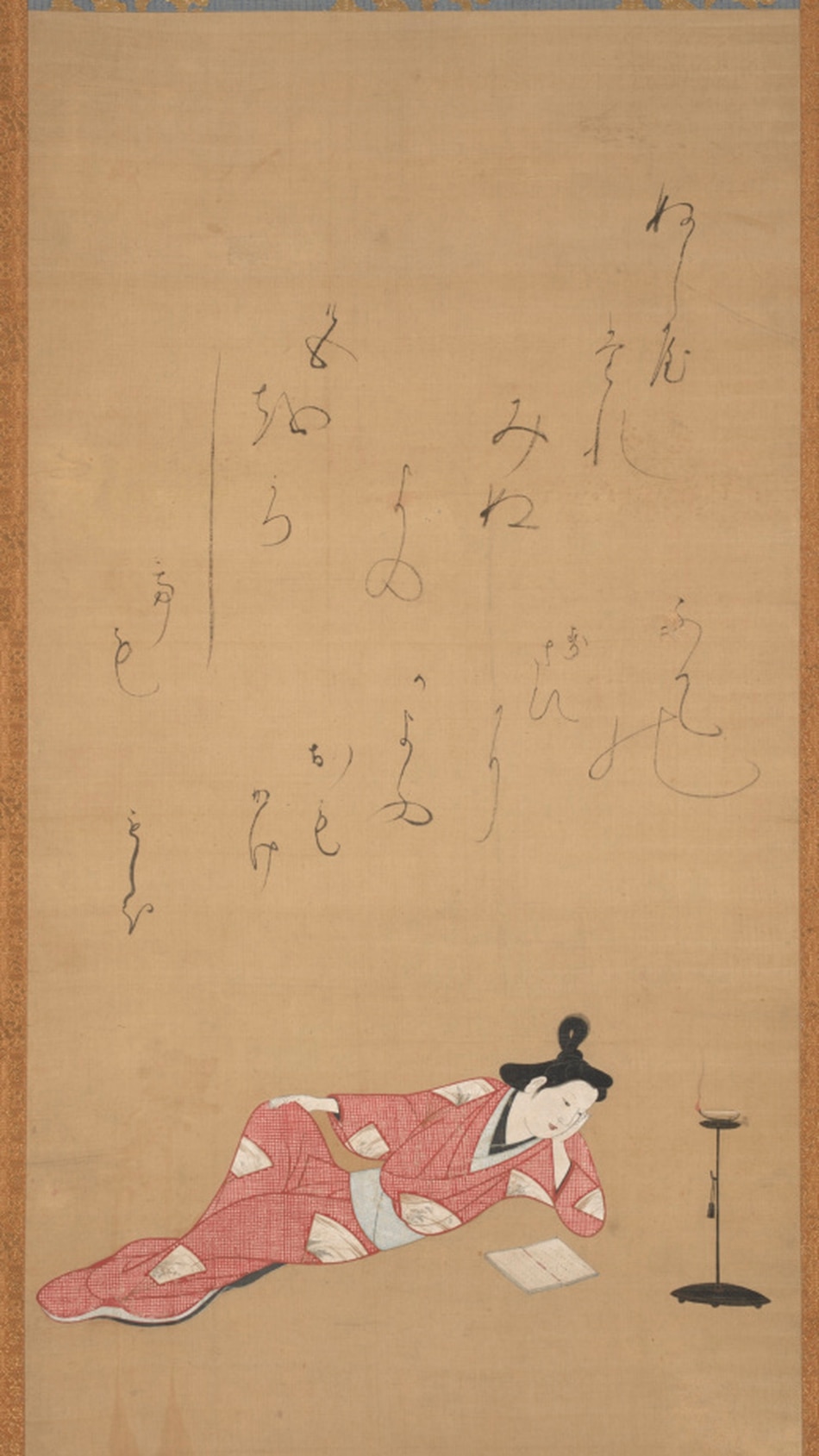 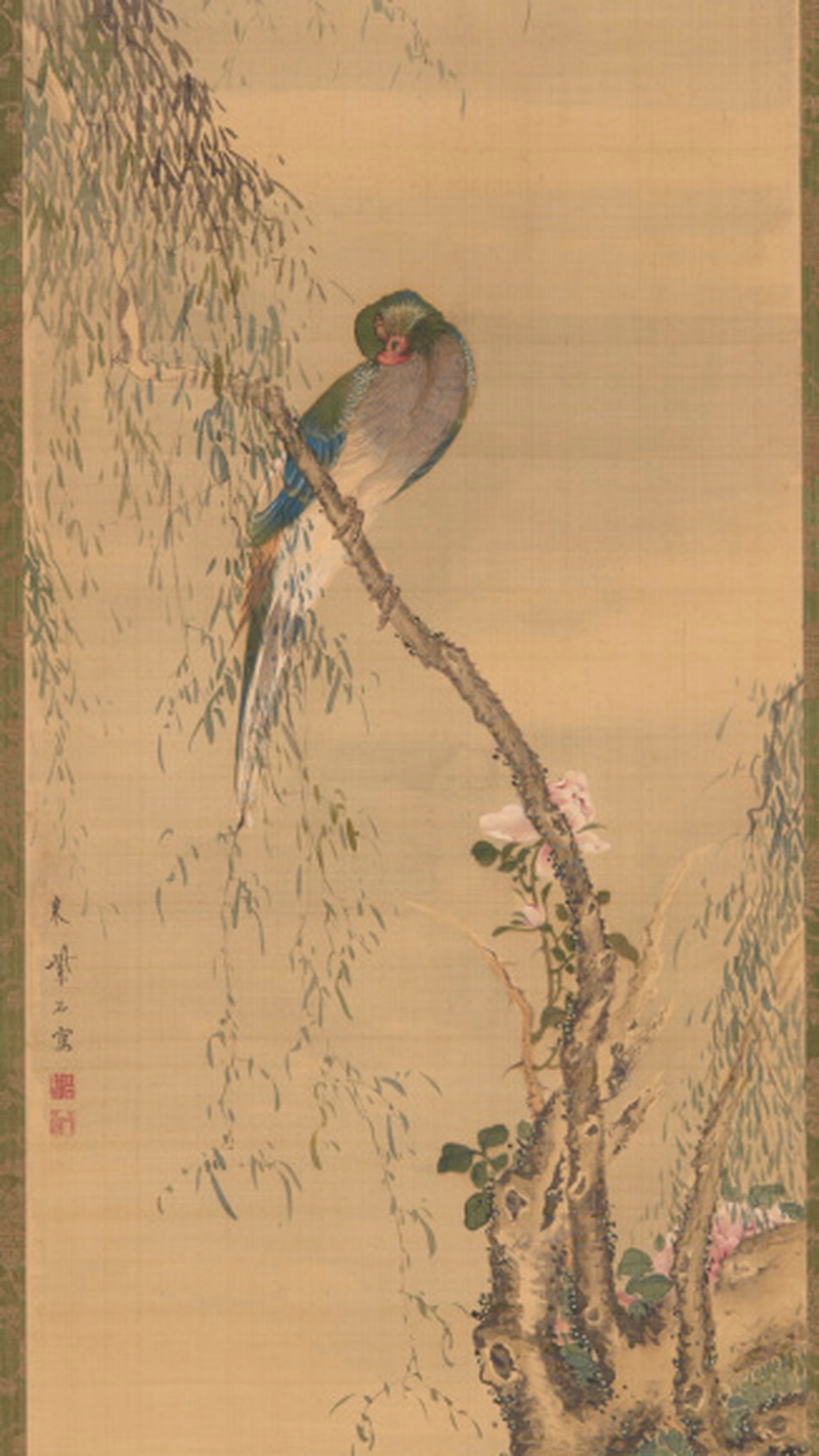 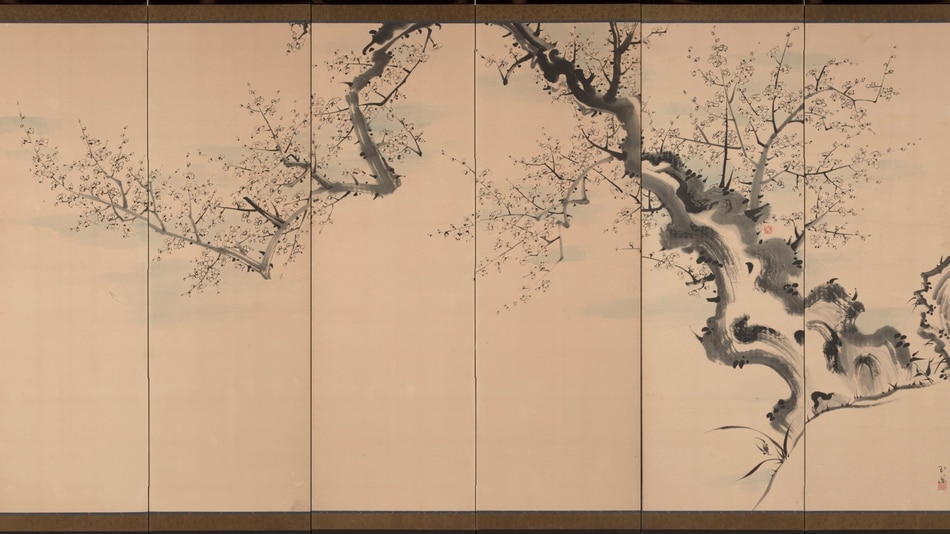 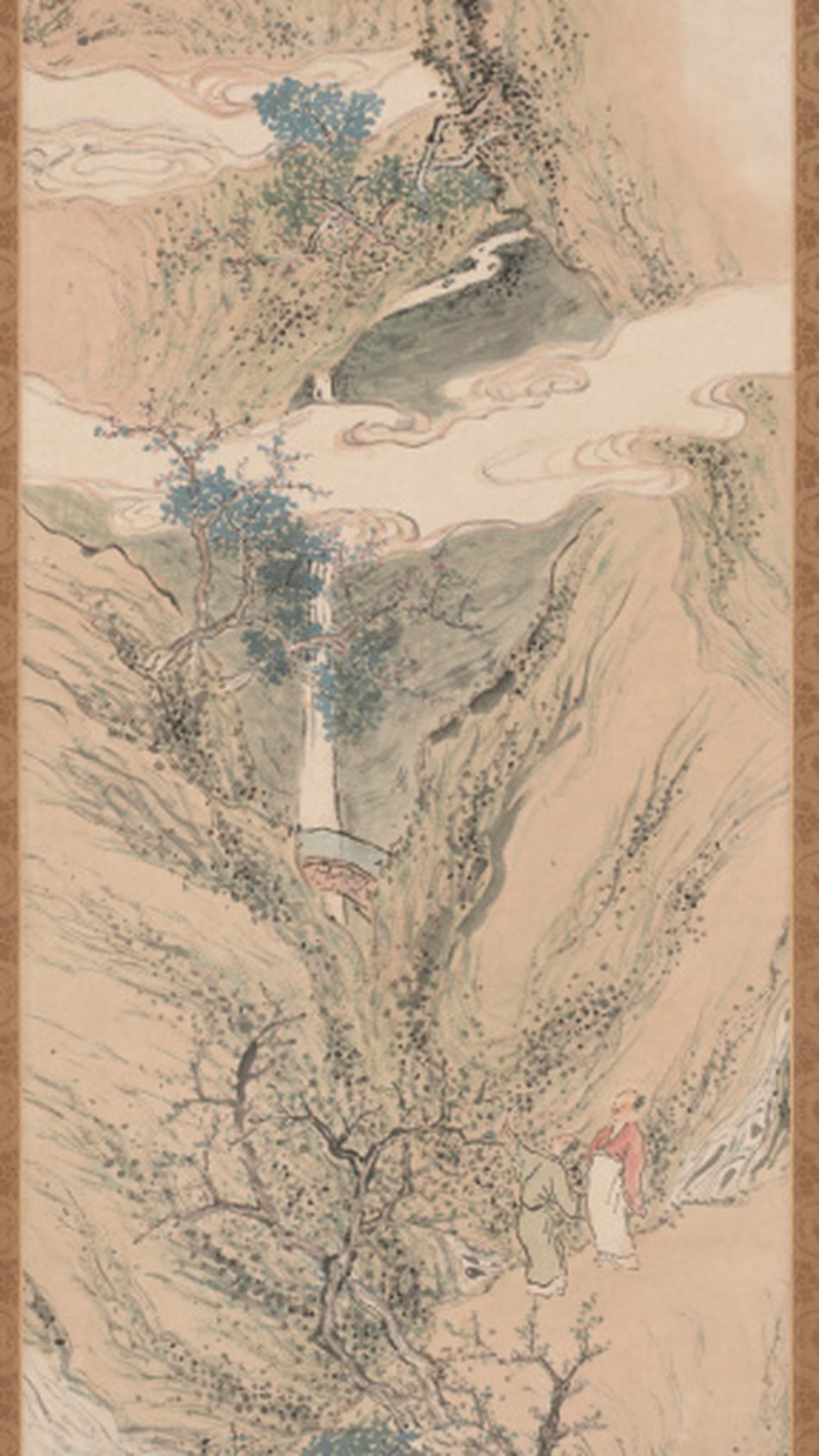 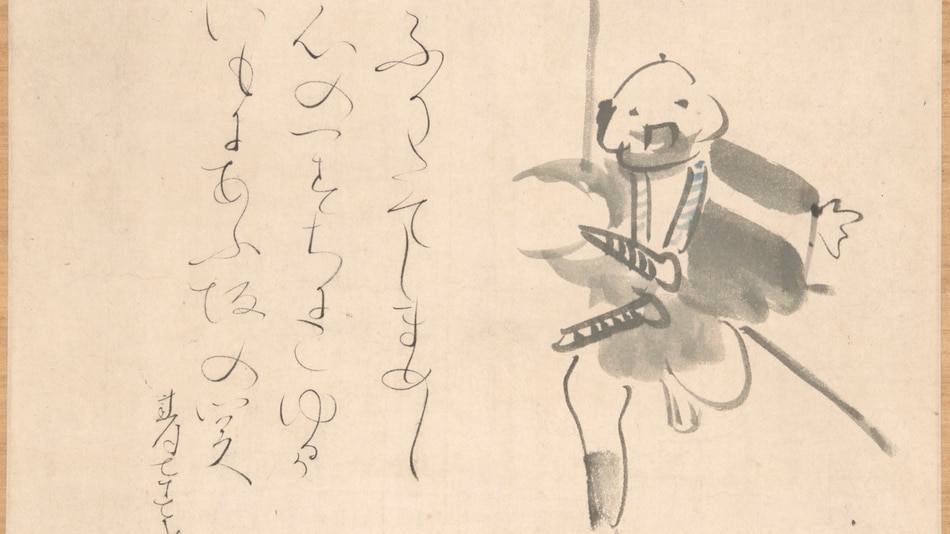 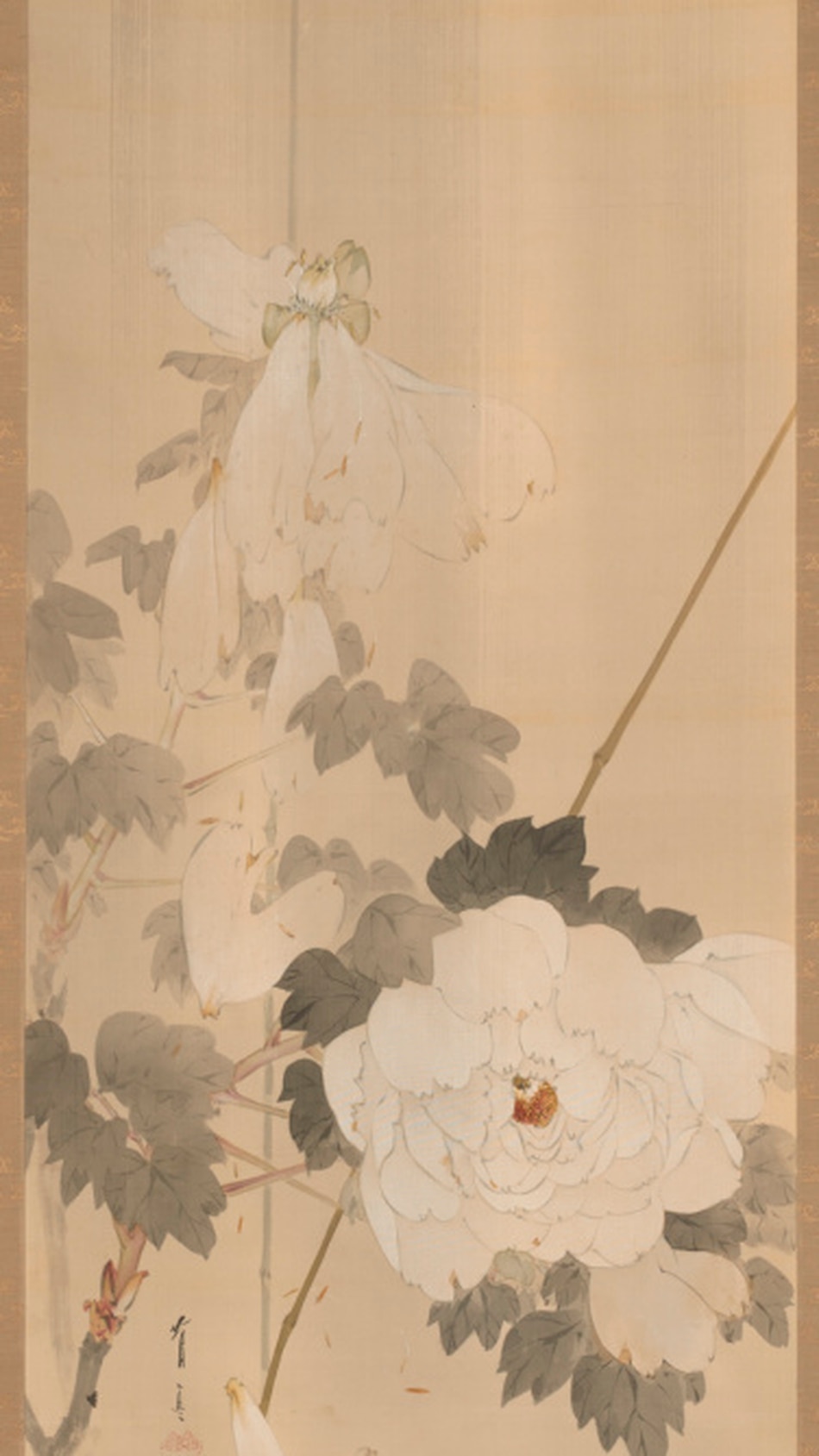 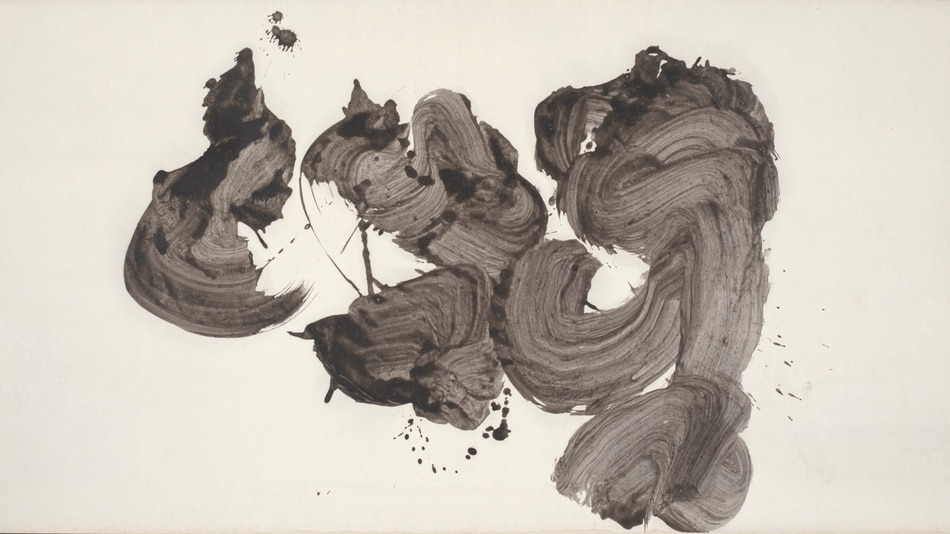