Imperial: The 2015 Restaurant of the Year

How a legendary Portland chef and a swaggering kid from Texas finally nailed Portland cuisine on a big-city scale. 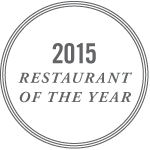 If you hopped in a time machine and asked Doc to deposit you at the moment when Portland's current food scene was born, you'd end up at Dec. 13, 2008.

On that day, the most ambitious restaurant in Portland history closed after only seven months. Lucier's palatial dining room in the South Waterfront cost $4 million to build out and had a two-story glass wall and wee canal crossing the floor. But at the height of the Bush recession, locals wouldn't bite on $25-per-ounce wagyu beef and a 30-page wine list. The steel and glass husk still sits empty.

A surprising legacy of Lucier: If you ask around, you'll be amazed how many of the city's top chefs toiled in its opulent kitchen. The naked ambition of the project attracted young talent like a black hole. When it exploded, chefs like Maurice's Kristen D. Murray and Ox's Greg Denton were scattered into a brutal job market—having learned what didn't work, they launched their own projects.

On the day Lucier closed, just like the day it opened, a 24-year-old kid named Doug Adams was washing dishes.

"It gave me a very bizarre view of Portland," Adams says. "I don't think they really had any idea how a restaurant like that should work. It was like they opened the French Laundry cookbook and were like, 'Let's open a restaurant.' But for a kid who'd just moved to town, it was a networking dream."

Standing 5-foot-1 and hailing from an East Texas town of 800 people, Adams moved to Montana for college, dropped out, played in a bluegrass band and learned to cook on the brunch shift at a college town bar and grill. He moved to Portland to attend the Western Culinary Institute, dropped out, and landed a job washing dishes and plating pastries.

Seven years later, Dougie Adams is the head chef at our 2015 Restaurant of the Year.

Imperial finally delivers what Lucier promised: high-end dining on the grand scale Portland hasn't seen done so successfully in a long time. As always, this honor goes to a restaurant that best defines the year in Portland dining. We're in an era of scalability, with some Portland restaurants spinning off to other continents while others struggle to grow concepts from carts and pop-ups to big-time restaurants with padded chairs and proper chandeliers while maintaining their spirit. Imperial does it better than anyone.

"We're trying to break the mold for what a restaurant this size can be," Adams says. "And it's difficult. I get calls from purveyors where it's like, 'We can't get that for you, we just don't have that much stuff.'"

Imperial's dim, cavernous dining room opened in 2012 under chef Ben Bettinger, now at Laurelhurst Market. It's owned by Vitaly Paley, whose eponymous Place on Northwest 21st Avenue is credited, along with Higgins, with creating the city's food culture in the mid-'90s. Early on, Imperial's Southern-tinged Cascadian fare was a disappointment. My first review criticized dishes like a country-fried rabbit that was "a greasy chore" resembling something Granny Clampett made "to finish off a little extra batter."

Under Adams, who grew up in the swampy Pine Curtain due west of Shreveport, La., that rabbit dish was replaced by one of the best fried chicken dishes you'll ever eat. It's still served with barrel-aged hot sauce and honey from beehives on the roof, but the bird now drips with juices inside a golden-brown and buttery shell that crackles like paper under a fork.

Adams is not precious about the dish: "Fried chicken is my favorite thing to eat in the entire world. I just goddamned love it.". 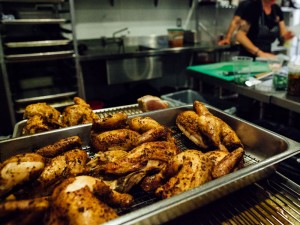 Imperial's menu begins with always-incredible Parker House rolls that have a crisp shell, which pops like a balloon, and a gobsmacking ponzu-spiked poke salad. By the time you get to perfectly prepared flat iron steak from the crank-up wood-fired grill, you're seeing stars.

"I've always felt like this space was Americana," Adams says. "It's something Vito mentioned when we opened, and it's something that when I took over we both really wanted to bring out. When you look at my menu, you see carbonara. There are certain things we can sorta get away with borrowing. Classics that a big, downtown restaurant should have—really approachable, crave-worthy."

Adams had another notable apprenticeship too. Just after he was promoted, he was picked to appear on the reality show Top Chef. He spent nine weeks in Boston, mostly waiting to be filmed in competition, but also getting personal critiques from some of the world's best chefs. When he returned, Adams promptly turned Imperial into one of the most consistently excellent restaurants in town.

That's all the more impressive given that Imperial sits on the ground floor of Hotel Lucia, where it serves food a minimum of 15 hours a day, seven days a week. Oh, and Imperial also caters a huge number of events, does the most large food festivals and plans special events, like a beer dinner where Adams served a massive elk shank braised in wildly expensive farmhouse beer—we gnawed every last bit of meat away like a bony 25-cent wing.

"One of the hardest things is that we have this huge restaurant with all these things going on, but it's still Vito, so we're making mortar-and-pestle aioli one course at a time," Adams says. "That's what makes it so special. We'll do these lunch banquets where it's essentially a sandwich buffet. And so we smoke all the ham in house, we brine all the turkeys and smoke it, we make all the bread in house."

For sense of scale: On a busy weekend night, Paley's Place might serve 130 people. Dinner at Imperial will be double that, plus an 80-person banquet, plus 120 for lunch and a couple hundred more for breakfast. Between his original location, Imperial and the attached downtown diner, Paley is now managing a team of nearly 100 people.

It's something Paley took a while to warm to: "After 18 years of Paley's Place, for me, it was either a rocking chair or a new restaurant."

But he wanted to finally give Portland the "big city" downtown restaurant it needed. So Paley launched Imperial. And 20 years after receiving WW's 1995 Restaurant of the Year nod for his original place, Paley earns it again.

"On a small scale, it was always easy to cure your own bacon and make mortar-and-pestle aioli, but how do we scale it up and do it?" Paley says. "We're definitely bucking a trend. We were told, 'You guys are crazy—you just won't be able to keep up.' But we are."

Keeping up is a team effort. Imperial's cocktail menu was designed by Brandon Wise, one of the city's most talented mixologists before he took a corporate gig in Denver; it's now overseen by the stellar Tony Gurdian. Imperial general manager Garrett Peck, formerly of the Heathman, never seems to forget a face and is one Portland's few front-of-house staffers who can be counted on to get you out to a play on time.

In a city that's become so enamored of precious, 12-seat, three-hour dining experiences reserved six months in advance, it's refreshing. As Adams tells staffers cooking brunch, be fast and be good. "They come in, they're hungry, they're hung over, they want their food," he says. "If you hit 15 minutes, they're done. Just let your ego go, dude. It's not about us. Just get the food out."

That, of course, goes back to Adams' days in Montana, where he cooked alongside Andrew Mace, his best friend, who now runs the kitchen at Portland's best overall restaurant, Le Pigeon, when Gabe Rucker is otherwise indisposed. Yup, there was a time when chefs at Imperial and Le Pigeon were working the same line, making omelets for hung-over college kids.

"That's where I got all my speed," Adams says. "We would just get murdered. We had no training, but we were really, really quick. I tell all my cooks: Do brunch. If you can cook an egg—with a bunch of different temperatures, with a bunch of different techniques—if you can do that flawlessly for 300 people, you're going to be a lot better off when you get on my grill and it's a rib-eye."

It'll also break you of the habit of reaching for tweezers.

"I make fun of my cooks if they use tweezers in my line," Adams says. "I'm very much a country boy at heart."

Browse the directory of all our favorite restaurants this year. 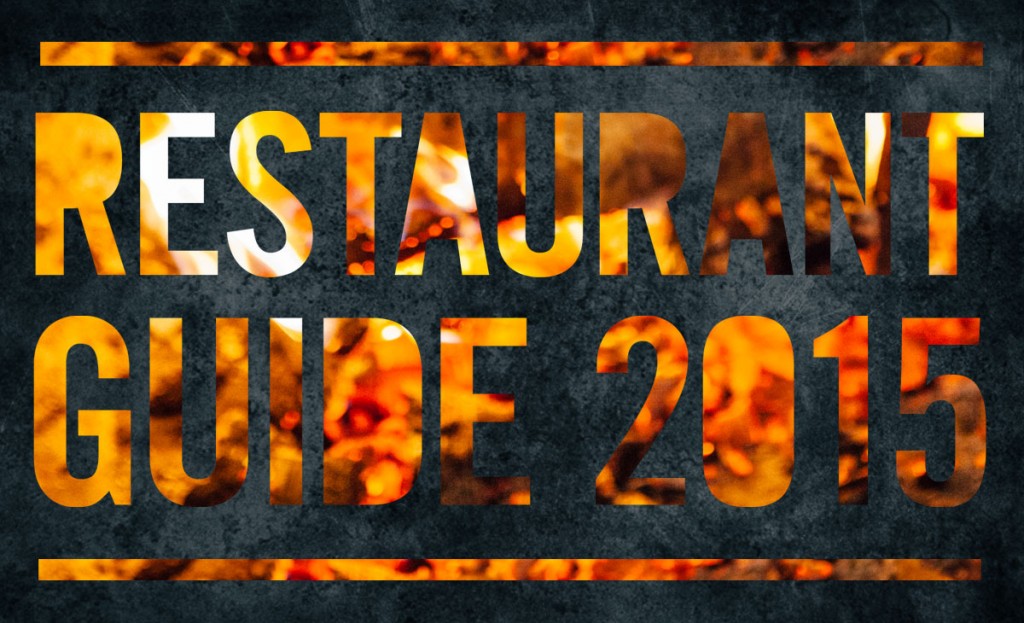