Multnomah Village’s Tastebud is the best new restaurant deep Southwest has seen in a long time.

The homie Nappy B said it best: Geography is destiny.

The First Consul of the French Republic and Protector of the Confederation of the Rhine was talking about the besieging of Russia, not the explosion of wood-fired artisan pizza, but the lessons are the same.

Portland has seen a huge boom in the number of high-end artisanal pizzerias in the past two years. By my count, the number has doubled—just look at the map: 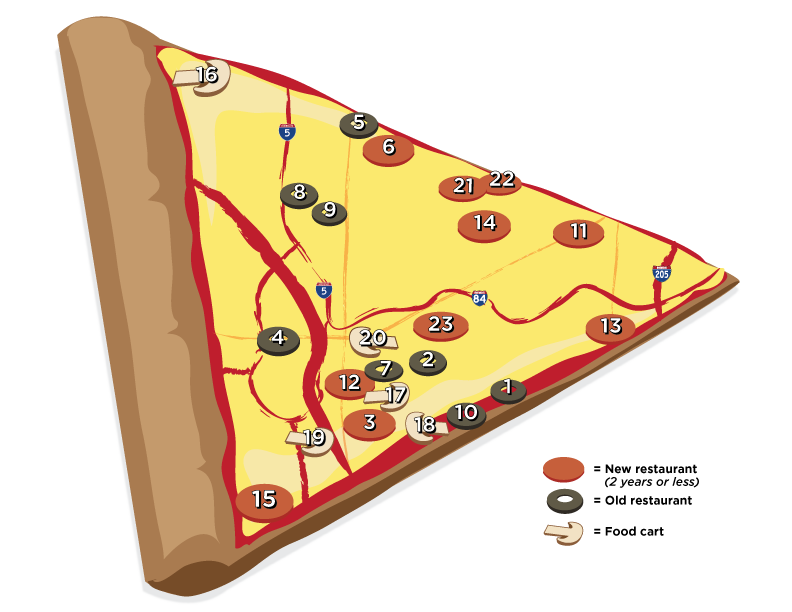 The new Tastebud in Southwest Portland is poised to shine. Not only because of the pies—pleasantly tart dough topped with combinations that play fresh herbal notes off rich meats and cheeses—but due to location. Tastebud shuttered its former eatery off Southeast Powell Boulevard three years ago, and this year became the most exciting new restaurant Multnomah Village has seen in a generation. Maybe two. It's easy to see why the place was packed on both of my weekday visits.

Meanwhile, not far from Tastebud's old location, one of the city's best new pizzerias met its Waterloo in November. That was the Neapolitan Pizza Maria, operated by Sean Coyne, former baker for Thomas Keller's famed New York restaurant Per Se, on dining-dense Southeast Division Street, right by P.R.E.A.M. and the second outpost of Pyro, not to mention Scottie's, Atlas and Cibo.

Tastebud's smart decisions aren't limited to location. The wine list is solid, there are a few well-chosen taps, and the cocktails show a nice touch. We were especially impressed with a hot toddy ($9) with caramelized oranges soaked in rum, and a well-made Old Fashioned ($10) with Buffalo Trace bourbon and Angostura bitters over an oversized ice cube. Both were balanced, restrained and a few bucks cheaper than what we've become accustomed to in this town.

You'll want a plate of the house's crusty bread with grassy green olive oil ($2) and the mixed olive bowl ($4). Salads are seasonal, but the winter selections tend toward the colorful and bitter. An opening course of endive, hazelnuts, apples and a light apple vinegar dressing ($7) precedes the pizza especially well.

The pies are the same form Tastebud has been perfecting for 15 years, with a poster-board-thin bottom and a distinctive, puffy handle on the outer rim. The combinations are thoughtfully built and a far better bargain than building the classic ($14). My favorite was the Nausicaä, with marble-sized crumbles of pork sausage and about half a bulb of lightly sweet fennel.

The pizzas will serve two, and I'd stick with them over the other dishes baked in the wood-fired oven. Our whole chicken ($23) was tasty but more the size of an overgrown game hen. The bird's juices did provide a nice gravy for the roasted parsnips and kale sprouts on the plate below it; these were otherwise lightly seasoned and unmemorable.

Then again, maybe those dishes are sops to pepperoni-allergic glutenphobes sharing a table with pizza enthusiasts. If so, I doubt they're complaining.

Thanks to Tastebud's move to Southwest, very few people in Portland have to drive more than 10 minutes for great pizza.