[COMEDY] Shelley McLendon and Michael Fetters as the titular Aces rarely flash into Portland's comedy scene—but when they do, it is lucid. Their fifth sketch show goes backwoods, playing off camp tropes and shower jokes. The Siren Theater, 315 NW Davis St. 8 pm Friday-Saturday, through March 12. $15.

[THEATER] PTSD, brutal sex and racism rocket to center stage in Dufunkt's wonderful and gut-punching production of Sarah Kane's first play. In it, the repulsively offensive journalist Ian rapes an unsuspecting ingénue named Cate in his Leeds hotel room, which is then stormed by a rebel soldier armed with a rifle. Scenes of anal rape, brutality and cannibalism earned Blasted harsh criticism and then strong praise from Harold Pinter—we're with Pinter. Not recommended for audiences under 18. There will be a post-show discussion about PTSD and domestic violence on Saturday, March 12. No show Feb. 28. Back Door Theatre, 4321 SE Hawthorne Blvd., 481-2960. 7:30 pm. $10-$25.

The Bloodtypes, the Birth Defects, Don't

[BLOODLUST] Don't frontwoman Jenny Connors has always had an awesome voice. But on the band's sophomore album, Fever Dreams, her vocals are particularly boss, striking the exact midpoint between Courtney Love's uninhibited gruffness and the pout of Gwen Stefani. The Bloodtypes make a point of making its bloodlust known and the sophomore album, Pull the Plug, is loud, fast, dark, goofy and a little over the top, and the band can whip out a catchy, '80s synth-pop song just as effectively as a two-minute rager. The Know, 2026 NE Alberta St., 473-8729. 8 pm. $7. 21+.

[FOLK ROCK] You may have heard a Drew Holcomb song on How I Met Your Mother or Nashville or House, but the earnest Nashvillian's music is not just regulated to poignant moments of onscreen character development. Holcomb's seventh studio album, Medicine, represents everything that country-folk crossovers can be—rollicking yet soothing, commercial-sounding while also being deeply personal. HILARY SAUNDERS. Aladdin Theater, 3017 SE Milwaukie Ave., 234-9694. 9 pm. $15 advance, $18 day of show. Under 21 permitted with legal guardian.

[BEYOND BOP] Even if you stop counting after 1970, Reggie Workman's credits are astounding, releasing a batch of jazz albums perched on the edge of freedom. But the bassist has been at it since then, and his latest endeavor, RW WORKz, includes a batch of younger performers, including Tapan Modak on tabla. The amorphous troupe—it's occasionally counted saxophonist Odean Pope among its members—reaches toward a contemplative spot, a space folks like Pharoah Sanders are still searching for more than 50 years after beginning to get those explorations down on record. If the Friday gig isn't enough, though, Workman's also set to play Saturday as part of an Alice Coltrane celebration, along with Sanders. DAVE CANTOR. Alberta Abbey, 126 NE Alberta St., 897-7037. 10 pm. $15-$35. All ages.

Toast brings together a profound wealth of Northwest spirits, along with whiskey, tequila, rum, gin and all the rest from all around the globe. Over 40 distillers will be represented, and the ticket price will include food from Bellino, Lechon, Pok Pok, Smallwares and Swank and Swine. Really Big Video, 539 NW 10th. Ave, oregondistillerytrail.com. 4 pm-10 pm (3-11 pm for VIP). $45-$65.

[NOIRTRONICA] Brooklyn duo Beacon crafts some of the cleanest, chilliest, darkest electronic pop out there. The slickness of its sound is perhaps no surprise, given that Thomas Mullarney III and Jacob Gossett are former Pratt Institute students. Latest release Escapements delivers trance-inducing layers of synth, samples and serene vocals. It's cool to the touch, but thaws out thanks to an audible R&B undercurrent. Local powerhouse Natasha Kmeto imparts some bluesy soul to the pop-oriented bill. MARK STOCK. Mississippi Studios, 3939 N Mississippi Ave., 288-3895. 9 pm. $12 advance, $14 day of show. 21+.

[BUY PDX] The Kinfolk-worthy boutique that specializes in delicate metal jewelry hosts a sale for international wares that owners Betsy and Suzy have found on their travels. Shop West African baskets, colorful fans, rugs and glass beads from places like Peru. Betsy and Iya, 2403 NW Thurman St., 10 am. Free.

[COMEDY] Lewis Black can't be credited with inventing political comedy, but he very well might have perfected it. A veteran of The Daily Show, author of three best-selling books and scene-stealer in almost every movie he's ever been in, Black's ranting style of political humor has made him the gold standard in his chosen comedy mode. Black brings his tour to Portland for one night only; he probably has some thoughts on the current presidential election. MIKE ACKER. Arlene Schnitzer Concert Hall, 1037 SW Broadway, 800-273-1530. 8 pm. $25-$75.

[PIFF] Like 2007's The King of Kong, Man vs. Snake chronicles the present-day battle to be world champion of the 1982 arcade game Nibbler. Animated flashbacks are interspersed with talking heads and gameplay footage as original record-holder Tim McVey defends his title. The story is nothing new, with many of its beats lifted straight from King of Kong, but the characters and their struggles are always entertaining. Hyperactive Canadian pizza-delivery man Duane Richard is undeniable with his manic profanity and a hairstyle that goes from dreads to bowl cut in under two hours. Critic's Grade: B+ MIKE GALLUCCI. Cinema 21. 10:30 pm Saturday, Feb. 27.

[ALICE'S WONDERLAND] Many casual fans forget, but Alice Coltrane contributed almost as much to jazz as her husband John, composing some of the most beautiful melodies in the history of the genre. Tonight, her son, saxophonist Ravi Coltrane, leads an all-star group, including pianist Geri Allen, bass legend Reggie Workman and special guest Pharoah Sanders—one of the most critically-hailed reed men to ever live—in celebration of all things Alice. PARKER HALL. Newmark Theatre, 1111 SW Broadway. 7 pm. $29-$59. All ages.

The Silence of the Lambs

[LUBE TUBE] Currently a mainstay in Portland theaters due to a combination of the film's 25th anniversary and Portland's hatred of small dogs, The Silence of the Lambs keeps the lotion flowing for another week. Mission Theater. 8:30 pm 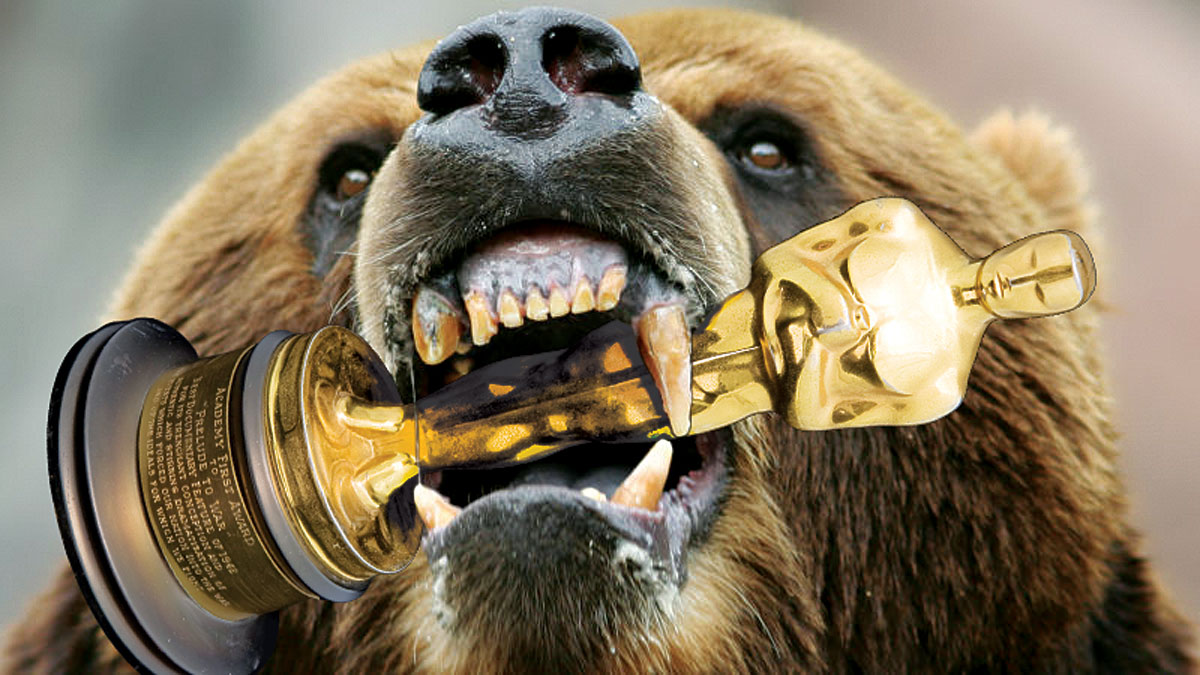 As you're probably aware, the Academy Awards telecast only shows you only a sliver of the awards given out. You get the glamor of Best Picture without having to see the nominees for Best Title Cards or Best Original Lighting Design. It can get obscure. So, to help you out, We've combed every industry rumor mill and back channel to advise you on your predictions for these lesser-known Oscars. See the list here. The Academy Awards Ceremony is on ABC. 5:30 pm. Hotel Monaco's viewing party is at 4 pm.

[BOOKS] When his father goes missing, Army veteran Atticus Turner and his Uncle George, author of (very "in this universe" real) The Safe Negro Travel Guide, travel from Chicago to New England to find him. In Matt Ruff's newest novel, Lovecraft Country, the Turner men find a country full of not just the racial horrors of mid-'50s America, but some otherworldly ones as well. Powell's City of Books, 1005 W Burnside St., 228-4651. 7:30pm. Free.

[COMP ROCK] The regional compilation can be a dubious undertaking. It typically runs the risk of overestimating the potential broad appeal of its scene's subtle charm. But Mt. Portland is more a recording project, by Portland's Buzz or Howl Studios, wherein contributions were made via a free, onsite recording session from house engineer and owner Stan Wright. Since the influx of creative types to Portland over the last several years has made transplant-composed art-rock bands ever more prevalent, there's no shortage of delightfully strange samplings here. Read the full review here. Release party at Rontoms, 600 E Burnside St., with And And And, Joel Magid, Candace, Boone Howard and Michael Finn Duo. 7:30 pm. Free. 21+.

[GANGSTA RAP] Summertime '06, his debut double album, is gangsta rap insofar as it draws directly from his time as a teenage gangbanger. But the production, from Def Jam maestro No I.D. and others, has an eerie, dystopian feel, more Cormac McCarthy than Beats by Dre. Staples is a gifted lyricist, but his gift is not clever punch lines or cinematic storytelling. It's his ability to lock eyes with the listener and drag them into his worldview. While Kendrick Lamar grapples with turning pain into hope, Staples deals in blunt-force realism: No abstract images or poetic metaphors, just the dead bodies in the alley as he saw them. Read the full article here. Hawthorne Theatre, 1507 SE Cesar E. Chavez Blvd. 8 pm. Sold out. All ages.

You For Me For You

[THEATER] If Kafka, Lewis Carroll and Dalí met in the woods, their collective diary might look like Junhee's story in Mia Chung's play about two North Korean sisters separated at the border when they try to escape starvation and censorship. But Junhee (Khanh Doan) is only half the story in Portland Playhouse's deftly-staged show. The backdrop—a tiled world map on three sliding panels—splits to reveal an alternate stage. There, Junhee's sister Minhee (Susan Hyon) escapes to New York City and is bluntly introduced to modern culture via customs and Costco sampling ladies. Read the full review here. Portland Playhouse, 602 NE Prescott St., 488-5822. 7:30 pm Wednesday-Saturday and 2 pm Sunday, through Feb. 28. $32-$36.