The Absolute Finest Ceviche Portland Has Ever Known

To understand Paiche, you have to know how chef Jose Luis de Cossio buys his limes.

The lime is the most important ingredient, he says, in a cebiche—the citrus-cured fish dish that is the pride of de Cossio' home country of Peru. In a half-hidden John's Landing shoebox that looks more cafe than restaurant, de Cossio serves some of the most extraordinary food in Portland—including multiple versions of cebiche each day, each with its own creamy leche de tigre, a bright sauce imbued with the essence of Peruvian peppers.

de Cossio was executive chef of perhaps the most famous cebichería in Peru—Gastón Acurio's La Mar in Lima—before arriving in Portland to cook at Andina, Paley's Place and Raven and Rose. And the cebiche de Cossio makes at Paiche is brighter and more flavorful and balanced than any I've experienced in this country.

The leche de tigre is luxuriantly dense to the point of creamy, never over-acidic despite an explosive burst of lime flavor, balanced against the sharp bitterness of onion and the airy texture of cancha, a delicate toasted corn. The fish may be tuna or snapper in ají amarillo ($16), or maybe a mixture of tender octopus and scallop in ají habanero ($16). A vegan cebiche ($9) uses thin slivers of beet.

But to get that brightness and sweetness, de Cossio cannot entrust the limes to just anyone. He tried ordering fruit from purveyors, but he had to keep sending them back. And so, he inspects each lime personally while hopping among up to three markets in a day, and then soaks them all for hours to remove bitterness. He cuts out a taste of each lime before he will use it in his sauce. To get fish that meets his standards, he must go to Hawaii—a habit he shares with Roe's Trent Pierce.

de Cossio applies the same exacting care to every item on his menu.

Each meal at Paiche should include multiple sides involving potato, whether causa or camote. Paiche's causa amarilla de palta ($7) is on the one hand potato salad—but the potatoes are starchy, flavorful, bright yellow, hand-emulsified and enriched with oil and salsa criolla, with a slice of avocado folded around the top to create a dish so colorful it might as well be the flag of Brazil. A recent causa special ($12) arrived with a generous topping of crab for a beautiful salty warmth. 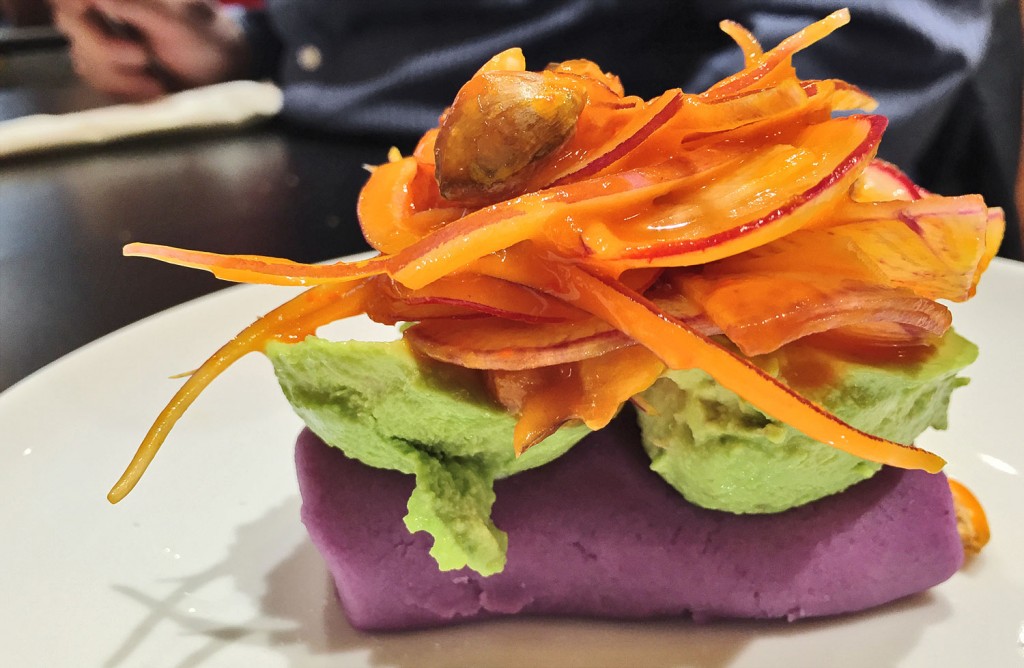 The camote is a bright-purple yam marinated in vanilla—already a riot of flavor and satisfying texture. But the coup de grâce is a purple-corn reduction made with fruit scraps and the sap of a Peruvian tree, a jet-black infusion of earthy flavor that is grotesquely addictive. It is de Cossio's own invention, and he uses it as an all-purpose weapon in the kitchen.

The jamón del país sandwich ($11), another point of Peruvian culinary pride, is tender marinated pork leg on a potato bun, livened with fresh aioli and a short-fuse detonation of flavor in the form of sun-dried ají pepper escabeche. A tamale—a dish that is rarely remarkable—was remarkable, a powerful depth charge made of corn. Much of the menu—including an excellent tacu tacu "bolognese" made with curried red quinoa—is gluten-phobic and vegan-friendly.

Drinks are minimal, but include an impossibly bright-tasting smoothie, Pfriem beer by the bottle and midrange wines at prices as low as $22 for a bottle of decent bubbly.

The only complaint, if you can call it that, is the hours the restaurant keeps. The tiny eatery is a family affair—just de Cossio and partner Casimira Tadewaldt, who runs the front of the house, and a single employee who works with de Cossio in the kitchen—so hours are limited to just lunch service, in part so the couple can tend to their young child.

Though the menu changes almost daily, de Cossio says he plans to keep it small and centered on the Peruvian foods he knows best, like potato dishes and cebiches and jamón del país. He would rather do a few things very well than many things merely adequately. "This is the only thing I know how to do besides surfing," de Cossio says of his cebiche, "so I have to be able to do it well." MATTHEW KORFHAGE.