Chef Naoko will expand to 50 seats and look like wood-slatted fractal.

Tiny, unassuming Japanese bento-style restaurant Chef Naoko is getting a major makeover and expansion designed by one of the most famous architects in Japan, Kengo Kuma.

Though his architectural firm employs over 150 architects, Kuma has been attending to the little Portland restaurant personally, says staff at Naoko.

Chef Naoko Tamura—well-known in her home country for literally writing the book on Japanese organic cooking—met architect Kengo Kuma while he was working on the "Cultural Crossing" expansion of Portland's Japanese Garden.

"When the space next door became available, Naoko talked to Kengo Kuma about it and he offered to be the architect," says Naoko's spokesman Graham Bell.

Kuma is now best-known for his controversial wooden-lattice stadium design chosen for the 2020 Tokyo Olympics. After a protest led by Kuma and other Japanese architects, Hadid's elaborate praying-mantis-mouth design was scrapped, and Kuma's was chosen. Hadid responded by accusing him of plagiarism of her original design, which Kuma denied—an accusation that seems a bit ridiculous if you have, umm, eyes.

Kuma's design for the expanded Chef Naoko, which will seat 50, makes use of some of the same touches as the stadium and garden. The Southwest Jefferson Street restaurant features a striking array of organic wooden shapes descending from the ceiling, a stone garden and wood-lattice walls. 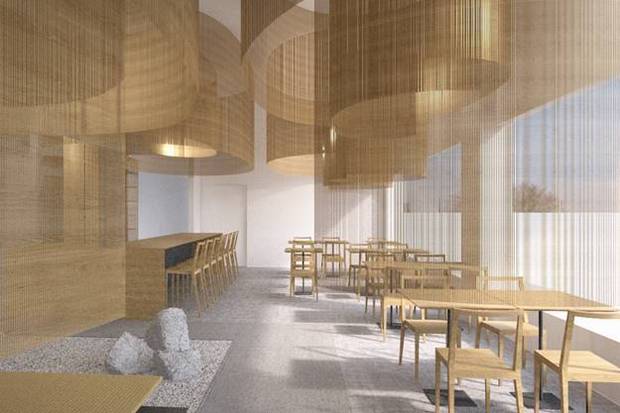 The space will have two separate kitchens—one for catering, one for the restaurant.

"We have been looking to expand for the last two years because our current location is usually full, " says Bell, "and we have to turn customers away. And our catering has expanded to more than 50% of our business."

Expect to see the new look this September, when it will become the first restaurant in the United States designed by Kuma. Here are pictures of some other Kengo Kuma projects, just for fun, all found here: