The Best 10 Clam Chowders on the Oregon Coast, From Astoria to Yachats

We tried 25 lauded chowders on Oregon's North Coast. These are the best ones.

If you're a restaurant on the coast, you serve clam chowder. That's just the way it is. Like saltwater taffy and fudge and ice cream, it pervades the beachfront because tourists expect it. This despite the fact that, as it turns out, our clams don't make good chowder.

When it comes to chowder, Oregon's razor and butter clams are delicate and mild, less suited than the East Coast's much brinier sea clam. Or so I learned after eating at 25 chowder spots along the Oregon Coast while working on Going Coastal, our glossy 2016 outdoor magazine that hits stands June 8. It may hurt my pride as an Oregon native, but most of the best chowders in Oregon are made with imported East Coast clams. Our mollusks' subtle nature probably also inspired the West Coast habit of adding extremely unsubtle bacon.

Nonetheless, 100 years of grab-bag chowder tradition has also made for some beautiful soup. I ate every bowl of coastal chowder between Astoria and Yachats that somebody said was "the best," be it another food writer, friend or even convincing internet advocate.

I graded on three equally weighted criteria: general clamminess (bacon soup wins bacon chowder contests, not clam ones), texture, and depth of flavor. Improvisation is appreciated, but classic chowders are considered beautiful, and Manhattan is ignored entirely. Here are the 10 best.

Rich, peppery New England chowder with a dab of paprika and parsley at a casual, well-worn seafood spot with a salad bar in the back and stained glass above each booth.

Gracie wasn't a cook. At the 53-year-old Sea Hag, Gracie was an entertainer, a consummate hostess, and a player of the bottles. "She made everyone at the restaurant feel like it was their own," says Clary Grant, who bought the Depoe Bay restaurant 10 years ago with her husband, Jerome, after serving as its manager for 10 years, where it sits alongside multiple ice-cream shops and a place serving saltwater taffy from an ancient puller.

Turns out nobody quite knows which cook in the Sea Hag kitchen came up with the chowder recipe, but it's been featured in The New York Times Heritage Cookbook as one of the best in the country. Nonetheless, says Grant, the recipe has remained unchanged for at least 40 years. The chowder is made fresh daily from scratch, with East Coast rather than West Coast clams, peppered to a light bite, cooked with a host of spices, including basil and thyme, and thickened with a light roux of flour, milk and butter.

Each bowl is given a dollop of fresh butter, parsley and paprika—it's an old cook's trick, but it works. The soup is spiced just to a tickle, deep with herbs and potato and plenty of clam, and leaves behind an unctuous depth that lingers long after each spoonful. Gracie died in February, but both restaurant and chowder survive beautifully.

A decades-old, beautifully authentic chowder recipe from a New England import, served in a 70-year-old restaurant with a beautifully preserved, dimly lit old-man bar with a fire pit on the patio.

This Cannon Beach spot very nearly unseated Gracie's. The restaurant and bar picked up its chowder recipe about 30 years ago from a New England-born chef named Kirk Anderson—it's been cooked for the past 19 years by Eddy Morales. Again, he uses East Coast clams, and keeps making the soup base hour after hour throughout the day so it's consistently fresh: celery, onions, roux, sea clams and clam juice, with no bacon. This thing's all clam, and deep with it. It's a splendid, almost archetypal New England-style chowder.

A hearty chowder with a huge volume of garden-fresh local veggies and a surprising richness of clam flavor beneath it, in an almost hidden chowder shop that doubles as one of the best ice-cream parlors in Oregon.

If you ask owner and chef Julie Barker, you really shouldn't get the Northwest Spring Clam Chowder at her ice-cream and chowder shop tucked away up some stairs and past an antique store. "It's my least favorite on the menu," she says. She far prefers her Thai Chowder to that one—and indeed, the spring chowder we tried has already been swapped out for a summer version. But Barker has high standards, it turns out. Her ridiculously rich, flour- and gluten-free base is a mix of halibut stock, clam juice, sherry, lemon juice, a proprietary bay seasoning blend, and pureed potato and bacon—and into the mix she throws just about every vegetable you can think of. It's a chunky, hearty, rich chowder that is nonetheless deeply redolent of clam. And she makes ice cream that's just as good as her chowders—especially a ridiculously rich marshmallow. Hell, she might make the best ice cream I've tasted in this state.

A bougie Newport spot famous with old ladies for its view, it serves some of the most lovely French-rouxed clam chowder we've ever had. 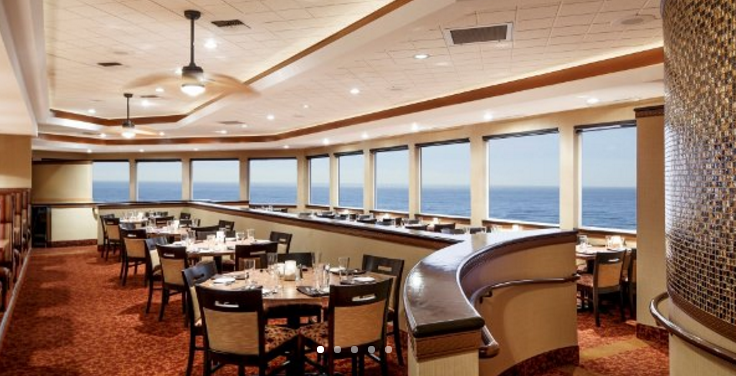 This bayview Newport restaurant adjunct to a Hallmark Inn resort is self-consciously fancy in a 1980s way that makes it popular with 60-year-old ladies of the landed gentry, a place to take mom for Mother's Day. But the chowder? It's maybe the most beautiful, classically French roux we tasted—a rich soup made for conquering Normans. While most of the soups rotate, this one sticks—a bacon-and-onion-rich broth with peeled potatoes diced small enough they serve to thicken the soup rather than distract from it.

Blackfish's chowder is murderously good. Chef Rob Pounding's 17-year-old Lincoln City restaurant is modeled after a French bistro, but the broth here is heartily classic American, with huge clam chunks, plenty of potato and beautifully dispersed clam flavor. The menu lists it simply as the "best chowder on the Oregon Coast," a title it won back in 2009 in a cook-off. It's not far from it.

An unpretentious, extremely delicious chowder from a bare-bones, blue-collar fish house and market that packs most of the razor clams on Oregon's north coast—but still augments its chowder with East Coasters.

Buoy's Best is proof positive that fancy doesn't always equal best. Despite the fact that the fish market next door, Bell Buoy, is one of the only places approved to clean and sell razors—which means most restaurants up and down the coast are using its clams—the cook sheepishly admitted to augmenting the chowder's flavor with East Coast clams. And it also uses a potato-bacon stock from a purveyor, a fact the cook laughingly said he probably shouldn't tell me. But the secret that makes the chowder so rich, aside from the wealth of razor and sea clams? Buoy lets the broth sit overnight in the fridge until that clam flavor pervades every part of the soup. It's rich as all get-out, and tasty.

Dooger's, which has expanded to three locations, including Warrenton and Long Beach, is the simplest soup on the whole list. It's milky and bacon- and flour-free. It's pretty much half-and-half, East Coast clams, and potatoes peeled and diced like you'd serve them for breakfast. It's chowder for Grandma and for our news editor, Aaron Mesh, who loves it to a degree he knows to be unreasonable. But its simplicity also amounts to eloquence.

An oh-so-buttery chowder from the fanciest restaurant in notoriously unfancy Astoria. 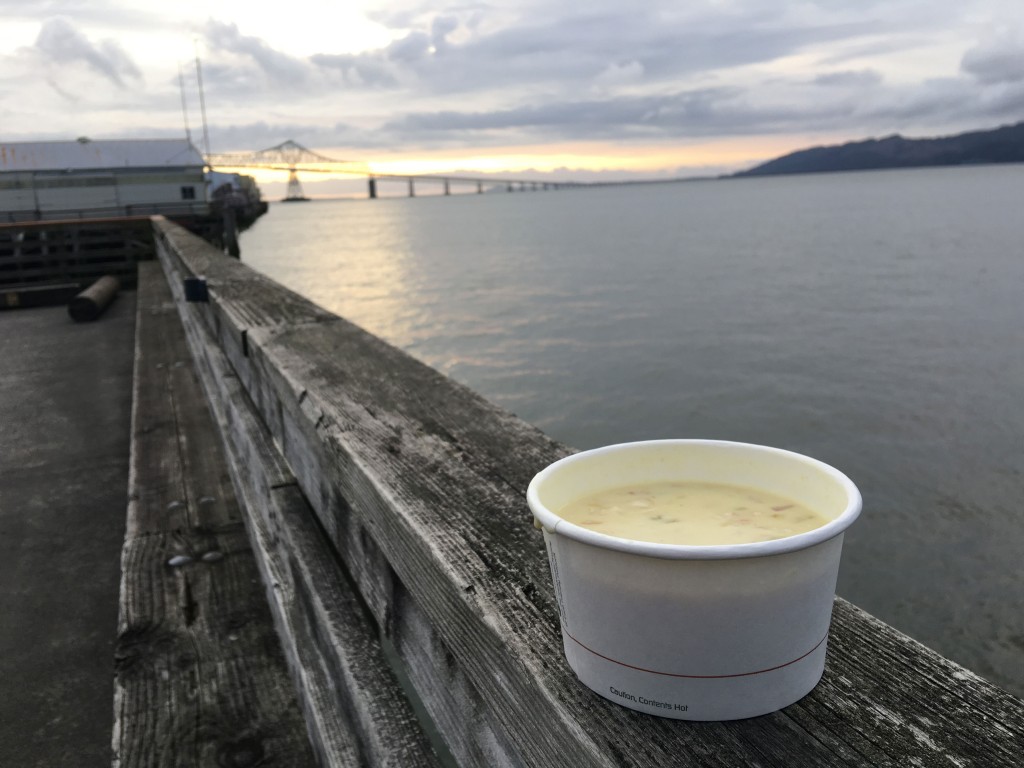 Baked Alaska—a fancified, almost comically well-mannered seafood spot along the river in Astoria—serves the chowder Julia Child would have made. "Oh, just a little bit of butter!" she'd say, while jamming a whole damn salted stick in there. It's almost cheating, but holy hell: sooo rich.

A tiny, ramshackle dive that looks like the hideout in The Goonies and seems also to be run by the Fratelli family, with a sweet and buttery bread bowl that's comforting and addictive. 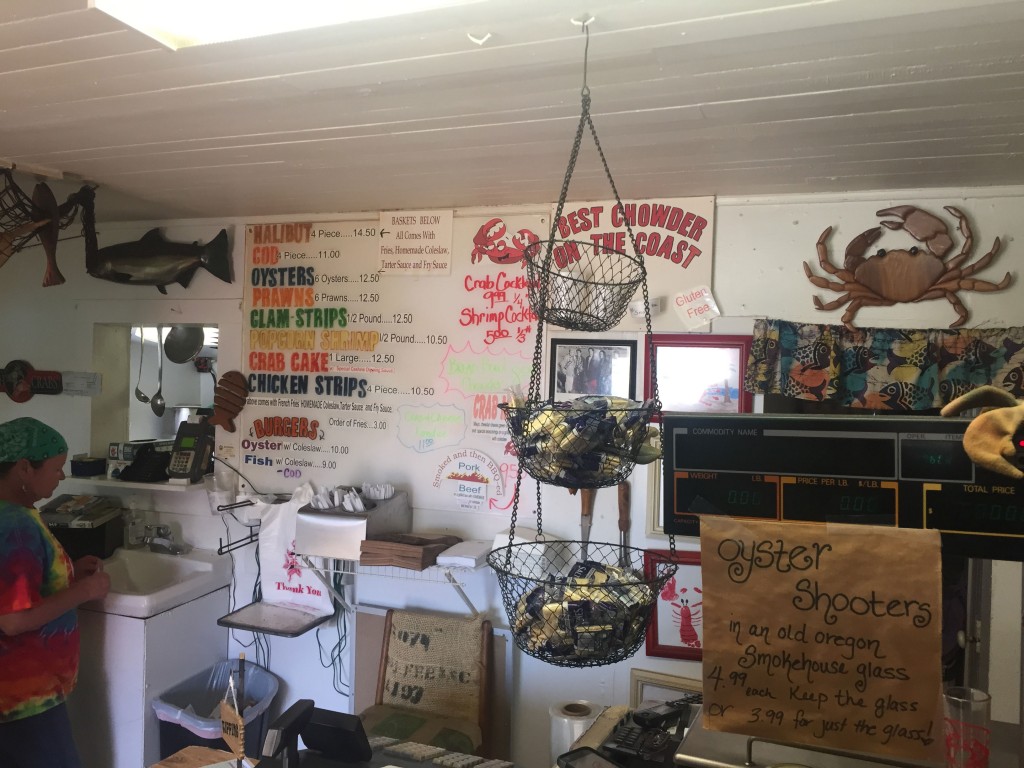 This seafood dive serves what's apparently Portland Food Adventures organizer Chris Angelus' favorite bowl of clam chowder on the coast. I don't know if I agree about the chowder itself; it's a bit salty. But it's by far my favorite bread bowl. Where others use sourdough, the Old Oregon Smokehouse—a fish chain founded in Scappoose, believe it or not—uses bread that tastes exactly like a dinner roll at a roadside diner, all sugar and butter. It's trashy, and amazing, and a comfort far beyond proportion. I love it so much.

Also visited, in order of preference: