The Best Restaurants in East Portland, From Taquerias to German Sausage Houses

Obama ate at one of these East Portland restaurants.

Mother Russia's bosom embrace comes to life in this all-purpose deli. Cold cases stock a half-dozen types of pierogis, prepared stews, more sausages than your arteries can handle, and "herring under a fur coat" by the pound. There's pickled fish, smoked fish, stewed fish and fish deep-fried with their heads and tails still on for 75 cents each. Women in long, floral dresses bustle around the labyrinthine rows of jams, pickles and baffling Russian ointments. Ask them what's best, and take home an armada of deli containers from the smorgasbord of meats and beets. ENID SPITZ.

It isn't easy to find this cart, which is hidden behind fences in a small pod at the intersection of 102nd and Stark. Hint: It's across the street from a Starbucks, kind of. But a steaming takeout box of pelmeni covered in dill and spices ($7 for chicken, $8 for lamb) is worth a couple trips around the block. The traditional Russian dumplings are made for winter: They warm you up and inspire post-meal napping, if not a full hibernation. If you need more—and you won't, but you'll want more—the meat bliny ($5 for two pieces) is basically a tasty crepe filled with ground spiced meat. It strikes the perfect balance between sweet and savory. You may finish it in the car before you make it home. LIZZY ACKER.

Alongside its little grocery sporting the highest stack of Ritter Sport flavors anywhere in town, this little German-founded, Romanian-owned meat shop and deli offers a pleasant $6.75 schnitzelwich, plenty of sausage and some of the finest German potato salad in town. Get a Debreziner or Hungarian or (fairly mild ) hot bier sausage on a bun for a cool $5.75, top it with kraut and European mustard, and rest in memories of the Old World. But especially go for what's maybe the only Romanian street food in town—little casing-free mici sausages from the motherland for $2 apiece. MATTHEW KORFHAGE.

The outer reaches of Sandy Boulevard—at the border of manufactured homes and row houses and farm stands hawking Hood strawberries—seem an unlikely place to find some of Portland's best family-style Thai, but Sa Bai Thai is serving curries with sweet, bright heat—in particular a panang curry with tender pork, coconut milk and fresh pungent spice, and a slightly fish-forward tom yum with an unholy wealth of herb and fresh veggies. It's also perhaps the only family-run Thai-owned restaurant I've visited with a pair of farang manning the service slots—both, also, in the family of owner Wannaporn Chusri Olson. MATTHEW KORFHAGE.

One of my first and favorite food memories as a child is of noodles—majestically hand-pulled from sheets, a magical and impossible dinner theater I witnessed weekly at the once-wonderful Imperial Garden restaurant in Oak Grove. Funny to find out, lately, that the same family has threaded through Chinese food I've since loved at Chinese Delicacy on Southeast 82nd Avenue and now here at Taipei Noodle Haus in East Portland. Despite its Teutonic-Taiwanese name, the spot's influences are at the border of Chinese and Korean—but the specialty is, indeed, wonderful hand-pulled noodles, served out of a former sports bar still ringing with the sound of video poker. But, dear Lord, get the ja-jiang mein ($9.25), a pile of beautiful, slightly irregular, chewy, lovely noodles served with a sauce intimidatingly ink-black and goopy with bits of octopus. Within bites it will lose all unfamiliarity and become your only comfort—unless, that is, you opt for the dandan noodles ($7.95) or the chow-ma seafood noodle soup ($9.25). Unlike the crowd in the walled-off video poker room, on the noodles menu you always win. MATTHEW KORFHAGE.

Not to be confused with the bento-focused Original Joe's at Jantzen Beach, or the now-shuttered original Original Joe's on Southeast Powell, or the Bay Area franchise of the same name, this Original Joe's serves all-American comfort food of the county-fair and sports-stadium variety: sloppy burgers, hot dogs drowning in their fixings, and their signature, hand-dipped corn dogs the size of a billy club. At a glance, you might assume the generic gray building was a convenience store or check-cashing place, and it's not much to look at on the inside, either—linoleum floors, plastic covers on the tabletops, an arcade of video poker machines set off from the dining area—but it does what it does well, putting a twinge of nostalgia in every artery-stretching bite. MATTHEW SINGER.

Since 1948, this hulking East Portland steak house—it looks like the lobby of a Red Lion but has the community feeling of a summer camp that lasts forever—has offered a free meal to anyone who can eat an uninterrupted 4½ pounds of boneless, no-trim beef, accompanied by a nonsensical array of sides: two each of pickles, olives, carrots and celery, a piece of bread, 10 french fries, an onion ring, and a small bowl of ice cream. I have done it, and it will probably scar me in ways I have yet to recognize. But the mostly sexagenarian-plus customer base is more likely to do what the longtime regular next to me did: order a 40-ounce steak, then make three meals out of it. MATTHEW KORFHAGE.

Related: One Man's Quest to chomp through 39 pounds of Portland Food Challenges (Video)

When I asked Jose Graciano, owner of this father-son taco cart—in a tire store parking lot, next to a hard-luck bar called Happy Landings—where he found good Mexican food locally, he said he didn't eat anywhere else because his standards were too high. Then I ate his tacos and understood. This is the finest taco cart in all of Portland, from the perfect pickling on the carrot-free escabeche to the beautiful tortillas (made fresh daily by Las Cuatro Hermanas in Hillsboro) to the expertly seared finish on the lengua, the juicy and tender carnitas, the spice explosion of the al pastor, and—oh God—wonderful tripe and carne asada bursting with beef, and by far my favorite tender cabeza in the city. MATTHEW KORFHAGE. 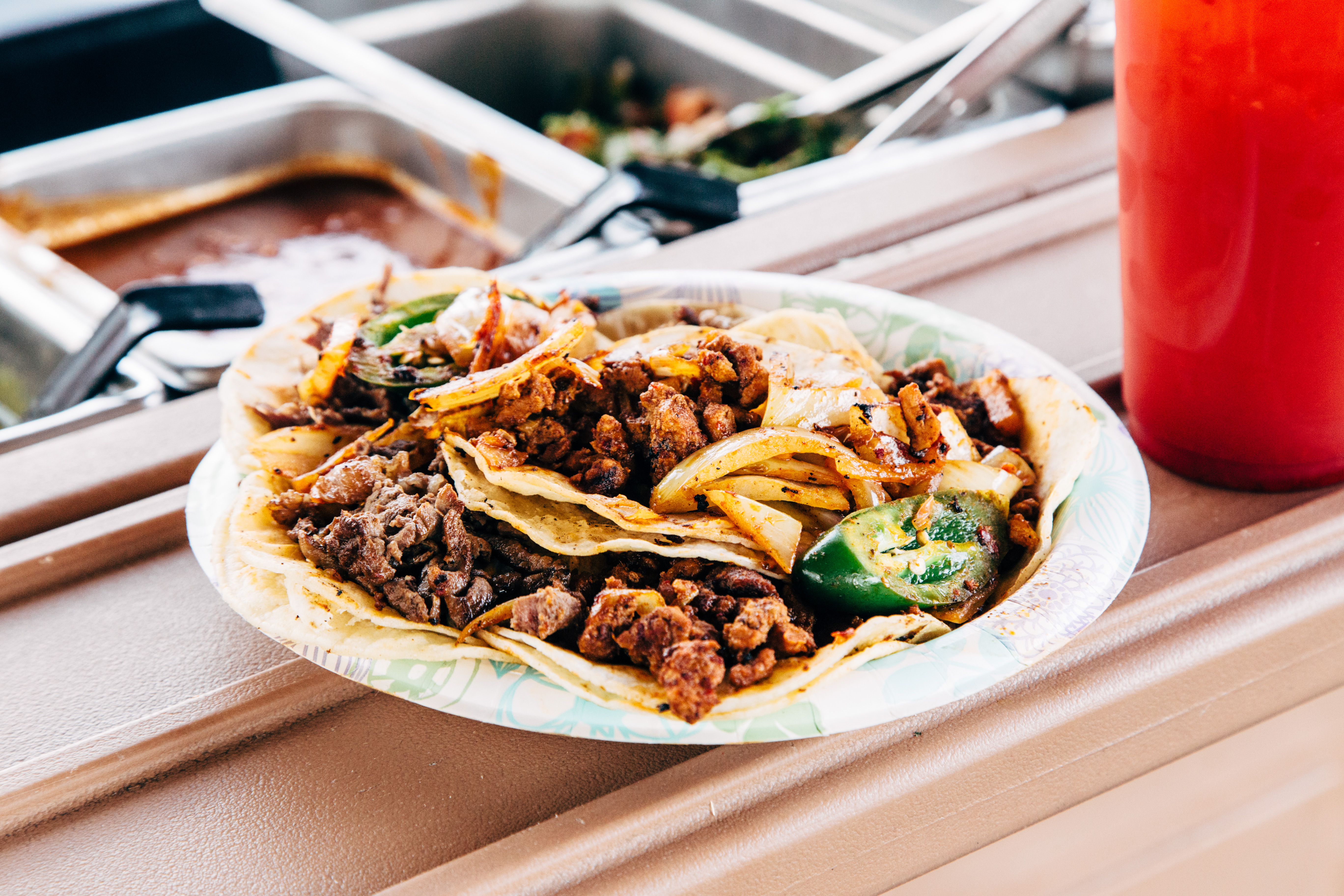 If you're a taqueria next to the marvelous Supermercado Mexico supermarkett—which itself contains a taqueria—and yet you're packed with diners at 3 pm on a Sunday, there's a reason. It probably isn't the "Dember Homelett," a Latinized all-American breakfast I am eager to try one day. Though Mi Pueblo has family-style birria and enchilada plates and fried whole mojarra fish, what leaves me excited is the rare flat-top-seared crispness on its flavorful carnitas, the beautifully managed texture of its tripe, and the lovely corn flavor of its housemade tortillas. Those $1.25 tacos are excellent. Order a plate of three carnitas for under $5, and be well. MATTHEW KORFHAGE. 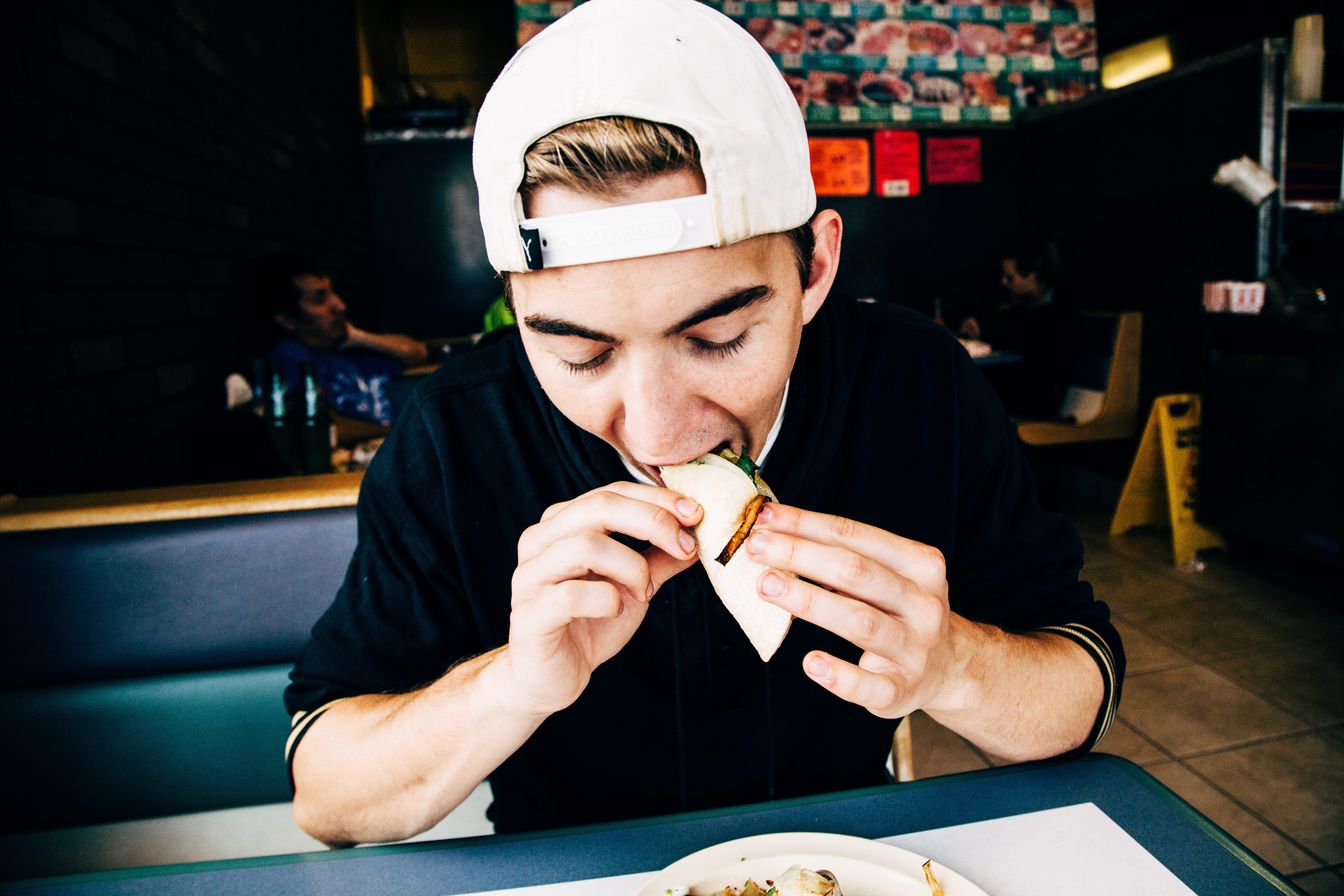 Before Pollo Norte and Pollo Bravo and Polli-Tico, and long before Chicken and Guns, the only truly great slow-cooked, crispy-skinned, spice-rubbed Latin chicken was all east of I-205, whether at El Inka in Gresham or this taco truck fronted by a grill tightly packed with beautifully browning pollo al carbon massaged with Sinoloan flavors. A $20 bill is a ticket to an entire succulent chicken and sides—although you'd be a sucker to pass up lesser-seen items like the gooey-cheesed vampiros or ceviche freshened by an extra lime squeeze as you watch. Ever wonder where Mexican-born cooks working in other kitchens eat when they finish their shift? This is the spot. MATTHEW KORFHAGE.

Cruiser's has been cruising since the 1950s fetish of the 1980s—previously, it was Double E's—and it has that oddly canned feeling of a replica, with checkerboard blue floors and pink walls and claw-crane toy machines. It's a drive-in the same way Argentinian steak house Ox is: It has a parking lot. The Fantastic Burgers are thousand island-smothered, with pickles and ham and an oddly crisped egg—a protein-piled trashiness that requires a certain amount of cultural memory to appreciate. But the soft-serve cones are really the reason you come in, "splashed" with flavors from caramel to blackberry to neon green green-apple and stacked to unholy heights. It's wonderful. MATTHEW KORFHAGE.

Before there was Grant's Philly Cheesesteaks, there was Grant's Philly Cheesesteaks. Long before Portland's best Portland-style Philly hoagies showed up in Slabtown near our offices, we were making the long trek out to Portland's far Northeast, where industrial workers from the airport warehouses line up single-file at a little red A-framed shack for cheese-drenched fries, fresh-made potato chips and that magical thin-sliced sirloin, Italian bread, peppers and cheese—provolone preferred, though whiz wit' is always available. Pull a Coke out of the Coke fridge, walk out to a patio table, and relish one of Portland's most brotherly experiences. MATTHEW KORFHAGE.

Down at Reel M Inn, the beers are still basic, the boxes of empty bottles still taking up two of the 20-odd chairs, and the lone bartender-cook-barback-server-cashier still has way too much to do. But the cramped Division Street dive isn't what it was even five years ago—on my last visit, the place was packed with nattily dressed Golden State Warriors fans. Next time I want chicken and jojos during a ball game, I'll drive out to Sadie Mae's, the secret sister by Mall 205 where there's still just one guy doing it all. It's a spacious and half-empty bar where the stool next to you is occupied by a guy who looks like he just got done laying bricks all day. MARTIN CIZMAR.

Very few people know this, but there are some rich people out in Gresham. And when those rich people want a bloody steak after playing 18 holes, this is where they go. Originally branded RingSide East and mirroring the stuffy West Burnside steak house, this clubhouse restaurant at the county-run Glendoveer Golf Course rebooted last year. It's now large and airy, though everything is wood, and that wood is dark. The more casual grill has a big beer list and a bargain happy hour, when a basic cheeseburger with chips is just $3.75 and steak bikes are $4.75. There's no price break on the city's most famous onion rings, which are always $10.50 and very good. MARTIN CIZMAR.

Obama ate here, but should you? This old-school diner is like an eastern cousin to Hotcake House, and known for heaping portions of potatoes (hash browns or big, pale steak fries nearly the size of jojos) and cheap vittles. The tables have advertisements for hydroponics and auto parts on them, the servers have more tables than they can handle, and the plates come heavy. If you come on a weekend, expect to wait—Obama went on a Tuesday, and had split pea soup. MARTIN CIZMAR.

Hot damn, the Adventists can make a Tex-Mex taco. This cafeteria inside Adventist Medical Center behind Mall 205 dishes up vegan health-food fare that is as clean as its antiseptic setting. Quinoa and kale bowls are drizzled with nondairy ranch alternatives and stacked with tempeh. Rotating daily specials include "live tacos" with romaine for a shell or black bean patties sans bun. The Bistro hits the price point of a dive ($3-to-$8 specials), but looks like a cardiology waiting room and tastes like a co-op. Skip the pizzas—a cardboard pita with one or two veggies and a glob of "cheese"—and go for the quinoa salad, which could actually masquerade as Harlow fare. Sitting with doctors on their break, munching lentils in a spotless Panera look-alike—this could reverse clogged arteries. ENID SPITZ.

Related: The Superest Bowls in Portland

Why We Devoted an Issue to East Portland

Shopping the Ethnic Markets and Weird Specialty Shops of the Numbers

The Coolest Nightclub in Portland That Doesn't Even Serve Alcohol

Where to Find Your Favorite Chef's Favorite Tacos

The Mysterious Butte With a Sordid Past

Our Favorite Bars in the Numbers