Please Louise is arriving a little late to the party.

The chic new pizzeria from Breakside Brewing owner Scott Lawrence and his old friend Brian Carrick opened a couple months back around the corner from the new Slabtown New Seasons. It follows on the heels of a sausage boom that's brought about a dozen similar spots to the city in the past few years. Already, we've seen some fallout, as two of the very best, Pizza Maria and P.R.E.A.M, were forced to close before their time.

Please Louise should be fine, though. Mainly because of its location in underserved Northwest, beyond Nob Hill and the Alphabet District. Slabtown is a wealthy, increasingly dense neighborhood—essentially 21st and 23rd avenues north of Lovejoy Street and south of U.S. 30—that's never had a pie spot like this, and Louise is well-calibrated to the area's sensibilities. 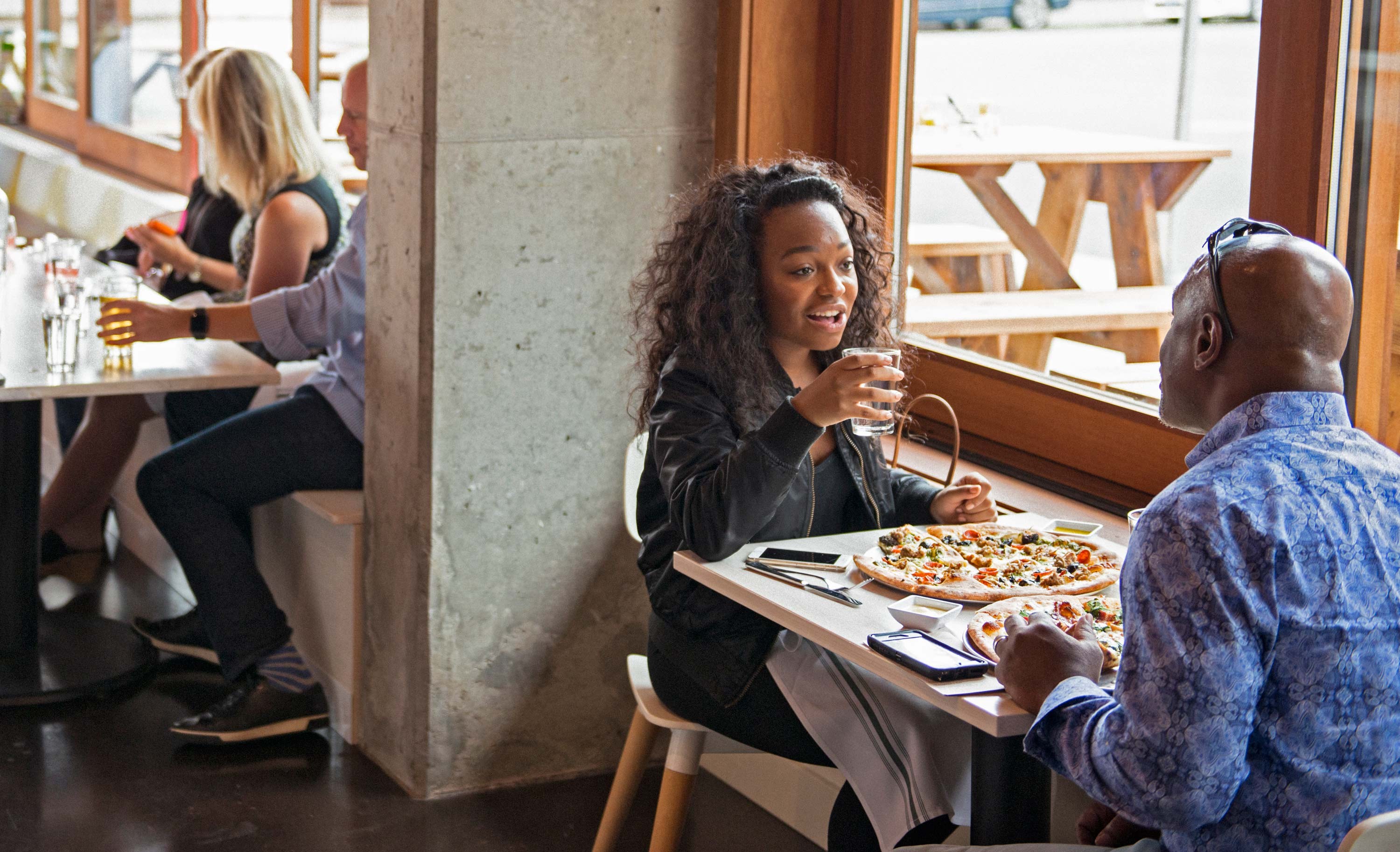 Please Louise sits in a corner space that's been sparsely but tastefully decorated with white tile, Edison bulbs, and white office chairs. There's an obvious juxtaposition with the dark, street-styled P.R.E.A.M., which was the first Portland restaurant fully to embrace the clubby aesthetic of big-city spots where you now find DJs spinning hip-hop throughout the meal. Louise plays exclusively '60s music, from the Beatles to the Supremes, at moderate volume. It's the stuff my dad listened to on road trips, and everyone likes it just fine.

The music is actually a decent metaphor for the pies at Please Louise, a nice little neighborhood shop that denies any specific geographic lineage with a thin but low-tang crust that's best thought of as New American Pizza.

The dough is tossed behind the bar and baked in a Bakers Pride electric oven. The crust is light on bubbles and the few on there don't get baked anywhere near blackening. It's perfect for those people who maintain Ken's Artisan and Apizza Scholls "burn" their pies. All five pies we tried at Louise were well-composed but not especially adventurous—seared scallion, arugula pesto and Gorgonzola are as exotic as it gets. I preferred the meatier options, especially the fennel sausage with a nice spritz of Calabrian chili ($16).

The salads and appetizers are a bit more adventurous, and that's not always for the best. Nothing was a dud, but few elevated the overall experience.

Take the roasted carrot and hummus salad ($10) with oil-cured olives and bitter watercress. It offers not only strong flavors—watercress is extremely bitter, the olives are extremely salty, and the fire-charred carrots had a lot of smoke—but no obvious path forward, since everything sits on a blanket of hummus spread. You have to sort of awkwardly fold the greens into the hummus and scoop it out with a fork, the stems of the watercress poking out of the clay-colored spread like a Chia Pet.

We had much better luck with the basic mizuna garden salad ($8), lightly dressed with a vinaigrette, and an arugula salad topped with shaved goat cheese, green olives and crispy spring onion fried like onion rings ($12).

In addition to the pies, the Please Louise kitchen is working on making its own sausages. Most are in the French tradition—think duck liver brulee, potted pork confit and country terrines. I'd personally prefer Italian-style sausages like mortadella, 'nduja, soppressata and cotechino Modena with spice blends that would make a more natural complement for the pizza, but the country terrines plate ($12) was very good and generously appointed with meat, pickles and mustards.

The drink program is small and rather tame. Breakside makes about 100 beers every year, but the only two on tap here are the Pilsner and IPA. Among the cocktails (all $10), you'll find house recipes built from classics with one small twist, such as an Old Fashioned with maple syrup and a local take on the French 75 that adds some blackberry liqueur.

When it comes to cocktails, I have higher hopes for Please Louise's new neighbor, Solo Club, which will open down the block very soon. And my hopes are higher still for the third Breakside location, opening in a neighboring building this fall.