Portland Has Great Korean Food. Here Are Our Favorite Places.

Did you know Beaverton has a neighborhood colloquially known as "K-Town?" Well, it does—part of the Portland area's impressive lineup of Korean food. Here are our favorite spots.

After a mere month and some ups and downs, the jury is still out on whether this cocktail-happy, Instagram-friendly Korean-influenced spot from Seattle Beard Award finalist Rachel Yang belongs amid our top 50 restaurants. But there are two dishes that already rank among the city's must-order items. Mrs. Yang's spicy fried chicken with peanut brittle ($14) is a riot of crackle, spice, candied exterior and nutty punch, while the rice cakes are poker chips of pan-fried starch dressed with umami-intensive beef and black bean sauce.

The crunch on Fusspot's Korean-style fried chicken is so audible as to be startling, a Foley sound *CRUNNNNCHHHH* that you normally have to pay ad executives several thousand dollars to create in a studio. Among Portland's pop-ups, Fusspot is the cheapest ($12) and the most generous—four pieces of lightly battered and expertly brined fried chicken topped with a sweet gochujang sauce, served with sesame slaw and lightly dressed slices of cucumber. It will fill up most diners. WALKER MACMURDO

Dinner is from 5 to 7 pm every first Saturday of the month. It's $12 per serving. Tip and beverages are separate.

In Korea, it's not uncommon for country homes to have walled gardens used as an extension of the living space—in other words, they look a lot like the space housing Han Oak. I only know this because of the couple sharing the long, blond-wood table at Peter Cho's newish spot, which sits behind a reddish-orange door leading to the bowels of the Ocean food court. Han Oak is an impeccably designed, modern-minimalist space—my wife started shopping for its lamps while we waited for our smoked short rib in ssamjang sauce. Han Oak is making most of the same dishes you'll find at the better Beaverton Korean spots. Meat-wise, the experience is comparable. But by keeping a small, set menu, Han Oak is able to deliver exquisite versions of noodle dishes like hand-cut kalgooksu in rich chicken broth, dumplings stuffed with pork and bathed in black vinegar, along with rice cakes and bulgogi. I strongly prefer the dinner to brunch, and suggest budgeting for soju and Stiegls. MARTIN CIZMAR

This K-town Korean spot in one of Beaverton's endless strip malls offers a brilliant hot stone-pot version of bibimbap with fish roe, kimchi and rice ($11.95). It's delicious and a textural wonder, especially once the searing pot works it magic to create that crunchy rice crust the Spanish lovingly call socarrat. But if you want to splurge, go for one of the "Hae Rim Specials," in particular the spicy stir-fried pork with kimchi ($15.95), which balances hints of sweet and tart with not-too-intense spiciness.

You know you've arrived at a bona fide Korean barbecue specialist when the tables are kitted out with built-in gas grills and smoke-sucking hoods loom above. Choose from a dozen different cuts of meat ($17-$31) or, better still, one of the meat-plus-sides combos sized to the number of diners in your party. Wait for your harried server to drop off an outsized platter of proteins and ignite your burner. Cook your own and stagger home sated.

Stashed away upstairs at G-Mart Asian Grocery, Spring Restaurant is a place you end up only by word of mouth. But people are guaranteed to talk; Spring serves lovely housemade udon as well as the most balanced bowls of sundubu jjigae (spicy soft-tofu stew, $9.95) you'll find in the metro area. The surprising tang of the stew is a fantastic counterpoint to the salty funk of the fish sauce and red pepper paste that bubble away in molten broth.

Among the cluster of Korean restaurants in central Beaverton, Nak Won is the standout.

Contrasted with customarily utilitarian premises, here the lights are dimmed a bit, seating is comfortable, and service flows smoothly. Lest it be confused with a date-night contender, the 60-seat dining room features several big-screen TVs, blaring what we presume to be favorite programs from the ROK. On a late-summer Monday night, the place was full with a short wait.

The menu of solid Korean standards, with photographs included for initiates and the faint of memory, offers abundant options to follow the included six-dish ban chan presentation highlighted by brick-red cabbage kimchi, slices of bean jelly and a seaweed salad. Stews and soups are abundant and delicious. Consider the stir-fried spicy octopus ($17) or squid ($16) with vegetables, a mounded platter partially immersed in red, moderately hot, slightly sweet wok liquor.

Carnivores and the less adventurous will favor the generously portioned kalbi-style cross-cut short ribs. The sweetly glazed slices are thin-cut and tender, with just enough tug to let you know it's beef you're biting into. For larger groups, several dishes can be super-sized for $38.

This super-casual spot in Beaverton's Little Korea is understandably popular with locals. Instead of the usual stews and stir-fries, go for something edgy like Korean blood sausage in a steaming bowl of soondae guk (pork intestine soup, $11.95). Emulate Korean restaurant practice by pressing your tableside server call button to reorder your favorite complimentary ban chan sides. 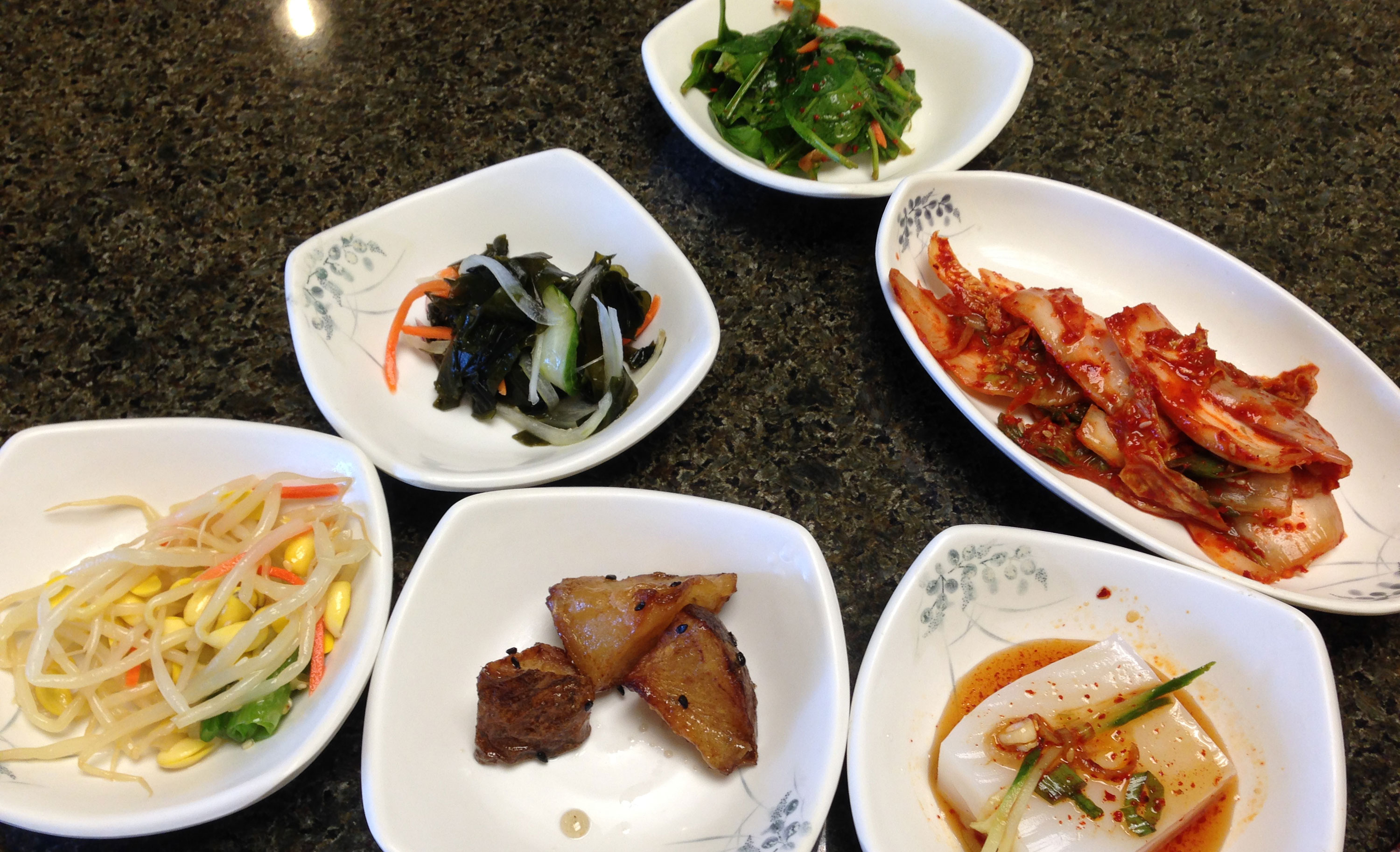 Beaverton might be the capital of local Korean food, but for eastsiders, the Fubonn Shopping Center is much more accessible. You can wave in tofu dishes by the dozen or stick to standards such as the thinly sliced beef bulgogi—good enough to feed two, including a hungry teen—or go with the house specialty sundubu jjigae, custard-soft tofu sizzling with spice in the pan.