We Ate at Every Cart at Southwest Portland’s Kebab Corner Looking for the Best Hummus, Chicken and Lamb

Here's the best of each.

America is a land of opportunism.

Our businesses look for niches—which is why neighborhoods in Portland, like most American cities, tend to have one of each thing that a neighborhood needs. And it's why food cart pods will keep the same crappy burrito cart for years even when there are other, better, burrito carts willing to compete for business.
In other parts of the world, goods and services tend to be clustered. If you want shoes, you go to the shoe street. If you need a camera, you go to the camera corner.

Which maybe helps explain why there are more than a dozen gyro, shawarma and kebab carts crammed together at two pods downtown. More than half the carts at the pods, one at Southwest 10th and Alder and the other at Southwest 3rd and Stark, serve basically the same menu. We're not the first to notice this: After we started this story, we discovered that Mercury food critic Zahir Janmohamed had dubbed the 10th and Alder pod "Shawarma Square" earlier this year.

Janmohamed picked the Lebanese shawarma at Sam's Saj as the best there. So, as we celebrate Portland's culinary clusters for for Cluster Feeding month, we headed to the other kebab corner in the Gyro District, Southwest 3rd between Stark and Washington, where we ordered pitas topped with chicken and lamb, and a side of hummus.

At the pod on Southwest 3rd, many of the carts are run by recent Iraqi immigrants. It's hard work with long hours—especially unpleasant on our visits, on days when the temperatures on the street soared above 100 degrees. There aren't many other options according to Saad Alameri, a friendly and chatty
Baghdad native who runs the Moonlight Mediterranean Food cart.

Many of the Middle Eastern people who've made their way to Portland have been boxed into the carts by the economics of American restaurants and convenience stores, which often make much of their profit off alcohol.

"We're Muslim, so we don't sell alcohol," Alameri says. "We can't make any profit off alcohol, that's haram. We have people come here after drinking. One night a man, a Muslim, came and asked me if my meat was halal. He's drunk. I say, 'Why do you care if it's halal! You've been drinking alcohol, that's already haram!'"

Alameri is also proud of his halal food, particularly his chicken shawarma and the spicy red sauce he adds upon request, which he says was a game-changer when he opened here in 2010.

"I brought this from my country and it was very popular, so other people started doing it," he says.

Chatting with the operators of the other carts here, we discovered that all had something they're proud of—and a few opinions on what their competitors could do better.

Here are our picks for the best things at each.

ElMasry [Best Hummus]
243 SW Washington St., 503-515-6444.
The original gyro cart in this pod has been open for nearly a decade now, starting in May of 2009. The cart is named after one of Egypt's oldest soccer clubs. The thing to get here is the hummus, which is quite different than the others on the block, an extra-saucy and nutty version that we scraped dry, the only one to meet that fate. The lamb is cooked on the flat-top and did not have a lot of character, while the chicken was a little stewy for my taste. 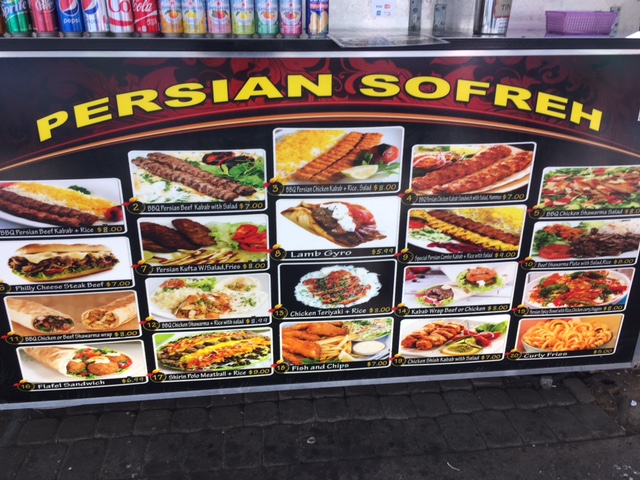 Our favorite lamb came from this cart. They slice it fresh off the spinning cone, unlike any of the others on this block during our visits. We picked it without knowing that, though—it's fatty and light, dense with flavor but with a pleasant softness. The chicken here is interesting, as it comes in a heavy curry sauce. The hummus has an oatmeal texture and is, oddly, garnished with two cobs of baby corn. 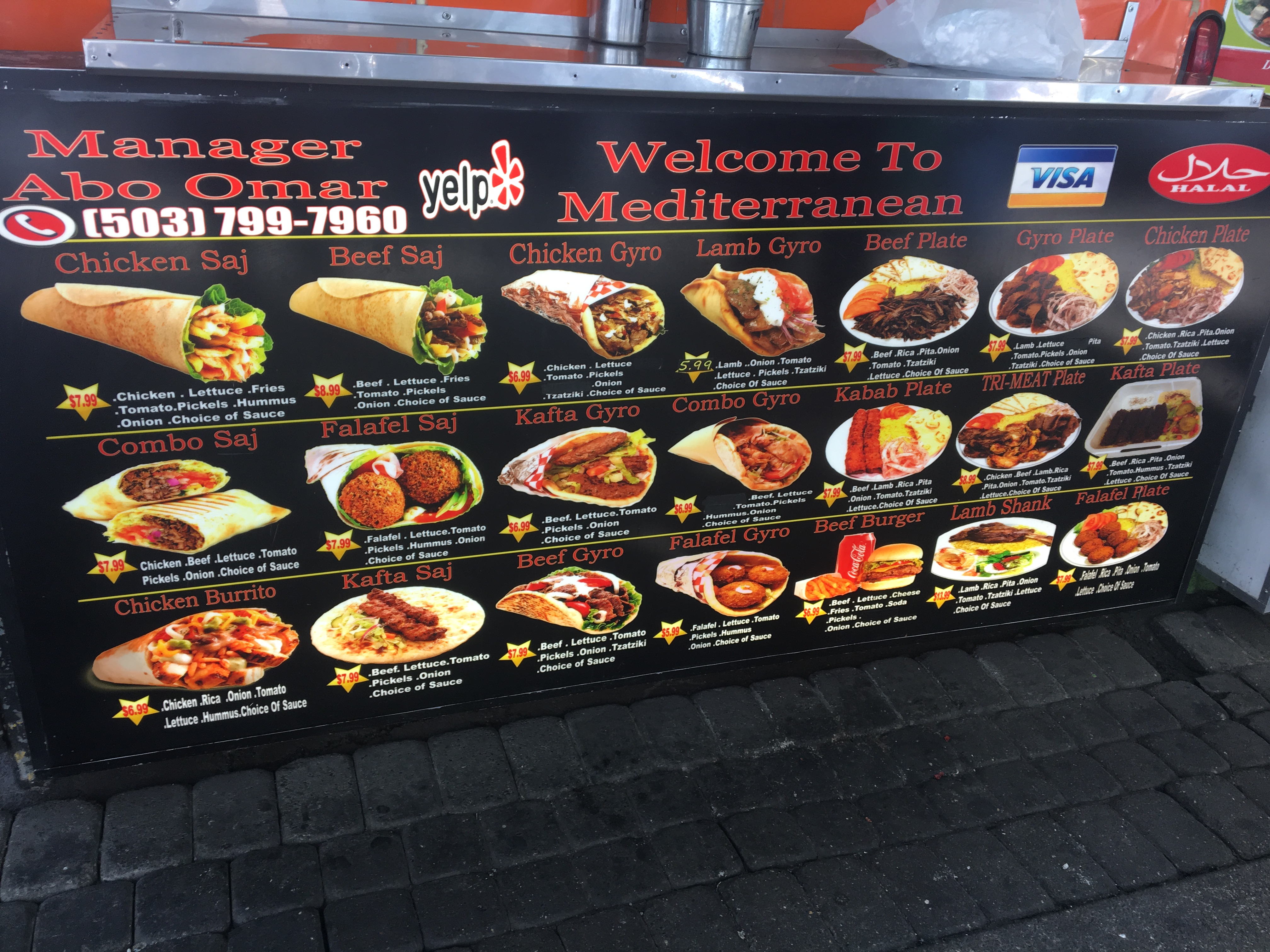 Are you in a hurry? This cart had our order bagged up to go before the others had swiped our cards. Unfortunately, that speed was paired with chicken that had a frozen pot-pie flavor and the worst hummus, which tasted like freezer-burnt cardboard.

Casablanca's Best BBQ Chicken on Charcoal [Best BBQ]
426 SW 3rd Ave.
This recently opened cart isn't your typical shawarma, instead using charcoal-cooked chicken for their cigar-shaped wrap. It's smokey and pleasant chicken that recalls the stuff grilled up for family barbecues. They don't have a hummus side, instead selling a mini mezze platter with loose, soupy grape leaves.

Moonlight Mediterranean [Best Chicken]
232 SW Stark St., 503-208-0019
There's a cone of lamb pictured on the side of the cart, but Alameri gave it up because of the hassle, instead tossing a few thin slices of frozen lamb on the flat-top then topping the gyro with two cream sauces and a little spice. It's a hulking pile of food for just $8. The main draw here is the chicken, which is fresh and well-seasoned. It gets even better with the hot sauce and creamy white sauces. The hummus is super-creamy and was our second-favorite behind El Masry.

Philly King [Best Off-Menu Item]
230 SW Stark St.
Despite the cheesesteak on the menu, owners of Philly King aren't from Philadelphia—they're from Baghdad. Their sour-yogurt-tzatziki-drenched shwarma and gyro weren't among the best on the pod, but Philly King's owners were nice enough to let us sample the secret menu item stewing in the crock pot: a rich, delicate, bone-in lamb-shank soup they serve up only to special customers. We were honored to be deemed special enough to try it.