We Ate at 27 Taquerias in East Portland and Gresham. These Are the Best.

Try the city's best tacos for $1.25 and agua fresca that’s the liquid essence of summer itself.

Portlanders like to tell you that all the best tacos are in the boondocks, way out at Ochoa's in Hillsboro and Luis's in Woodburn. Amid the arid-meated taco deserts of inner Portland, it's easy to believe that a great Portland taqueria is not only nonexistent, but an oxymoron.

But starting at about 120th Avenue and extending into Gresham, some of the most vital Mexican communities near Portland lie to the east, with a wealth of taco trucks serving the communities whose food they cook. I spent the past month trying to eat at all the taco trucks, carts, tiendas, shacks, supermercados, carnicerias and flea markets at the edges of Portland and Gresham. I made it to 27 of them, picking up at least four tacos at each place. The finest rank among my favorite tacos anywhere in Oregon. Here are the eight best. 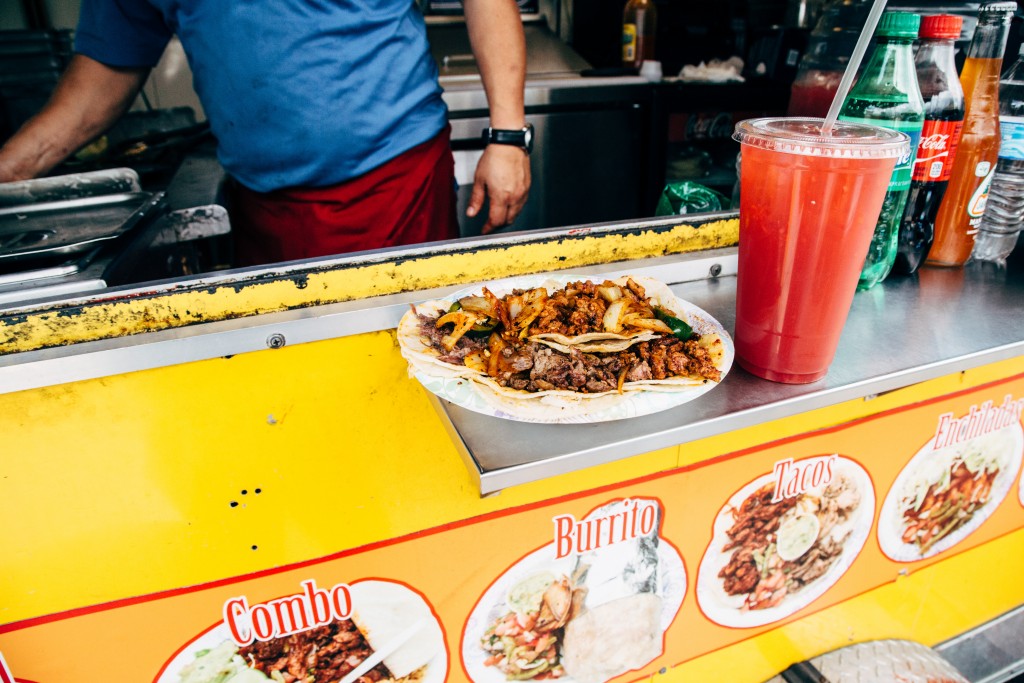 Twelve hours a day, five days a week, in the parking lot of a tire shop next to a hard-luck bar called Happy Landing, Jose Graciano and his son serve the best tacos I've had anywhere in Portland. The tortillas, which Graciano has arranged to get fresh daily from Las Cuatro Hermanas in Hillsboro, are the perfect taco holder—thin and supple, and earthy with corn flavor.

Each plate of tacos ($1.25 each) comes with a lightly charred, caramelized bloom of onion, and maybe grilled serranos. In front of the cart—in a pleasant, covered dining area that might be showing the Copa America on a flatscreen—are four fresh, flavorful salsas and trays of brightly acidic pickled jalapeños and onions. And yet I don't need toppings for these tacos. Graciano's meats are masterful from the top to the bottom of the menu. Hard-to-perfect meats like delicate lengua (tongue) and cabeza (beef head) are gently seared and spiced to perfection, the carnitas rival the best in the city, and the asada is booming with beef flavor.

Graciano tends to mix up his recipes a bit, so the pollo one day may come as chicken chunks so intense you'd swear they're confit, and the next time shredded and juiced up with bright notes of pineapple. This is a feature, not a flaw. While many taquerias excel at one or two specific proteins, Los Michoacanos is the one place we don't need to bother telling you what to order. Just show up and eat.

Way back two weeks ago, I would have told you there's no way any place near Portland could approach the carnitas at Tortilleria y Tienda de Leon. Those were more innocent times.

Amanecer, a Michocan-style cart that pops up in a parking lot at the back door of a near-unmarked flea market only Friday through Sunday, has the most flavorful carnitas I've eaten in Portland—just a bit of crisp, flat-top edge and more pork than a farm bill, bursting with flavor that's impossibly intense and almost delicate.

Tack on a rich, light-yellow, real-vanilla agua fresca that's like the liquid essence of ice cream and summer itself, while eating on a picnic table in the shade of an enormous oak tree, and you've got one of the singular dining experiences in Portland, except that it's Gresham. Also grab a birria de borrego (lamb) and beautifully spice-integrated al pastor, and note before you order that these $2 tacos are much bigger than most, served on large, thin corn tortillas handmade in-house. Alongside Los Michoacanos, Amanecer stands as East Portland and Gresham's finest monument to meat and corn.

I don't go to Tienda de Leon for tacos. I go for guisados—Mexican stews such as the almost heartbreaking pork nopales—and part-time specials such as amazing pork spareribs. But there are tacos, served on housemade corn tortillas with pollo, carnitas or asada. The carnitas have more juice than a Chicago loan shark, and the steak has a pristine flat-top sear and the lightest touch of caramel. And that pollo is a hearty world of dark-meat flavor, like pulled-pork barbecue made of chicken. All can be topped with de Leon's distinctive salsas—including their addictive, lettuce-thickened salsa loca—and especially the note-perfect nopales. Note, though, that while the tacos are stunningly wonderful, the fillings are a different beast from most—slow-cooked as stews for hours rather than quick-grilled. They are impressively rich, but more cousin than sister to the tacos at, say, Los Michoacanos. 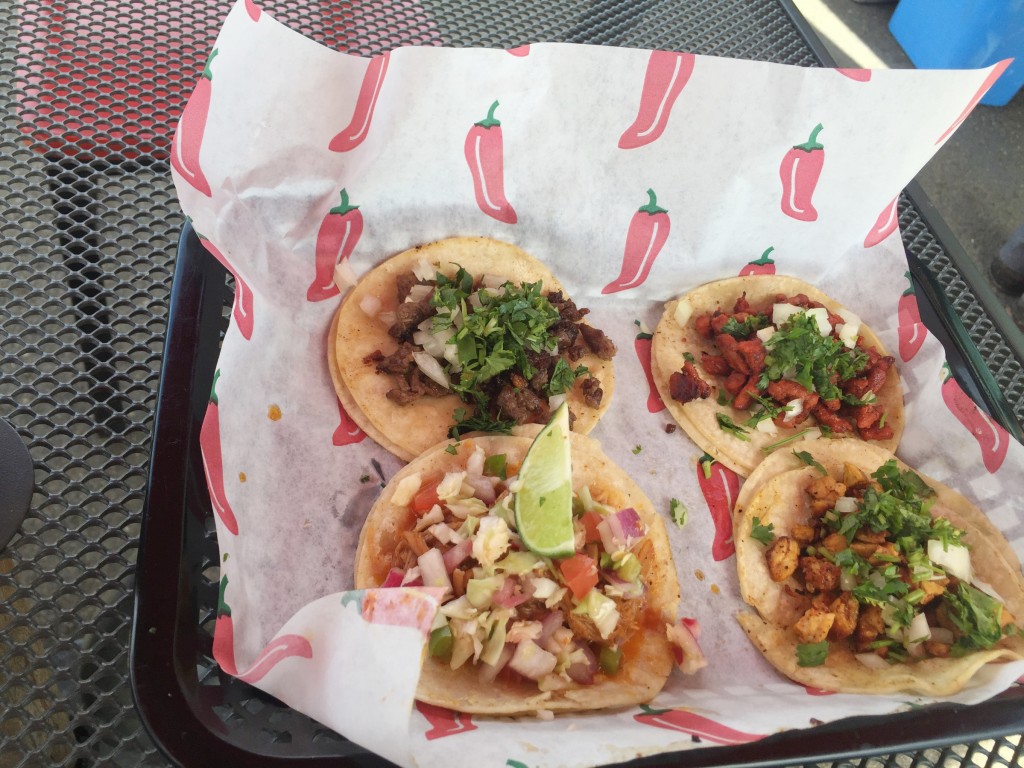 Manuel Pinto has only had his Yucatecan-style cart on Sandy Boulevard since the beginning of the year, in a desolate area at the edge of farms and warehouses. He has a downright gift for salsas—a sea-breezy lime habanero sauce singing with vinegar, and especially a red salsa with just a slight edge of pepper roastiness and a surprising complexity. But it's the cabbage-topped cochinita pibil—slow-roasted pork from the southern tip of Mexico—that's terrifyingly good, tender and citric. Except you should probably get the meat not in the taco but on a panucho, a little dual-wafer tostada stuffed with a thin layer of black beans. Note, also, that the cart is pretty versatile: A Latino family eating during our visit had ordered, instead, a juicy, stacked burger and one of the best-looking club sandwiches I've seen in town.

Taqueria Mi Mole looks on the outside like a Wendy's that's been firebombed, and its name makes it seem like a spinoff of inner Portland's Mi Mero Mole (it's not, but its chef worked there for years). But within, it's a homey restaurant with stuccoed walls and families enjoying plates of panuchos and moles, from smoky Oaxacan to a rich mole poblano to the best of these—the granular, lime-green heaven of mole verde. Among the tacos, asada is king. Of all the taquerias we visited, this asada tasted the most like the ones at the Mexican beefhouses of West Texas, where cows are a way of life. Taqueria Mi Mole's asada tacos are like flat-iron steak in taco form, topped with spice and thick with marinated flavor. The corn tortillas were a bit doughy, but that beef? Flawless.

Tripas (beef intestine) is an underrated meat. It's difficult to do well, its texture too often rubber under the wrong spatula. But when good, it's so damn good—meaty protein with a deep and complex undertow that nags like memory, with as much caramel as any candy. Well, the little family shop next to Supermercado Mexico—which serves whole fried fish, and opens for breakfast with a "Dember Homelett" but does a ridiculously brisk takeout business in tacos—served up my favorite tripas of them all, just barely edging out Los Michoacanos' lovely version. The secret is crispness without crunch, and here it's perfect; Mi Pueblo also pan-sears its carnitas on the flat-top for a welcome charred edge.

This lone O.G.-era, van-style food truck with red script faded into equally faded white paint—near the strip clubs and party bars of Gateway—is one of Portland's only truly good late-night taco carts. There's nowhere onsite to eat except atop an abandoned oven in front of an old furniture shop. But Los Franco grills up a spice-saturated al pastor taco that blends earthy notes of cinnamon with peppery zing and a bright pineapple slap to the pleasure centers. The buche, meanwhile—a bit like tripas, except it's pork—is a marvel of caramelized fat: tasty pork belly that's actually pork belly.

The Oregon Flea Market at the western edge of Gresham is a wonderland of frutas stands, smoothies, piñatas, phone covers, startling decorative kitsch and elegant western wear for tiny children. It's a bustling bazaar that can make you believe, briefly, that you have slipped the skin of America and crossed the border into an independent Latin country. Five taquerias operate within its walls, parking lot and meat market, but the one you shouldn't miss is Tacos el Buda, an inexplicably Buddhist-themed taqueria that shares a kitchen (but not a cash register) with El Rincon D.F. taqueria and makes expertly pickled onions and a barbacoa de borrego swimming in earthy sauce and rich with lamb flavor. Order from the far counter at the cafeteria in the flea market's center, and be well.

The Six Best Swimming Spots in the Columbia River Gorge

Something To Do Every Single Day This Summer

A Brief History of Mexican Cocktails

Hike These Six Bite-Sized Chunks of the Pacific Crest Trail

We Ate at 27 Taquerias in East Portland and Gresham. These are the Best.