Q may lack the roguish charm of the original, but it's a loving recreation

Not everyone was ready to see Veritable Quandary close after 45 years. But all good things must come to an end.

Last fall, VQ got the word that its landlord, Multnomah County, had secured the property for a new courthouse. It may have marked the end of VQ proper, but patrons and staff, including former VQ chef Annie Cuggino and general manager Erin Hokland, weren't quite ready to let the institution go. From that inspiration, the sequel, Q, was born at the corner of Southwest 2nd Avenue and Taylor Street. They live what they know, re-creating much of the VQ menu and its unique vibe, as much as that's possible in a new space.

Q may lack the roguish charm of the original, and there's no room for VQ's summer patio, but it's been lovingly (and expensively) built out, joining Headwaters at the Heathman Hotel to become a new dining option in the center of downtown, an area formerly dominated by counter-service casual spots and food carts.

As in the old VQ, the L-shaped premises divide bar from dining room, with a roomy foyer inside the door. The long leg of the "L" is the bar, which draws crowds of older regulars who swap tales over drinks and maybe a nosh along the sexy, sparkle-flecked black granite bar top. Tables and booths line the windows paralleling the bar. The dining area around the corner is filled with more comfortable seating, including a chef's counter topped with more black granite. The back bar, as well as walls, booths and ceiling, are milled from cherry wood with art deco accents. The overall effect is visually stunning—it's clear that no expense was spared to create a space as iconic as its predecessor.

At VQ, the Cheers-like bonhomie at the bar was a draw for regulars, as was a longtime staff that really did know your name. For the hungry, the attraction was a reliable—if not mind-blowing—meal crafted from a wide-ranging menu engineered by chef Cuggino. She now helms the Q kitchen, marking more than two decades combined serving many of the same ingredient-driven dishes. This is not meant to damn with faint praise. Instead, it's simply a caution that Q may not garner any Beard nominations or praise from Instagramming trendbaggers. It's also fair to warn that budget-driven diners may shy away from sandwiches and salads that tend toward the midteens, and dinner entrees that average above $25.

The classic Caesar salad served at Q ($10 small, $16 large) is a fine way to begin lunch or dinner. It doesn't quite have the garlic-anchovy-citrus zing of the best in town, but it's better than most. There are two or three additional salads to choose from, plus soups—including a green-chile-and-pork variety—and plenty of vegetables, both as sides and mains.

Regardless of the sandwich you select—be it the corned beef Reuben, the burger or a decent pulled pork cochinita—Q's fries are a must. Yes, life's simple pleasures include properly cooked skin-on, french-fried potatoes, and these crisp beauties are pretty much the gold standard. A recent chicken pot pie lunch special was ideal for a frightful winter day: the crust buttery and golden, with plenty of chicken chunks, mixed local mushrooms, carrots and cipollini onions in a rich but not overly thickened gravy. On a dinner visit, we enjoyed a petrale sole entree (accompaniments change seasonally) and a lamb shank from Cattail Creek. If I had to identify one consistent problem, it's an unfortunate tendency to overcook meat. 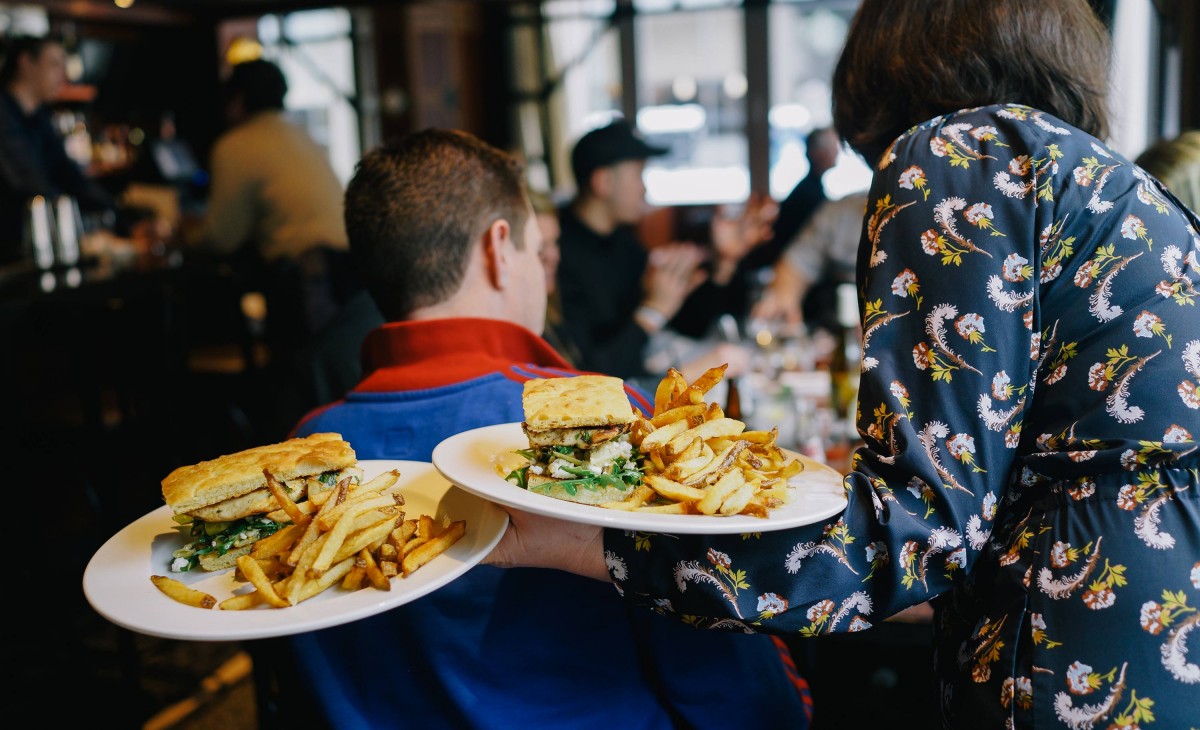 For dessert, there's an order-ahead chocolate soufflé to drool over—which is all I could do after an isolated service lapse—and a slate of trendy mini-desserts. If you stop by soon and see a seasonal fruit sorbet on the menu, order away—especially if it's the sweet-tart flavors of a recent blood-orange-and-pomegranate iteration.

No one can say whether Q can achieve the longevity of its predecessor. But by following a tried-and-true formula in the center of the city's government district, it's given itself a good chance.