Editor's note: Nick Zukin owns a Mexican restaurant in Old Town called Mi Mero Mole, which does not serve barbacoa. Despite his dedication to traditional Mexican cuisine—he spent the past few weeks working with a family that has been making barbacoa for nearly 60 years—we don't usually let him write about other south-of-the-border restaurants. But for Mexican Meat Month, we let him loose.

Oregon's Mexican food is often unfairly maligned by Texans and Californians who can't be bothered to make a trip to Gresham, Hillsboro, Woodburn or Salem. But friends do not let Mexican friends in Portland eat carne asada or al pastor, two taco meats that fall embarrassingly short of the native versions.

Related: We Ate at 27 Taquerias in East Portland and Gresham. Here Are the Best.

Instead, true friends of Mexican expats in Portland take their Spanish-speaking amigos for barbacoa, the verdadero weekend brunch south of the border. Not only is the average barbacoa taco at Portland taquerias enjoyable, the best could compete with roadside stands and trendy restaurants in the homeland.

Traditionally, barbacoa is pit-roasted meat, whole animals wrapped in agave leaves and buried in the ground and cooked over a pot of veggies in which the drippings make a delicious broth called consomé. Pancita, the stomach of the animal stuffed with a mixture of other innards, herbs, spices, and chili sauce, is roasted alongside. Lamb or mutton is the most common meat used for barbacoa in Mexico, but beef is the most popular here in Oregon. Goat is occasionally used, but generally saved for barbacoa's soupy cousin from Jalisco, birria (look for a survey next week).

I visited more than 40 Mexican restaurants and trucks in the Portland area to find the best barbacoa.

THE BEST OF THE BEST

A decade ago, the El Brasero cart at Hawthorne Boulevard's Cartopia pod was one of the best taco trucks in the city because of its excellent barbacoa de borrego—lamb barbacoa—a rarity at the time. But drunken late-night Americans and vegan hipsters don't order a lot of lamb barbacoa, leading to the dish's steady decline. The owners opened a sit-down taqueria on the edge of Gresham, and the barbacoa is better than ever.

El Brasero's broth is one of my favorites in town, a well-seasoned soup that's rich without being greasy. The barbacoa meat is simply prepared, without spices or heavy herbs, though not as luscious as others in the area. If you order the double-length barbacoa flautas, you can dip them in the consomé to moisten the fried meat inside. The only knock on the place is it doesn't serve handmade tortillas.

Until last year, the best Mexican food served at the Oregon Flea Market—the massive weekend Mexican bazaar at the edge of Gresham—was the barbacoa at El Buda. After reorganization pushed out all the best food vendors, I thought the succulent roasted meat was gone from my life forever. Then I saw an El Buda sign outside Everyday Deals, the shockingly green discount grocer, where, if you need it, you can sometimes buy a gallon of A1 Sauce for $5. 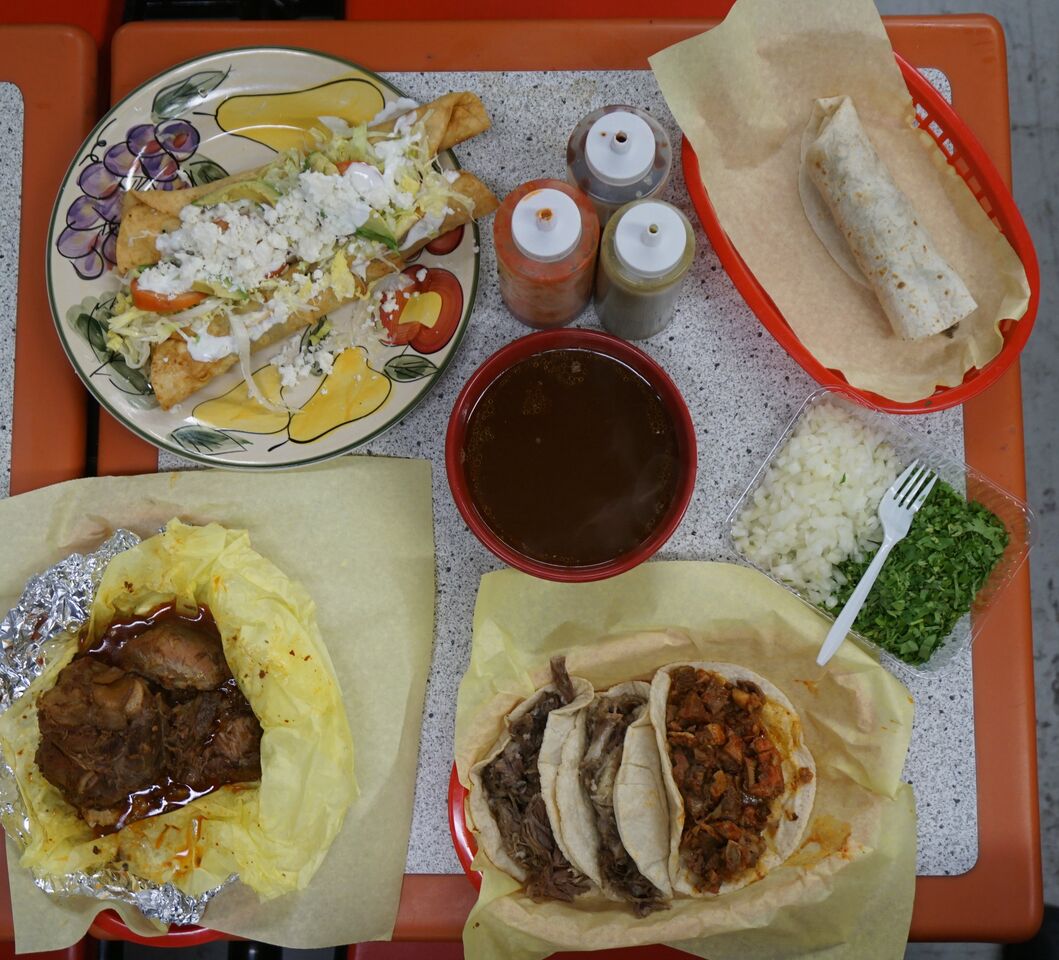 El Buda makes its tortillas by hand and its barbacoa from whole lamb, which means you can choose whatever cut you enjoy most, including the head, prized by connoisseurs. El Buda also makes a wonderfully aromatic pancita and even offers mixiote, the single-serving version of barbacoa originally made with smaller animals, like hare and fowl. El Buda's consomé is hearty and brick-red, and don't miss the smoky salsa morita, made especially for barbacoa from the darker sibling of the chipotle pepper.

Saturday and Sunday, I may sign the checks, but most days, it feels like I'm the adopted gringo son of the women in the Mi Mero Mole kitchen. So when I said I was sampling all the barbacoa in town, three women insisted I find this Aloha food truck. All week during the summer, it serves terrific tostadas of ceviche and other seafood. On weekends throughout the year, it also serves barbacoa de cabeza de res—beef cheek barbacoa. 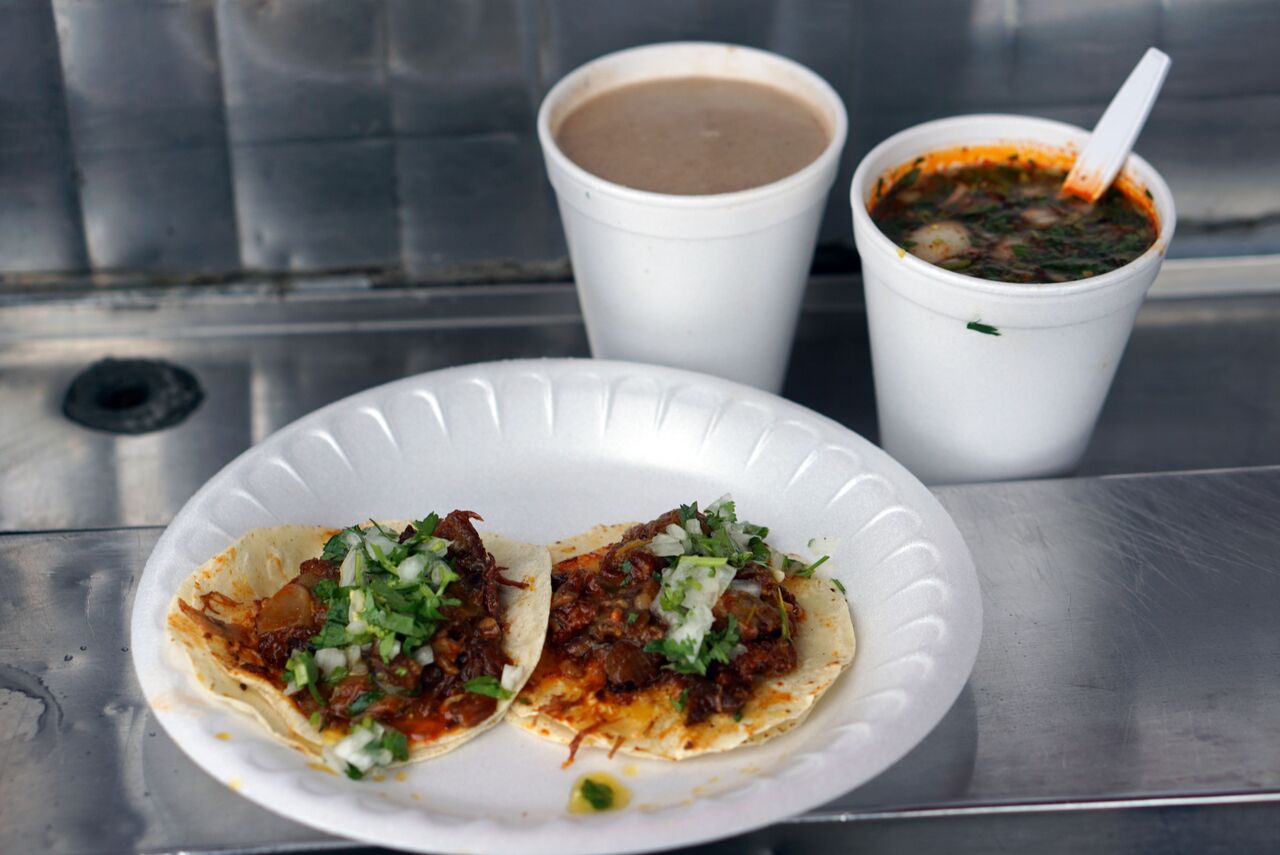 You can order barbacoa on tiny tacos of handmade tortillas or in consomé. The beef head is intense, luscious and tender, with light spicing offsetting some of the gaminess. You may want to ask to have the salsa on the side, and apply it according to your tolerance for lava. Its heat isn't measured in Scoville units, but by the rare-earth metals it can melt. 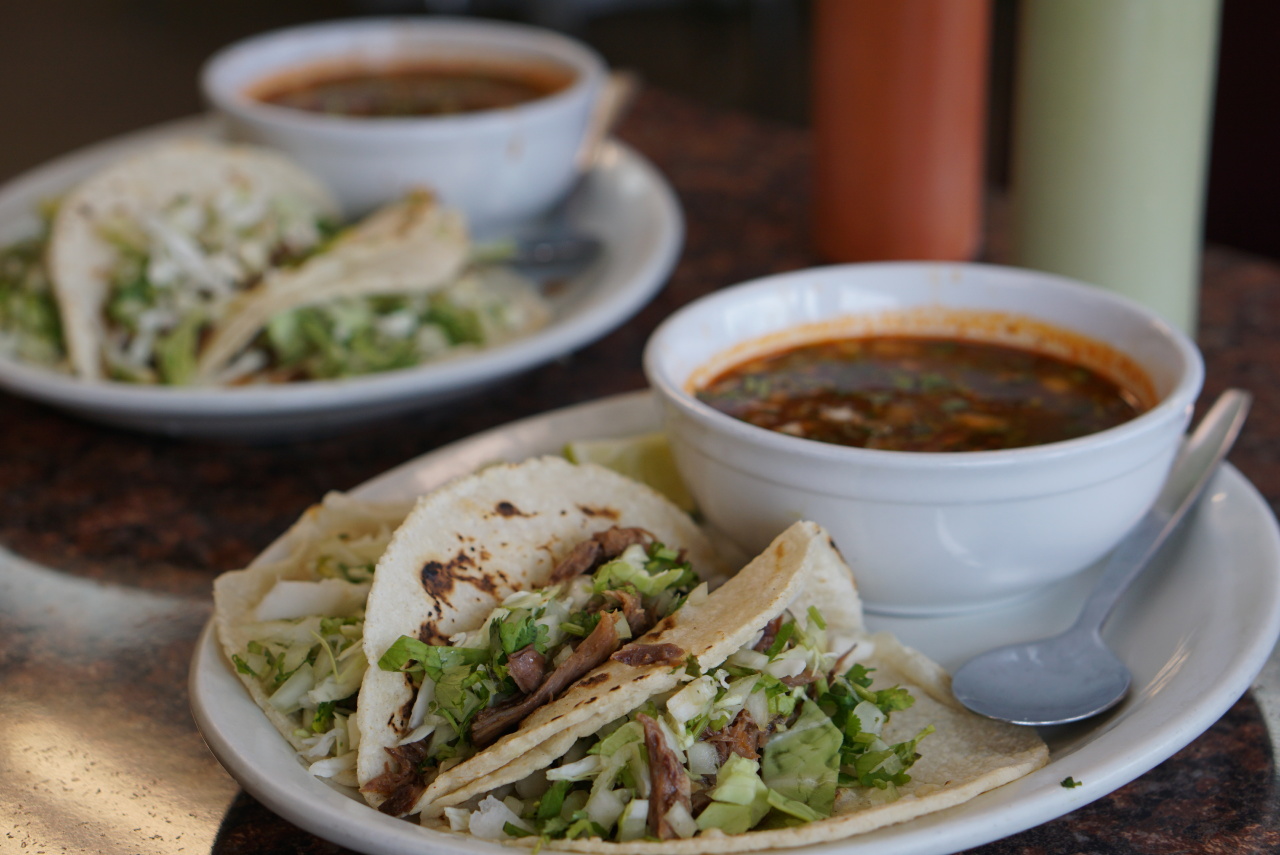 Unless you enjoy strip malls, Tualatin doesn't have a whole lot of fun beyond the camo-themed Disneyland that is Cabela's. But whenever I'm in the neighborhood, I stop at Las Casitas, the best taqueria between Portland and Woodburn. Las Casitas serves three versions of barbacoa, and they're all good. 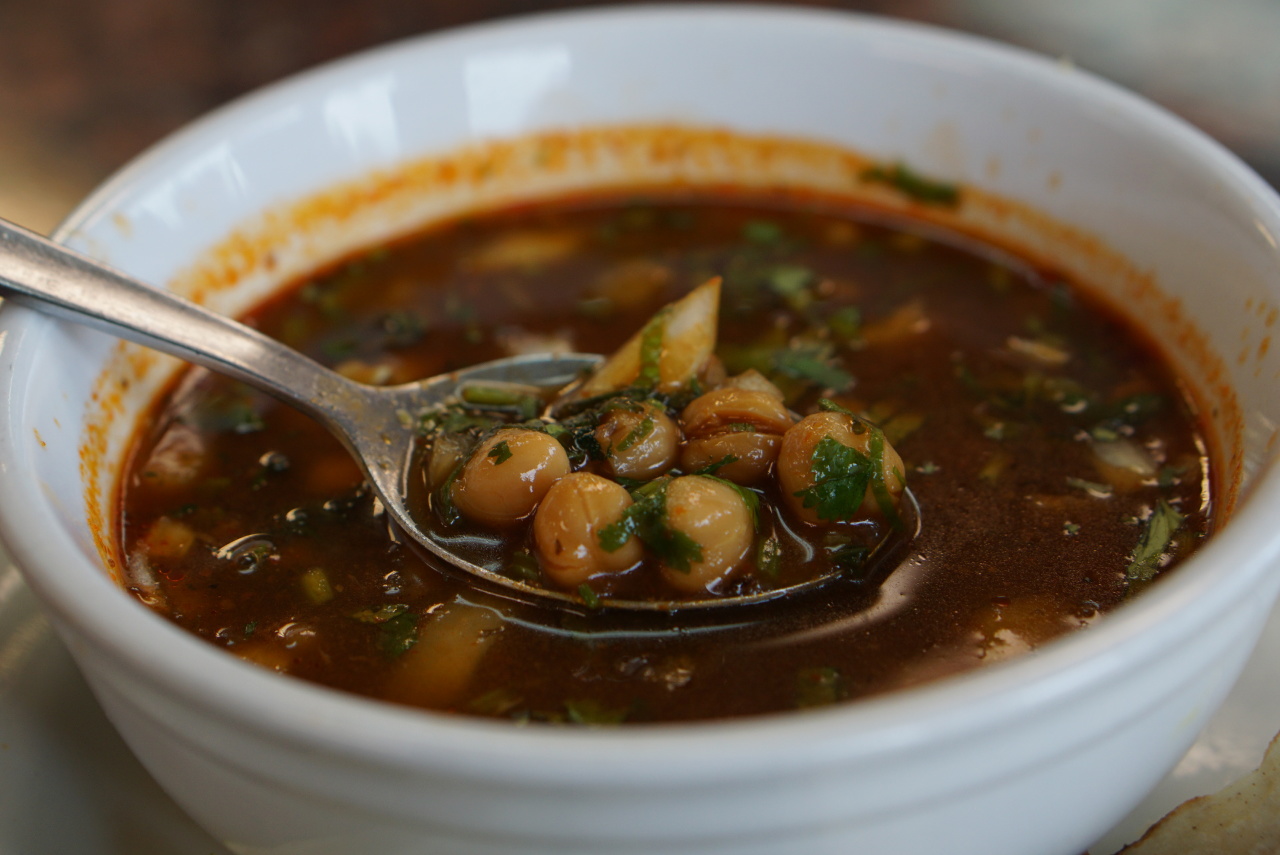 The best, the barbacoa de res, is cooked al vapor in an airtight pouch, leaving the meat moistened only by its juices and fat, concentrating the beefy flavor. The cabeza barbacoa has more spicing, and the borrego is available only on weekends. Try all three. The tortillas are handmade, and the owner is passionate about his food. 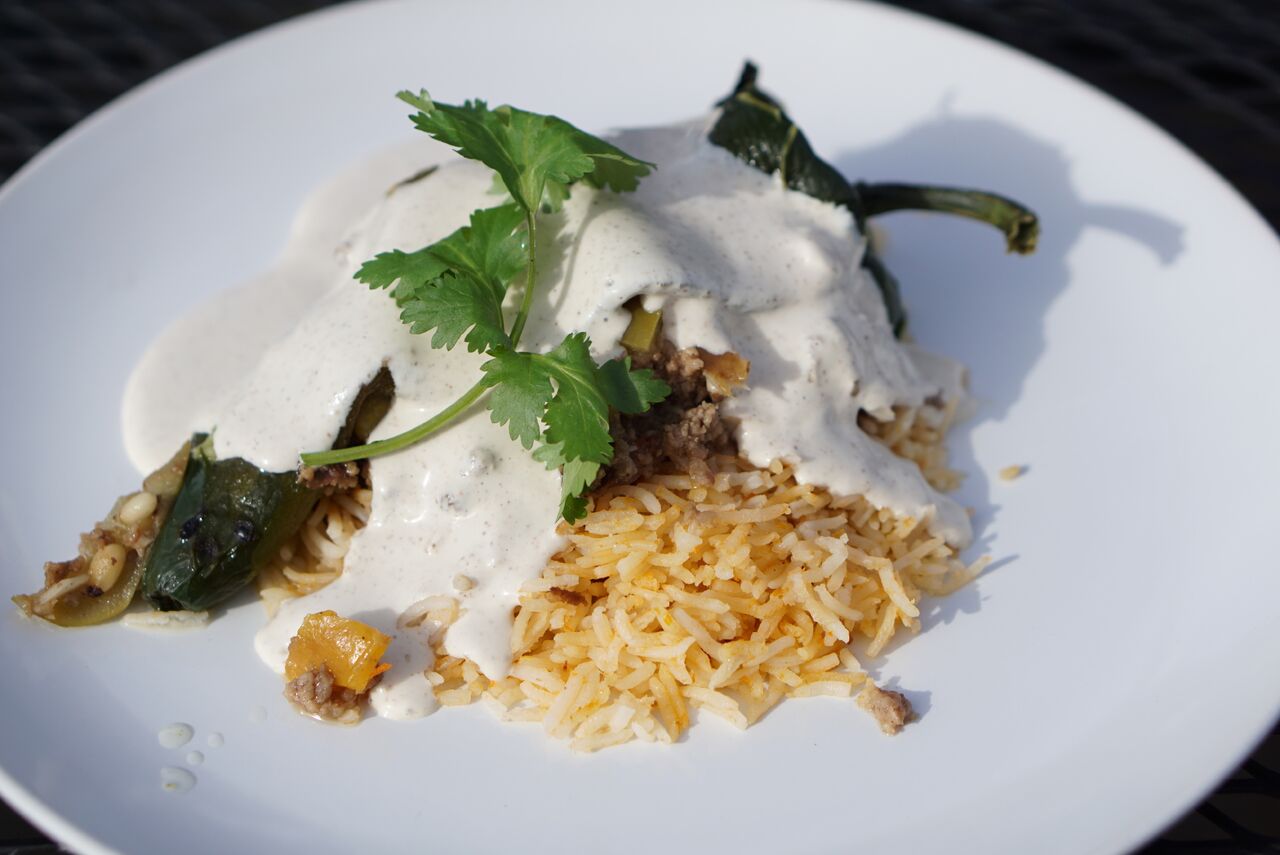 I met Juan, owner of Mis Abuelos, several years ago at his Cartlandia food truck. I was the only customer and interrogated him about his tortillas and barbacoa pedigree, which checked out as from the heralded state of Hidalgo. When I told him I owned a taqueria, he looked incredulous. It wasn't long before he was at my shop telling me what he disapproved of. But I didn't mind. He just gives a damn, and it shows in his delicious barbacoa. 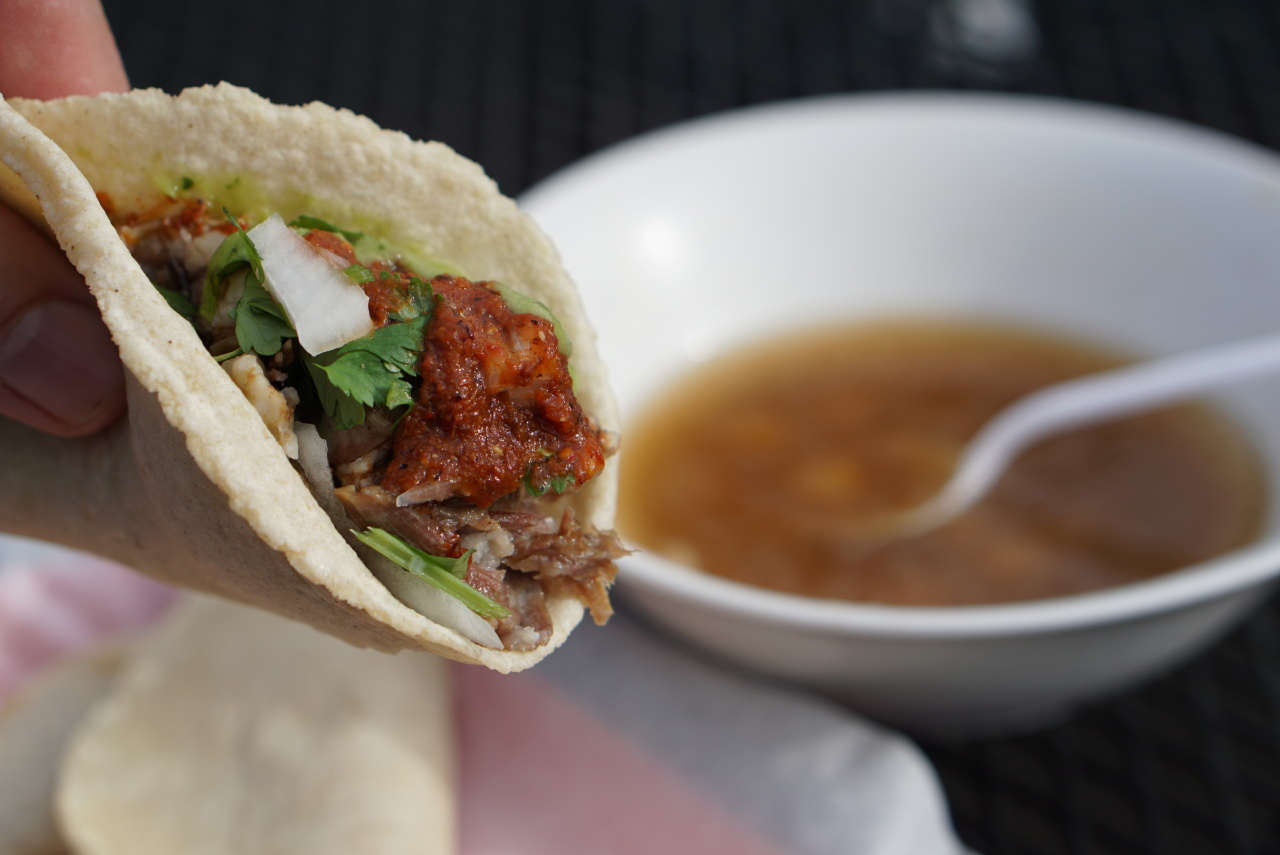 The lamb and its consomé are simply prepared, no chili or spices, letting the flavor of the meat and the maguey take center stage. The lamb has a nice fattiness, chopped into the rest of the meat, the way they do it in Hidalgo. The balance and seasoning are near-perfect. The meat even receives a last sprinkling of salt. 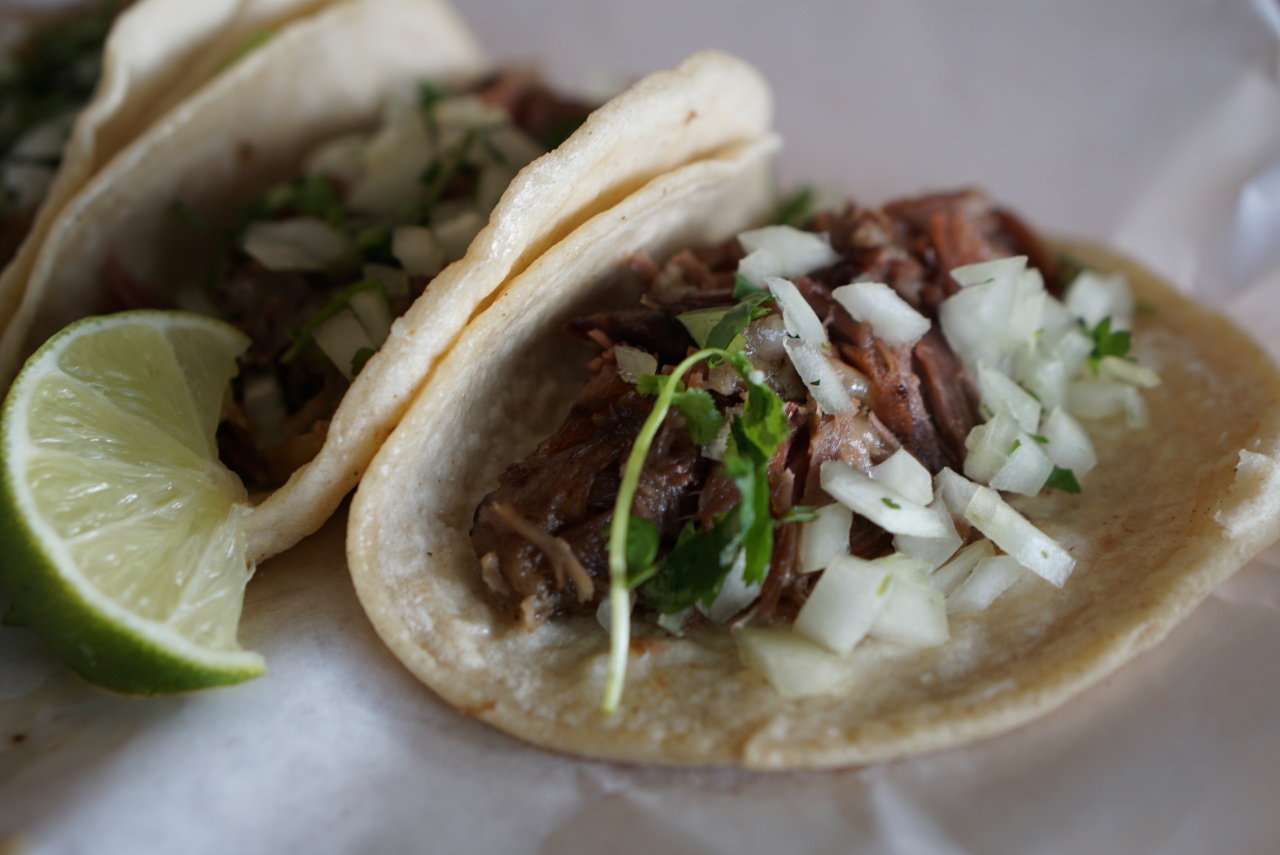 When I lived in Vancouver, I would troll for tacos on the 5-mile stretch between I-5 and I-205 on Fourth Plain Boulevard. It's a bit of a carnitas heaven in Vantucky. But even in that dense zone, La Raza stood out with a sign boastfully claiming "100% chingon": badass to the core. 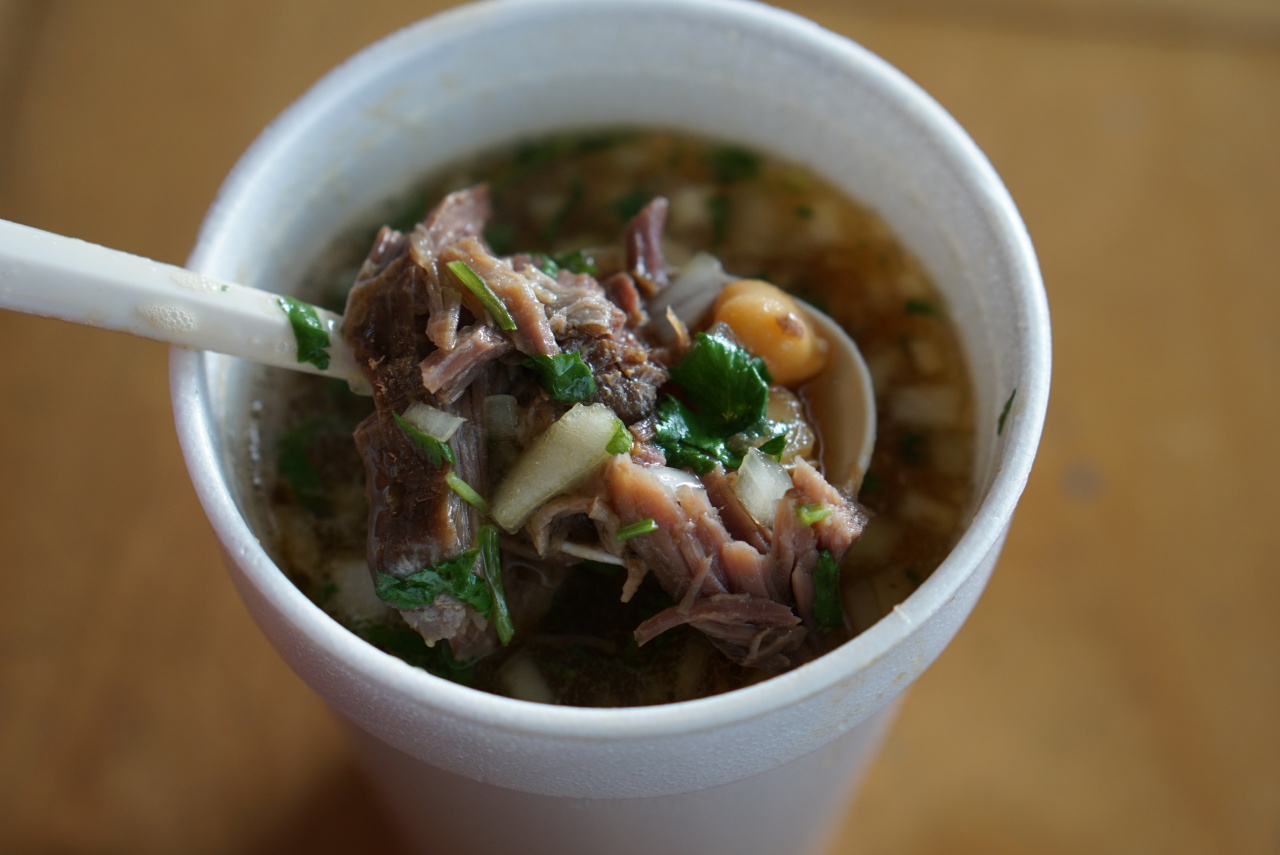 La Raza lives up to its hype. It serves from the original food truck, but there's also a sit-down dining room inside a dilapidated strip mall. La Raza offers lamb barbacoa in consomé or in tacos made with homemade tortillas. The meat glistens from melted fat. The rich consomé is aromatic and comes with or without meat. The spicy-sweet pancita is the best version I've eaten in the Portland area.

Be warned: The barbacoa usually sells out by 2 pm.

At one time, this Gresham Mexican retaurant in the same strip mall as the makers of the Portland's best ceviche, El Inka, was open late. Very late. A bowl of birria at 2 am after a 16-hour restaurant shift was heaven-sent.  And while the birria doesn't taste as good at 2 pm as 2 am, their weekend-only barbacoa de borrego is worth the trip to east county. 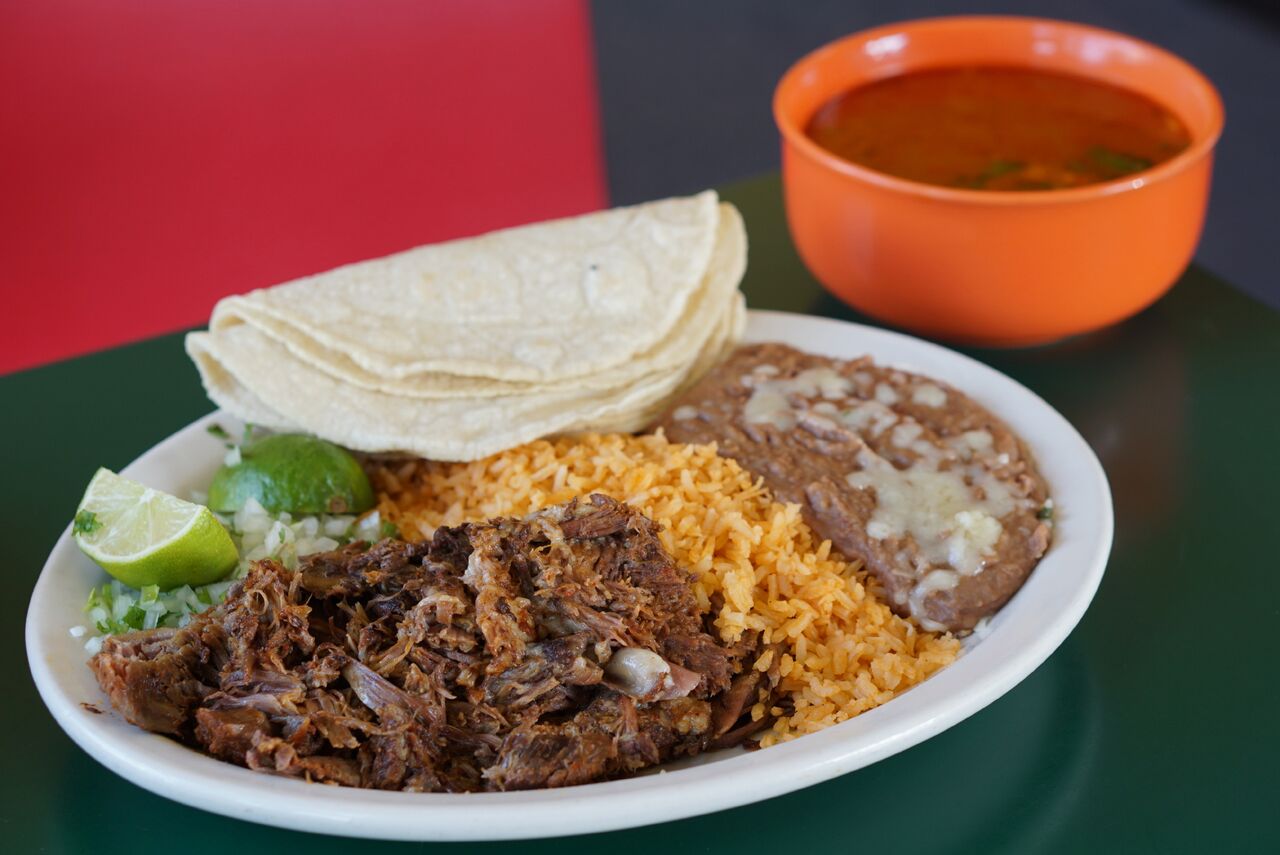 You can choose maciza, the gringo-friendly cuts, or surtido, which includes all the other parts of the animal Mexicans eat.  The lamb is delicately seasoned with a good mix of fat.  You can order the consome with or without meat.  Either way, it will come with garbanzos and rice in the soup with, uniquely, a bit of tomato blended into the broth.  La Herradura offers handmade tortillas on weekends only, so you'll always have them for your barbacoa.

At least since the days of Café Azul, Portlanders have been blessed with quality, upscale Mexican restaurants that usually only cities like Los Angeles, Chicago, and Houston get to enjoy. Nuestra Cocina has been serving a tasty mix of smartly presented regional classics for well over a decade, and packing in customers every night during most of that time. You don't have to pay $20 for good barbacoa in Portland, but Nuestra Cocina's is worth every cent. 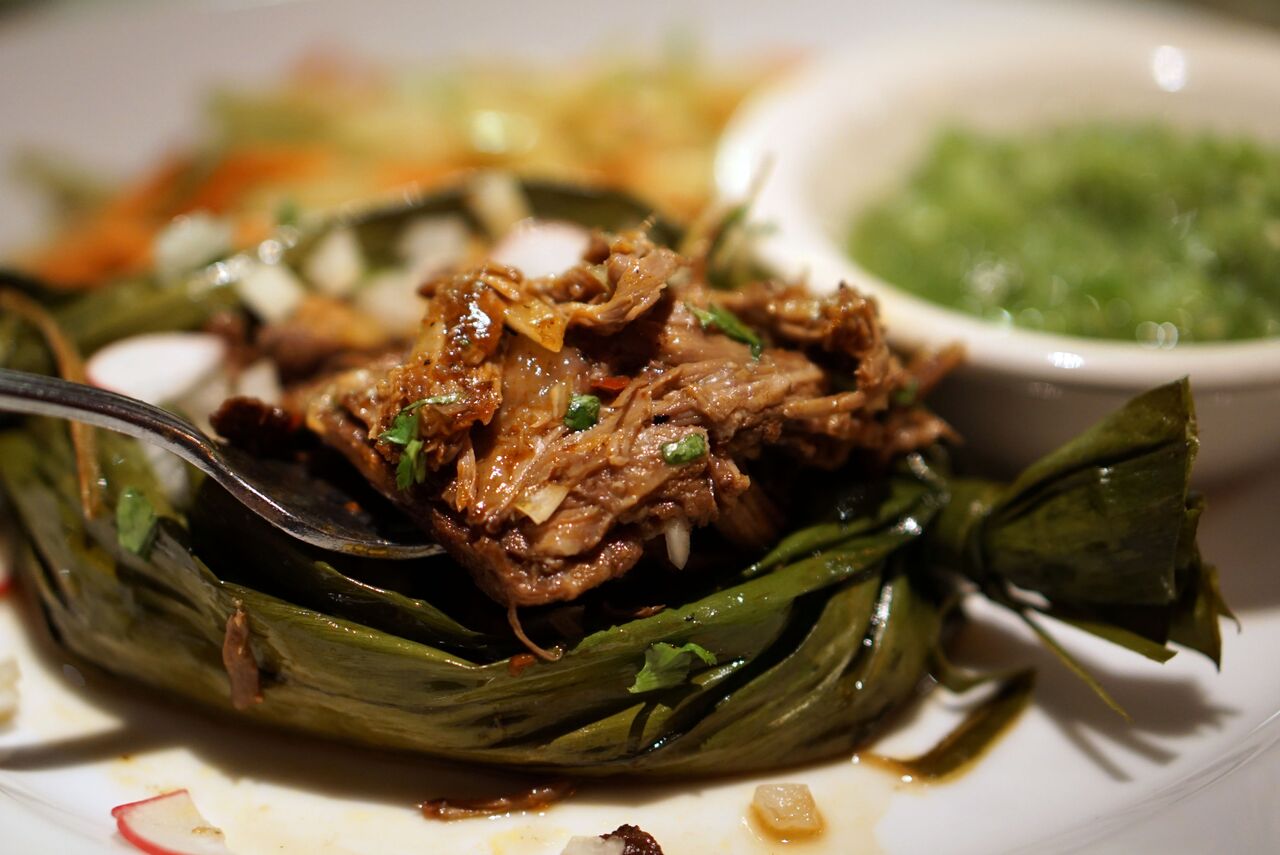 Chefs Benjamin Gonzales and Shannon Dooley-Gonzales offer barbacoa de cordero, lamb barbacoa. Technically, borrego is mutton, though most places serving barbacoa de borrego are probably using lamb as well, just because of availability.  The meat comes wrapped in plaintain leaf, like a little green canoe with a cargo of fragrant barbacoa sassed-up with chile and vinegar.  It's topped with sliced radishes and chopped onion.  A saute of mixed vegetables and fresh green salsa come on the side.  A basket of freshly made tiny tortillas come straight from being made behind the chef's counter.

TACOS
While you can't get the full barbacoa experience at these tiendas and taquerias, you can still get rico tacos to satisfy your carnivorous cravings.

Delicias Chihuahua
16100 SE Stark Street,in Su Casa Imports.
Despite only using the typical parts of the cow, their beef barbacoa has a light gaminess fans of cabeza will enjoy. At $1 per hefty taco, these are easily the best value in Portland. Too bad the tortillas are commercial grade. 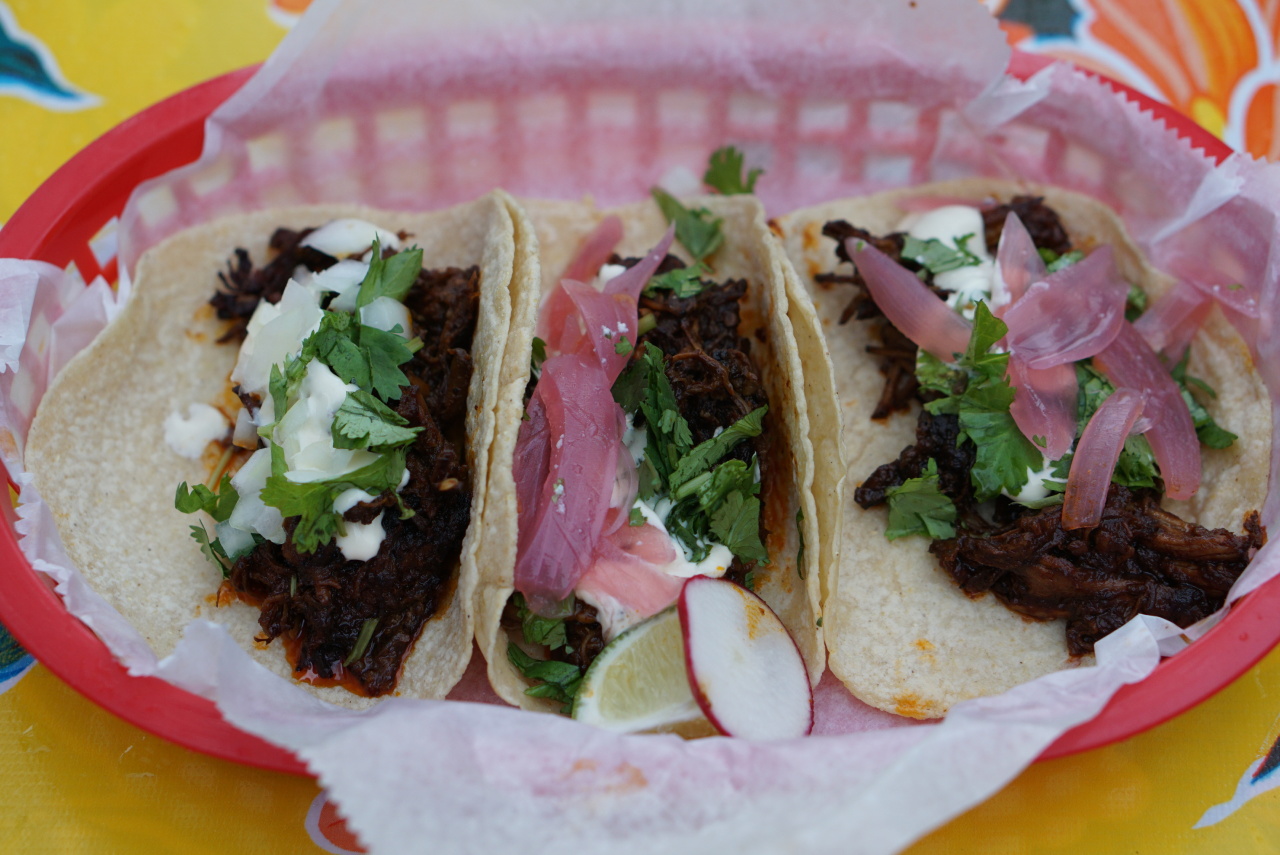 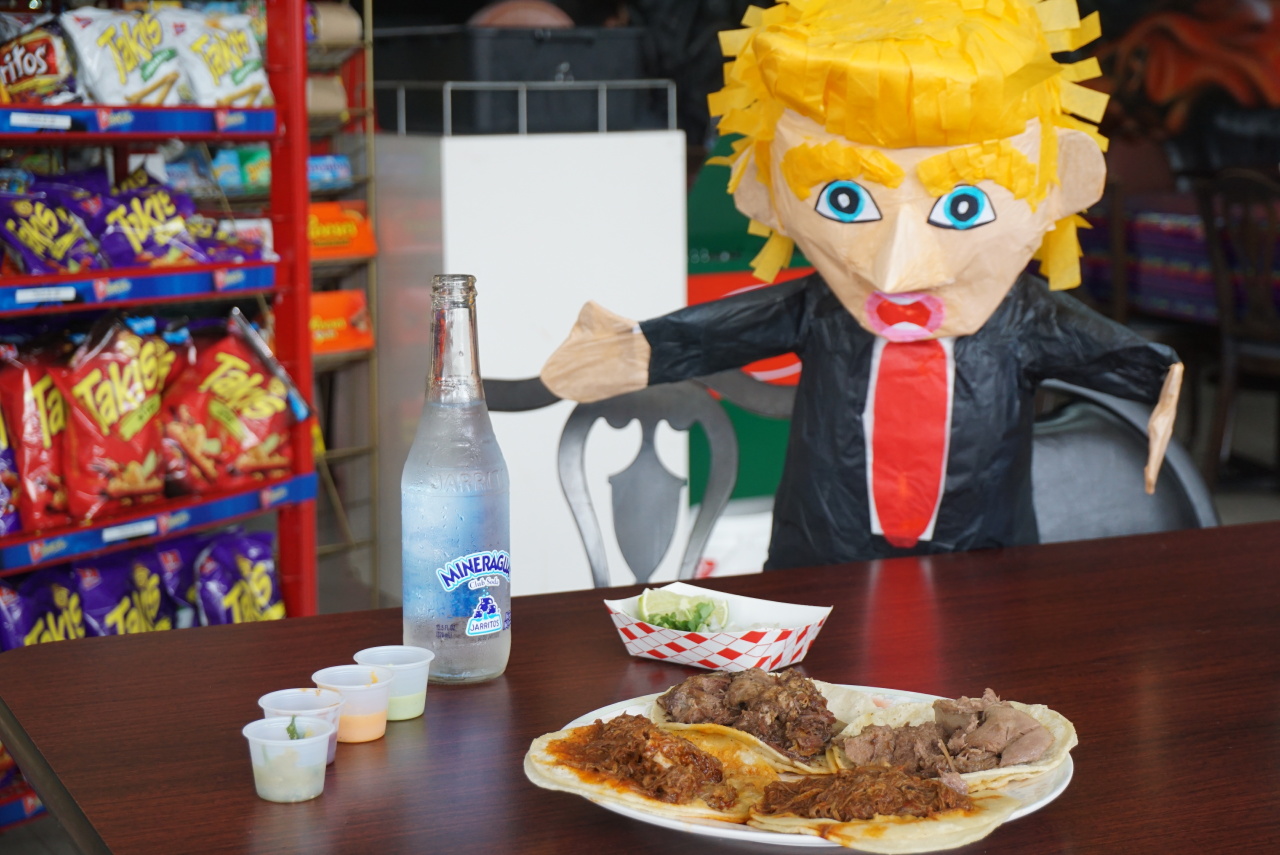 They cook a whole cow's head for an intensely beefy barbacoa de cabeza, Rio Grande Valley style, every weekend. Have just the tongue, or a shredded assortment of delectable cow face. 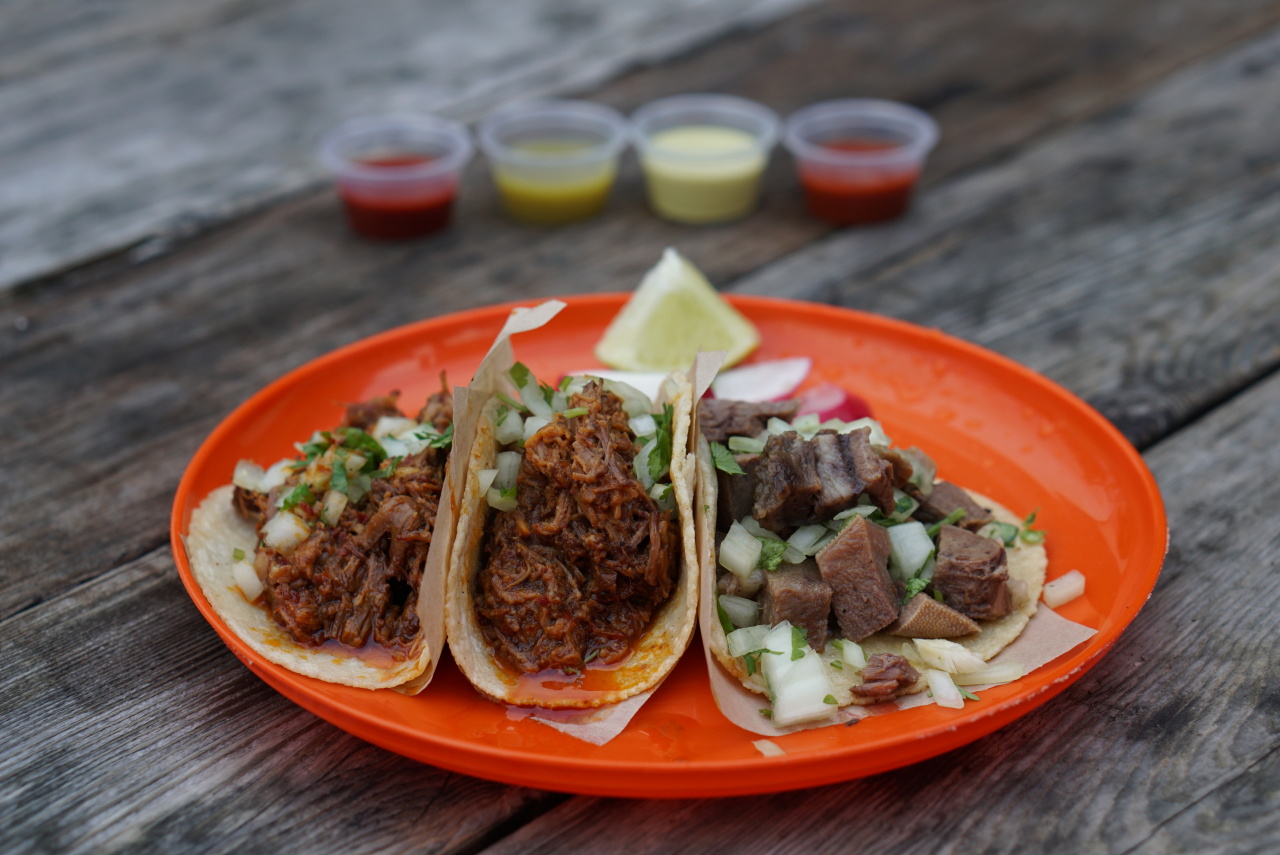 Barbacoa de res seasoned with aromatics and spices and just a hint of chile. Served shredded on handmade tortillas.