They gave everyone baseball hats.

I understand why they gave everyone shirts: uniform color looks imposing and visually attractive on television. But why baseball hats? They carry hair disease. They look funny on most heads. They're not, from a free-clothing point of view, terribly cheap and easy to produce. Think about it: a t-shirt, that's just cloth and thread and ink. But a baseball hat is: 1) sturdier cloth that keeps its shape, 2) a pair of plastic snaps, made in a mold injector that probably cost at least 30,000 dollars, 3) a stiff cardboard covered in thinner cloth than the rest of the hat, 4) a button on top of the hat, made out of metal or string tightly wound around a tiny pebble or something, 5) like a giant pile of embroidering thread, run through an industrial embroidering machine which I am willing to guess cost even more than the plastic snaps mold injector. How complicated!

And the hats looked weird. Look at all these people standing in the tunnel, waiting to leave, all wearing the same bright white ill fitting baseball hat, like some kind of religious cult built around Ted Williams' return to Earth after he is freed from his frozen-head prison. 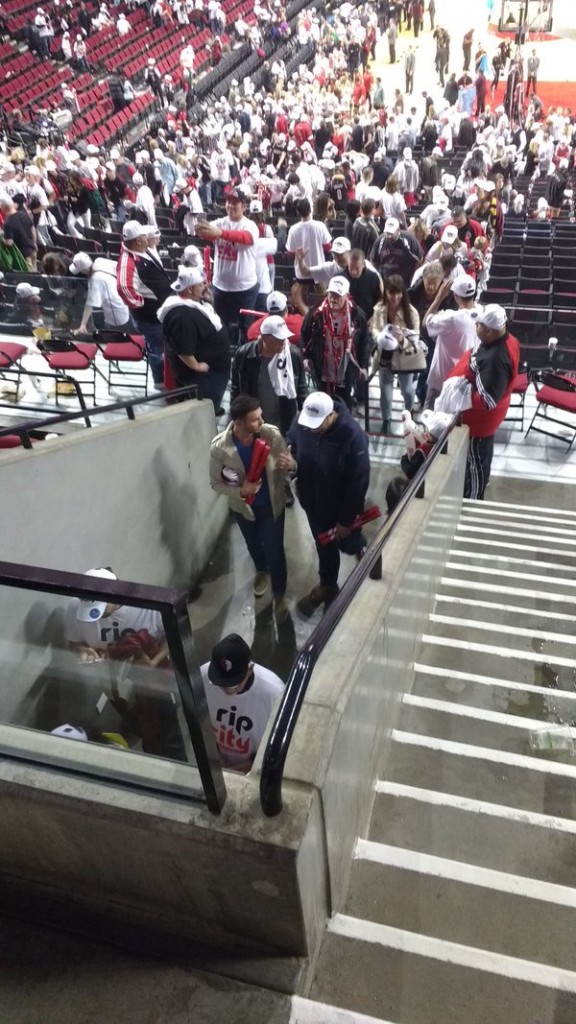 Don't they know it is a massive faux pas to wear a hat indoors? And I understand that Easter has come and passed, but it gets a little rainy in Pacific Northwest and frankly, a hat that white will probably seem gauche until mid-July. Look at how sad Mesh is that he won't be able to utilize his new couture until mid-summer! 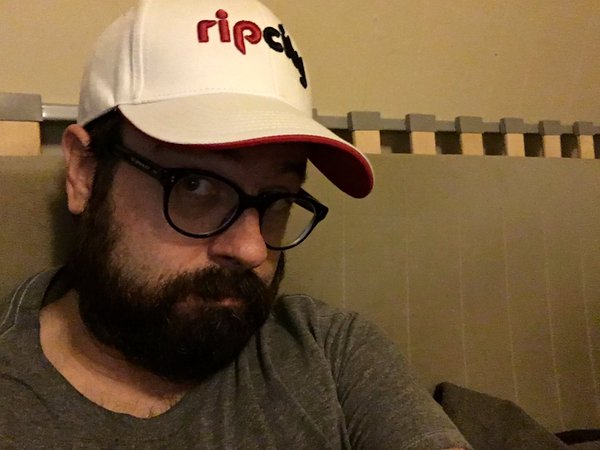 Maybe the Trail Blazers organization just loves "the fans" and wanted them to cop a free baseball hat on their behalf. It has been a hard series so far. But as it turned out, the organization's generosity was completely unnecessary because the Blazers won an exciting game!

How did they do it? How does anyone do anything: Defense! The Blazers, especially Moe Harkless, who was a pure celebration of love on Saturday, took it to their Los Angeles counterparts on the perimeter. The Clippers went a stinky 3-18 from three and watched their guards (Chris Paul and Jamal Crawford, especially) get run off the line and into benign two-point range, where they were forced into late-clock takes that melted off the rim. CP3 loves, not always ideally, to massage a halfcourt game, and he was really slowing it down tonight and letting the Blazers set their defense. On an intuitive level, this is good strategy. The Blazers are younger, have good transition players and are more likely to benefit if the game gets fluid. But tonight, it backfired.

Every team should be allowed to play a series against Chris Paul, man. He is such a fabulously cantankerous gamer who isn't above shows of petulance or pissy techs or dirty-seeming defensive pays. Most great players say the want to win, but Paul is so thoroughly devoted to purging himself of honor or vanity or pretense or anything that isn't single minded devotion to winning or leveraging every stinking play he can get his hands around.

He was subjected to a flagrant review in the fourth for fouling CJ in transition, in the air, that was somehow simultaneously dirty as shit and also totally legal at the same time. It was a masterpiece of corrupt, Saul Goodman-ass defense. He even put a little shove in Plumlee's side after he lit them up all night. If only all the forces that oppose us in our lives were so perfectly noxious and dissectable as Chris Paul!

Mason Plumlee was excellent, netting 21 boards and 9 assists. Plumlee's playmaking was a big surprise this year, enabled by Terry Stott's motion philosophy and some really nifty sets that turn a roll man in the paint into a distribution hub to the corners. They also run them with Ed Davis from time to time, but Plumlee really is much better at it. Harkless risked getting dunked on in a severely dramatic fashion to foul DeAndre at the rim. His bravery is commended in this space.

McCollum was good. He put a vice grip on Austin Rivers at the beginning of the second, leaving him all reaching and fouling and incredulously throwing his hands in the air. The Blazers have done a poor job containing the Clippers' sorta garbage bench all series, but that particular second quarter bench unit showdown was worth about plus-10 points to the Blazers, the difference in the game. If they're going to push this thing to the edge, those bench duels are going to have to go their way pretty much every time. Doc's insistence on shoving that terrible unit out there is the only decisive advantage they have in the series.

There was a little hackwork done on Jordan. It worked. I don't normally advocate for this kind of tomfoolery for both aesthetic and points-per-possession reasons, but it worked like a charm here. Plumlee even managed to get the rare inside-two-minutes hack when Jordan got the ball above the three-point line. Lots of glorious accomplishments on his shoulder tonight.

A night of victories small and large. We can only pray that tonight's result is similarly glorious.

Corbin Smith is a writer from Vancouver, Washington. His work appears in VICE Sports, The Classical, and shopping lists scrawled onto his own arm. Extremely handsome.