A Guide to Portland Record Stores

In Portland, every day is Record Store Day. This is a guide to all of them.

With its clean, minimalist design, Beacon Sound has the air of an art gallery, which might also owe to the fact that it's connected to one. Either way, it belies the shop's focus, which, while stocking the usual of-the-moment indie stuff, tilts avant-garde. On a recent visit, customers milled around the counter discussing Steve Reich and John Cage while crazy-making free jazz spilled from the store speakers. No one will judge you for only buying the new Sufjan, though. Not out loud, anyway. MATTHEW P. SINGER.

Rightly regarded as one of the truly special record stores on the West Coast, if not the entire country, Mississippi Records piles all manner of curios—mostly of the blues, gospel and folk varieties, a good chunk of which were reissued via owner Eric Isaacson's label of the same name—into a room resembling the den of that eccentric hermit at the end of the street you've been dying to become friends with. MPS.

The pun probably worked better back when buying records seemed like grave-robbing, but even after the medium's resurrection, Vinyl Resting Place, long one of St. Johns' best-kept secrets, keeps a mostly vintage inventory. You won't find any Best New Music selections, or much new anything, but there is a ton of reasonably priced old folk and country, plus a world-class jazz section allegedly frequented by Japanese collectors. MPS.

Find Of The Day: Presenting The Fabulous Ronettes Featuring Veronica, which sits behind glass with a $200 price tag.

Hidden in a narrow alley just off Sandy, Anthem Records is a small specialty store owned and operated by Jon AD, founder of the electronic music label Lo Dubs. But don't expect to see anything as commercial as, say, the new Disclosure record sitting in the bins of vinyl stacked throughout the sparsely decorated shop. Instead, you'll find a limited-edition orchestral metal album detailing the battle between Gandalf and the Balrog, a few fleetingly popular 3-inch CDs tacked onto a wall or selections of a genre called "Gabber." KAITIE TODD.

Jump Jump Music is one of the oldest record joints in Portland, with an emphasis on hip-hop, soul and jazz. While the store looks like something out of Hoarders, cluttered with boxes and dusty memorabilia, the records are intensely organized and the owner knows his stuff. ASHLEY JOCZ.

is a hidden gem in the Alberta neighborhood. While the store doesn't boast much square footage, it's got an extensive and in-depth collection of classics, hits, rarities and old Southern gospel. Displaying such records as Mississippi Delta Blues, Vol. 1 and the Endless Summer soundtrack, the store caters to every level of record geek. There's an extensive cassette collection as well. AJ.

*Note: This listing was written about the store's previous location on NE Alberta. Little Axe is moving to 4142 NE Sandy Blvd. on April 30, 2016.

With Little Axe having moved out of the 'hood, Musique Plastique is somehow Alberta's only record shop. Resembling a walk-in closet with a cash register, the tiny boutique feels less like a store than a museum exhibit of a vinyl junkie's precisely curated, neatly arranged personal collection; it almost seems like touching anything should be consider a violation. But while the atmosphere is certainly geeky, it's hardly stuffy or uninviting: In such close quarters, it won't be long before you find yourself nerding out with one of the co-owners over the rare, all-German-language versions of Kraftwerk albums or the brilliance of Manuel Gottsching's 1984 electro-prog opus E2-E4. MATTHEW SINGER.

Find of the day: A dub version of Israel Vibration's The Same Song, available for $400.

Turn! Turn! Turn! is the "renaissance man" of record stores. Not only does it have some of the best country vinyl in town, but it's also a bookstore, a venue, a bar (with a killer craft beer menu), and even has a small vintage clothing selection—basically, everything awesome in one place. AJ. 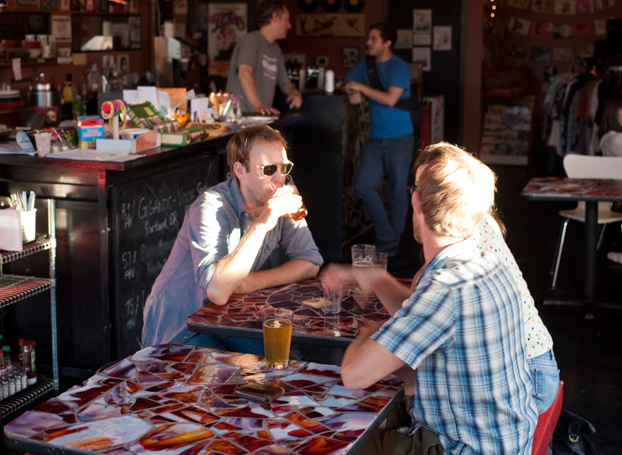 Part vintage stereo equipment shop, part college-rock boutique, the tiny Clinton Street is a geek-focused shop for collectors and connoisseurs. They can set you up with a turntable (most run about $100) and a $50 copy of Mercury Rev's Yerself Is Steam and even a $60 set of used Polk Audio bookshelf speakers. MARTIN CIZMAR.

A flea market of a record store, Crossroads offers collections from more than 30 individuals on consignment. With so much used vinyl spanning most genres, some digging is required, but the friendly staff will help you find treasure. The shop also sells stereo equipment and boasts an impressive collection of local concert posters. MARK A. STOCK.

Find of the day: Roky Erickson's The Psychedelic Banjoman, a European release of songs recorded by the 13th Floor Elevators mastermind between 1976 and 1985.

A petite but lauded shop known for its collection of rarities, bargain bins, international releases and zines. Sharing a complex with a liquor store and sandwich shop, Exiled feels like an industry secret, a delightful marriage of new and old records with helpful handwritten tags and placers devoted to acts as unsung as Brian Cook. MAS.

Find of the day: Testify, a 1971 release from local pro wrestler Beauregarde featuring a 17-year-old Greg Sage on guitar.

Between the anime-style vinyl figurines, the weirdly stylish kitsch and handmade skateboards on the walls ($69, unique!), you almost could be in the world's best store for designer kicks. But the weird, low-ceilinged shack by the Burnside Plaid Pantry is all about the kick drums, snares and breaks, at that intersection of geek, toker and cool-kid DJ that describes maybe 30 percent of Portland. MATTHEW KORFHAGE.

Find of the day: The guy behind the counter was stoked on the new Sven Atterton, a hacked-up wallpaper of Minneapolis-style synth funk. I was sort of excited about a limited-edition Strawberry Shortcake platter for $8. 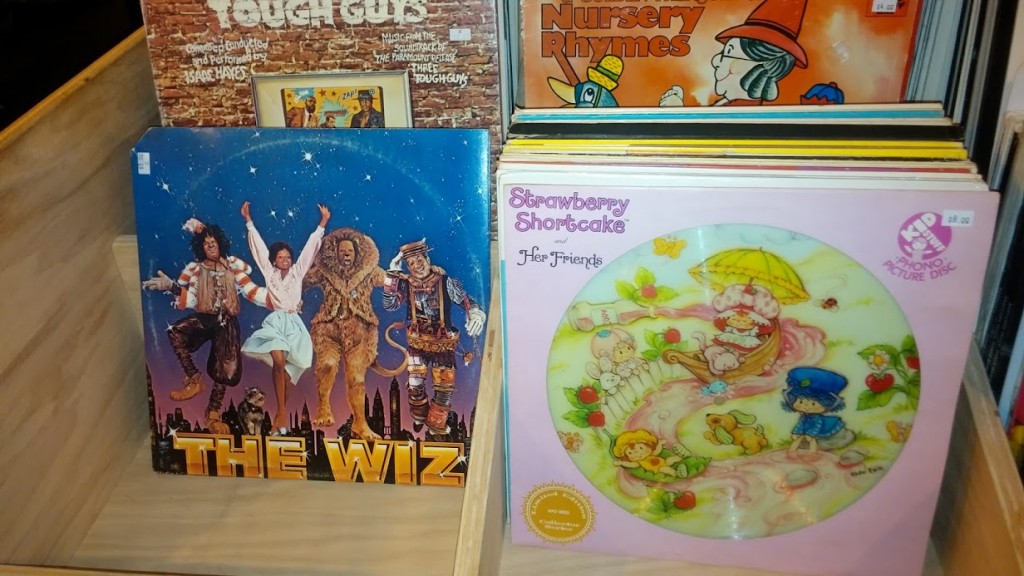 The former location of this shop, which doubles as home base for local garage-rock label Dirtnap Records, got gentrified out of its Woodstock space because of a fancy sandwich shop. Now, it's out on a scrubby stretch of Foster. The selection is large, and the entrance is well-stocked with punk zines. MC.

Find of the day: Pretty much everything Mean Jeans has recorded on vinyl.

Jackpot's original Hawthorne location (the larger downtown store closed last year) is as small and charming as an ice-cream parlor. Vintage signs dangle above tidy stacks of mostly contemporary CDs and vinyl. The shop opened in 1997 and has since coined a record label, reissuing work from the likes of Portland punk-rock pioneers the Wipers and Dutch garage experimentalists the Outsiders. MAS.

Find of the day: Grock by Crock, a frenetic prog-rock project from Quasi's Sam Coomes and Hella's Spencer Seim, of which only 500 neon-green vinyl copies were pressed.

At 56 years old, the labyrinthine nooks and crevices in Portland's oldest and most storied record store look as if they evolved naturally, like canyons carved into sandstone. They didn't. The store is in heavy rearrangement, with an extra vinyl room in the works because one wall of the current vinyl room will soon have a bar and cafe serving up libations for shoppers and the lookie-loos at Portland's busiest in-store show venue. MK.

Find of the day: A first pressing of Led Zeppelin I with turquoise lettering recently sold for $1,000.

"Empire" is right: Since Jared and Brianne Mees launched their label and original boutique store way back in 2006, Tender Loving Empire now has three locations and a discography representing the cream of Portland's indie-pop crop, from Typhoon to Radiation City. Although its Hawthorne location, which opened in 2014, is more gift shop than record store, the music it does sell is the most Portland-focused in the city, from the TLE catalog and beyond. MATTHEW SINGER.

Find of the day: A series of PDX Pop Now compilations on CD, going as far back as 2007.

A downtown mainstay for more than three decades, 2nd Avenue's impeccably curated embarrassment of vinyl riches caters to just about every taste imaginable. Aging scenesters eye "Cowboy Classics" 78s stacked below the yawning reggae selection. Tattooed tweeners leaf through hardcore 45s probably recorded before they were born. A hyper-disciplined organization of goods dispels any whiff of the flea market and, with enough artist tees hanging from the rafters to fill a dozen Hot Topics, even the music haters among us should leave happy. JAY HORTON.

Specialization: No one in town carries more metal.

Among the vinyl-adorned pillars and magazine-clipping-collaged electrical boxes of Everyday Music's library-style layout—a décor my companion deemed "industrial-meets-dollar store"—you'll find what is likely the largest collection of vinyl in the city. If you uncover a used $2 Stevie Wonder record after staring at the spidery wall decals from an old Of Montreal album, it shouldn't be a surprise. KT.

Specialization: If you need the new Death Cab or Decemberists, they got you. 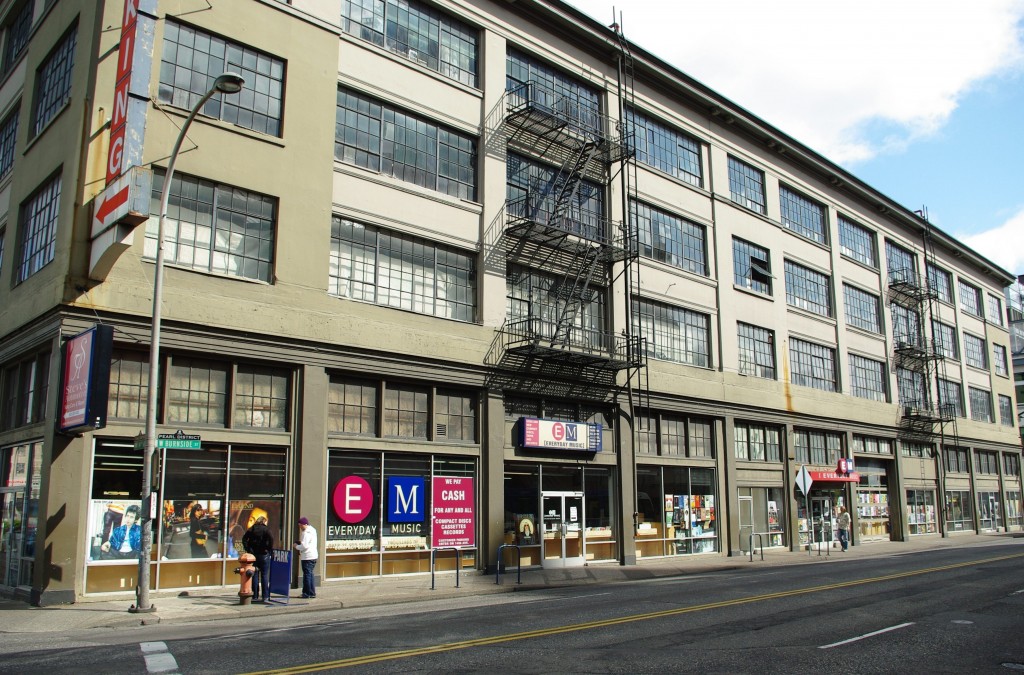 Although the larger back room of DJ gear and PA systems may now attract the lion's share of business, Platinum Records still boasts a daunting supply of '70s funk, '80s R&B and block-rocking white labels. Give prospective purchases a spin at listening stations set up below signed testimonials from DJ Dan and Mix Master Mike. JH.

Housed within Old Town's Floating World Comics, this teensy record store might appear to be just an outgrowth of four-color wares. But Landfill's separately owned and operated area—soon to have a designated sales associate three to five days a week (and weekends)—catches the eye through graffiti-scrawled, specially constructed wooden dumpsters whose hidden shelves roll outward to reveal vinyl treasures. JH.