"So, you think you're fucking ready for this?!" bellowed Slayer singer-bassist Tom Araya, as he prepared to join founding guitarist Kerry King, along with returning drummer Paul Bostaph and recent addition Gary Holt on guitar in a pummeling and merciless rendition of opening song "God Send Death."

It was just the start of an incendiary collection of hits the band unleashed on Roseland Theater last night. Backed by strong support from the U.K.'s Carcass and California's Testament, the sold-out show was a relentless tour-de-force of old-school thrash-and-death mastery.

But with a strict no-mosh rule in effect and a reserved-seating situation in the balcony, the vibe in the venue was far less confrontational than one might imagine. There was not a single striped-shirt squarebeard in the packed-to-capacity house looking to see and be seen, nor any willing troublemakers just looking for a harsh circle pit in which to crack some skulls. Testament's Chuck Billy didn't get this memo, as he spent the last few songs of the band's engaging and explosive set reminiscing about the brutal pits of the past and passionately imploring the assembled crowd to create a scene that would equal the danger and challenge of the old days. Fortunately, it didn't take, which is (ahem) a testament to both the Roseland's increased ability to control such situations and the fact that, like the bands themselves, we are all getting older.

As further proof of that last part, there were more than a couple thrash dads with teenage kids in brand-new, freshly donned Slayer tour shirts getting their first lessons in the legacies of brutality that had forged their parents. "Your pretty little faces make me so high and happy," exclaimed Carcass' Jeff Walker, leading into a flawless performance of the title track from 1993's seminal Heartwork. Bathed in clinical white light, as mounted video screens displayed footage of 19th-century surgical techniques, Walker was all smiles, tossing out picks in the split-second gaps between his ballistic death-grind assault riffs.

Of course, while no one escapes the passage of time, aging doesn't matter as long as you can still crush. And crush Slayer did. And crush Slayer did. The set featured songs from the band's most recent album, Repentless, interspersed among selections spanning their entire catalog, and the 30-year old material sounded just as fresh and vital. Despite a 50 percent turnover in membership in the last few years, Slayer are no less potent for the change. Clad in a T-shirt that simply read "KILL THE KARDASHIANS," Holt was in top form, effortlessly channelling the fury of the late Jeff Hanneman and paying due tribute with his predecessor's custom faux-Heineken decal adorning his guitar. Bostaph pummeled his kit with possessed fervor, balancing his relentless, freight-train, double-kick hammering with the technical mastery of three decades of experience. "Experience" was one of the night's keywords, where all three technically flawless sets (barring a synchronization snafu during Testament's opening song) contributed to the air of serious professionalism.

Some dude in the crowd yells "Fucking Slayer!" and Araya grinned a little, quickly widening into a beaming smile as he took a moment between songs to simply look around the room at the crowd assembled before him. A kid up in the balcony unfurled a large banner depicting the classic pentagram-of-swords logo, and then stood up to reveal his matching Slayer hockey jersey. The one dude in a black shirt who had been crowd surfing all night with both fists pumping in time to every song had managed to stay floating above the crowd even while there was no music being performed.

Once the final bludgeoning chords of "Angel of Death" had ceased, and Araya stuck around to have a few short words of thanks, the only thing left to do was to soak up the sheer energy, the joie de vivre of being a true believer among true believers, sharing the satisfied smiles of fellow united thrash enthusiasts as we all picked our way through piles of late-night, SpaghettiO's-and-vodka puke back to our cars. If this is how hell awaits, I will see you there. MIKE GALLUCCI.

All photos by Colin McLaughlin. 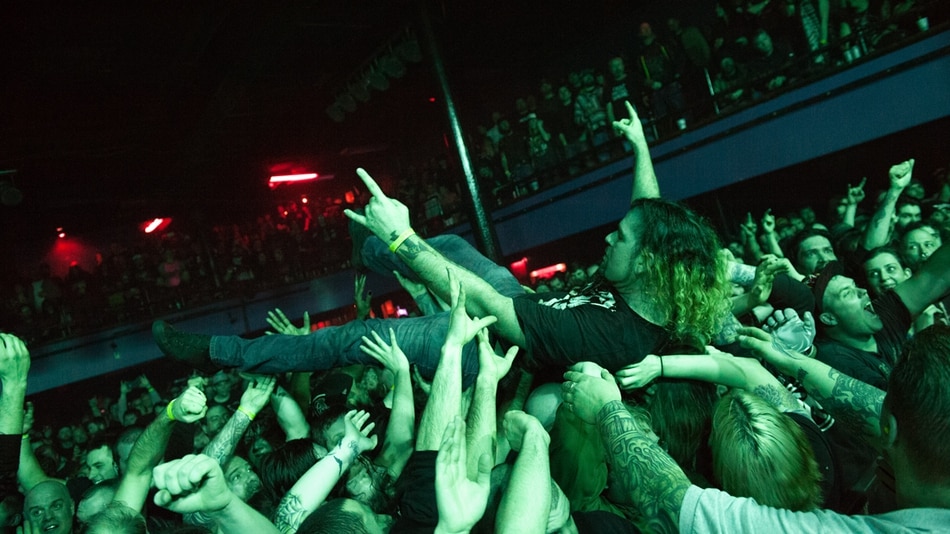 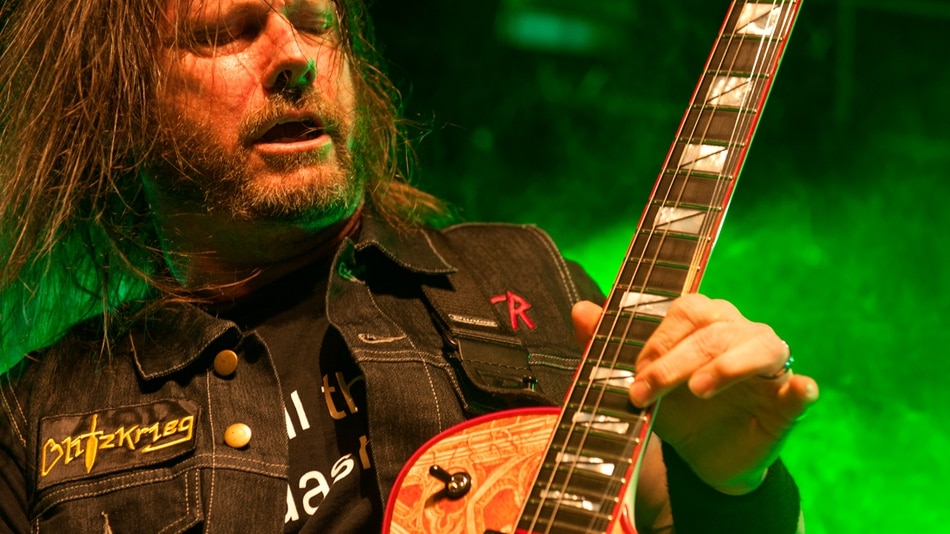 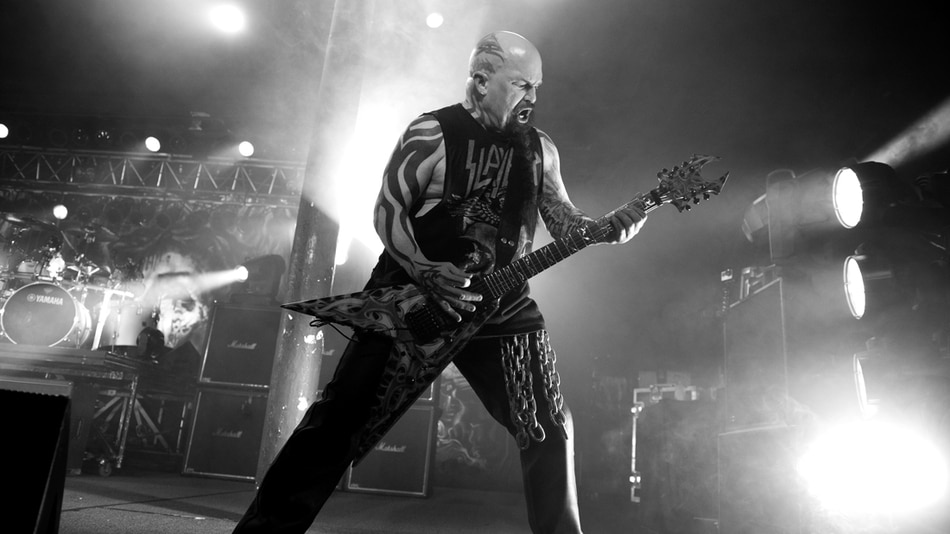 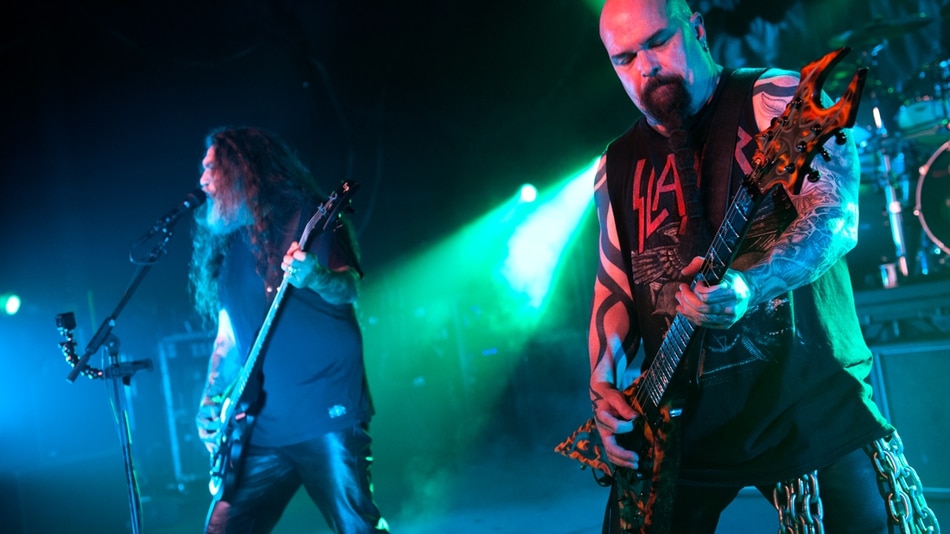 Slayer at Roseland Theater on March 20. IMAGE: Colin McLaughlin.
7 of 19 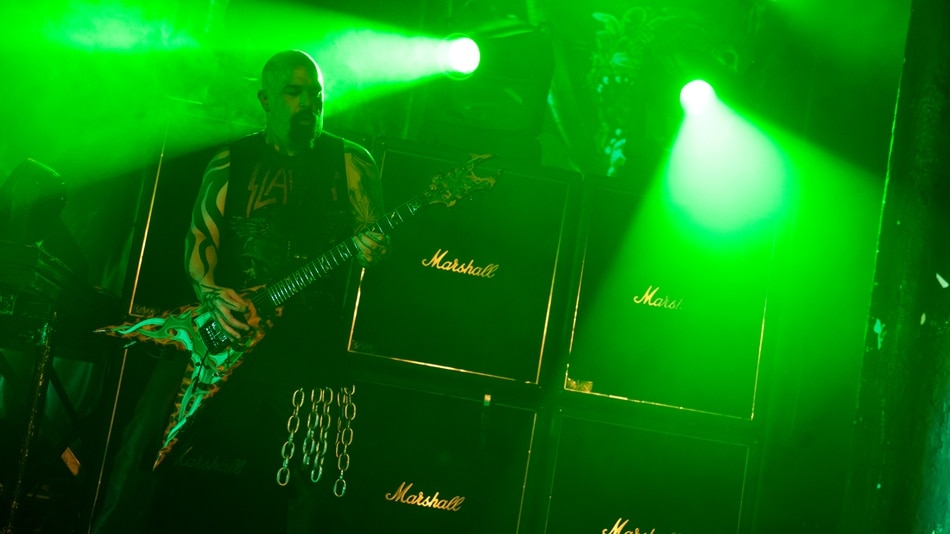 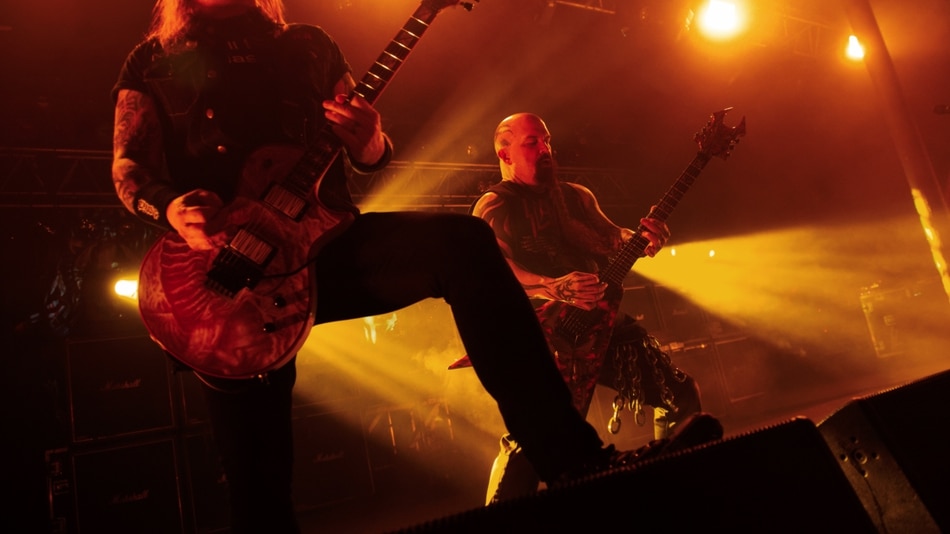 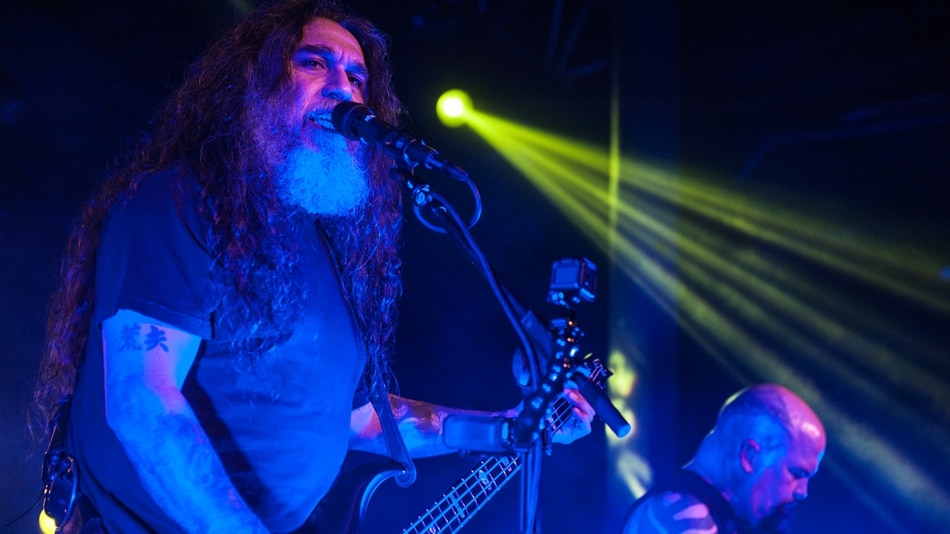 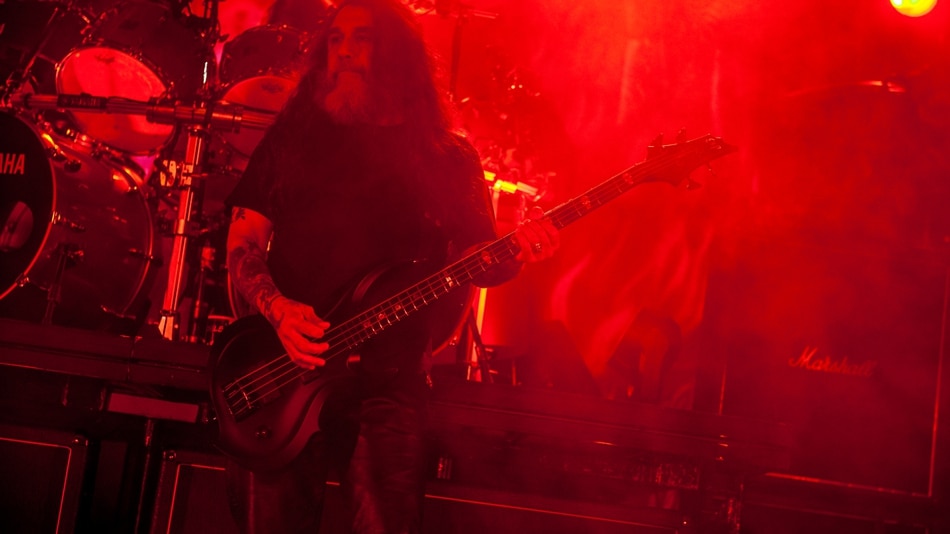 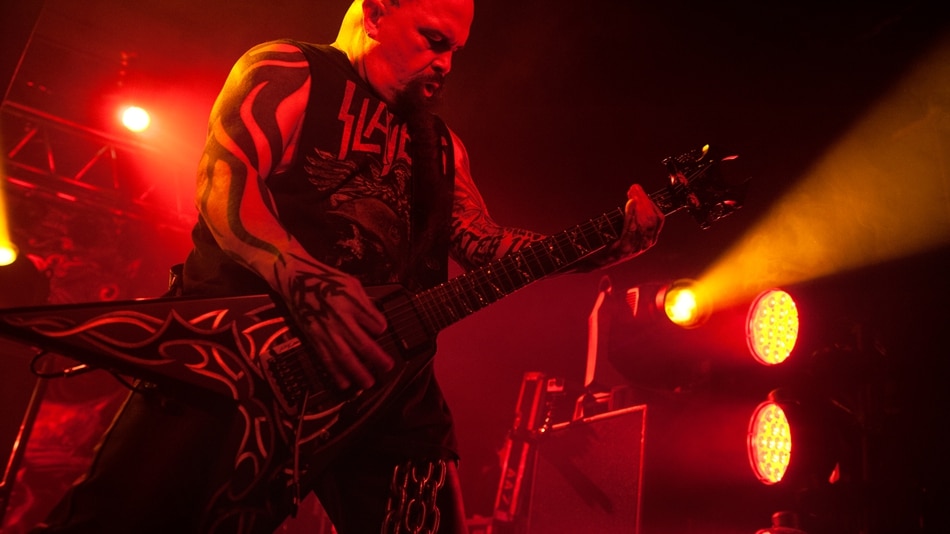 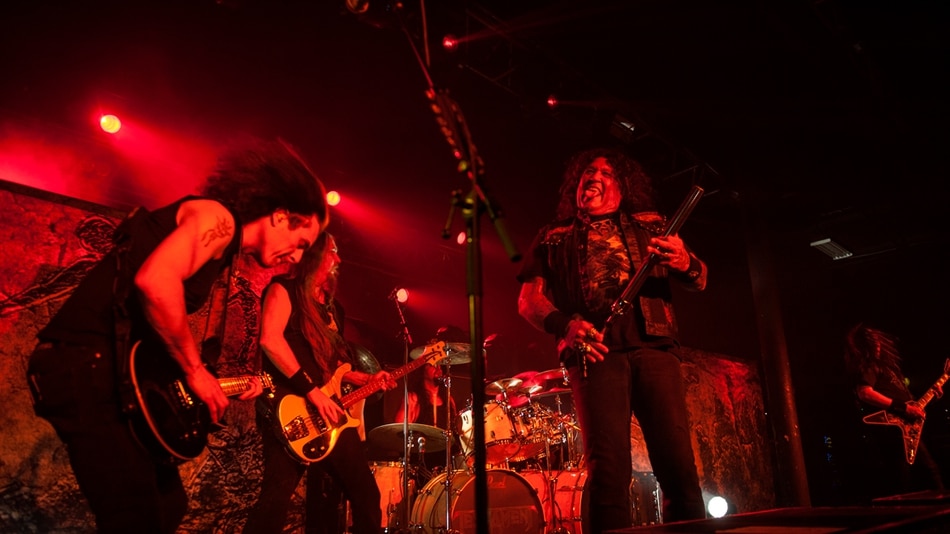 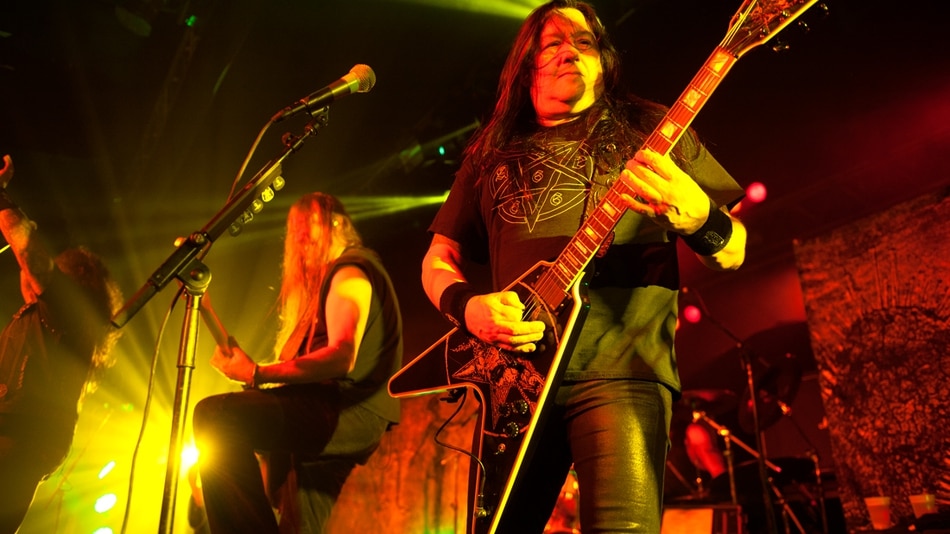 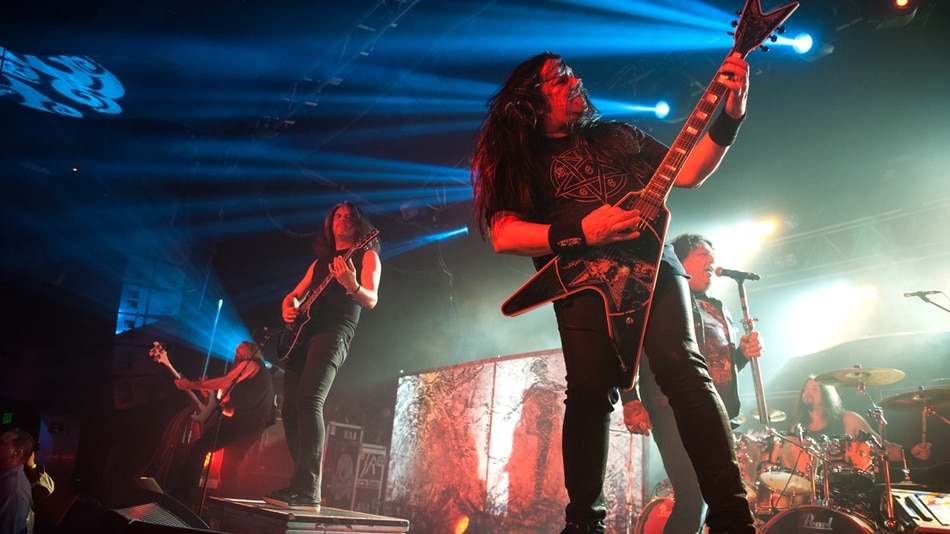 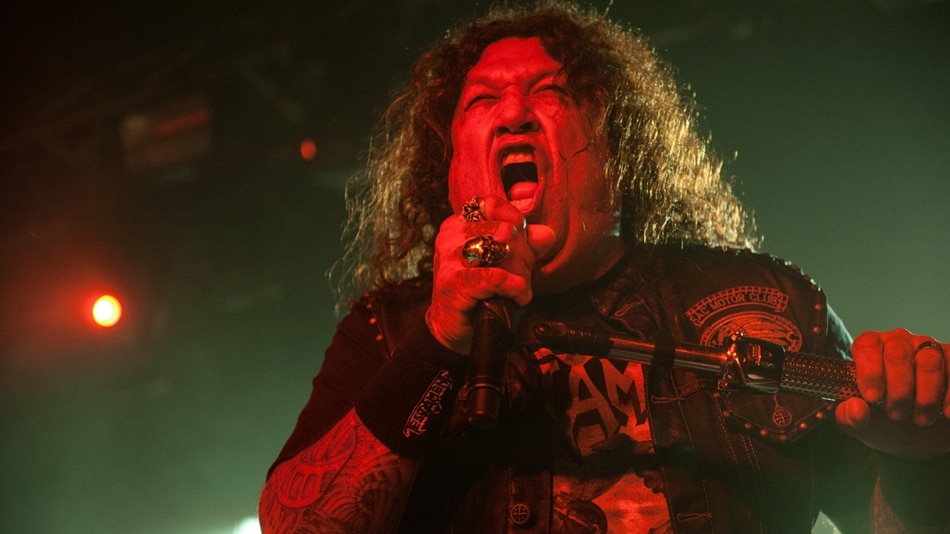 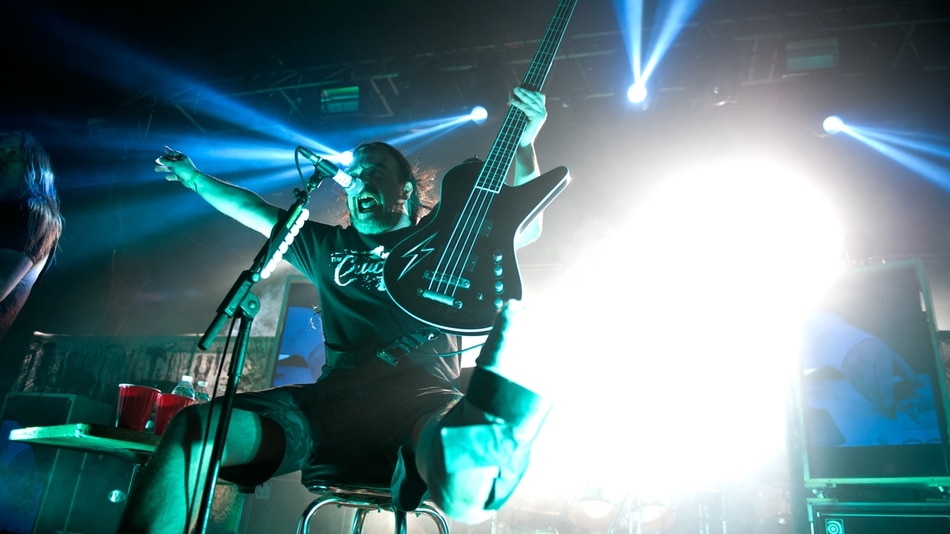