The Best Five New Ciders Made in Oregon This Year

We tasted more than a hundred new ciders made in Oregon over the past year. These are the best.

In honor of Oregon Cider Week, which closes out this weekend, we tried more than a hundred ciders released in Oregon this year—culminating in an epic tasting of over 30 contenders with a panel of seven tasters this June. These are our five favorite new ciders in Oregon. 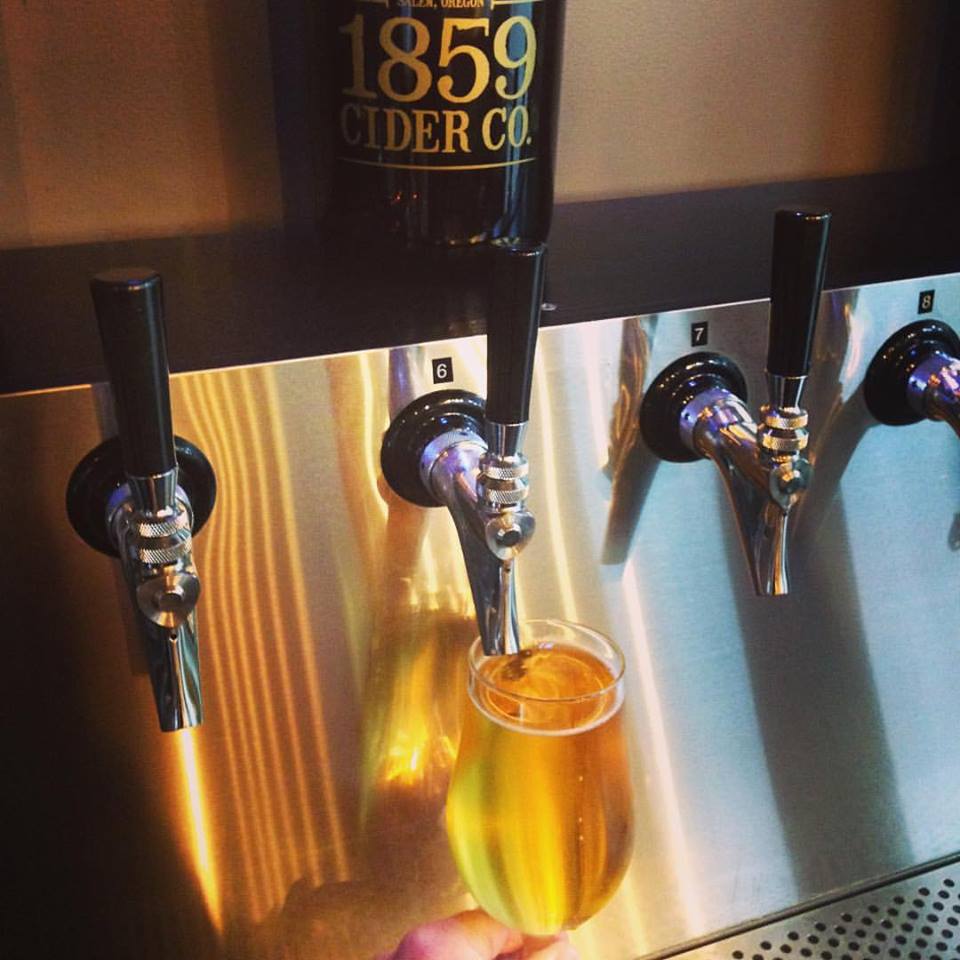 Out of a little back-alley cidery that doesn’t even have a sign, Salem’s 1859 is making cider like no one else in Oregon.

Hunter's Moon, our 2017 Cider of the Year, is like a vintaged red wine made of cider fruit. And though it's made from only a single varietal of tart heirloom winesap apples, from a secret source in Hood River—"I don't even tell my sister!" laughs 1859's co-founder Patricia Fox—the dry cider takes on startling complexity, bursting with apple flavor alongside distinct tastes of apricot, clove, cinnamon and good, old-fashioned funk. It's like down-home Christmas in a glass.

"Cider is wine to us," says Patricia, who started the cidery with her husband Dan in 2016. "It's an expression of the land." The Foxes got wine degrees in 2010 after switching careers from environmental science, and they're putting that to use on wine-like ciders made without added water or sugar.

But the rich complexity of Hunter's Moon comes from a process almost unheard of in American cider: They age it for eight months in eight different tanks, using eight different yeast strains—including three wild ones—and blend the result to get the flavor they want.

Hunter's Moon is also a whopping 8 percent ABV, because the Foxes allow it to undergo secondary conversion like many red wines, moving from tart malic acid to soft lactic acid.

"I like to think of it as a clean scrumpy," says Patricia, referring to the old-time farmhouse style of cider. "It's not just left on your back porch like they used to do. It's more purposeful."

The result was an extraordinary cider—free of sugar but still full of the feeling of sweetness, a controlled wildness with bracing spice and depth that arises only from flavors of fruit and yeast. Their other ciders—from a balanced and apple-y Batch 13 to a peachy Impeachment named for our nation's president—are equally singular.

But don't expect to ever get the same batch twice—and sadly, they've already blown through last year's Hunter's Moon.

"Once it's gone, it's gone forever," Patricia says. "It was wonderful, wasn't it? Now we'll see what the next one's like."

The best new traditional French-style cider we tasted this year was born in Corvallis.

A lush and vibrant blend that's composed of juice pressed from hard-to-find heirloom bittersweet and bittersharp apples, 2 Towns' wild-fermented Cidre Bouché comes across your tongue with a perfect accent of oak tannins and sweetness on the finish. It offers a heady, full-apple bouquet rare in dry cider, with Normandy funk on the finish.

That depth  didn't come easy. The slight sweetness is from a difficult fermentation-stalling technique called keeving, a method 2 Towns employed for its first time ever in this 2015 batch. Information on keeving is so scarce that 10 Northwest cidermakers went to France this year to learn it—including 2 Towns cidermaker Dave Takush. But nearly two years after he began his 15-barrel experiment with keeved cider, Takush tasted the finished product and knew they'd gotten it right. It's not just the finest French-style cider made in Oregon last year, but some of the finest cider made in Oregon—period.

"It felt like, 'Yes, we did it! We made a traditional French-style cider in America,'" says Takush of that first sip. "There's not too many people doing that."

Eden Valley's perry was a long time coming. The pears they used were planted by the father of the southern Oregon pear industry, Joseph Stewart, in 1885, the first commercial pear trees planted in the region. But though Anne Root started a winery on those historic pear orchards all the way back in 1999, Eden Valley's 2017 spring release is the first year Root's daughter, Ashley Campanella, put her winemaking skills to use on all those pear trees to make cider.

Well, holy shit—Eden Valley's is the best perry we've had in the state, in a year when seemingly everybody is trying their hands at a perry. It is startlingly pure and bold, with sweet pear flavor tempered and deepened with yeast notes. This perry is like the distilled essence of pear made lightly boozy, a startling shock of flavor that almost seems to contain the granular sugar-crystal texture of pear meat. It promptly won medals in seemingly every contest it entered, but to get it you'll have to order from Eden Valley's website: They're still on the hunt for a distributor.

Reverend Nat's Spanish-style cider has nothing to do with Spain—and yet, it's the best we've had that wasn't made in Asturias or the Basque country. In 2015, when Toro Bravo's John Gorham asked for a Spanish cider for his new Pollo Bravo restaurant (now under new ownership), cidermaker Nat West didn't try to recreate the traditional techniques used to make famously wild, funky, intense style of cider. He simply didn't have the materials to do the job: the microflora Spaniards have cultivated over hundreds of years.

Instead, he pulled out a secret weapon—ciderkin, a rare and funky cider made by soaking and fermenting pressed apple skins from English and French apples like those used in Cider Riot's Kingston Black and 1763 ciders. "That skin contact time, plus the fact that it wild-ferments, results in these huge flavors for ciderkin," West says. When Gorham tasted it, that crazy Band-Aid funk reminded him of Spain.

But the flavors in that ciderkin are too intense for most, West says. So he mixed it with his apple-y Newtown Pippin to make a quaff with just enough funk and just enough fruit. It's still poured at Pollo Bravo, but you can also just wander down to Nat's taproom north of Northeast Broadway. The bottles, released this May, can be found only there.

Lullaby of London is an ingenious solution to a vexing problem: How do you get the beautiful flavor of gin botanicals into cider without overpowering it?

The answer? Put beer in the middle.

In order to prop up the flavors on a cider they thought was a little boring—a batch of apple juice fermented with Australian wine yeast—the Cider Riot crew threw that cider into three Ransom distillery gin barrels that had also been used to age Gigantic Brewing's Oregon Beer Award-winning Pipewrench IPA. They released the result this year for Belmont Station's month-long anniversary party as Lullaby of London.

The Lullaby is a lullaby of gin flavors that could have been boozy and overpowering. The juniper, coriander and hop in the barrel teamed up to provide the bitter character and spice that balance out the sweetness of the initial dessert-apple fruit juice, but it remains complex and subdued, tempered by the time the barrels spent soaking in beer.


"First these were pinot noir barrels," says Goldman-Armstrong. "Then they had gin in them, and then beer, and then cider. I feel like it's my duty to find a sake maker and pass them along."