You no longer have an excuse for never having seen Citizen Kane.

With Welles' turning a hypothetical 100 this year, Portland's Northwest Film Center is hosting a "primer" of his works, starting with Kane this Saturday. But there are deeper cuts too—the beautiful but ill-fated Othello, and Journey into Fear, in which Welles shows up with a Turkish accent. 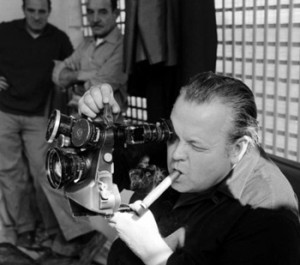 Northwest Film Center Manager Nick Bruno says picking a favorite "is kind of like trying to decide which of your oversized, alcoholic children you love best."

But everyone knows that parents have favorites. After some cajoling, he admitted these are his darlings and wrote a little about each one to help you decide which screenings to attend:

1) Chimes at Midnight aka Falstaff

You'd think Citizen Kane would be tops. But Welles' third adaptation of Shakespeare was the film he often pointed to as his best. The camera darts here, there and everywhere throughout the film, constantly forcing you to question what you just saw. The film's influence is visible in Kubrick's Paths of Glory, Spielberg's Saving Private Ryan, and Van Sant's My Own Private Idaho.

You think you've seen Citizen Kane, and you probably have—on home video or (hopefully not) your smartphone. Here's a little secret: the film is about as close to a holy experience as one can have in a movie theater. Like Eisenstein before him, Welles completely reinvented the visual grammar of movies. Keep in mind as you're watching that Kane was Orson's first feature film.

Ambersons was famously wrested from Welles' control, with Robert Wise (The Sound of Music) taking over, excising up to an hour of footage and shooting new scenes. And yet, the film—though uneven at times—retains a spirit of invention that's only exceeded by Kane.

Welles' reputation as a raconteur was never more obvious. A documentary with an unreliable narrator, the film revels in forgery, including Welles' famous radio adaptation of H.G. Wells' War of the Worlds. Tales of willful deception are anchored (or is it untethered?) by editing rhythms pilfered directly from the French New Wave.

Carol Reed's treatment of Graham Greene's screenplay is probably the best of Welles' for-hire films. Joseph Cotton is ostensibly the lead here, but the dynamic shifts the moment that Welles appears onscreen, more than an hour into the film. In between,the wet streets and sewers of Vienna at night serve as the most dramatic of backdrops, perfect for the iconic chase scene that closes the film.

Welles abandoned all interest in redeemable characters here. Everyone, including the newlyweds played by Charlton Heston and Janet Leigh, is or becomes unlikable. The film's exploration of human corruptibility is at times so grotesque that it's cartoonish. In the hands of a lesser director, the results would be hackneyed, but Welles crafts a carnivalesque nightmare that demands your attention.

Character actor extraordinaire Edward G. Robinson is a Nazi hunter, and Welles is the particular Nazi that he's hunting in this 1946 film noir. The domestic scenes between Welles and co-star Loretta Young are some of the creepiest outside of The Night of the Hunter. And the ending can shake anyone with even a slight fear of heights.

Remember when you were a depressed teenager, obsessed with the music video for Joy Division's "Atmosphere"? Well, you're going to be over the moon when watching the visually dramatic opening of this 1952 take on Shakespeare's Moorish tale. Sporting what is perhaps the most formalist and German Expressionist influenced cinematography of Welles' directorial career, there's probably been no stranger riff on the Bard committed to film.