Coined as Portland's first "urban fashion show," BLOOM RUNWAY sought to bring together creative entrepreneurs of all multicultural backgrounds to celebrate diversity within the fashion community through beauty, style and live music.
Although the first event produced by the Bloom Beauty Collective, led by celebrity hair and makeup artist, Abibat Durosimi, she managed to completely pack the top floor banquet room of the World Trade Center on March 10th.
Traditionally, most fashion shows start with womenswear. But this isn't a traditional runway. Self Made Menswear kicked things off with good looking men in well tailored suits.

Co-hosts Tra’Renee, Emmy Award winning TV personality and local radio DJ, and Art Williams, co-owner of The Influential Grooming Lounge and host of the Barbershop Segment on Rip City, brought us down a lineup including Designs by Thor, along with online boutiques 4Twenty4 and Wavy Boy Clothing, and one brick and mortar, Adorn.

Each designer/brand showed between six-twelve looks and included a range of models from sizes XS-3X. Not only were the models themselves from many ethnic backgrounds, but many of them rocked natural hair styles, such as bantu knots, braids and curly fros. #YAS

Age diversity was also present on the runway, with Wavy Boy Clothing incorporating an eleven-year old boy, and Adorn's fabulous model with grey-hair.
The few logistical hiccups did not affect the caliber of the production. From the impressive location, to the cohesiveness of each collection on the runway, to the massive turn out, BLOOM RUNWAY certainly made a name for itself, and I, like many others who crave more diversity in the Portland fashion scene, are excited to see more. 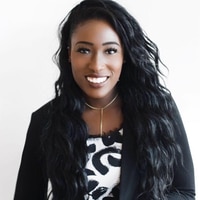