Hobo Pirates of the North Willamette

The morning sun slips through gaps in the patchwork drapes of the captain's quarters, landing an unwelcome blow on Finger's sleeping face.

The hungover pirate rises from his untidy bed, grabbing a can of PBR as he walks past his drum set in the pilot's cabin.

Finger hops from his boat onto his makeshift, free-floating dock near Tom McCall Waterfront Park. Five anchors hold his dock in place, leaving it just loose enough to give it a perpetual sway. Two Jolly Rogers face the shore, fluttering in the gentle wind. One is a traditional skull and cross bones, the other a hand flipping the bird.

Crumpled beer cans litter his ship's deck. Greasy pots and pans sit on the grill. A beat up blue dinghy is tied to a skateboard plank at the aft end. It's the only way on and off the deck (for now).

Looking at the chromatic collection of cheap beer cans in his tip bucket, Finger spits and bellows a hearty laugh.

"It was a group effort messing up this dock," he says, wiping a dreadlock from his tanned, leathery face. "I'm cleanin' up shit until the others help out."

He pops open his PBR. Time for his morning "coffee." 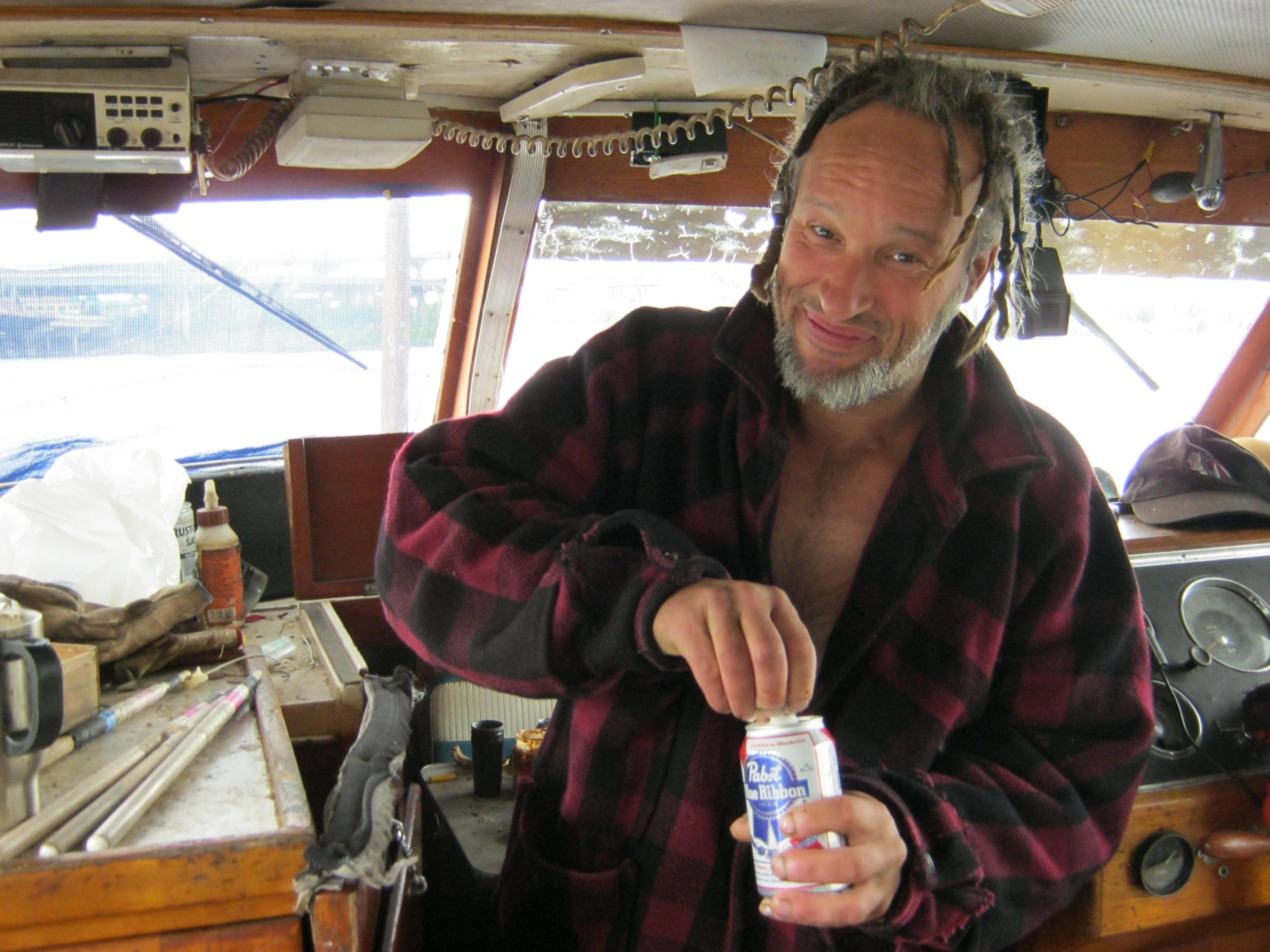 Finger has been living as a "Partial Pirate" on the river for three years now. Three winters, to be precise. That's how Finger and his ilk measure time out here, as the brutal cold tests the mettle of even the scurviest of sea dogs. Some load up on propane tanks for heating, some just bundle up under a mountain of flannel and blankets. It's a rough season regardless for the 10 or so Partial Pirates who live on the Willamette.

But it's summer now. The sun is out, flocks of Canada geese and their goslings are covering the waterfront parks with a healthy layer of shit, and Bluesfest is on the horizon.

Finger and his tribe move from place to place throughout the year. Sometimes by their own choice, others when the river patrol tells them they've been in one spot too long. But they come back to this spot to make port every July. The festival along the waterfront caters to maritime music fans. The public docks at the nearby marina even allow people to be tied up for a free week.

Finger and fellow Partial Pirate Chris are not tied up at the marina. Finger's boat wouldn't fit—not that he wanted to anyway.

"We got the best fucking seats in the house," Finger says.

His floating docks are equidistant between the two stages opening on Independence Day. Not too far from shore, either.

More Partial Pirates are on the way. Finger recently helped procure a sailboat for a friend in St. Helens who should be down shortly. A few are already tied up at the marina. All part of the big plans for the festival.

The wooden planks and large blocks of styrofoam on Finger's dock are the beginnings of a large raft. Modeled after old illustrations from Huckleberry Finn, it's going to be used to ferry larger crowds over to the pirate deck. The Huck Finn Raft is going to transform the waterfront festival into a party on the water—at least that's the hope.

A stripper pole is on the way for Bluesfest as well.

But living in a boat on the river is not an endless party. Keeping his boat in working condition is a full-time job for Chris, who says he'll soon go to Portland Community College to study manufacturing. The nearest public pumpout is broken and locked up, though the Partial Pirates feel this is a passive-aggressive gesture to get them to leave, forcing Chris and the others to carry barrels of their shit to portable toilets and other places to dispose of it.

"I just paddle over to shore and sprint over to Starbucks or something," Finger says. "This isn't going to get in the way o' Bluesfest."

After the festival's over, the pirate will return to his normal life, or as close to normal as that gets: repairing motors, drumming, drinking, and anchoring wherever he pleases. He makes between $30 and $50 a night playing his djembe outside Voodoo Doughnut on the weekends.

"My van was towed while I was sleeping in it," Finger says. "I got that thing paid off, got in this boat, and never looked back. I can do what I want out here."

The Partial Pirate tosses aside his empty beer can, picks up a coffee mug, adds in some coffee powder, and jumps in his little blue dinghy. Free hot water can be found ashore.

"Time for my real coffee," says Finger as he paddles over to the waterfront. 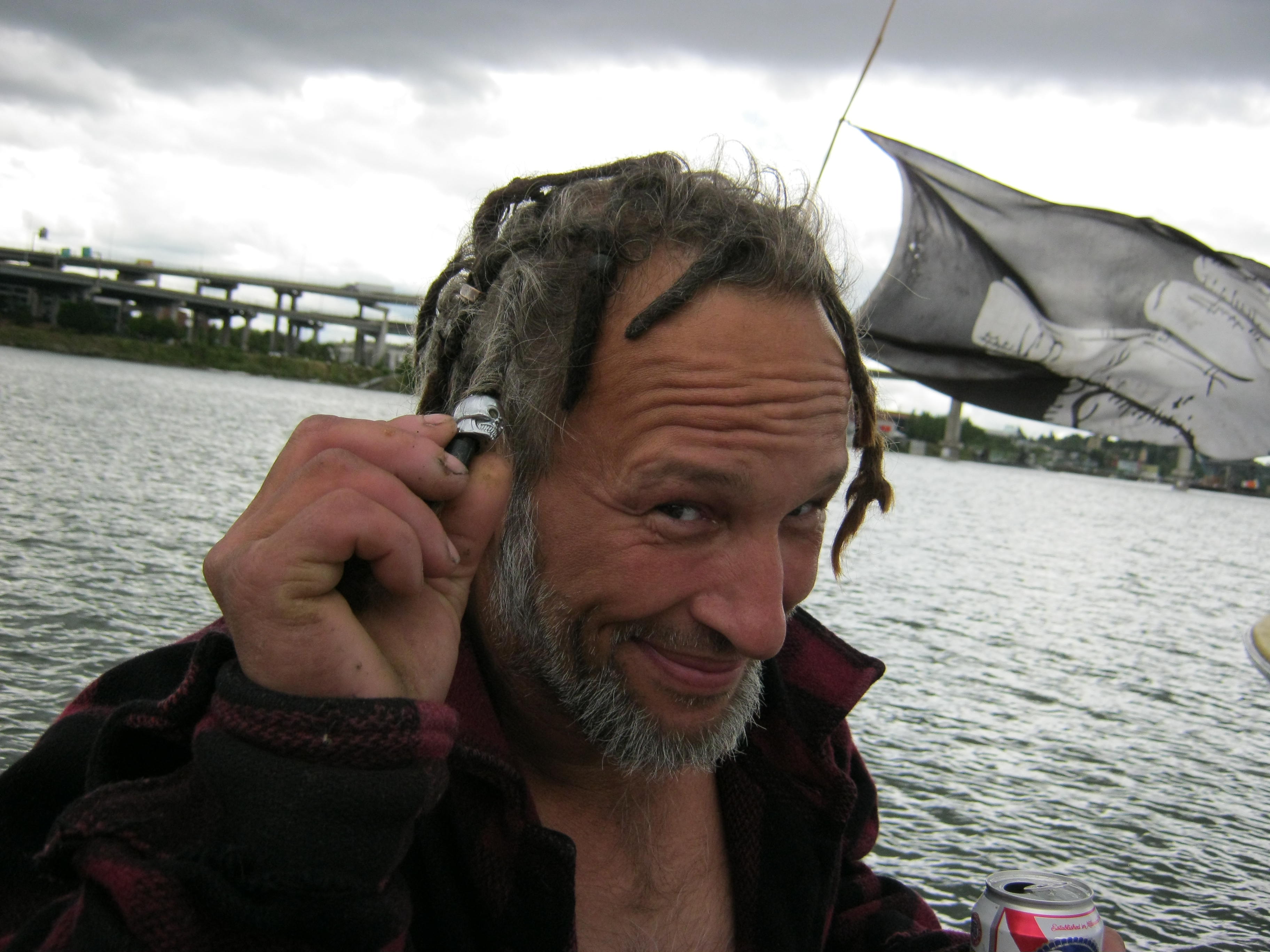