I didn't know where I was going. All I knew was that I was leaving.

It was December 2006, and my roommate had abruptly relapsed. I sat in the corner of our apartment on Southeast Hawthorne, watching him cut a crunchy mass into little lines and draw them into his nose, eyes closed. As his friend watched me sip my drink, he grinned deviously. Within minutes, I knew why. I've never used, but I knew what it felt like to be drugged.

A sense of paranoia fell over me. So I left.

I crossed the Ross Island Bridge, leaning against the gale of an early December windstorm until I made it into the center of town. Slipping into the seat of a nearly empty No. 12 TriMet bus, I whimpered and sniffled. Maybe I'd sleep on the bus?

Instead, I exited just across the Banfield Expressway and quietly walked into the only place I could think of as an accommodation: Steam PDX.

Looking at it from the outside, you'd probably never guess this black box on Northeast Sandy Boulevard was one of the last of Portland's gay bathhouses.

Homelessness wasn't new to me, either. Befitting a 20-something queer Native American from a down-and-out family, I'd been rootless for a while at that point. I had escaped domestic violence in Texas, after my father attempted to kill me with a gun that mercifully malfunctioned. I tried living in Michigan and Omaha, Neb., but both times found myself needing to escape, for different reasons.

When I got to Portland, friends took me in, but the precariousness of the situation and my recent traumas made it difficult to cope. When it came time to leave, I moved onto a bench on Southeast Yamhill Street until I could sleep on an acquaintance's floor. When he caught crabs, I went back to the bench.

That's around when I moved into that apartment in late October. Two months later, I found myself out on the street again. And so I went back to Steam.

Seeking refuge in a bathhouse is not as rare as it seems. Yes, their primary function is for anonymous sex. But given the epidemic of homelessness among LGBTQ youth, bathhouses often double as safe houses. The rooms are cheap and guaranteed to be warm, and if all you want to do is sleep behind a locked door for a few hours, that is an option.

The night crew checked me in. The interior of Steam is a maze of austere rooms, showers, saunas and tubs. In the far corner of the lower floor, there's an enormous steam room and, in another corner, a video lounge. Upstairs is a large sun deck. As I made my way to my room, I could hear echoes of trance music and moans. Some rooms are paired with others, and instead of a full-sized bed, they have queens with a glory hole connecting them to an adjacent room.

Mine, though, was small and private, with a soft bed fitted with plastic sheeting.

Even with a high-grade stimulant coursing through my veins, I slept on my first night there until five minutes before my eight-hour rental ran out. My alarm was the monosyllabic grunting of a man getting fisted.

I dressed quickly and hurried out the door to my office job in Beaverton. I trundled in carrying a large bag of my belongings, which I quietly stashed under my desk.

I remember that day vividly, not just because it came after one of the worst nights of my life, but because of the interactions with my co-workers. One came in, frowning.

"I had to push my flight to Paris back one day," she sighed. "Otherwise, I'd have to stay in a suburb for a night."

As I sat there, I began crying to myself, feeling isolated by how different from me everyone else was—straight white people with straight white problems.

As I left that day, that same co-worker approached me.

"What is all that?!" she exclaimed, pointing at my bag.

I got on the MAX and headed back to Steam. I had to get away from all that. A few stops before Hollywood Transit Center, a familiar face got on. It was one of the night crew from Steam.

"You could say that," I replied.

He nodded with a knowing smile.

I ended up staying at Steam for 17 days, all of which blurred together—wake up, head to work, eat dinner, then back again. I would often rent a locker before getting a room, relaxing and chatting with regulars. You get to know them after a while, even if only by attributes or nicknames—"Big Dick Guy," "the Businessman"—though weariness pulled me to sleep more often than my libido dragged me into someone else's bed. It became a place where the pressure and pain of the outside world seemed to melt off my back whenever I stepped inside. It truly became a home.

Christmas came, and once again I left my room with my life in tow. I spent the day on the phone with my grandma, finally explaining at the end of the call that she'd have to write down another new address. How long would I be at this one? Nine months, starting the first of the year, it turned out—as long as I'd been unmoored in Portland. It wasn't a permanent arrangement, and it wouldn't be until I moved out of that one that I finally lived somewhere longer than a year for the first time in my adult life.

In those nine months, though, I still made it back to Steam.

I went alone, with friends, with tricks. Sometimes, leaning back in the hot tub, I would just think: Only a few months ago, a few weeks ago, this was home. It was all I knew. My world became this place.

As the gentle rush of the hot tub's bubbles wrapped around my shoulders, it still felt that way.

Portland Is a Haven For LGBTQ Families. Local Couples, a Fertility Doctor and a Surrogacy Lawyer Explain Why.

When I Had No Place Else To Go, I Lived in One of Portland's Last Bathhouses 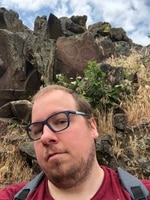 AJ Earl (Comanche Nation) is a freelancer living in the Rockwood neighborhood of far East Portland, where they live with their husband and two cats. A second year Native American Journalism Fellow and recent graduate of Portland State, they will be working on an MA in Public History starting this fall at American University.