The biggest buzzkills for recreational cannabis in Oregon are the public consumption laws. The rules say you’re only allowed to light up in private residences, which means if you rent an apartment that prohibits smoking—or if you’re a tourist who can’t find a pot-friendly Airbnb—your only options are the city’s few cannabis clubs.

Sure, you can always sneak an edible, but where’s the fun in that?But there is a spot right in the middle of Portland where you can freely, openly and legally smoke weed with complete strangers. There’s just one catch—they’ll probably have their penises exposed.

Hawks PDX (234 SE Grand Ave., hawkspdx.com) is a sex club in Southeast Portland. Because it operates on a membership basis, much like a cannabis cafe, the club is allowed to set its own rules regarding cannabis consumption on the premises—and, according to its website, both cigarettes and marijuana are allowed on the clothing-optional patio.

Related: Toke Up For Pride With Six Queer-Friendly Cannabusinesses.

Though Hawks caters primarily to gay men, every Tuesday is Bisexual Night, which was my ticket through the door on a recent evening.

On my visit, I emerged onto the simply adorned patio to find a gentleman prepping his dab rig at one of the wooden picnic tables. He wore a towel, which was more than I had on. He looked up and asked what my favorite strain was, and we spent the next hour swapping hits of Jack Herer Diamond Sauce, as regulars emerged for the occasional blunt before returning to the bacchanal inside.

It’s not often you’re warmly welcomed for crashing a party naked and high. At Hawks, though, it’s an everyday occurrence. 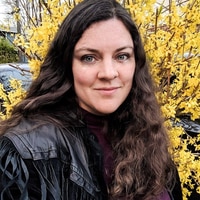 Meghan O'Dea is a writer and editor who traded southern Appalachia for the Pacific Northwest. She writes about camping and the outdoors by day for The Dyrt, and covers food, travel, cannabis, and resilient hearts for publications including Bitch Magazine, Playboy, Bustle, Nylon, the Washington Post, Refinery29, and Yoga Journal.