As a 10-year-old boy in Hazel Dell, Wash., Steve Davies sent letters to all the sports teams he could think of, asking for collectibles. It was 1970, and the newly founded Portland Trail Blazers sent him a pinwheel sticker.

It was the start of a lifelong quest.

Most kids collect sports cards. At some point, they stop. Davies never did. He collected Blazers memorabilia—programs, posters and schedules—by the tens of thousands. The items now fill a guest room in his Washington home. At one point, he estimates he owned 300 game-worn Blazer jerseys.“Well, nobody else was buying them!” Davies says. “Somebody had to save this stuff.”

Davies, now 60 and retired from working in the service department of a car dealership, has become the proprietor of what is surely the world’s largest collection of Blazers knickknacks, curios and rarities. He has a copy of Maurice Lucas’ 1977 championship ring. (“It was too large for his son’s hand, but it fit me.”) He has the promotional sheets that KPTV salesmen used to hawk local game broadcasts to potential advertisers. He has a wooden desk clock that once belonged to Harry Glickman, the team founder who died earlier this year. He has a poster of a California Raisin dunking to celebrate the team’s 1990 NBA Finals appearance. It hangs in his hallway, signed by the late claymation king Will Vinton. 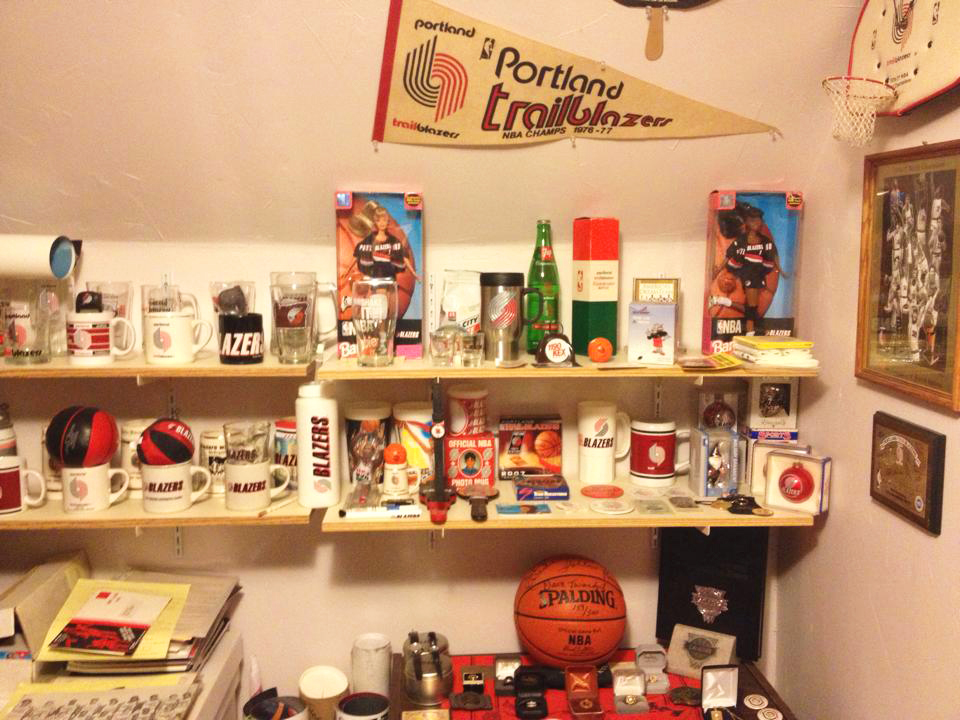 He has so much stuff that he spends much of his time selling it, via his social media accounts. (He’s @blazercollector on Twitter.) In 2009, the Trail Blazers celebrated their 40th anniversary. So they approached Davies. “We’re looking at setting up an area with our history,” he recalls team officials saying, “and you apparently own all of it.” He agreed to sell the franchise some of his most valuable pieces.

In return, the Blazers threw in one more gift: an official jersey with his name on the back and the number 70, because that’s the year he started following the team. Only Glickman, announcer Bill Schonely, and statistician Chuck Charnquist share that honor.

“That’s it,” Davies says. “That’s the pot of gold at the end of the rainbow.”