Technically a part of Kerns, East Burnside street is so packed with excellent bars, shopping and restaurants that we're treating it as its own neighborhood. East Burnside's centrality makes it a hub where the most exciting aspects of four quadrants meet. Its crowd is a mix of skaters from Burnside Skatepark, fashion kids browsing through Machus or any of the area's many vintage shops, foodies from across the country introducing themselves to Le Pigeon's James Beard Award-winning chef, Gabriel Rucker, and young couples trying to make heads or tails of Pix Pâtisserie's drink menu.

Gabriel Rucker's tiny restaurant thrives on the combination of high and low culture; Peking duck breast and an extensive wine list exist alongside the best burger in town and Coors Banquet. Although it's one of the nicest restaurants in the city, the soundtrack includes "Mo Money Mo Problems." Tucked into a stretch of East Burnside full of boutiques, bars and venues, it draws a crowd of knowledgeable locals, girls on their way to karaoke, businessmen and food tourists. Get a seat at the counter, order a burger and thank your lucky stars you live here. $$$-$$$$.

This candlelit creperie behind Burnside Brewing specializes in wine, French bistro fare—such as a buckwheat crepe filled with pork confit, caramelized onion, and apple and pear butter—and a cozy intimacy that can be hard to find in Portland. $-$$.

Yes, you should order whatever pastry is calling to your soul alongside your usual drip or espresso. The coffee will be plenty good, but the pastries have that simultaneous crispy and melt-in-your-mouth chewy texture that makes your eyes roll back into your skull with the first bite. $.

Davenport is a black cube, all reclaimed wood, sharp angles and polished concrete. It's a haven for aesthetes who like things perfectly simple. And indeed, there's nary a misstep in former Evoe chef Kevin Gibson's oft-changing menu of refined, globally influenced Pacific Northwest fare. $$$.

If you get to this little doughnut shop after 9 am, chances are the $1.50 1-pound, perfectly crisped apple fritters or gushy bearclaws will be gone. After 10, you may lose the cinnamon swirls. Beyond 11, take what you can get. $.

Among Portland's New Mexican spots, the Goose is the most ambitious without sacrificing the food's hatch-heavy casual flavor. The Hatch chile burger, smothered in cheddar cheese that leaks onto the plate, is American excess that reaches bold new heights in both savor and goop. $$.

Owner Ken Forkish is arguably the most talented baker in town, so don't plan to leave a little mountain of pizza bones on your plate—that crust is something to look forward to. Save room for the affogato, a Stumptown coffee float with a scoop of nutty, housemade honey vanilla gelato. $$.

Kopi is maybe the only place in Portland that specializes in East Asian coffee. Along with Water Avenue Indonesian beans on drip and espresso, it serves beverages such as Indonesia's jahe kopi—a sweetly biting coffee brewed with fresh ginger—and a super-concentrated Vietnamese-style coffee dripped into kaffir-infused coconut milk. $.

No one denies that Earl Ninsom's Thai fine-dining spot, whose menu regularly changes to reflect different regional cuisines, is one of the best restaurants in town. Whether it's worth enduring the jaw-droppingly long wait for a table is another story. If you have the patience and don't have a seafood allergy, you're in for a treat. $$$$.

Luce defines gritty simplicity. You want a comfy waiting area and tablecloths? Forget about it. But if you want an unadorned bowl of tagliatelle with beef and pork ragu, perfectly al dente and content to let the flavor of a couple of ingredients speak for themselves? You found it. $$-$$$.

We would like to issue an apology to every other ramen place in Portland, because we like you a little bit less now. It's not you—it's Marukin. Order the almost bottomlessly deep miso ramen on Mondays, Thursdays and Fridays, the marvelous subtle paitan shio on Tuesdays and Saturdays, and the tonkotsu shoyu—a milky echo chamber of pork—on Wednesdays and Sundays. $.

In a city full of restaurants that bill themselves as an experience, Navarre lives up to the claim. It feels like being welcomed into a wealthy European family's country kitchen. Order the "dinner for the table" ($32 per person) and make yourself at home. $$$.

Get familiar Thai dishes elsewhere. At PaaDee, look first to the specials board. One of chef Earl Ninsom's whole-fish dishes should be a part of any meal, and a similar complexity can be found in the housemade sausage of pungently spiced pork. $$.

If you ask average Portlanders what their favorite brunch spot is, the answer is probably "Screen Door." Chicken and waffles are mandatory for newcomers. $-$$.

Vietnamese and Cajun are French creole cuisines, river cultures and addicted to spice. So consider it kismet that one of the largest migrations of Vietnamese families arrived in 1970s New Orleans, the hometown of Tapalaya chef Anh Luu. Ask for the specials menu. There's always a mashup you don't expect. $$.

It would be so easy, but wrong, to hate Americano—the new vermouth and coffee bar located in gentrification flash point Burnside 26. It serves a sparkling gamay that might as well be Champagne jam, and the vermouth and amaro selection—French, Italian, Spanish and local—is impressive. The press pots—made-to-order liquor, spice and fruit mixed with soda water—are brilliant. 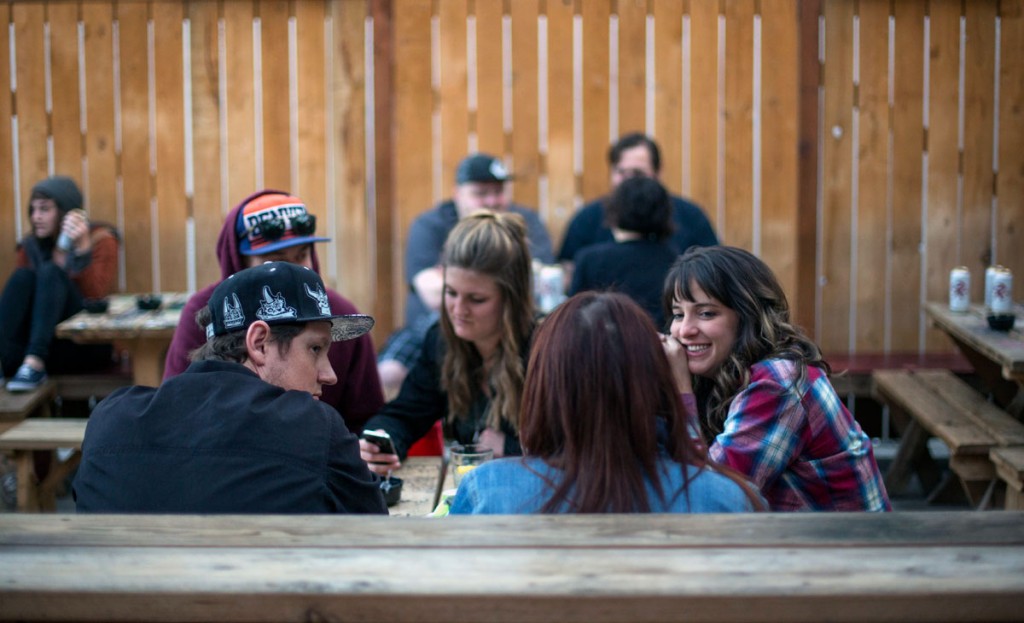 B-Side represents a lack of change in the world. Condos may rise, and car lots may fall on the Burnside bridgehead. Rontoms next door may come in and out of fashion. But B-Side? B-Side spans time like Vincent Gallo in a photo booth.

Between its extensive, off-the-wall lineup of seasonal beers and decor guaranteed to appease the expectations of tourists visiting a Real Portland Brewpub™, Burnside has maintained its status as a must-visit for nearly six years.

Pix Pâtisserie's labyrinthine menu and esoteric ordering system need a user's guide, but the sherry and Champagne lists are two of the best not only in the city but in the entire country, and there are always odd deals to be found.

Walk in during happy hour between May and October, and pretty much every social demographic under age 40 is gathered on the back patio. This is where Portland summers.

The Standard is still the sort of place where favorite regulars get a personal tab. The changing taps of craft beer are $4 and carefully chosen, whiskey comes with a back, and everyone becomes a regular sooner or later.

Union Jacks strip club is the closest you'll get to From Dusk Till Dawn anywhere near the center of Portland. Red lights, tight quarters, vaguely menacing soundtrack veering industrial, large and gruff bouncer, seemingly as many dancers as patrons, and all with either a body mod or an accent.

Portland has several modern, hip, impeccably curated comic shops. Future Dreams is not one of them. It is a huge basement packed with ancient and new comics, books, magazines and every other kind of classic nerd ephemera, piled together in a glorious mess. Hidden treasures await true believers.

Specializing in all things choppable or already chopped—whether it be hip-hop, old soul, house, techno or electro—this weird, low-ceilinged shack is all about that intersection of geek, toker and cool-kid DJ that describes maybe 30 percent of Portland.

Fixin' for fixtures? Hippo Hardware has been selling thousands of antique and new pieces of hardware, lighting and plumbing for decades—everything from art deco chandeliers to Victorian door knockers. Even if you aren't in the home improvement game, it's worth swinging by to marvel at century-old claw-foot bathtubs.

Smut is a vintage store for your cool roommate who collects VHS tapes, old Playboy magazines, vinyl, trucker hats, huge belt buckles and other totems of lovable scumbaggery. It's like a specialty shop for people in their 20s who can pull off a mustache.

Stocking bikes from Marin, Felt, Soma and Public in a roomy warehouse, Crank is a stripped-down, newbie-friendly take on your neighborhood bike shop that offers inexpensive tuneups and touring essentials like food and cookware. Crank also offers rentals for those trying to get down to Belmont without killing their legs.

One of Portland's premier streetwear destinations, Justin Machus' spartan boutique stocks modern, minimalist menswear, and is often the only boutique in Portland that regularly lands extremely sought-after releases from designers like Kanye West and Gosha Rubchinskiy.

Oko carries jewelry, antiques and ceramics that owner Lisa Magnum mostly imports from the Balkans, where she lived for years and frequently visits to restock. It's probably the only place in Portland where you can get 18th-century bronze archers' rings and fertility bracelets, which happen to run for only about $75.

Palace is the eastside's slightly crunchier answer to Alder and Co. (see page 18): a boutique that carries womenswear, cosmetics, ceramics and other fine lady things. It stocks several Portland brands, including Non-Perishable Goods and Portland Apothecary alongside Palace's housemade line of tie-dye T-shirts.

Made internationally famous by its inclusion in the 2000 Playstation classic Tony Hawk's Pro Skater 2, the Burnside Skatepark, now over 25 years old, is one of Portland's enduring monuments to DIY culture. The park evolved from an illegal embankment, built in a homeless camp with a stolen bag of concrete, into a landmark that people travel from across the world to thrash.

Opened in 1923, this Portland institution shows second-run new films alongside classics and indie flicks while serving microbrews and upscale snacks.

At 15,000 square feet, the Portland Rock Gym is the largest rock-climbing gym in Oregon. It is beginner-, pro- and kid-friendly, and the gym also offers daily yoga and fitness classes.