[FURIOUS DESPAIR] Anger is the secret ingredient in many of the best sad songs, but few bands are as fully committed to the pissed-off end of depression's spectrum as Kowloon Walled City. On the band's new album, Grievances, singer-guitarist-producer Scott Evans goes fetal in the dark place between sludge and post-hardcore and gives vent to the nasty and self-defeating thoughts that remain long after the tears have dried. There is no uplift and no hint of escape, but there is terrible beauty in Evans' slow-burning arguments with the abyss. It is a masterpiece of dark artistry to be cherished on the coldest nights. CHRIS STAMM. Black Water Bar, 835 NE Broadway. 8 pm. $10. All ages.

[BOOKS] Depending on your age and cultural persuasions, you know Drew Barrymore as either the littlest kid from E.T., Corey Feldman's main squeeze or the cool teacher from Donny Darko. Forty as of this year, she's taken the occasion to reflect a little on her life, from the drug-addled teen years to her current motherhood. Wait, I forgot Never Been Kissed! Powell's Books at Cedar Hills Crossing, 3415 SW Cedar Hills Blvd., 228-4651. 7 pm. Free. 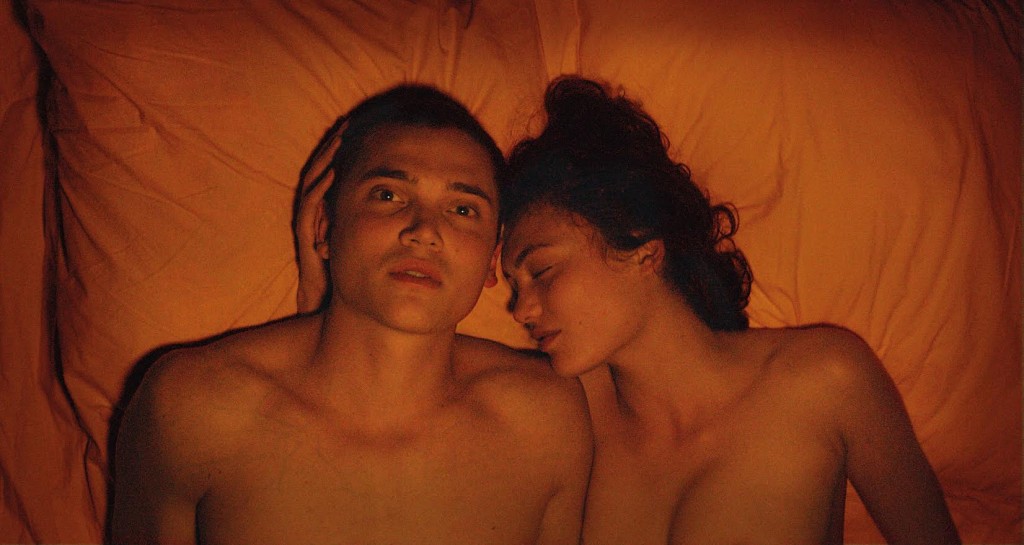 Gaspar Noé's nearly pornographic Love in 3D—starring Portlander Karl Glusman—started as a relatively sweet and straightforward project. "It was a low-budget movie," Noé recalls. "No famous actors. All in French. And I would produce it myself, but when [prospective backers] read the short treatment, they kind of freaked out." The bodily aspects of l'amour in all their turgid, quivering glory dominate the director's fourth feature, which stars Glusman as a young filmmaker in Paris. About half of the 135-minute film of enthusiastic copulation is shot in Old Hollywood style. see it: Love in 3D is rated R. It screens at Cinema 21 on Wednesday, Nov. 4, with Gaspar Noé and Karl Glusman in attendance. 7 pm. Various showtimes through Nov. 12. $11.50.

The Thali Supper Club pop-up offers some of the Portland area's best Indian food, but only once a month and at a $60-plus price tag that leaves a lot of diners out in the cold. Well, set your damn phone alarm. Until it runs out, Thali's Leena Ezekiel will be serving murgh makhani (butter chicken) and goat biryani out of a food cart parked in front of Lardo. Lardo Hawthorne, 1212 SE Hawthorne Blvd., 234-7786. 5 pm.

[CONSCIENCE HIP-HOP] Oddisee is an anachronism, and he knows it. "Glorifying music that's abusive and a threat to us," he raps on his latest album, The Good Fight, "and if you got a message in your records, you collecting dust." Indeed, in the era of monosyllabic trap rap, the former Amir Mohamed is part of a breed of MC that's dying not just in the mainstream but the underground as well, one that prizes ideas above empty punch lines and solutions over nihilism. Of course, a rapper complaining about his own obsolescence is normally a self-fulfilling prophecy. But Odd, who's been kicking around the D.C. scene for more than a decade, isn't just grousing. There's a weariness to his flow (and his singing voice), and the chip on his shoulder gives the music a distinct edge. And lest you dismiss him as a "backpack rap" throwback, his rainbow-bright production—informed by gospel and soul and other, more worldly sounds—goes way beyond retro boom-bap. Holocene, 1001 SE Morrison St. 8 pm. $15. 21+.

[DANIEL CRAIG] How do you like your James Bond? Brooding and brutal, with a healthy dose of melancholic angst? Or breezily throwing out quips as he murders his way around the world? Should his adventures be grounded in his personal tragedies or pit him against megalomaniacal supervillains? Should he beat the villains to death or use wacky gadgets? Should he drink craft cocktails or Heineken? If you answered "all of the above," then you're in luck. Spectre, the 26th Bond film, has it all and more. Critic's Grade: C+. Read AP Kryza's review. Spectre opens today in most Portland area theaters.

Ellington and Strayhorn: A Celebration

[JAZZ ROYALTY] The 23rd International Duke Ellington Study Group Conference happens this year at Reed College, including performers, academics and authors of scholarly tomes about one of America's greatest musicians and his shy sidekick Billy Strayhorn, a composer who took the Ellington band's music to hitherto unparalleled heights of artistic sophistication and broad appeal. Best of all, Friday night's concert pairs for the first time two of Portland's top jazz stars, pianist-composer Darrell Grant and Rebecca Kilgore, in Strayhdorn's luminous songs. You can't take the A train—the title of Strayhorn's most famous composition for Ellington—but you can take the Orange Line. BRETT CAMPBELL. Kaul Auditorium at Reed College, 3203 SE Woodstock Blvd., 7:30 pm. Free.

[THEATER] It sounds like a new sushi spot, unless you're in on the comic-book cult of Stan Sakai's rabbit samurai. We don't usually laud PCC Sylvania as a top stage, but it's worth getting your collector's edition signed by Sakai on opening night. Or just seeing what's bound to be a mindfuck as the warrior bunny goes from graphic novel to masked dancer onstage. PCC Sylvania Performing Arts Center, 12000 SW 49th Ave., 722-4323. Book signing at 6 pm, show at 7 pm. $10.

[WORDSTOCK] Halloween is over, but Wordstock is still undead. After a slow fade leading to its exit in 2013, the fest has been revived by Literary Arts under new director Amanda Bullock—and it's a much bigger, better thing. Portland's biggest book fest has left the Convention Center and is now hosting readings on five stages at the Portland Art Museum and First Congregational Church all day Saturday, Nov. 7. Then, it spreads out all over the eastside in a 100 percent free Lit Crawl. Pre-party at Dig a Pony, 732 SE Grand Ave., 6 pm. Lit Crawl is at various venues. 7:30-9:15 pm. Full schedule at literary-arts.org.

[REMIX WIZARD] It takes a lot of nerve to stake your reputation on the remix of an undisputed R&B classic. But Switzerland native Cyril Hahn wouldn't be here without his intoxicating remix of Destiny's Child's "Say My Name," a burbling house anthem stripped of all pretext and lyrics except that indelible chorus repeated, over and over, in a pitch-shifted voice that defies gender characterization. It's a fantastic remix, and it sets the stage for the rest of Hahn's oeuvre, including this year's Begin EP and 2013's "Perfect Form" single, featuring an expertly floaty vocal from Shy Girls' Dan Vidmar. Hahn is just really good at using vocals—isolating the right moments, surrounding everything with deep clouds of synth and bass and letting the beat build to a perfect climax. Hanh's music gives off the same euphoric feeling as prime Fred Falke—a taste so sweet you'll be dancing all night. MICHAEL MANNHEIMER. Holocene, 1001 SE Morrison St. 10 pm. $18. 21+.

Chef Javier Canteras grew up going to his grandfather's txoko, a supper club in the Basque country. Now he's got his own, alongside chef Ryan Spragg, serving up Basque dishes from calamari to smoked mussels to chorizo-chicken-liver terrine, along with Spanish wine pairings. Check basquesupperclub.com for tickets and details. Friday is sold out. Location disclosed with ticket confirmation. $95.

Four times a year, Oso Market spends a month making the brunch of some faraway place on the weekends. Well, this time they got only as far as Montreal, Canada. Eat French toast, bagels and sockeye lox, pulled pork and poutine and pork shoulder with monk fish and hollandaise. Each weekend day through Nov. 22. Oso Market + Bar, 726 SE Grand Ave., 232-6400. 10 am.

[FEARLESS PIANO] Russian pianist Kirill Gerstein has his work cut out for him. A returning guest of the Oregon Symphony, Gerstein was picked to accompany them as they take on one of the hardest pseudo-concertos in all classical music: Rachmaninoff's Rhapsody on a Theme of Paganini. It's blazing fast, and features clean two-handed runs and atypical harmonies that make it one of the piano world's greatest tongue twisters. A half-hour piece based on 24 variations of Paganini's 24th Caprice for Violin, the composition is so difficult that Rachmaninoff himself was nervous before its debut, and broke his own rule of not drinking before playing. PARKER HALL. Arlene Schnitzer Concert Hall, 1037 SW Broadway, 7:30 pm. $29-$105. All ages.

Raunchy, swinging piano battles and hedonistic Cotton Club acts inspired by the life of jazz piano legend Fats Waller make this Tony Award-winning musical a nostalgic trip from the Harlem Renaissance through to World War II. Portland Center Stage got permission to amp up the play from what it was on Broadway and in the West End, augmenting the cast with Third Rail, Artists Repertory and Portland Playhouse veterans, plus a few London, New Orleans and New York talents like Andre Ward—who did Rock of Ages on Broadway—and David Jennings—who starred in the Broadway version with American Idol's Ruben Studdard. That's a lot of name-dropping, even for PCS. But it's worth a mention that this may be the largest black cast we'll see on any stage this year. Gerding Theater, 128 NW 11th Ave., 445-3700. 7:30 Tuesday-Friday, noon Thursday, 2 pm and 7:30 pm Saturday-Sunday. Through Nov. 29. $30-$75. 12+.

[SILVER SCREEN] It's been a quarter century since what is essentially a kid-friendly remake of Straw Dogs—minus the graphic rape, plus child neglect—became one of the most celebrated Christmas movies of all time. Happy anniversary, Home Alone. Century Clackamas Town Center. 2 and 7 pm Sunday, Nov. 8.

[ART EXHIBIT] Bright, South American-style colors dominate the series of paintings, glass works and textiles themed around "hiding in plain sight" by Portland's Mary Josephson. Her portraits are medium-sized oil paintings on wood, glass mosaics in ornate frames or vibrant embroidery on felt. The textures and intricate patterns in her works are just as front-and-center as the women with thick, black eyebrows that she chose as subjects. Josephson's interest in dreamscapes, secrets and imaginary worlds comes through in the reflective gazes of her subjects, and her intent is to make viewers just as self-reflective. ASHLEY STULL MEYERS. Through Nov. 28. Laura Russo Gallery, 805 NW 21st Ave., 226-2754.

Cloudbust With Us: A Tribute to Kate Bush

[RELEASE THE HOUNDS OF LOVE] Chances are slim Kate Bush herself will ever set foot in Portland. So this tribute to the British art-pop chanteuse, featuring a few of her most well-studied local acolytes, is as close as we'll get. And given who's involved—performers include Sara Jackson-Holman, Johanna Warren and Coco Columbia—it's not such a bad consolation. Holocene, 1001 SE Morrison St., 239-7639. 8:30 pm. $8 advance, $10 day of show. 21+.

[ART POP] On the low, Brooklyn's Here We Go Magic has released some of the more interesting indie-pop records of the last decade. Be Small, its latest, is no exception. It's a slippery, subtly groovy record, which at times almost sounds like '70s soft funk processed through a kaleidoscope, or maybe Radiohead on a yacht. MATTHEW SINGER. Mississippi Studios, 3939 N Mississippi Ave. 9 pm. $12 advance, $14 day of show. 21+.