Greg Goodman is getting a bigger slice of the sky.

And now some Portlanders are asking whether that's because Goodman, scion to one of Portland's most powerful landowning families, played an unfair role in the city's redrawing of the downtown horizon. 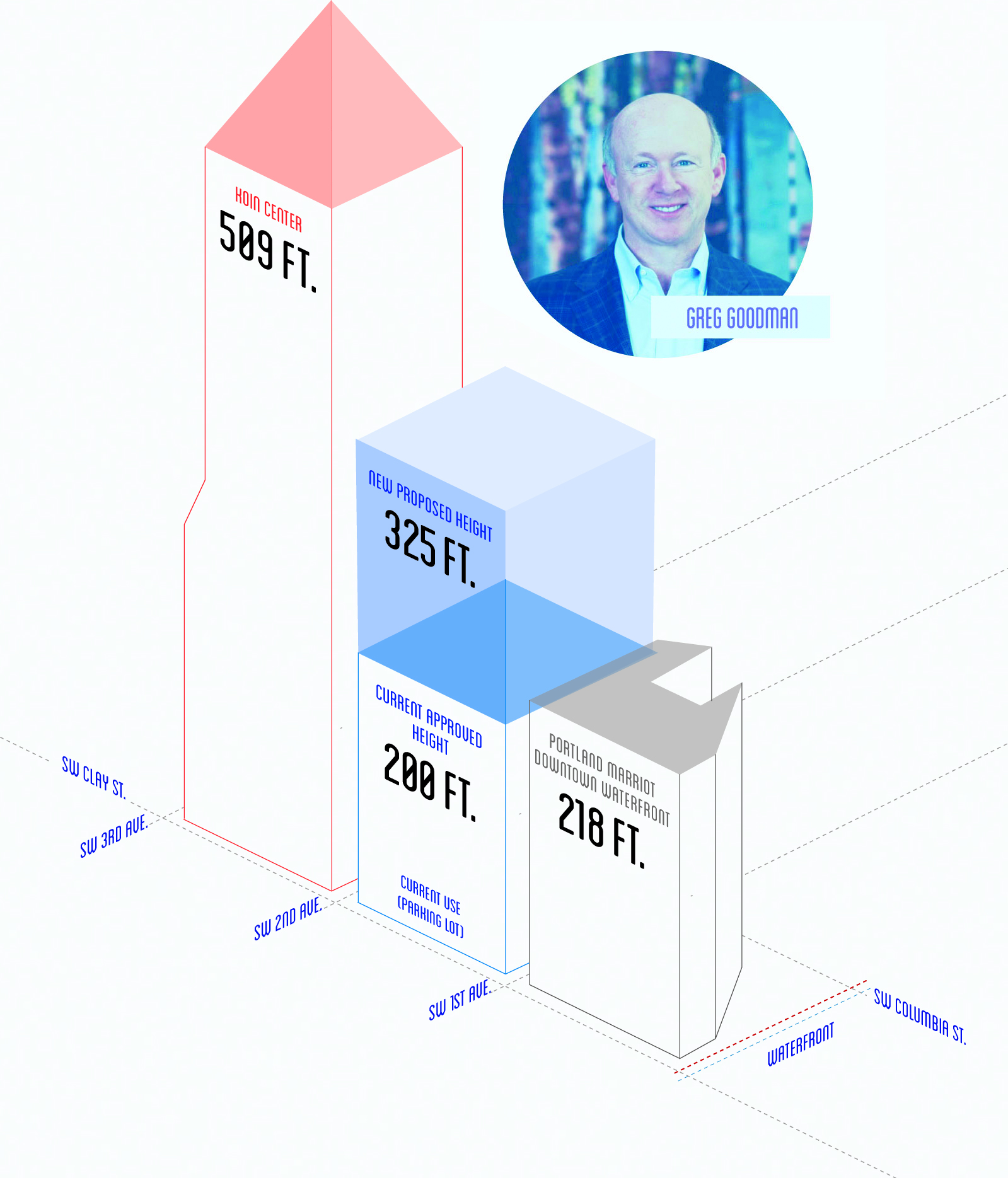 Goodman volunteered two years ago to serve on a city advisory committee that would make key recommendations on downtown Portland's zoning regulations, including height limits on new buildings.

The City Council tentatively approved the changes in March, and is poised to solidify those recommendations next year.

Goodman and his entities own numerous parking lots and buildings in the central city. He and 15 other downtown landowners and developers who sat on the 33-member committee—and voted for the recommendations—could benefit from the changes.

Those changes, dubbed the West Quadrant Plan, vastly expand the number of sites downtown where developers can build towers up to 460 feet high. They also promise to transform the western Willamette riverfront.

That's especially true around the west entrances to the Morrison and Hawthorne bridges, where height limits will rise from 75 feet to 250 feet in some places and from 235 feet to 325 feet in others.

City Ombudsman Margie Sollinger issued an ethics ruling Oct. 21 that members of city advisory committees are public officials, and therefore Goodman and others should have been advised by city staff to declare potential conflicts of interests before voting on the changes.

"Public disclosure of a potential conflict of interest is a critical safeguard," Sollinger wrote. "That did not happen."

The Northwest Examiner first reported complaints about a potential conflict and Sollinger's ruling.

Goodman says he has no problem with formally declaring his potential conflicts of interests. "I agree with that," he says. He says he'd be opposed, however, if Portlanders with conflicts weren't allowed to serve at all—something Sollinger specifically didn't call for. "Everybody loses," he says, "if you don't have skilled people talking."

Representatives of the city's Bureau of Planning and Sustainability deny any undue influence by landowners and developers. They say the increased heights along the riverfront are designed to draw more Portlanders to the waterfront and encourage development at sites that have long lain fallow.

"We were trying to be really strategic," says associate city planner Kathryn Hartinger. "There is a rationale for everything."

On Nov. 15, 2013, Goodman emailed other advisory committee members. The subject: "Building Heights." Goodman advocated four specific changes to the city's proposal as it then stood. All four changes related to properties his entities own.

Goodman, who owns some 60 properties, doesn't dispute he benefited at two of those locations, one near the west entrance to the Morrison Bridge and another south of the Hawthorne Bridge near the Portland Marriott Downtown Waterfront.

Goodman calls the overall benefit to him "infinitesimal." But a property with taller building-height limits that promises views over the Marriott to Portland's waterfront would be significantly more valuable.

"Nobody made a good case for why those buildings had to be that tall," Fritz tells WW, adding that she's particularly troubled by the idea of very tall buildings immediately next to the river, where the city has historically imposed stricter limits. "They're going to stick out like sore thumbs."

Steve Pinger, a member of the advisory group who represented Northwest Portland's neighborhood association, says he is concerned about the heavy influence of developers on the outcome.

"Portland has been well-served by a development community that has operated under an enlightened self-interest," says Pinger. "But I think that time is passing."