Portland Authorities Released a Man Who Allegedly Molested a 12-Year-Old Girl. Then Her Mother Found Evidence of More Crimes.

Her story provides a window into the way Portland police and Multnomah County prosecutors make decisions in sexual assault cases.

A little after 3 am on a February night, Michele Wilkens called the Portland Police Bureau.

Minutes earlier, Wilkens' daughter, 12, burst into her bedroom crying.
"Daniel was in my room with his pants down, rubbing against my leg," the girl told her mother.

The alleged intruder was Daniel Armando Gonzalez, 49, who rented a room in Wilkens' Piedmont neighborhood home.

Wilkens (last name changed to protect the victim) called the cops. They arrested Gonzalez for sexual abuse in the first degree, a felony that carries a mandatory minimum sentence of 75 months. But 36 hours later, they let him go.

A few days later, a relative of Wilkens' searched Gonzalez's now-vacant room and found a flash drive that appeared to show Gonzalez had been shooting video up the skirts and dresses of visitors to Legacy Emanuel Medical Center, where he worked.

But he has disappeared.

Wilkens says her dealings with law enforcement officials in the past two months have left her questioning the decision to release Gonzalez from custody in the first place.

Wilkens is black and earns a modest income. She questions whether the concerns of Portlanders of her race and economic status are given sufficient attention.
"If it had been a white girl on the westside this happened to," she says, "he probably wouldn't have been let out."

The story of Gonzalez's arrest and release provides a window into the way Portland police and Multnomah County prosecutors make decisions in alleged sexual assault cases. Wilkens says police and prosecutors rarely returned her calls and failed to tell her when Gonzalez was released from jail, leaving her to discover that online.

"The secrecy around an investigation can make victims and their families feel they are being ignored," says Rosemary Brewer, a former prosecutor and executive director of the Oregon Crime Victims Law Center. "If you come from a population that expects to be treated badly by police and prosecutors, you are going to feel it more."

Police arrived Feb. 28 and arrested Gonzalez without incident. He had rented a room in the house for 2½ years, according to court records. He said he was born in El Salvador but had lived in Portland since 1990. Records showed he'd been arrested previously in California but never convicted. At the time of his arrest, he worked at Legacy Emanuel in North Portland as a floor technician. He'd been there for nine years, he said, and earned $19.90 an hour. 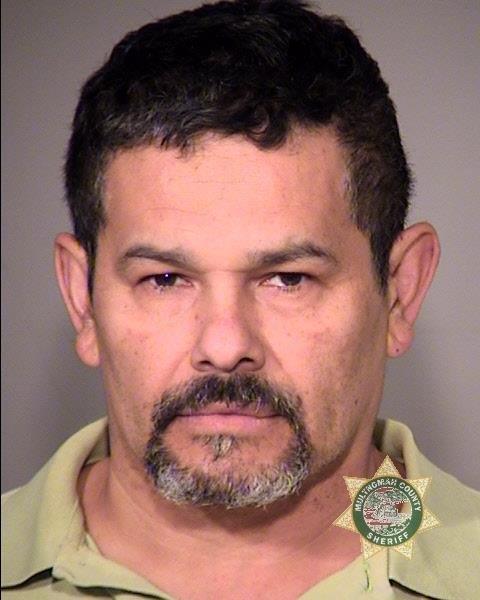 Wilkens and her children moved into the house, which belongs to her grandfather, in 2016. She says they rarely saw Gonzalez. "He had a second job," she says. "He was never there."

On the morning Gonzalez was arrested, the girl gave a statement to investigators, and her leg was swabbed for DNA.

Wilkens says a detective texted her that morning saying police would come to collect the sheets from the girl's bed later that day.

She says she believes the swab from her daughter's leg yielded Gonzalez's DNA because the detective texted her later and told her not to bother saving the sheets. (Police declined to comment. DNA evidence can, however, take weeks to test.)

But the next day, the Multnomah County District Attorney's Office "no-complainted" the case, which means it dropped the charge against Gonzalez and released him 36 hours after he'd been booked.

Prosecutors often drop cases in which a suspect has been arrested without an extensive prior investigation. They may determine there is no basis for charges or ask police to investigate further.

Once a suspect has been arrested, prosecutors must bring a case before a grand jury within five business days or release the suspect. If they present an incomplete or weak case and the jury declines to indict, it's difficult for them to bring the case again.

Police escorted Gonzalez back to the North Portland home, where he and the girl lived, so he could pick up his belongings and move elsewhere.

Wilkens says she was very upset authorities released him. She says she believed, based on the detective's text message, police had enough to hold him.

"They had the DNA and her statement," she says. "It made me feel like they thought my daughter was a liar."

Don Rees, chief deputy district attorney, says his office cannot comment on the specifics of a pending case, including why Gonzalez was released, but says prosecutors were diligently working toward determining the truth.

"Any delays post-arrest were related to further investigation and legal research and to make sure constitutional rights of the accused are protected," Rees says.

A couple of days after Gonzalez was released, Wilkens says, another family member was cleaning Gonzalez's room and found a flash drive in the closet he'd used.

Wilkens says she downloaded the flash drive on her computer and watched the video on it to see if there were any images of her daughter or her two other children on it.

She says the drive did not contain images of her family. It did include dozens of images that appeared to come from a camera pointed up women's dresses and skirts—a hidden camera mounted on a floor mop.

She says the video captured Gonzalez's face at times and also included time and date stamps. (That flash drive is apparently the basis for 33 counts of invasion of personal privacy "on or between Aug. 10, 2015, and April 17, 2016.")

Wilkens says after discovering the flash drive, she called Legacy's human resources department to tell what she'd seen and that she'd turned it over to police.

"They said, 'You did the right thing, but don't tell anybody about it,'" Wilkens recalls.

A Legacy spokeswoman declined to respond to Wilkens' concern the hospital wanted to cover up the alleged filming.

"As soon as we were notified of Daniel Gonzalez's arrest, we took swift and appropriate action and can confirm he no longer works for us," Legacy spokeswoman Megan Deisler said in a statement. Deisler declined to answer other questions.

Police Bureau spokesman Sgt. Pete Simpson says he can't comment on a pending investigation. But when WW asked whether police were less aggressive in their  investigation and less communicative with the family because the alleged victim is black, Simpson replied, "The answer is a categorical no."

On March 27, a Multnomah County grand jury indicted Gonzalez on charges of attempted sexual abuse in the first degree and private indecency related to the girl and 33 counts of invasion of personal privacy related to the hidden camera.

But by that time, he was gone. Gonzalez no longer lived at the address where the alleged crime occurred, and he'd been fired from his job.
Rees says his office has done everything it could to communicate with the girl's family and that publicity now just makes authorities' jobs harder.

"The U.S. marshals office indicates publication of this story will hinder their efforts to apprehend the subject," Rees says.

Wilkens says she's talking before Gonzalez's trial—if he's apprehended—not because she's seeking publicity or planning to file a lawsuit but because she wants law enforcement officials to take responsibility.

"I want them to know they were wrong and they didn't do their jobs," she says.
She says her kids are fearful because Gonzalez is free.

"It just makes me so angry," Wilkens says. "He's out there walking the streets because they didn't hold him and they didn't make him give a reporting address.

"It took them a month to bring these charges," she adds. "They had the videos. That's ridiculous."