Portland Public Schools' explanation for why a superintendent candidate the district anointed in March 3 won't be coming to Portland after all is a head-scratcher.

After WW broke the news that Donyall Dickey won't in fact be PPS' new superintendent, PPS issued a statement saying the decision not to move forward was "mutual. "

That's puzzling. Taking the Portland job would represent a major promotion for Dickey, whose moves from administrative positions in Baltimore, Philadelphia and Atlanta within the past five years speak to his ambition.

At a press conference this afternoon, PPS Board Chair Tom Koehler said he received a final due diligence report on Dickey on Monday, May 1. Koehler repeatedly declined to say what new information the report contained.

There was unlikely to be anything in the report that was news to Dickey. But there apparently was information new to the board, which until this week expressed great confidence in his ability to lead PPS forward.

"We're not going to get into the details of that," Koehler said.

Koehler explained that after receiving the report he consulted with fellow board members verbally about the contents of the report and that they reached a decision not to finalize a contract with Dickey.

Amy Kohnstamm, another board member who spoke at this afternoon's press conference , told reporters that hiring a superintendent "is the most important decision a board makes."

The board made this one in an unusual fashion.

In Oregon, governing bodies, such as the publicly-elected school board, are supposed to make their decisions in public. The Attorney General's guidance on public meetings puts it this way: "It is the intent of ORS 192.610 to 192.690 [statutes collectively referred to as the public meetings law] that decisions of governing bodies be arrived at openly."

That did not happen.

Board members arrived at the decision to reverse themselves and un-hire Dickey in private.

What's more, they appeared to have decided not to hire him before he withdrew—his letter to the board announcing his withdrawal is dated May 4, three days after Koehler received the final background report on the candidate.

As recently as May 3, Dickey was accepting well-wishers' congratulations on Twitter as he prepared to leave Atlanta for Portland. 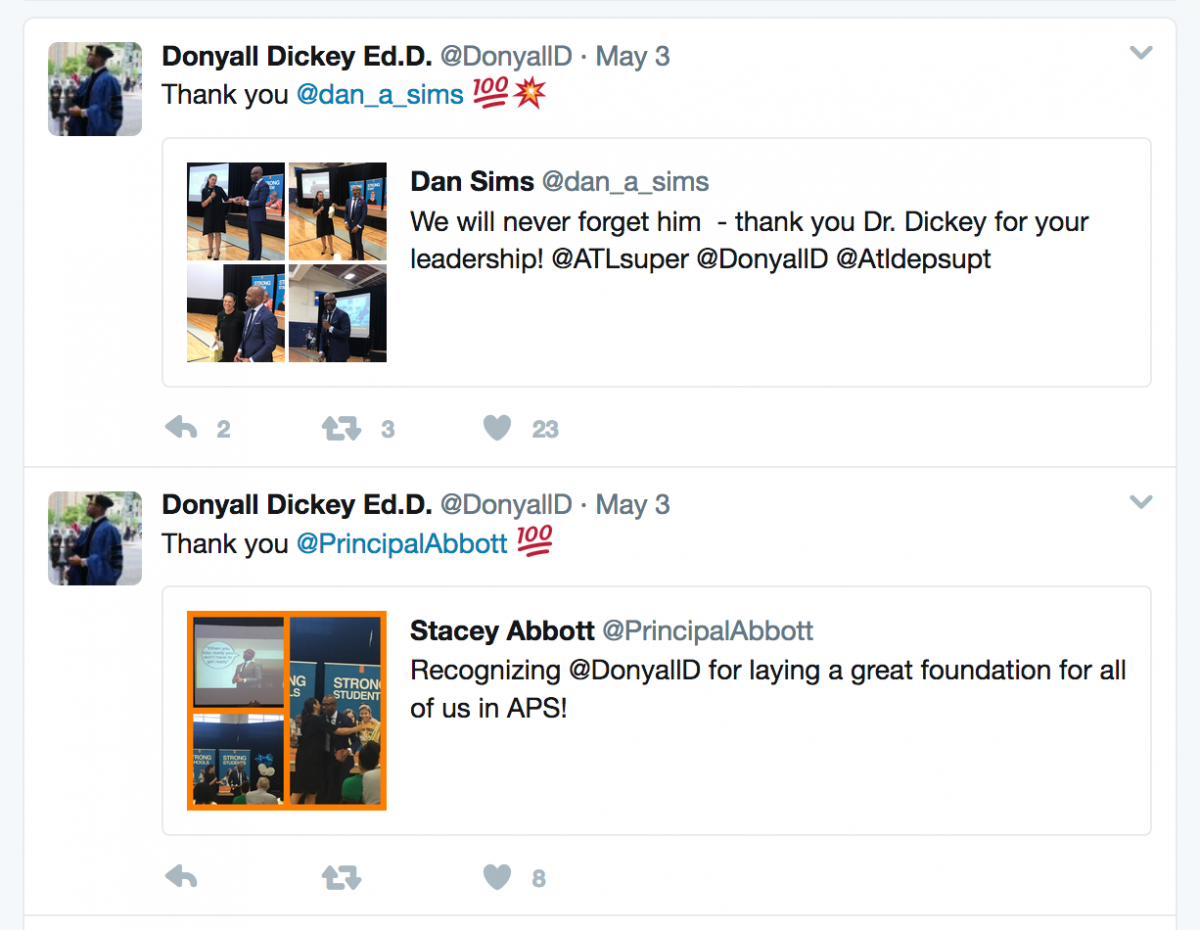 Dickey's brief May 4 letter gives a clue about the tension between him and the board. "After deep reflection I have decided to pursue other PreK-12 opportunities and to continue my consulting work, supporting other school districts in their effort to implement reforms that improve achievement for all students."

Koehler said the board wanted 100 percent of Dickey's attention and did not want him pursuing outside business opportunities.

A recent post on a Portland education blog reported that Dickey founded a consulting firm, Educational Epiphany, and allegedly pursued outside work while serving as chief academic officer in the Philadelphia school district.

The statements by Dickey and PPS suggest that his consulting business was one of the sticking points after he was announced as a finalist. (Dickey could not be reached for comment.)

The district will now restart a search process on which it has already spent $75,000, plus travel expenses for Dickey to visit Portland twice and for board members to visit Atlanta.

Interim Superintendent Bob McKean's contract is up at the end of June and he said today he doesn't expect to serve after that.

Despite the outcome, Koehler defended the board's process, saying the board did initial due diligence before introducing Dickey as the lone finalist in March, then did significant additional work before arriving at the decision to look elsewhere.

"I'm feeling like we made the right decision," Koehler said. "The timing was not ideal, but I'm feeling good about the decision."

The timing he's referring to: The May 16 election, in which PPS is asking voters for $790 million.