The number of people who died in Multnomah County while homeless increased sharply in 2019, long before the coronavirus upended Oregon's economy.

In "Domicile Unknown," the report Multnomah County released Monday morning in conjunction with Street Roots, officials documented 113 deaths on the street in 2019, an increase of nearly 23% from the 2018 total of 92.

It's important to note that those deaths occurred at a time when Oregon's economy was still riding the strength of a long-term economic expansion that drove unemployment to record lows.

The big increase in deaths ties in with a finding from the 2019 point-in-time count, the biennial one-day census of homeless county residents. That report found that while the overall number remained about the same, the number of people categorized as "chronically homeless" had risen about 37%.

A county review of 2019 death certificates found that substance abuse was a factor in many of the deaths. 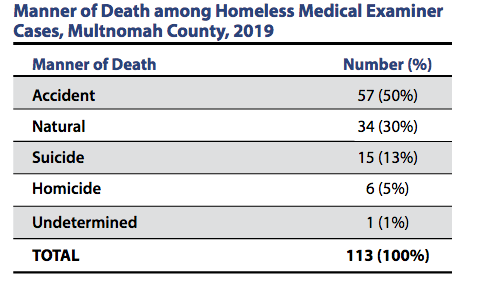 The year’s increase was in homeless deaths was larger than normal in percentage terms.

But since the county, under then-public health officer Dr. Paul Lewis, began tracking such deaths in 2011 at the impetus of Street Roots, the increase has averaged in the double digits and now totals 643 deaths.

Lewis, who retired from the county but continues to oversee the report, said although this year’s number is by far the highest yet, he believes it’s conservative and may undercount the true number of deaths by as much as 30%.

Lewis told reporters this morning that a couple of the details in this year’s report surprised him: first, the toll that meth, which he called a “particularly pernicious” drug, exacted.

“The ecosystem we’ve developed in this country has led to 90% pure meth being available for about the price of a latte,” Lewis said. He added that alcohol surpassing opioids as the second-most deadly substance also surprised him. 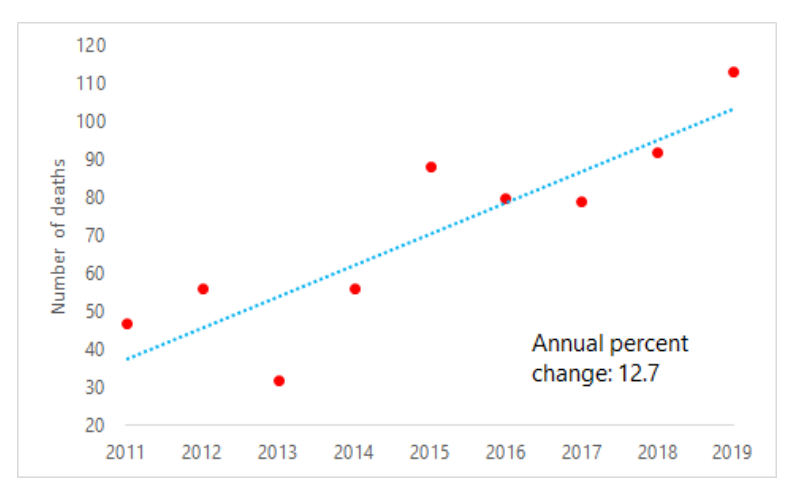 “‘Domicile Unknown’ is a stark assessment of what’s at stake as long as people experience homelessness,” Kafoury said in a statement. “But it also compels and commits us to build up the response we know our community deserves.”