Oregon has fall color, if you know where to look.

Fall is a time of bliss in the Pacific Northwest—as long as you don't mind the occasional cold snap. The tourist crowds thin, the air becomes brisk, and the lush greenery of summer gives way to a delicate tapestry of greens, reds and yellows. We don't have the colors of New England, but aspiring leaf peepers can find scenic cliff tops or follow creeks peppered with burning maple. Here are seven favorites. 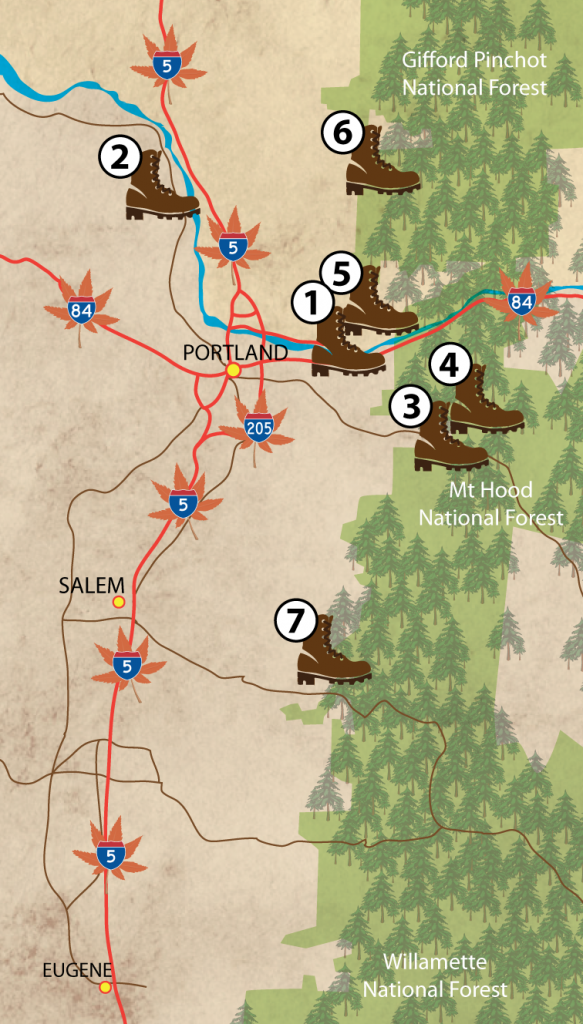 40 minutes from Portland: From I-84 east, take Exit 28 and turn right on the Historic Columbia River Highway. Head west for roughly 3 miles and park at either side of the trailhead.

The Columbia River Gorge is known for its waterfalls. Latourell is the most underappreciated of the bunch until fall, when the rich undergrowth of vine maples contrasts with bright green lichen to dramatic effect. The gentle footpath begins at the base of the 249-foot plunge that is Lower Latourell, but it quickly ascends into a wooded area dotted with sword ferns before looping around a second, double-tiered cascade and a barrage of viewpoints overlooking the Gorge and surrounding peaks. The loose disparity of colors makes views of Lower and Upper Latourell Falls seem like a Pollock original—circa 1948, of course.

80 minutes from Portland: Take U.S. 26 west and turn right on OR-47 toward Vernonia. Stay on the highway until you hit Apiary Road, turn right, and do so again at Camp Wilkerson Road. Park near the horse camp. $3 day-use fee.

During the autumn months, the quaint logging town of Vernonia lets you indulge in a kaleidoscope of colors. The Liahona Trail, located 15-odd miles out of town, offers a similar experience. This pleasant romp encircles the amenities in the center of the 280-acre park, while sticking to a ring of undeveloped patches free of hoof prints despite occasional equestrian traffic. Salmonberry thickets and alder shoulder you as you cross several streams and a few inclines, but thankfully, the trail is well marked with a sea of pink signs depicting a horseshoe.

75 minutes from Portland: Head east on U.S. 26 and turn right on Salmon River Road, just past Welches. Continue until you see the gateway sign to the Mount Hood National Forest. The trail starts at the first pullout beyond the sign.

Traffic is quickly becoming the bane of every Portlander's existence. But traffic is so light along Salmon River Road that it's easy to forget that the trail parallels asphalt nearly the entire way. The result is a quiet venture that straddles the scenic Salmon River, ferrying you over flat terrain and through groves of massive, old-growth cedar and Douglas fir. The only thing more eye-catching this time of year than the abundance of leaves on the ground is the Chinook salmon migrating upstream from the Columbia River to spawn—assuming warm water and low snowpack don't impede their progress.

Ramona Falls is infamous, no matter the season or your stance on the Portland band of the same name. The well-graded hike first follows the eroded banks of the Sandy River, eventually linking up with the Pacific Crest Trail after you cross tumultuous waters . The popular ascent provides remarkable glimpses of Mount Hood as you weave in and out of scarlet canopies of maple and alder, the same ones that ultimately turn the hike's final, storybook cascade into a phosphorescent jumble of rivulets at twilight. The wooden footbridge and natural amphitheater provide the best views, although the creekside trek back to the car isn't half bad either.

Note: The temporary bridge on the Ramona Falls trail is down for the season. The forest service has been having discussions about possibly leaving it down indefinitely. The trail is still totally manageable this time of year so long as you use caution when crossing the river. Hikers can ford the river, but there are also typically logjams where you can cross without ever dipping your feet in the water.

40 minutes from Portland: Take I-5 north and turn right on WA-14 after crossing the Columbia River. Head east to Milepost 26, turn left on Salmon Falls Road, and use the parking lot on your immediate right.

Much like a fresh-hop beer, hiking the full extent of Washington's Cape Horn is a time-sensitive affair. Although the lower portion of the arduous trail is closed nearly six months of the year to protect nesting peregrine falcons, the moss-covered talus slopes and switchbacks open in the fall, granting you staggering cliffside vistas and a view from atop the longest railroad tunnel in the Gorge. Foothills clad with white oak and hushed, big leaf maple also complement the trickling waterfalls and meadows along the way, the latter of which seem more apt for the English countryside than the rugged Cascade region of the Pacific Northwest. Just don't forget your boots—mud is inevitable.

95 minutes from Portland: Head north on I-5 and take Exit 11. Merge with WA-502E, turn left for WA-503N in Battle Ground, and follow the road through Amboy. Turn on Northeast Healy Road in Chelatchie, turn left on Forest Road 57, and make a sharp left on FR 5701. Drive another 4 miles to the trailhead.

Waterfalls are the main attraction along most hikes near Portland, including those nestled within Gifford Pinchot National Forest. The Siouxon Creek Trail—pronounced "SOO-sahn"—abuts its namesake as you might expect. However, it's the 50-foot endcap at Chinook Falls that makes the modest haul worthwhile. The canyon's vast emerald pools, now forgotten summer hotspots, showcase a dazzling display of colors in early November, while remnants of the 1902 Yacolt Burn mix with the old-growth and wealth of campsites beside the creek. Wildcat Falls sits even farther up for those willing to ford the knee-deep waters of Chinook Creek, beckoning like a double-shot latte.

2 hours from Portland: Follow I-5 south to Salem and take Exit 253 for OR-22. Head east for about 23 miles, turn left on North Fork Road, and take a right on Elkhorn Road. Cross the bridge and park at the trailhead just down the road. $5 recreation fee.

The Little North Santiam Trail deserves more attention. It boasts nearly all the better-known merits of Opal Creek without the foot traffic and decrepit mining equipment, letting you meander alongside pellucid waters and among towering rock pinnacles in solitary fashion. A veil of maple and robust, old-growth cedar enshrouds the tributary and the well-marked entrance as well, lighting your way as you crisscross burbling creeks on your hike toward the Shady Grove Campground.