Before we extol the many virtues of Trailhead Coffee Roasters' newest foray into the world of brick and mortar, we'll begrudgingly feed the elephant in the room that will surely derail many conversations about this lovely spot into a trite argument about Old versus New. Like seemingly every new third-wave cafe, Cup & Bar has fancy avocado toast on the menu. But that toast is very good, and the coffee offerings are diverse and made with care, ranging from a bright and fruity drip offering from Kenya to an Old Fashioned-inspired mocktail that subbed cold brew for whiskey ($4). The stark modernism that haunts most third-wave shops is smoothed over by a rustic, woodsman aesthetic that's guaranteed to annoy those who are hopelessly devoted to the frumpy couches of Anna Bannanas and the like, but the kind of multiuse hub of early-morning caffeination and early-evening libation that Cup & Bar so wonderfully functions as is not the kind of place you'd find those kind of people in the first place. PETE COTTELL.

Inconspicuously tucked into a pastel-painted condo development bordering Lombard's dive bars, Columbia International Cup has become a gathering place for a diverse range of communities, from Hispanic residents to emigres from Ethiopia, Somalia, Chad and the many other African countries that Jamaica-born owner Brian Bottman says are represented in the neighborhood. Sure, it serves sustainably grown Jasmine Pearl loose-leaf teas and World Cup espresso, but its real mission is hosting kids' photography classes, Yahtzee tournaments and the All-African People's Revolutionary Party's breakfast program for low-income schoolchildren. Its Mexican, chai and plain latte varieties hover around the standard $3 mark, and you can get a PB&J or oxtail soup (both $5). They also plan a series of African-cuisine pop-up dinners working from the north to the south of the continent. For a place that opened in April with the aesthetic of a rec-center cafe—laminate counters, exposed silver ventilation pipes and IKEA-style pendulum lights—it's got a hell of a lot more soul than any reclaimed-wood roastery. ENID SPITZ.

After weeks searching online, Joseph Nazir had to fetch his cafe from San Francisco, in the form of a beautiful, cherry red double-decker bus. He's since parked it in the back of a Hawthorne Boulevard parking lot, with a tented rooftop decked out like a sitting room in his native Egypt. But Nazir wasn't legally allowed to drive it onto the lot until he'd ripped out all the seats and built his cafe within so that it was technically no longer a bus—until then, he would have needed a commercial driver's license. But novelty aside, Nazir makes the best cup of Turkish coffee I've had in Portland—rich and deep and spiced to a low-toned pungency that descends warmly into your chest—alongside karkadeh, a hibiscus tea, as well as sahlep, a milky drink made with nutty orchid flour. The best drink of them all, however, is a fresh-mint cold brew coffee touched with hints of subtle spice. But if you're not into subtlety, go for the "Are You Crazy?" and take your Turkish with an extra shot of espresso to get yourself wired up like Ace Frehley's microphone. MATTHEW KORFHAGE.

Locale, modeled after the day-drinksy coffee bars of Europe, serves a perma-tap of Pilsner Urquell poured with extra foam so the beer never touches oxygen. The shelves behind the bar serve possibly the city's most ambitious selection of vermouth, not to mention the occasional vermut, and if you're getting your meticulously brewed cup of Heart coffee to stay, the barista will pretty much insist on bringing it out to where you're sitting, perhaps with a little crusty bread wrapped around some Chop charcuterie or a pungent snack mix in which every ingredient is weirdly unexpected: dehydrated garbanzos and crispy lima chips, say. This tiny Mississippi Avenue hole in the wall—built out in white tile and geometric wood panels—is a little like a boozier version of nearby twee breakfast nook Sweedeedee, or maybe a less boozy version of Tabor's Tannery Bar. But like both of those places, the cafe tempers its preciousness with straightforward competence. There's simply nothing bad here. MATTHEW KORFHAGE.

Happy Cup exists sort of as an ode to squishy feelings: When I walked into a backroom stacked with beanbags at Happy's newest location on Killingsworth Street, Portland entertainer Nikki Brown Clown was in the back setting up a book table for her Tuesday-morning gig entertaining preschoolers. Other days, the room might house a sewing club, a book group, or a small press reading. Meanwhile, the coffee is roasted in part by adults with disabilities, and the proceeds from the three cafes flip out to related programs. It's hard not to feel good about it all. But this is the thing: It's also one of the better examples of a solidly domestic cafe in town, with decent coffee, two neat copies of The New York Times laid out each day in a gesture of squarely old-school hospitality, an array of couches neither too soft nor too hard, and plenty of corners where you can plug in a laptop or just plain hide. A word, however: That piano in the back looks nice, but don't sit by it. Just…trust me on that. MATTHEW KORFHAGE.

When we put out last year's Klatch, we ignored Coava's new Hawthorne location—but we shouldn't have. The little apartment-rowhouse espresso bar with woodblock tables and flower pots has grown on us mightily in the past year. Because here's the thing: Coava's original location on Southeast Grand Avenue is a trademark local shrine to artisan coffee, a literal showroom in which sippers must contend with odd machine parts and sparse seating in the name of aesthetics. It's where you take your Minnesotan parents when you want to impress and intimidate them with just how cool you've become in Portland. But on Hawthorne, you can take that same excellent espresso—or a single-origin mocha even—in old-school comfort, in a cushy chair next to a fireplace that lets you nestle in with your warm, warm laptop. It is heaven. MATTHEW KORFHAGE.

Katy Millard's new French spot, Coquine, has gotten a lot of love citywide, but this little cafe perched on the north side of Mount Tabor is very much a neighborhood spot at heart. On weekend mornings, the restaurant is packed with families and older couples, coming across less as somewhere to send morning emails than the type of spot where parents let their kids eat the house's much-loved chocolate-chip cookies for breakfast. On our most recent visit, it was clear the staff was a little overwhelmed by its popularity, leaving dirty plates on tables and struggling to keep up with the pace of orders. But a Stumptown Americano was well-made, the pastries are all excellent, and the shop boasts an esoteric selection of teas from local teamakers T Project and Totem, including a bitten-leaf oolong that had been nibbled by leafhoppers while growing so it would produce more sugar. MARTIN CIZMAR.

After a trip to Indonesia, normal life just wasn't cutting it for Lindsey Nack and Joshua Lee Vineyard. As they hopped from island to island, they drank the local specialties of jahe kopi—the sweetly biting coffee brewed all over the country using bits of fresh ginger—as well as pokak Madura, a ginger-clove-anise tea drink native to one of the midsized islands. And so the pair sank their entire life savings into buying charming coffee dive Green Beans, next to the blossoming Screen Door brunch crowds. In addition to Water Avenue's Indonesian beans on drip and espresso, the pair has expanded their exotic coffees and other drinks to include much of East Asia, offering pour-over (Japanese, if you didn't know) and especially a super-concentrated Vietnamese-style coffee brewed traditionally over several minutes, dripped into a house kaffir-infused coconut milk that can also roll into lattes. They're careful to call the place Indonesian-inspired, not Indonesian, but that Vietnamese brew may actually be the main draw. MATTHEW KORFHAGE. 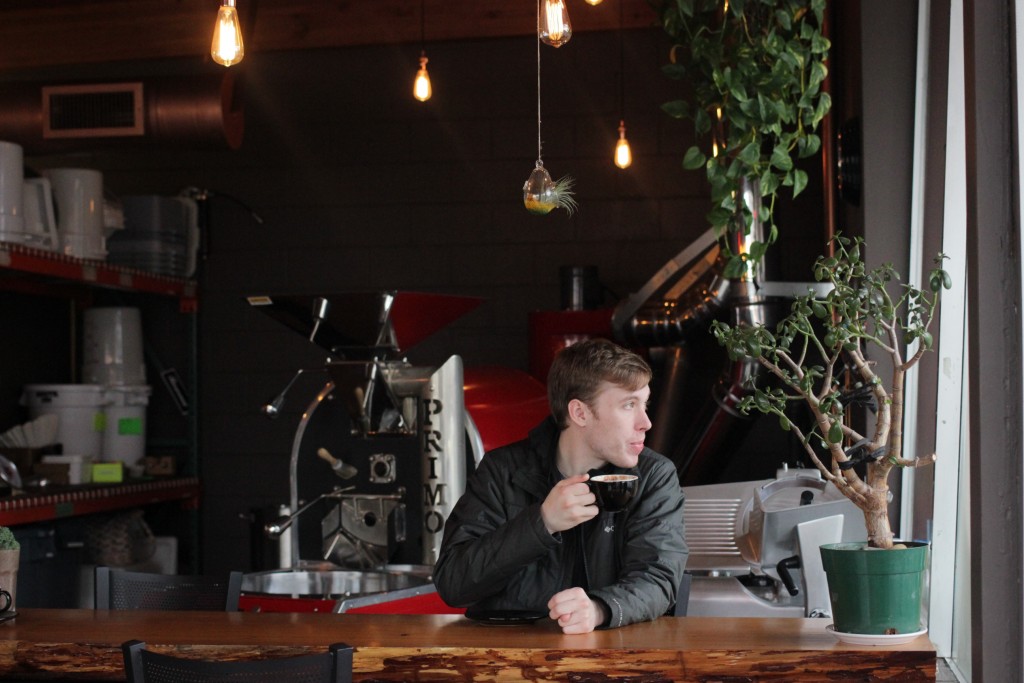 In a perfect world, upstart coffee shops needn't adhere to stringent aesthetic guidelines to serve a quality product. Gone would be the reclaimed wood, clean lines and that same goddamn Smiths/Shins/Spoon Pandora station. Instead, you should be able to have great coffee served in a room with a hodgepodge of gilded, pseudo-Euro flourishes and walls lined with canvas prints of High Times centerfold-caliber nugs. And a twisted fountain right smack in the middle of it all, because fuck it, why not? East Portland Coffee Roasters seems dedicated to that spirit: Fuck it. Stay open 24 hours, because why not? Throw every delicious idea against the proverbial wall to see what sticks. And those pictures of bud make sense, anyway. They're the only way to account for the Tillamook ice cream and the huge bread case and the paninis and the array of loose candy dispensers next to the register. Whoever wanders in from 82nd in the nether hours will probably find what they need, whether a strawberry smoothie or a double shot of espresso roasted onsite.

Like Brazil's Nossa Familia, the Sandino Brothers are taking over Portland coffee from the south. Winston and Lenner Sandino are fifth-generation coffee farmers in Nicaragua, but their roastery is here in town, where Winston lives with his wife. Their cafe takes over for the short-lived Revolución Cafe in the Portland Mercado, the little one-stop Latin-American food complex at the southeastern edge of Foster-Powell. It's pretty much just an elbowed counter with a pastry case featuring sandwiches and tarts, plus a row of seats on which children of the complex's other business owners have taken up intermittent residence. A little chalkboard drawing, made by the steady hand of the nearby butcher, shows the proportions of milk and cream and sugar needed to make a cafecito, a caffe breve or an espresso con panna. A cortado, offered though not pictured, is masterfully rich and deep, and the champurrado—a Nicaraguan-style corn-thickened hot chocolate, probably one-ups it. MATTHEW KORFHAGE.

The Year in Portland Coffee 2015

Revenge of the Teas

Which Drive-Thru Cup is for You?

Where You Can Still Use a Laptop in a Portland Cafe?