For Valentine's Day, we tried out the wares of Portland's artisan chocolatiers.

To most Portlanders, chocolate is just candy. West Hills foodies and Felony Flats hipsters will tickle your ears about which coffee roaster best expresses the natural flavor of the beans and which brewery highlights the aromas of the hops. But chocolate, which rivals wine in the complexity of its flavor and production, doesn't get the same respect.

That's because most chocolate is the equivalent of Bud Light or Folgers. Industrial chocolate—built on the backs of abusive labor and cheap sugar—is inexpensive, sweet and, frankly, boring.

Craft chocolate, on the other hand, uses beans from small farms and co-ops who are paid above-market rates. Working with small farms leads to a less consistent but more interesting product that highlights regional characteristics of the beans or flavors specific to a cultivar. The casual wine taster knows this as terroir. The casual chocophile doesn't even consider the possibility.

But locally, five bean-to-bar chocolate makers are trying to introduce Portland sweet tooths to rare and ancient varieties of cacao, showing that chocolate is more than just candy. Each of them is putting their passion above a paycheck hoping that you, the consumer, come around and give quality chocolate the recognition it deserves.

Some of these chocolate makers produce only a single bar, while some produce over a dozen. To make things fair and simpler for you, I've only recommended one bar from each company. Nearly all of these compaies have their own retail shop, though, where you can taste their other chocolates. You can also find them at stores such as the Meadow and Cacao; Cacao will even let you taste any bar they stock.

Sebastian Cisneros' interest in chocolate began in his native Ecuador during family trips along roads winding through cocoa plantations. He refined his taste in chocolate working retail and serving customers at Cacao for five years before starting his own confectionary. He began with inclusion bars—chocolate bars that include other ingredients, such as fernet—using high-quality industrial chocolate. But he slowly developed a bean-to-bar chocolate, releasing Cloudforest in 2014.

His inclusion bars, such as the playful Moonwalk with Pop Rocks or the intriguing Gardel with hazelnuts and fernet, always show a deft palate. But his bean-to-bar chocolate shows real craftsmanship. Despite using some of the crudest equipment of any of Portland's makers, he achieves one of the most sophisticated chocolates in both flavor and texture.

Room for improvement: A slightly creamier texture would probably make Cocanú's bar more appealing to the masses, but really it would just be nice to see if Cisneros can maintain the same quality or improve with other beans.

Housed in a 1920s building adorned with Moorish tiles and windows, Creo feels vintage even as it celebrates its one-year anniversary. Former raspberry farmers—son Kevin, dad Tim and mom Janet—produce all of their chocolate in plain sight of the cafegoers sipping on cocoa drinks and nibbling on brownies.

Creo currently works with only one bean, but makes plain chocolate in three different intensities (73, 85 and 100 percent). The company also makes several inclusion bars, including classics like its Minty Dark and Spicy Dark (cinnamon and chile), along with the locally influenced NW Dark Cherry and Hazelnut, among others.

Free tours are available, as are $50 hands-on tours where you can take part in each step of making chocolate.

Room for improvement: If Creo could tame the woody, almost boozy flavors of the Arriba beans, it would allow the floral and fruity flavors to come through and produce a much better chocolate. 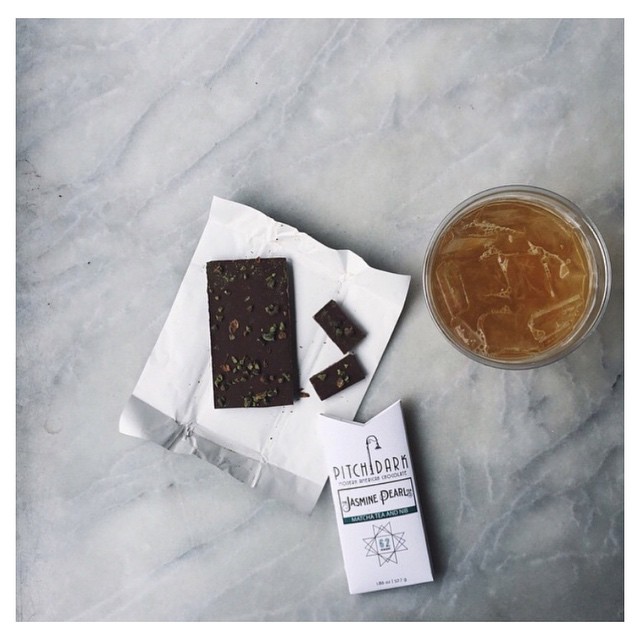 Half of Brian Flick's life has been spent working with chocolate. At 28, that means he's been in the chocolate biz since he was 14. In 2005, when I first interviewed him, he was selling elegantly decorated chocolate truffles under the name Guanaja. His new company, Pitch Dark, still makes truffles, but it also makes a dizzying selection of bean-to-bar chocolates out of a small factory on Northeast Sandy Boulevard.

Pitch Dark makes chocolate from Ecuador, Fiji, Madagascar and Nicaragua. It offers nearly all varieties of cacao beans it buys in 70-percent and 80-percent bars—but also offers Chuno, one of several Nicaraguan varieties, in three different fermentations, showing how changing one step in the processing of the chocolate can entirely transform the flavor. Pitch Dark also has a Jacobsen sea salt and pinot noir bar, drinking chocolate, and even chocolate bitters.

Recommended bar: O'Payo, a blend of Nicaraguan varieties. The 70-percent chocolate has an underlying nuttiness yielding quickly to berries and citrus.

Room for improvement: If Pitch Dark wants to be among the better craft chocolates in Portland or North America, it's going to have to restrain the harsh astringency in some bars and find a way to make the chocolate more creamy than chalky. Tightening the lineup and focusing on perfecting a few bars might be wise.

Future plans: Currently building out a 6,000-square-foot factory with major upgrades in equipment.

Coming from a culinary school and candy-making family, it shouldn't be surprising that George Domurot has gone from mobile app developer to chocolate bar developer. His software development offices are conveniently located behind Ranger's factory. The factory shares a building across from the Burnside Bridgehead along with Trailhead Coffee Roasters and Cup & Bar cafe. The cafe sells Ranger bars and confections, and you can watch chocolate being made through large windows. Tours are also available through the company's website.

Currently, Ranger imports all of its beans from three regions of Peru, making a bar with each: San Martin (70 percent), Tumbes (73 percent) and Chulucanas (80 percent). It does, however, also have a "wild card" bar that changes periodically and can include whatever beans or blend of beans being experimented with at the time. Ranger also makes sauces, candies and even granola using its chocolate.

Recommended bar: Chulucanas using Nacional beans from the Piura region of Peru. The 80-percent chocolate bar has a complex fruitiness—red berries, dried plums, fragrant tropicals—that comes through once you stop expecting it to be sweet.

Room for improvement: A little cocoa butter could make the texture creamier and less fudgy. The San Martin beans used for the 70-percent chocolate have too many off-notes, and even the most experienced chocolate makers have a hard time producing good chocolate with them.

Coming up on six years in business, Woodblock is the granddaddy of Portland's nascent chocolate-making. Its bars can be found at many boutiques and its chocolate is used by local restaurants and shops for products as varied as Salt & Straw ice cream, Stumptown coffee, the Commons' beer and Urban Farmer's desserts.

Woodblock makes an array of single-origin chocolate bars along with a blended "double origin" chocolate bar with a more nostalgic flavor profile. It also has several inclusion bars, such as an uncommon toasted sesame bar and even a dark milk bar.

The "manufactory" in Southeast Portland has a small retail shop, where you can spy the chocolate being made while being bathed in cocoa aroma.

Recommended bar: Madagascar from that country's Sambirano Valley. The 70-percent chocolate tastes tart and fruity, like raspberries with a squeeze of lemon. It's an eye-opener for how different chocolate can be from what you grew up with.

Room for improvement: If Woodblock is going to remain the leader in Portland chocolate-making, it will have to eliminate the chalkiness and astringency from its product. The competition sees Woodblock as a bar to surpass, so it will have to improve just to keep up.

Future plans: Finding bigger space for equipment it has purchased or is custom-building. New confections.