After opening a half-dozen spots over a decade in Portland and the Willamette Valley, Eric Bechard settles in at Albatross.

Eric Bechard has spent most of his life on the move. By the time he graduated from high school, he'd lived in 12 different states—moving every time his father, who worked in civil construction, took up a new project.

As a chef, Bechard has had a hard time sitting still. Since he moved to Oregon in 2002, Bechard has opened a half-dozen restaurants, including an oyster bar, a late-night taqueria, an Ivy League-themed sports bar, a wine country bistro, and a short-lived wild game spot called Kingdom of Roosevelt that's arguably the oddest culinary experiment Portland has yet seen.

Kingdom of Roosevelt—dishes included "fallow deer heart tartare with his marrow" and "wood pigeon liver custard with elderflower and pickled huckleberries"—closed abruptly in spring 2013 after only six months in business. Bechard skipped town, refusing all requests for comment and selling the space to a server, who turned it into a brunch spot. Rumors swirled—as they tend to do around a heavily tattooed wunderkind once arrested for fighting outside a strip club over the use of an out-of-state pig in a cooking competition.

"I didn't tell anybody what I was doing," he says. "It was like, leave in the middle of the night, change the business, just come out here and get to work."

"Here" is Astoria, where Bechard resurfaced with a tavern called Albatross. For its first two years, Albatross was a narrow brick slot serving very fine cocktails next to a decadent bistro burger and six types of oyster fresh off the boat. In March, Albatross expanded into an airy space with cushy banquettes, dramatically expanding its menu to include rabbit terrine, Parisian gnocchi and dry-aged steak served with creamed kale and potatoes cooked in duck fat.

After decades in motion, Bechard is putting down roots.

"I came to Astoria within the first three or four weeks of moving to Portland—for whatever reason, I just hopped in the car, got on [Highway] 30 and drove out," he says. "I immediately fell in love with the region. I'd been spending a ton of time out here pretty regularly from 2002 until I moved out here. I think I'd been subconsciously looking for a way to get out here."

In Astoria, Bechard sees the same thing a lot of Portlanders do—a river city in our own image, but with an ocean in sight. It's a little rugged, still full of fishermen who risk their lives crossing the bar and buy a round when they hit a bonanza of albacore. But it's also quickly growing into the Northwest's most cosmopolitan coastal city, with a hip hotel, unique record shops and very good food.

Related: What I Learned When I Left Portland and Moved to Astoria

"You come to Astoria and you say, 'This is a really cool town.' It feels authentic," he says. "The people here feel like they're not trying to be a thing. There's no storefronts full of tchotchke bullshit, spray-painted T-shirts, that stuff. The city is working hard, trying to develop itself authentically and organically as opposed to trying to invent something to draw people to it."

And that's just downtown—which Bechard describes as the boring part compared to dirt-biking around logging roads or fishing for salmon. 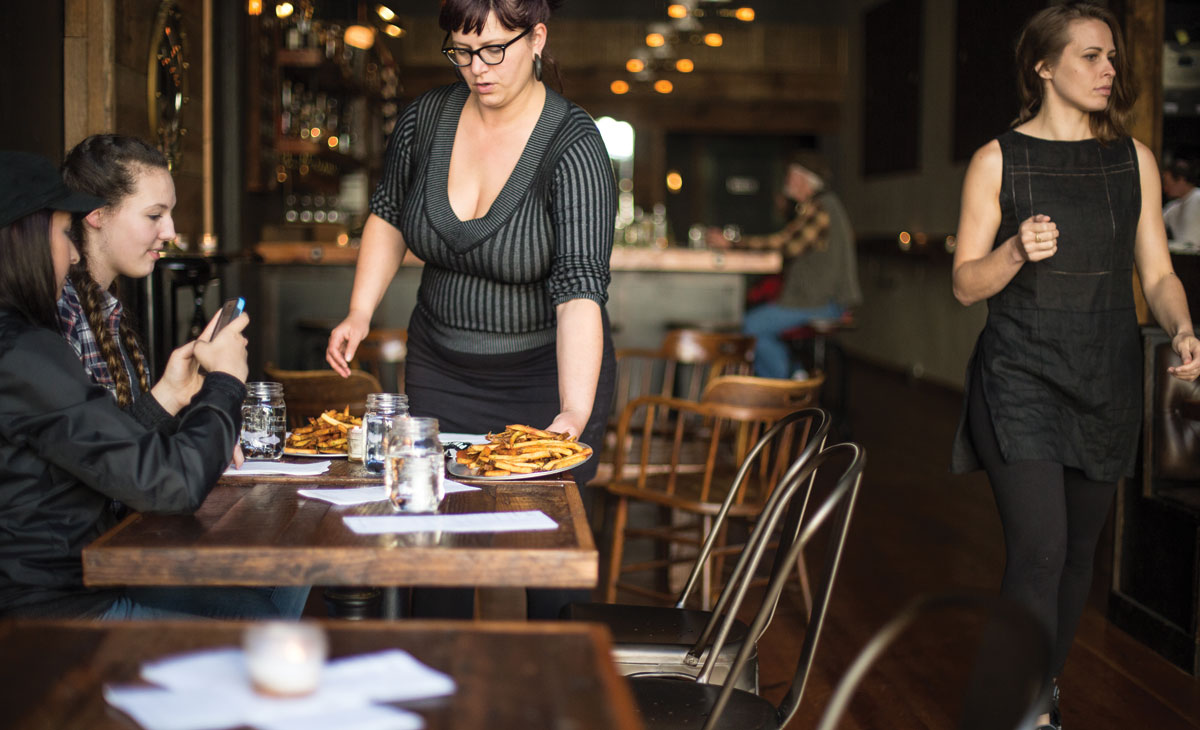 "I always tell people downtown is the icing on the cake, it's not the cake. The cake is the surrounding area—it's the river, it's the ocean, it's the mountain ranges, it's hiking, fishing, foraging, going up on the peninsula," he says. "If you moved here because you think downtown Astoria is awesome, it'd probably get old pretty fast."

Related: Where to Eat on the Oregon Coast

For some people, it does get old—which is part of the magic. While Astoria has seen an influx of California money in recent years, it's a little too rugged for people who grew up with sunshine in their hair and a surfboard strapped to their Jeep. The beach is a 15-minute drive, and there are only 10,000 people in town, which means every bar is Cheers.

"It can be rainy and shitty and dark and spooky," he says. "Half the beauty is the shitty aspects—when it's dumping rain and you can bounce around to 32 places that serve alcohol from the Portway to the Desdemona, which is less than 2 miles. And these are real dive bars. Not, like, Club 21 and Sandy Hut. They're filled with blue-collar fucks, and awesome."

Though he's been wildly successful as a restaurateur, Bechard says he'd be just as happy as a motorcycle mechanic or a designer—so long as he could do it in Astoria.

"I've lived in a lot of great spots. Portland's an amazing place, and McMinnville is an amazing place, but for me in particular, there's just something right about living here. I really dig it—the people, the history, the vibe," he says. "It's the end of the world. The river's dumping out here, and the ocean's hitting here, there's no more land—it's just kinda coming to an end."