How Does Popeyes’ Viral Chicken Sandwich Compare to the Portland-Made Versions?

We spent a week sampling sandos at popular mainstays and newcomers alike to get a more accurate gauge on the hype.

Unless you're a vegan living under a rock made of cauliflower, you've probably heard a story or two about the hysteria surrounding the new chicken sandwich at Popeyes.

Initially released in August, the sandwich was an instant hit, to put it lightly. Traffic jams caused by rabid regulars and line-obsessed hypebeasts led to frazzled employees, fistfights and abrupt shortages. Atlanta rapper Quavo posted a joke on Instagram about flipping the sandwich for $1,000, and others actually followed his lead. It came to a head when a Tennessee man filed a lawsuit against Popeyes for the time he wasted driving from one shorthanded store to the next, "consumed" by the thought of the sandwich. And then they ran out completely.

The sandwich was reintroduced in early November, with the franchise presumably taking the month-and-a-half break to better prepare for the onslaught. If all the insanity kept you away the first time, well, we don't blame you. But we'd be lying if we said the sandwich wasn't worth getting into at least a minor brawl over.

Of course, Portland has no shortage of acclaimed chicken sandwiches, which you might (read: definitely) pay more for, but won't have to literally fight through a teeming crowd to get your hands on. (Fried chicken, in general, is on the verge of becoming Portland's next big food trend: Micah Camden's new spot, Bae's, just opened downtown, and Doug Adams' Holler is coming in 2020.) So, all things considered, how does Popeyes stack up?

We spent a week sampling sandos at popular mainstays and newcomers alike to get a more accurate gauge on the hype, and our conclusion should be no surprise—it is well deserved. Below, we've ranked the sandwiches we feel are better than Popeyes' and those that are worse. But first, for context, here's how we felt about the sandwich in question:

This sandwich really is a work of art. The bun is golden and pillowy,
the pickles punctuate each bite with a juicy tang, and the chicken itself is
a middle finger raised in defiance to nature and decency. No fast food
sandwich should be this good, and we're still not entirely convinced this level of taste and consistency is tenable. Be warned that you may turn to your own back-alley dealings to cop one when they become more scarce, which will still be totally worth it.

Situated in a pod behind a strip club on Southeast Powell, this periwinkle-blue food truck is a throwback to the good old days when food trucks were underpriced and hard to find. In this case, $10 is a steal, given both the quality and size of the hot and juicy thigh meat that adorns Jojo's flagship item. The kicker is the perfect pile of slaw and jojo sauce—a Duke's mayo and Heinz ketchup hybrid—to lube the thing up properly without collapsing the bread after two bites. You can count on eating this in your car without making a huge mess. Jojo, 3582 SE Powell Blvd., 503-309-4768, jojopdx.com.

Many believe this spot, inside the Zipper on Northeast Sandy Boulevard, makes the best chicken sandwich in town. With its endless supply of crusty bits that surround meat so hot and tender the first bite can blow steam in your face, the rep is well earned. The only downside is that it's comically oversized and almost impossible to eat without a fork and knife, which isn't much of a downside at all. Basilisk, 820 NE 27th Ave., 503-234-7151, basiliskpdx.com.

The McIsley at Pine State Biscuits ($9)

We can't forsake one of Portland's true OGs in the realm of bulbous breasts and Southern-inspired buns. In this case, it's a pair of buttery biscuits, mustard and local honey surrounding what is easily the largest piece of chicken in the game, at least locally. Acquiring this sandwich is often a pain in the ass, and eating it is work, but respect is due nonetheless. If you've been up all night partying and need a coma-inducing pile of starch and salt, Pine State Biscuits delivers every time. See pinestatebiscuits.com for locations. 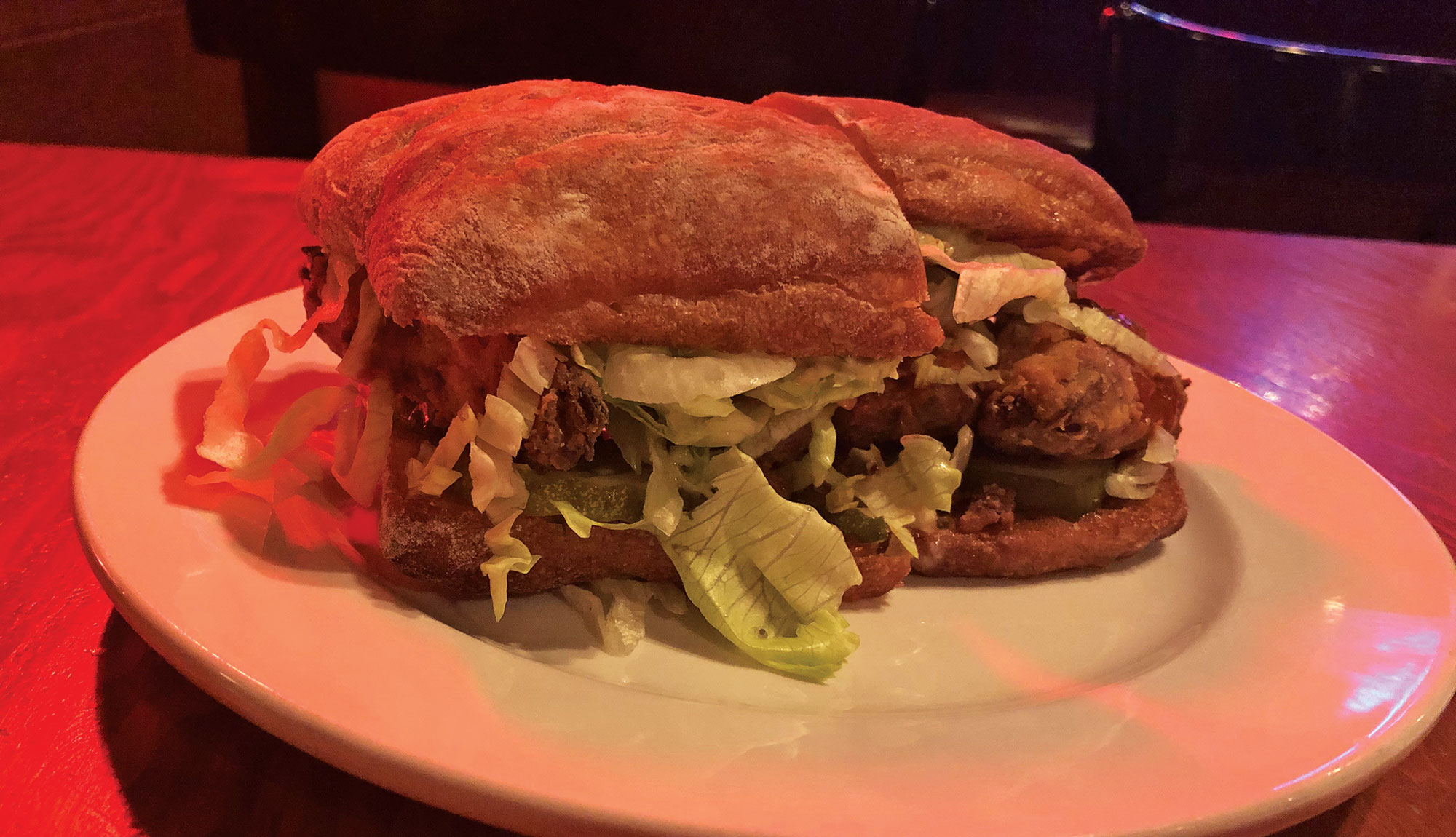 No one cried when the Bunk Bar location under the Wonder Ballroom changed hands last month—the manager of the location bought it from the owners of the Portland sandwich franchise, amounting to a mostly seamless transition. The chicken sandwich that intermittently graced the Bunk menu is now a permanent staple. It's a sloppy, messy pile of drippy honey sauce and juicy smoked chicken, but the flavor of the bird itself is nothing to write home about unless your ears are ringing and your head is spinning from a show upstairs. Cliff's PDX, 128 NE Russell St., 503-327-8234.

The Freebird—the basic chicken sandwich at the brick-and-mortar adaptation of Maya Lovelace's popular fried chicken pop-up—is an off-menu item you have to ask for by name. With an understated mix of bread-and-butter pickles, Duke's mayo and American cheese between a buttermilk bun, the chicken is the least-interesting component of the whole thing. You could upgrade to the Intimidator for another $5. You're far better off skipping the bread and sinking your teeth into an unadorned breast "dusted" with Lovelace's signature dry-spice blend. Yonder, 4636 NE 42nd Ave Suite A, 503-444-7947, yonderpdx.com.

This scary clown-themed hang in inner Buckman has the feel of a place that serves food only because it has to, but its owners have an understated pride in what they do. Both the spice and crisp levels are present but no shock to the system, which is just fine when you're glued to the barstool and too embarrassed to ask Postmates to bring some Wendy's to the alley out back. The flavor and texture aren't a whole lot different, but everyone should know by now that Wendy's spicy chicken sandwich is actually pretty legit—this is only slightly better. Creepy's, 627 SE Morrison St., 503-889-0185, creepys.business.site.