Burger Madness is a seeded tournament pitting 64 Portland patties against each other. Our critics ate through the best Bistro Burgers, Bar Burgers, and Brewery Burgers and Burger Burgers  in Portland—and will reveal their picks round by round until the best burger in Portland is crowned.

This week, we're revealing the winners in the round of 32. Here are the bistro burgers.

And here are all the Burger Madness Round 64 Results.

Beard-award-winning chef Gabe Rucker's trademark burger is messy. It is also legend. It's been listed among the best burgers in America by national food media and among the "12 Wonders of Portland Food" by WW. So it's an easy pick for the top seed.  The juicy grilled patty, ground in-house daily, is topped with melted aged white cheddar, twice-grilled pickled red onions, and an iceberg slaw. The ciabatta bun takes razor-sharp teeth to make sure the whole thing doesn't end up in your lap, but a Franz bun would dissolve on contact with this delicious monstrosity. A little horseradish in the mustard on the bun makes sure your olfactory is clear to enjoy such a well-crafted sandwich. 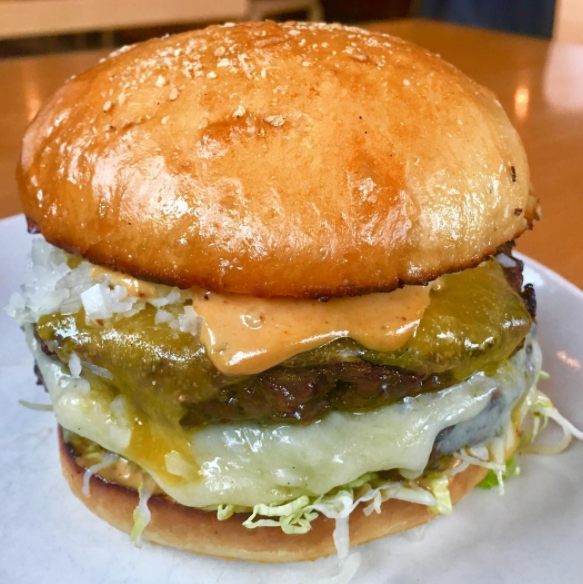 Before co-founding Ox steakhouse, Greg Denton cooked up the juicy burger at the now-closed Metrovino, which I judged the best in town for BurgerQuest 2010. At the Dentons' new small-plate spot, SuperBite, the burger ($16 with steak fries) is no mere bite. It's two mostly beef patties, special sauce, lettuce, cheese, pickles, onions and a sesame seed bun—a gourmet Big Mac. But while the shiitake mushroom ground into the burger adds interesting umami, it comes at the cost of juicy meat. Still, the generous and perfectly melted mix of cheddar and fontina cheese balance out beautifully against tangy special sauce and tart pickle.

WINNER: Superbite. An upset, and a major one. Le Pigeon may have been named one of the 12 Wonders of Portland Food by WW, but here's another, apparently. SuperBite's burger is the follow-up to the Metrovino burger that won Nick Zukin's Burgerquest in 2010, and it is also victorious here.

La Moule's single, well-seasoned patty sits on a soft, plump Ken's Artisan bun toasted sufficiently to keep the sandwich together. Two wedges of buttery brie, still creamy even when cooled, join two long slices of Niman Ranch bacon extending from the bun like wings. The burger comes with an unlikely balance of pickled and raw red onions, plus a slather of bracing Dijon to bring out subtleties of the beef and brie.

If serial restaurateur John Gorham is the Rick Pitino of Portland burgers, Toro Bravo is still his Kentucky Wildcats. The secret to the burger at Toro Bravo ($14) is housemade romesco, the special sauce of Catalonia in northeastern Spain. Alongside bread-and-butter zucchini pickles, that creamy housemade blend of garlic, nut, and roasted red pepper acts as counterpoint to the deep salt and richness of the 6-ounce, grill-caramelized Cascade Natural beef, pungent manchego and housemade bacon.

WINNER: Toro Bravo. It's Dijon vs romesco—and romesco wins in a near even-seeded matchup. Gorham advances over Barnett.

Burgers at most of Portland's best steakhouses offer as much excitement as a deflated basketball. But the balance of flavors is what lets the Laurelhurst burger ($15 with fries) at nontraditional steakhouse Laurelhurst Market compete with the best in the city. Tart balsamic onions and house pickles harmonize with the salty-sweet umami hit of bacon and Tillamook aged cheddar cheese. The squishy Fleur de Lis potato bun is grilled thoroughly, making it hold up until the finish. But while the beef is hearty as bison meat—nicely charred yet still juicy—the burger was a little undercooked, and a little short on the housemade herb aioli.

Vitaly Paley's burger is at Paley's original Slabtown restaurant—home to one of Portland's very first brioche-bun, house-ground bistro burgers when it was introduced at the turn of the millennium. The grilled onion on the Paley's burger ($15 with fries) is revelatory, a full slab of onion grilled on both sides until caramelized, with an almost translucent and buttery interior. Creamy and bright notes come from mustard aioli and ketchup. But on a recent visit, the patty was undercooked enough it resembled tartare, and the bacon add-on ($1) was hammy and chewy.

WINNER: Laurelhurst Market, in yet another upset! The Paley's came in undercooked, and this is enough to notch it below what now ranks as Portland's best steakhouse burger—balanced and meaty at once.

For more than a decade, Cafe Castagna's burger  ($13 with fries) has been famous for hitting the fundamentals and for those still-unbeatable bread-and-butter zucchini pickles. The burger arrives naked and cooked precisely to spec, on a slightly sweet, plain brioche from Ken's Artisan. All toppings are placed on the side, including pristine butter lettuce, onion, tomato (in season) and those great pickles. For $2 each, you can add bacon, sherry-grilled onions and cheese—cheddar, swiss or blue—or add nothing at all.

AtKen Forkish's most upscale restaurant, the most casual entree is still its best dish. The pimento burger ($15 with fries) couldn't be simpler: Meat, cheese and bread. It's two Cascade Natural beef patties, a housemade brioche bun, pimento cheese, and a special sauce of aioli, ketchup and fermented dill. That's it. Melty pimento cheese is a brilliant burger topping, almost like cheese and fry sauce in one. You almost can't screw it up, and yet two other burgers considered for this list managed to do so.

WINNER: Cafe Castagna, an upset only in a name—as it was likely seeded a little too low by the organizers. The classic zuke-pickle burger retains all its former majesty, and knocks out the Trifecta burger heavily favored by the food editors of this paper. San Francisco beats mid-Atlantic pimento in a rout.

Here's Where You Can Fill Out Your Burger Madness Bracket

The 16 Best Brewery Burgers in Portland

The 16 Best Classic Burgers in Portland

The 16 Best Bar Burgers in Portland

The 16 Best Bistro Burgers in Portland

Burger Madness Round of 32