What is the best Air Jordan of all time?

Earlier this month, Nike announced the 30th rendition of the Air Jordan sneaker, an enduring icon of streetwear that played a major role in turning sports shoes from purely functional to a fashion statement.

Michael Jordan's collaborations with legendary sneaker designer Tinker Hatfield and others have produced some of the most beloved sneaker designs on the market. However, the Jordan brand has its fair share of stylistic misfires, gaudy gimmicks and overrated designs that are better loved than they should be. To celebrate Air Jordan 30 and 30 years of Air Jordans, we slightly iconoclastically ranked every pair from worst to best.

Michael Jordan is notorious for suffering from textbook nouveau riche taste, and his love for Italian leather and sports cars often got the best of him and his shoes, especially in the early 2000s. The results are some of the tackiest and shoddily constructed shoes in the Jordan brand. 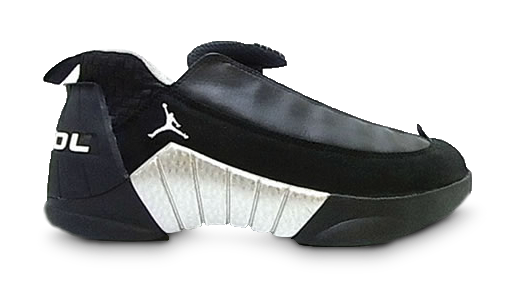 The bizarre, vagina-esque sock isn't the worst thing about the 15s: They were also notoriously uncomfortable and poorly constructed. 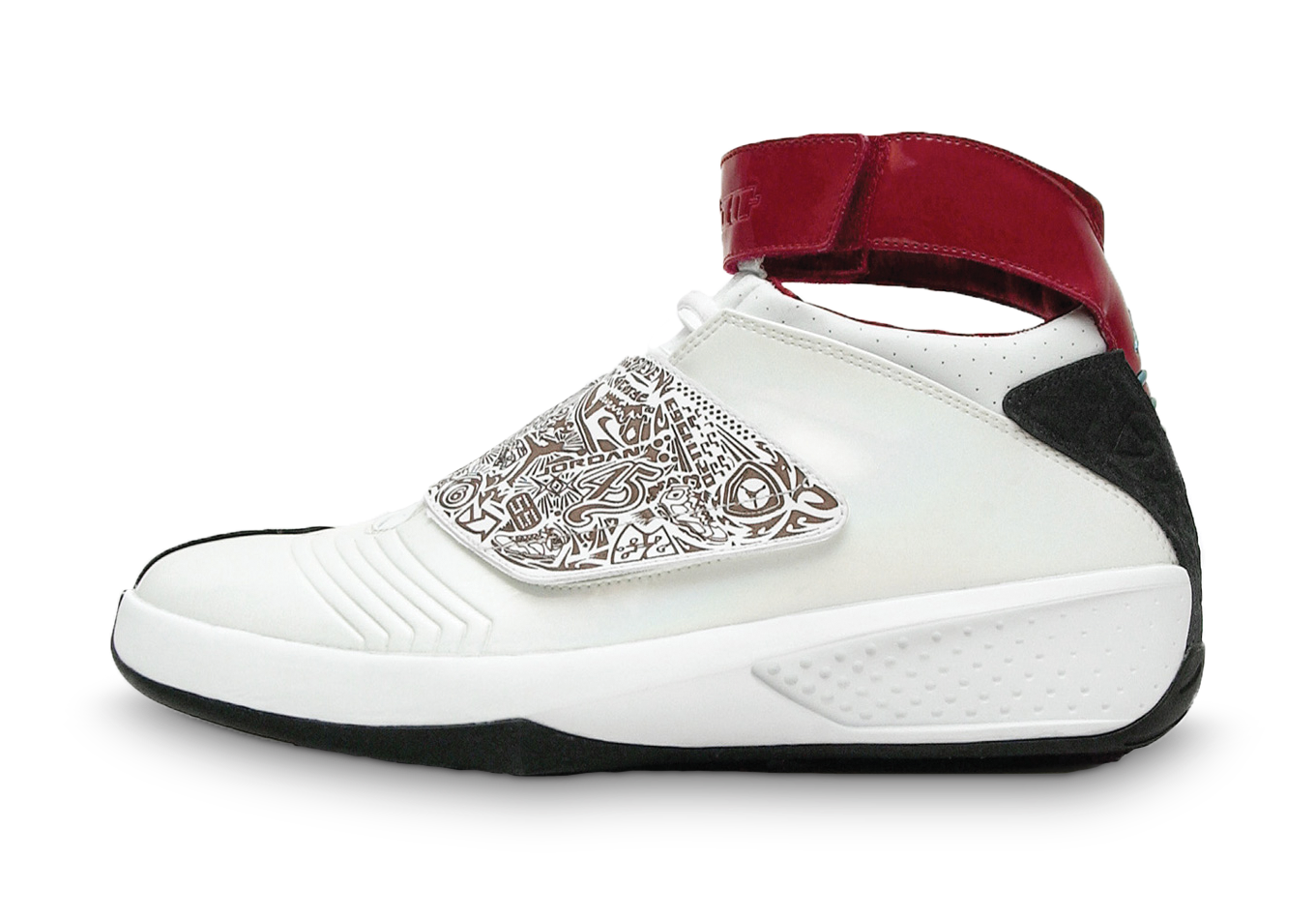 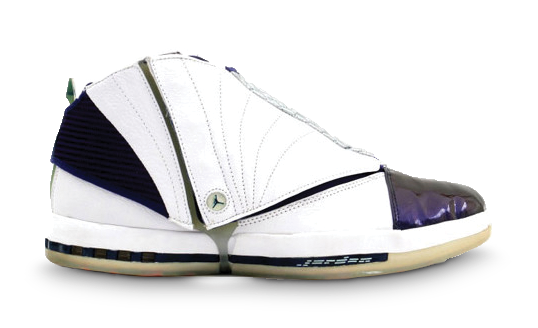 The 16s' blocky upper makes them look like a horse's head. It doesn't help that the patent-leather toe frequently creased and cracked, and that the lace shroud was infamous for falling off during play. 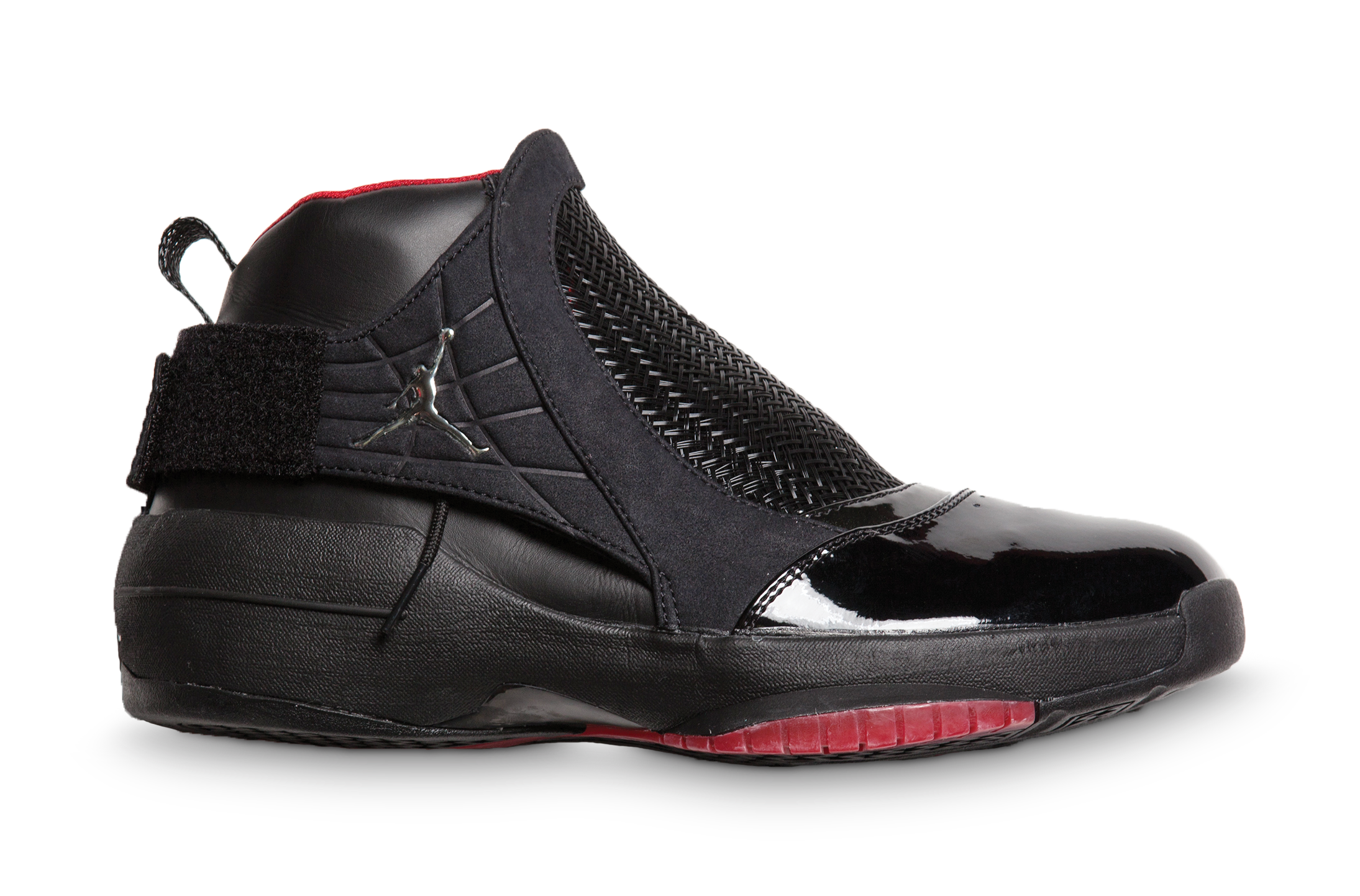 The shiny material used on the toe and the mesh lace-replacement make the 19s one of the coolest pairs of Crocs on the market. 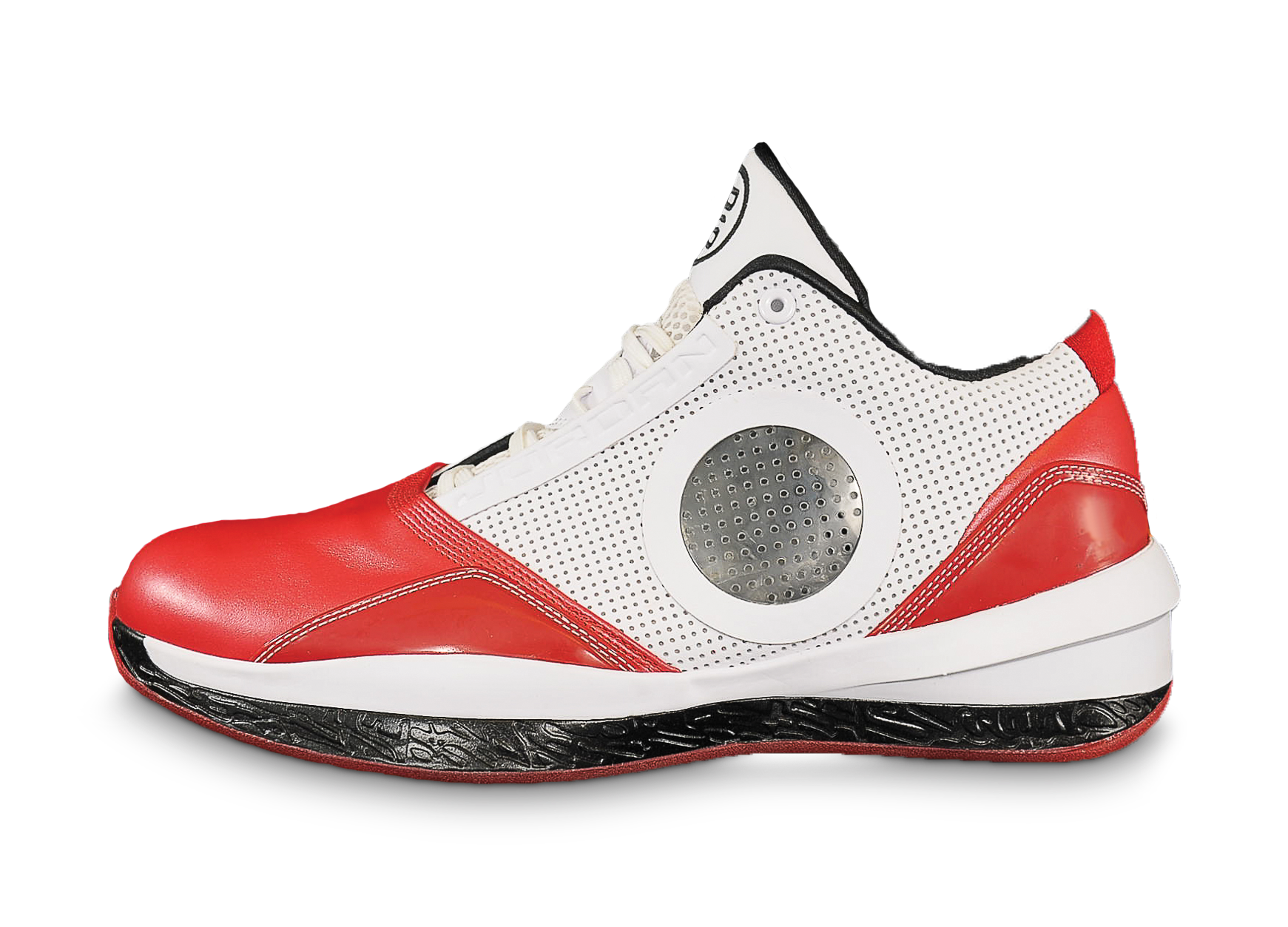 The transparent plastic window on the side of the 2010s helps potential purchasers "see through" clumsily executed gimmicks that ruin otherwise decent sneakers. 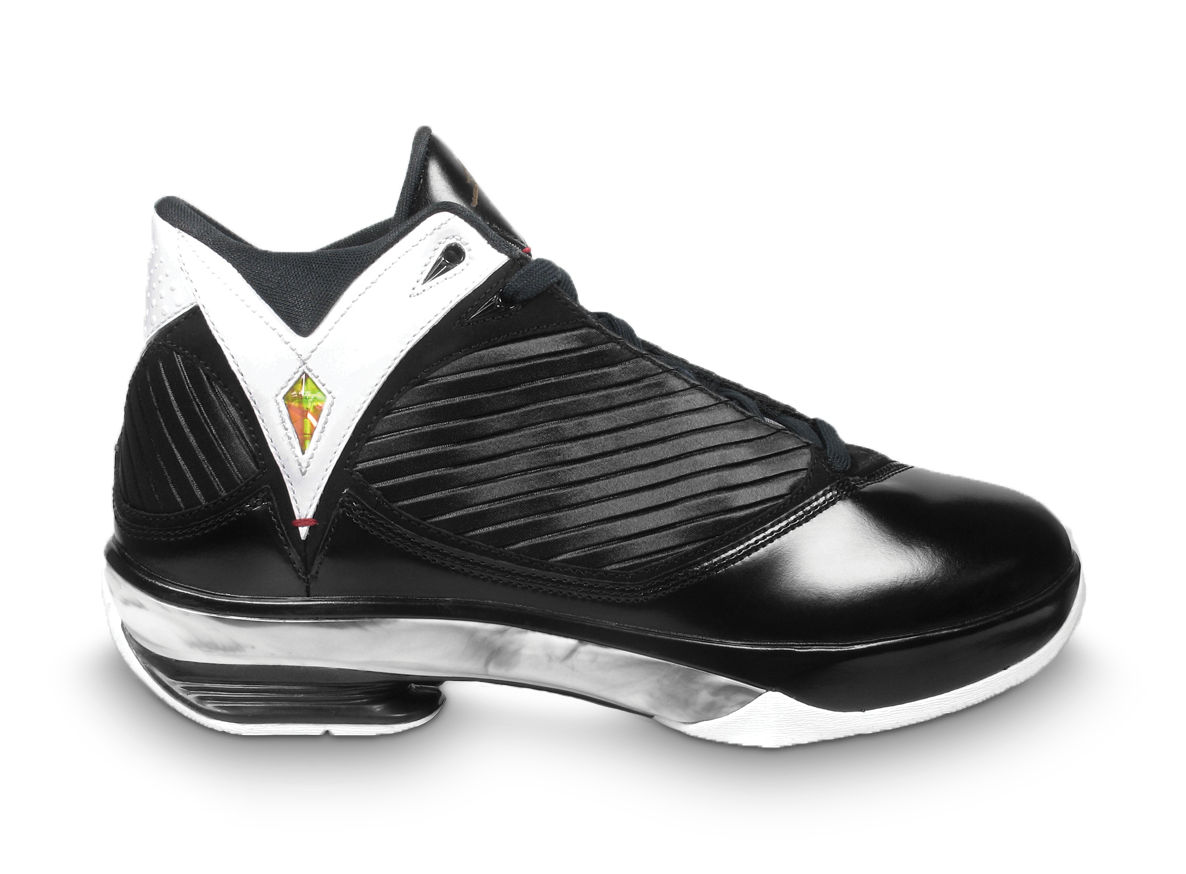 The first of four years of Jordans named after the year they were released, the 2009s are inoffensively dull enough to look like you can buy them at Payless.

Although we are out of the danger zone, the next six shoes suffer from chronically uninspired design. 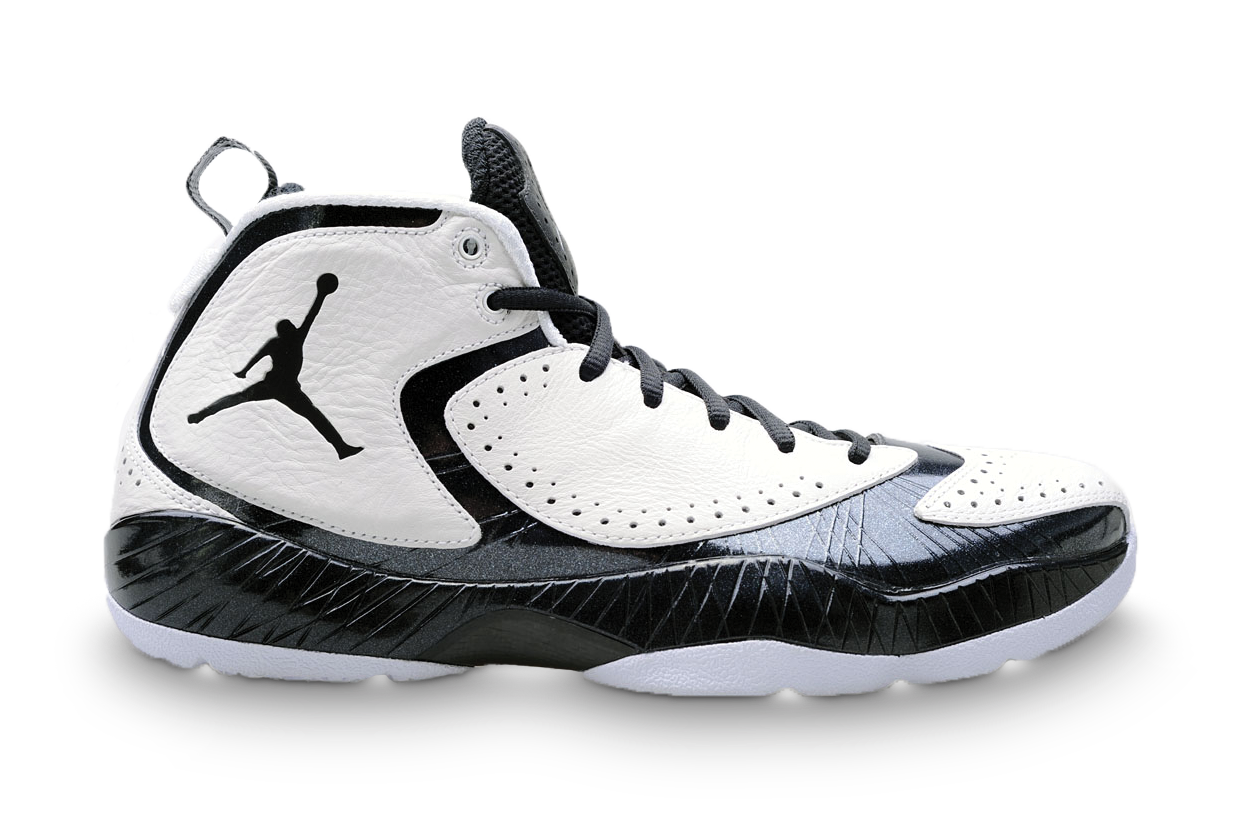 A shoe so bland it looks like a knockoff of itself. 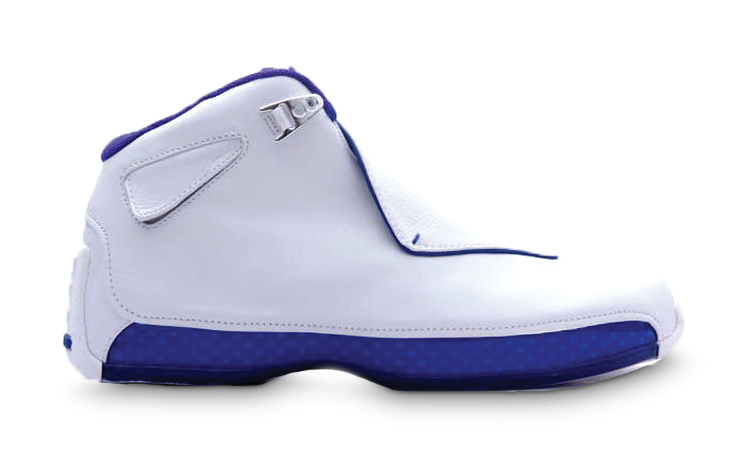 The smoothed leather shroud upper and studded rubber heel make for an aggressive clash that has the 18s looking like cheap leather boots. 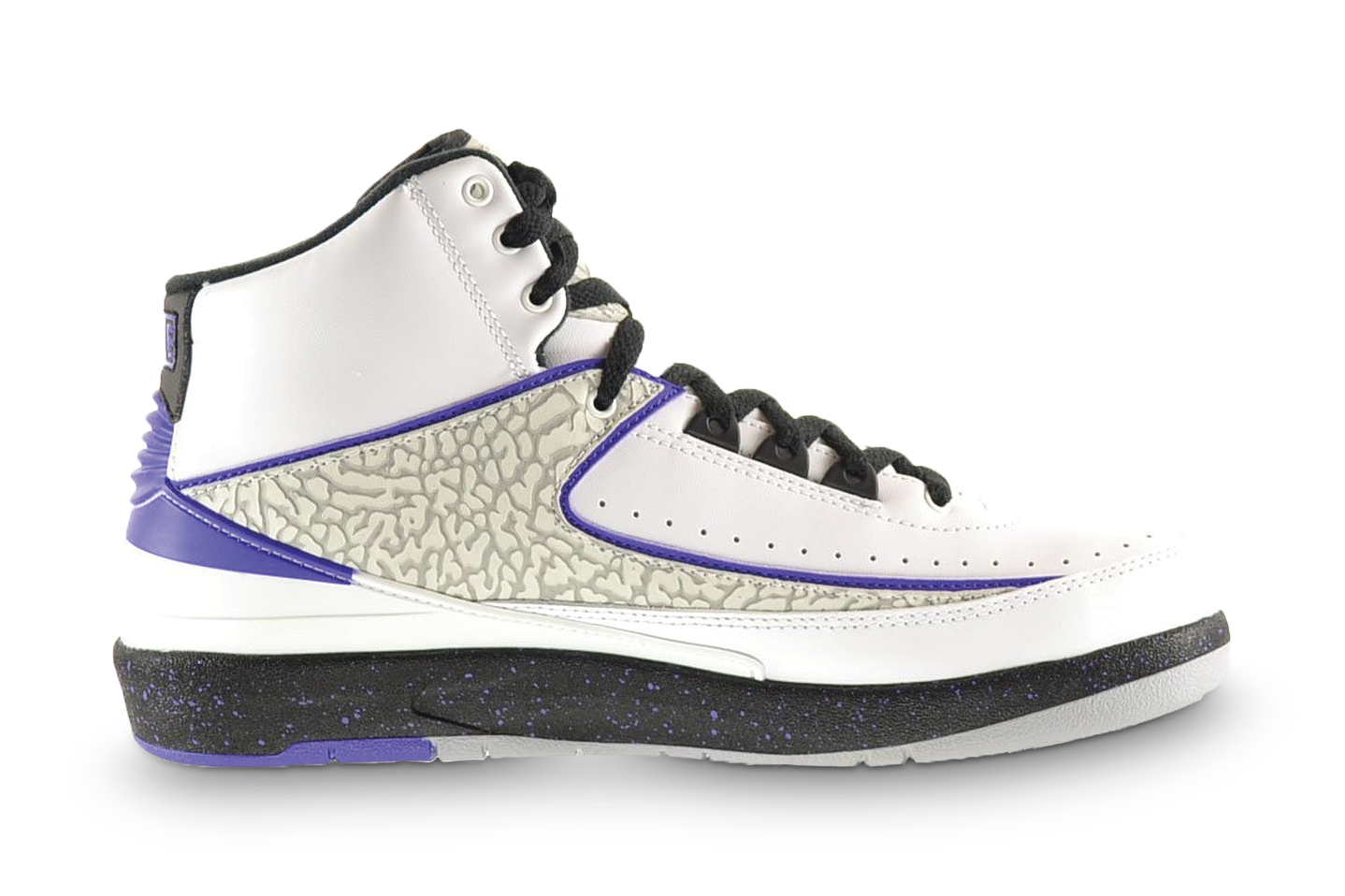 The underachieving younger brother of the original Air Jordan, the 2s are flabby, boring sneakers that are among the most chronically overrated in the Jordan line. 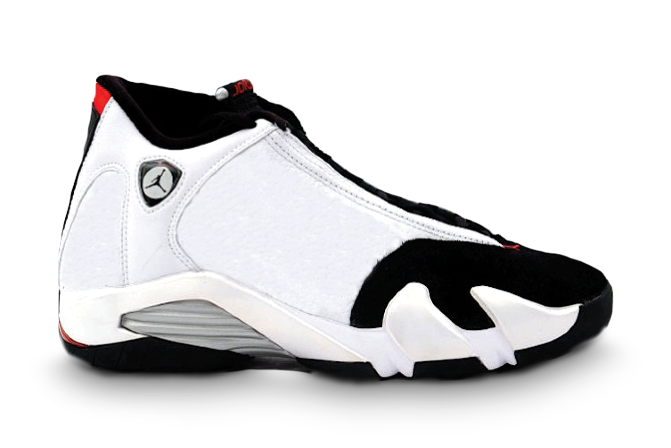 The otherwise sleek 14s are marred by a Jumpman stylized to look like the Ferrari logo, the most wince-inducingly gaudy feature in the Air Jordan line. 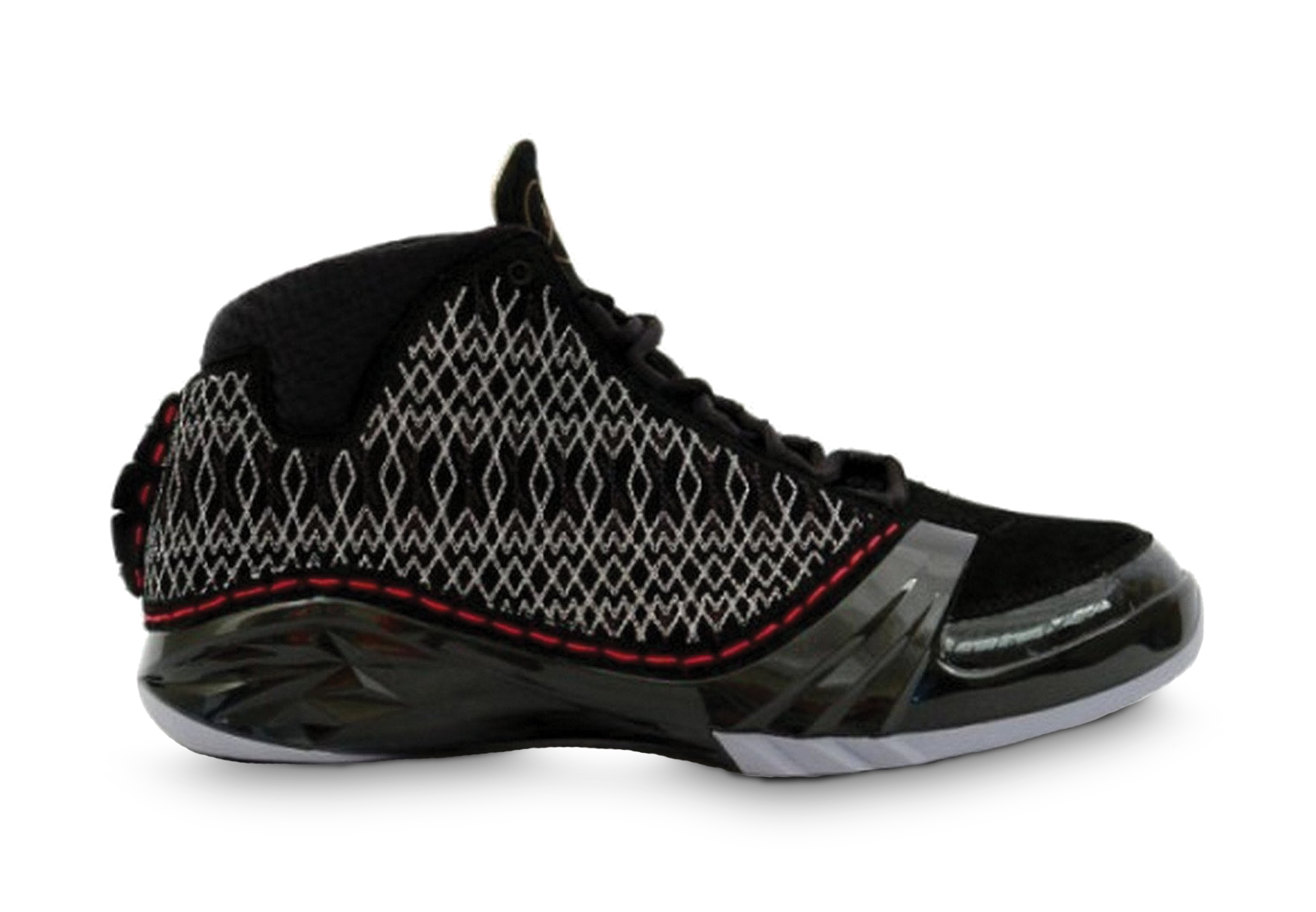 The 23s get points for the hand-stitched exterior, but this otherwise uninspired shoe lacks the pizazz that sets the best Jordans apart. 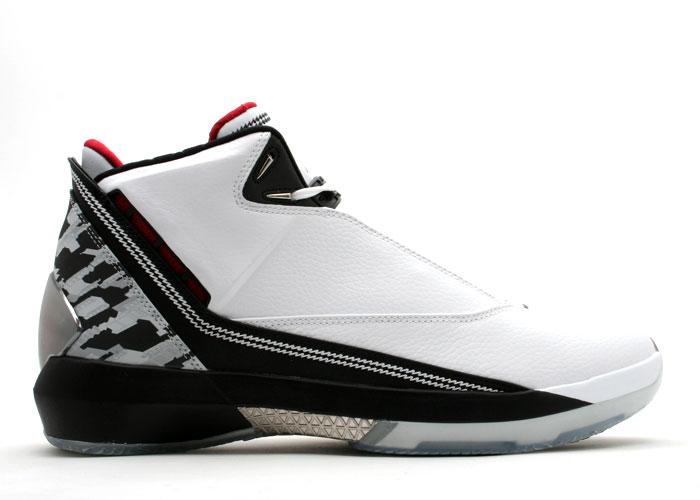 Although still comparatively plain, the 22s are the most exciting of the mid- to late-2000s Jordans, with an angular approach to detail that sets off the leather upper nicely without clashing.

Many of the middle of the pack are good but flawed sneakers, or less well-executed incarnations of the best of the best. 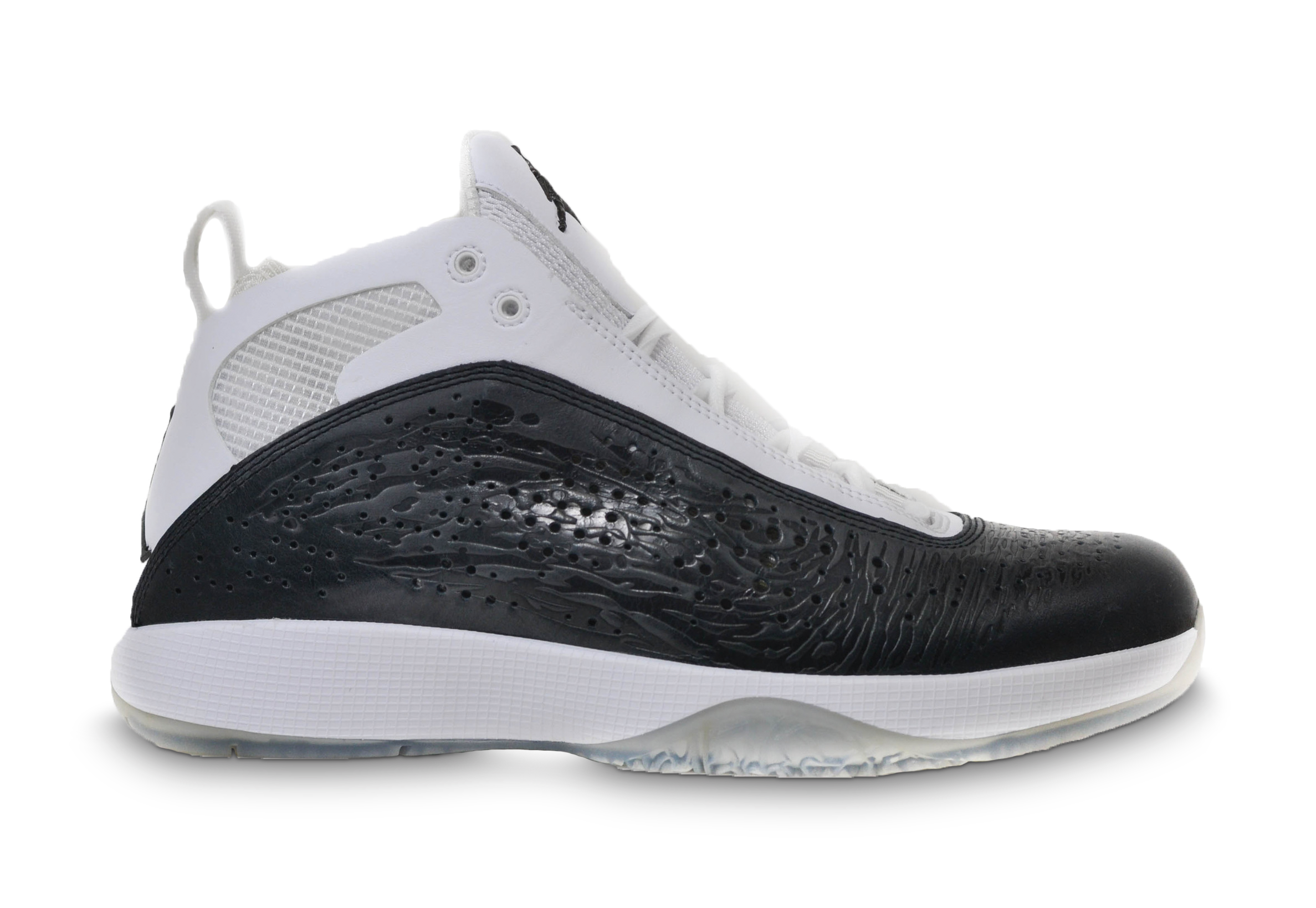 The burnished leather upper should look cool in theory, but a boring collection of colorways and lack of flourish let the 2011s down. 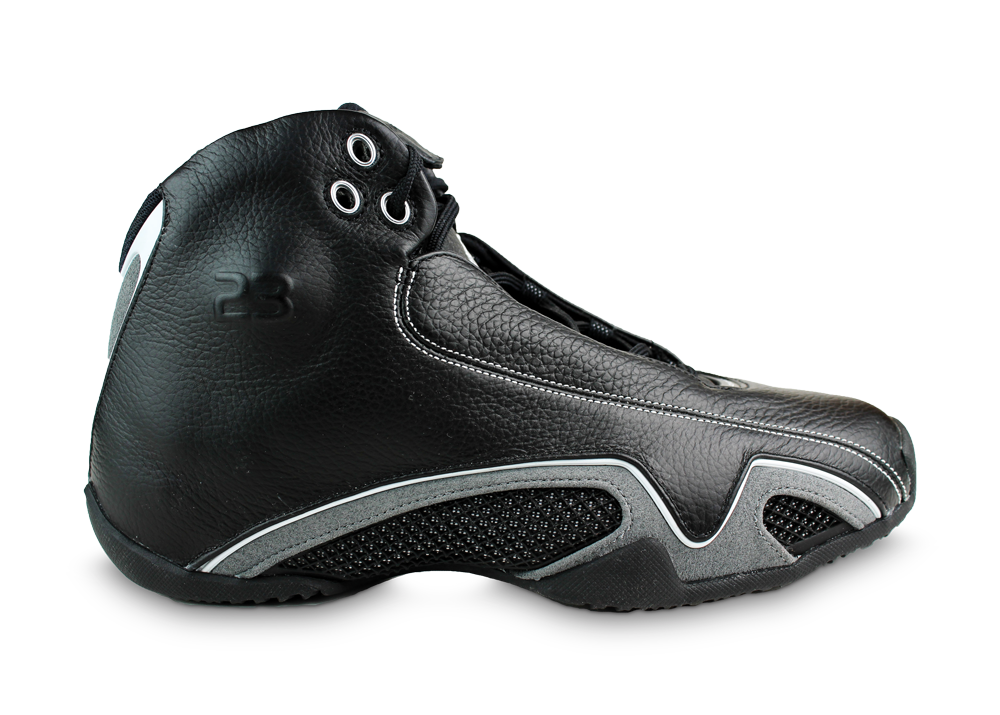 Not without their garish charm, the suede 21s echo Steve Harvey's outlandish style, but a suede basketball shoe is nonetheless intrinsically ridiculous. 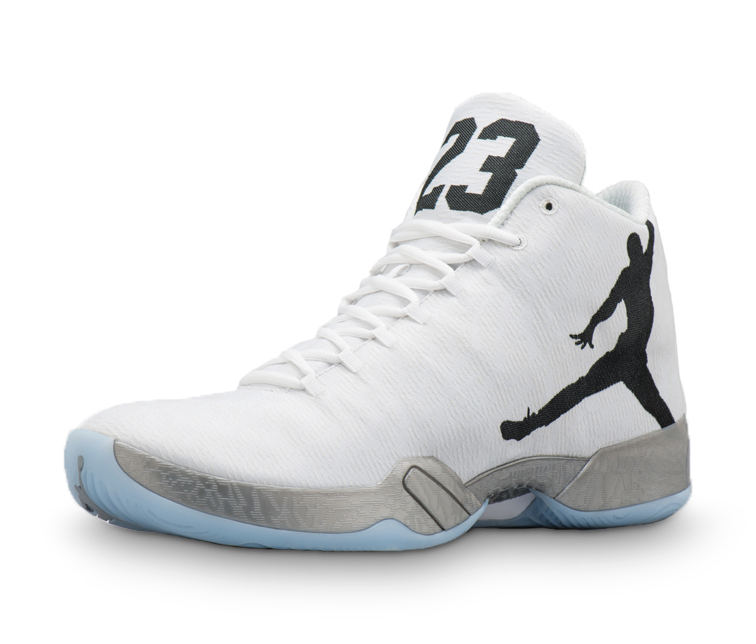 The sleek and modern 29s certainly look like a modern sneaker, but the gigantic Jumpman on the exterior makes them less pretty than other modern Jordans. 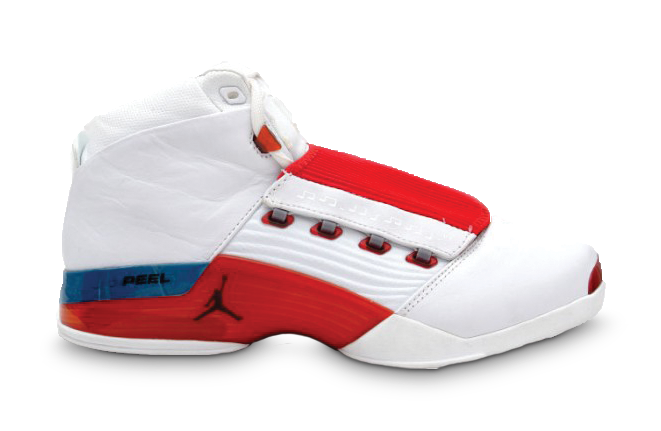 Although the lace shroud looks a little chunky today, the 17s' sleek lines and subtle details make them the best of an otherwise dark era. 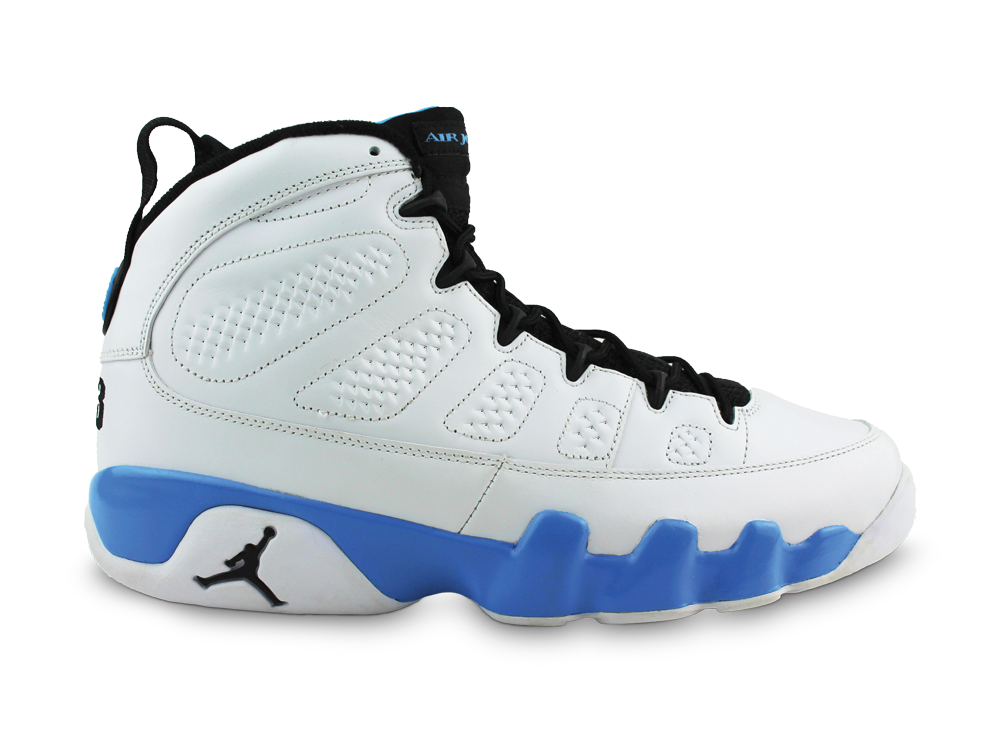 The block-coloring on the 9s' nubuck accents unfortunately let some colorways down, making many pairs of this otherwise excellent, restrained shoe resemble hiking boots. 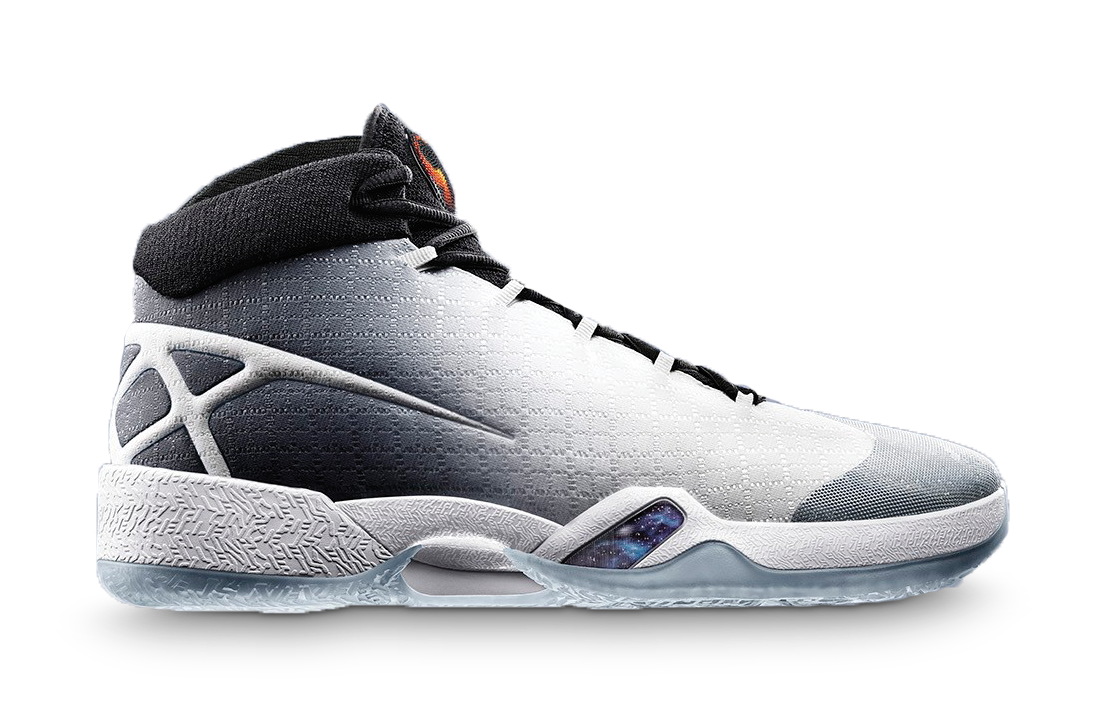 Modern and airy with a nice collection of details less intrusive than the 29s, the 30s bring out the best of modern sneaker design without overdoing it.

The only thing holding back these six shoes is that other Jordans happened to be more classic. 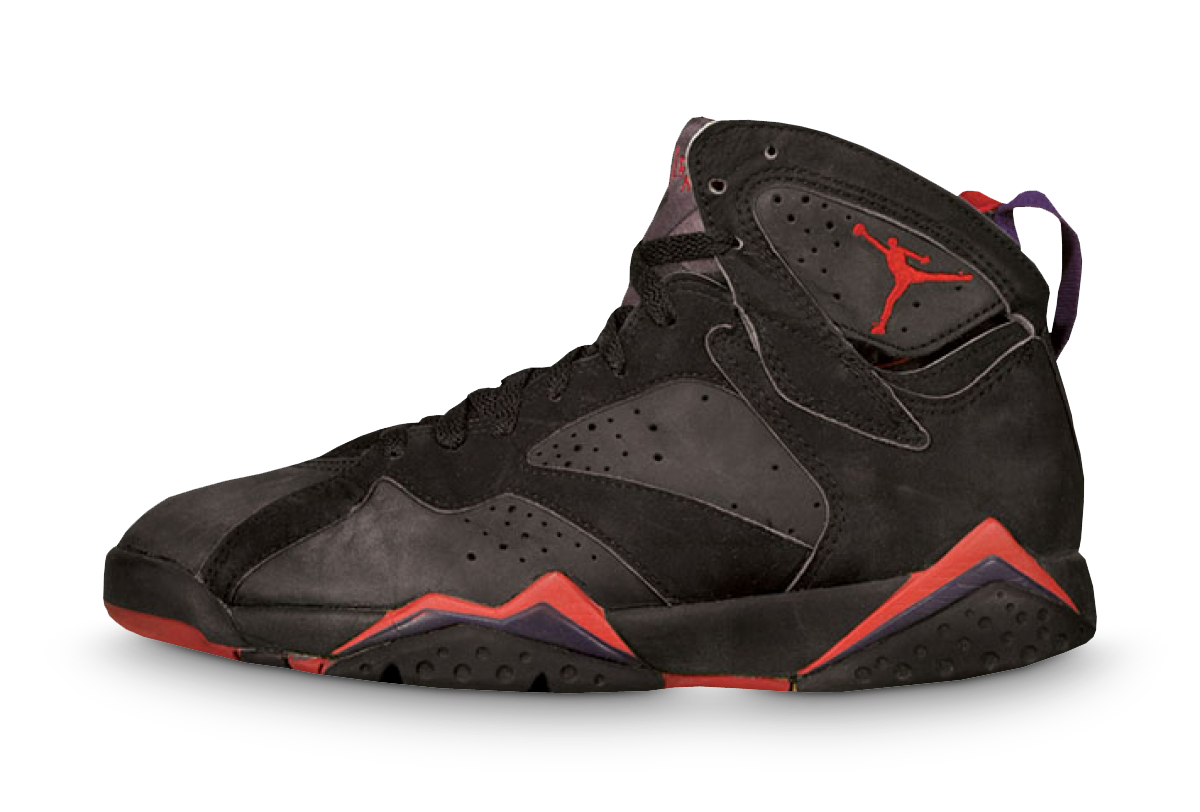 The 7s' detail-heavy angularity and curves make them festively loud and one of the best Jordans suited for expressive colorways. 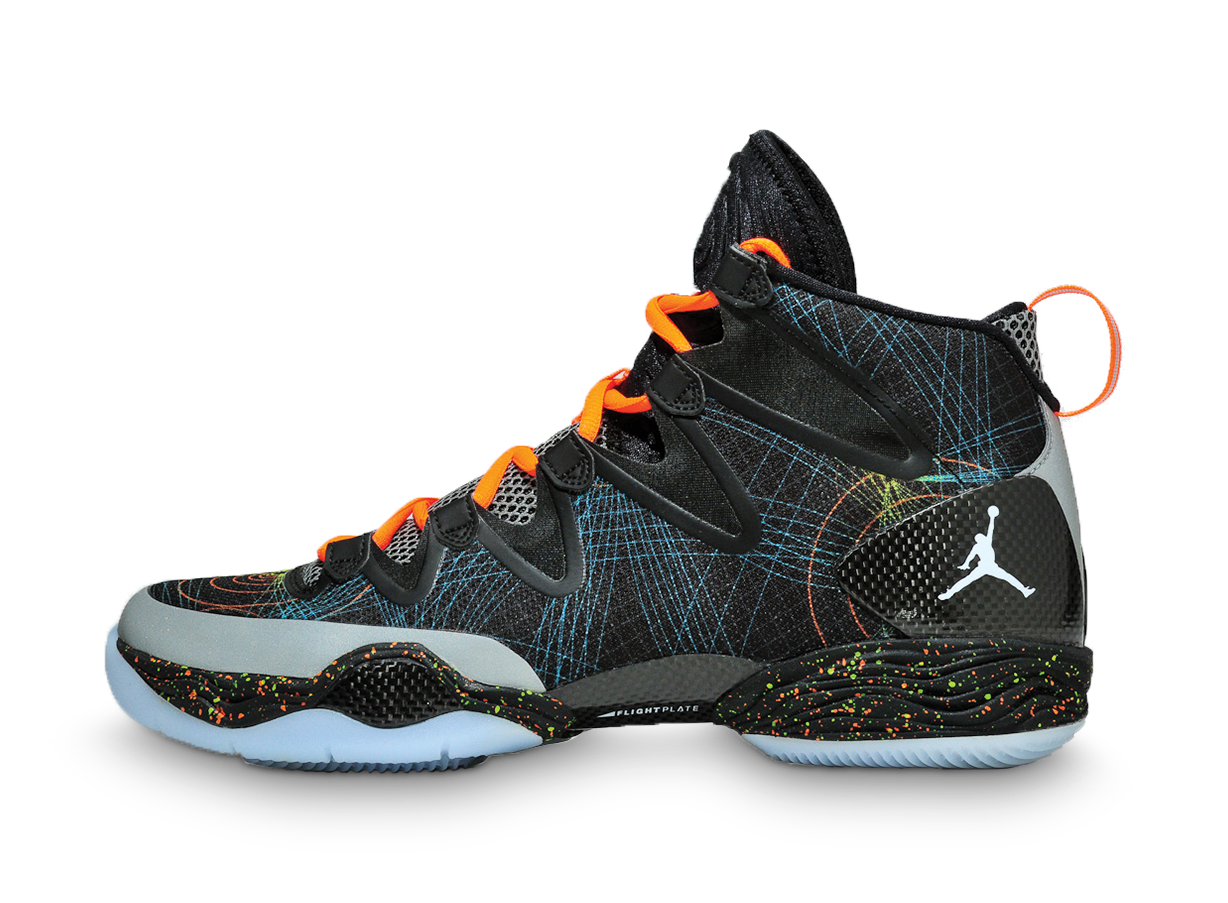 A rebirth in modernity after the mostly leather-bound years of the late 2000s and early 2010s, the 28s are striking, support several excellent colorways and paved the way for a new generation of sleeker Jordans. 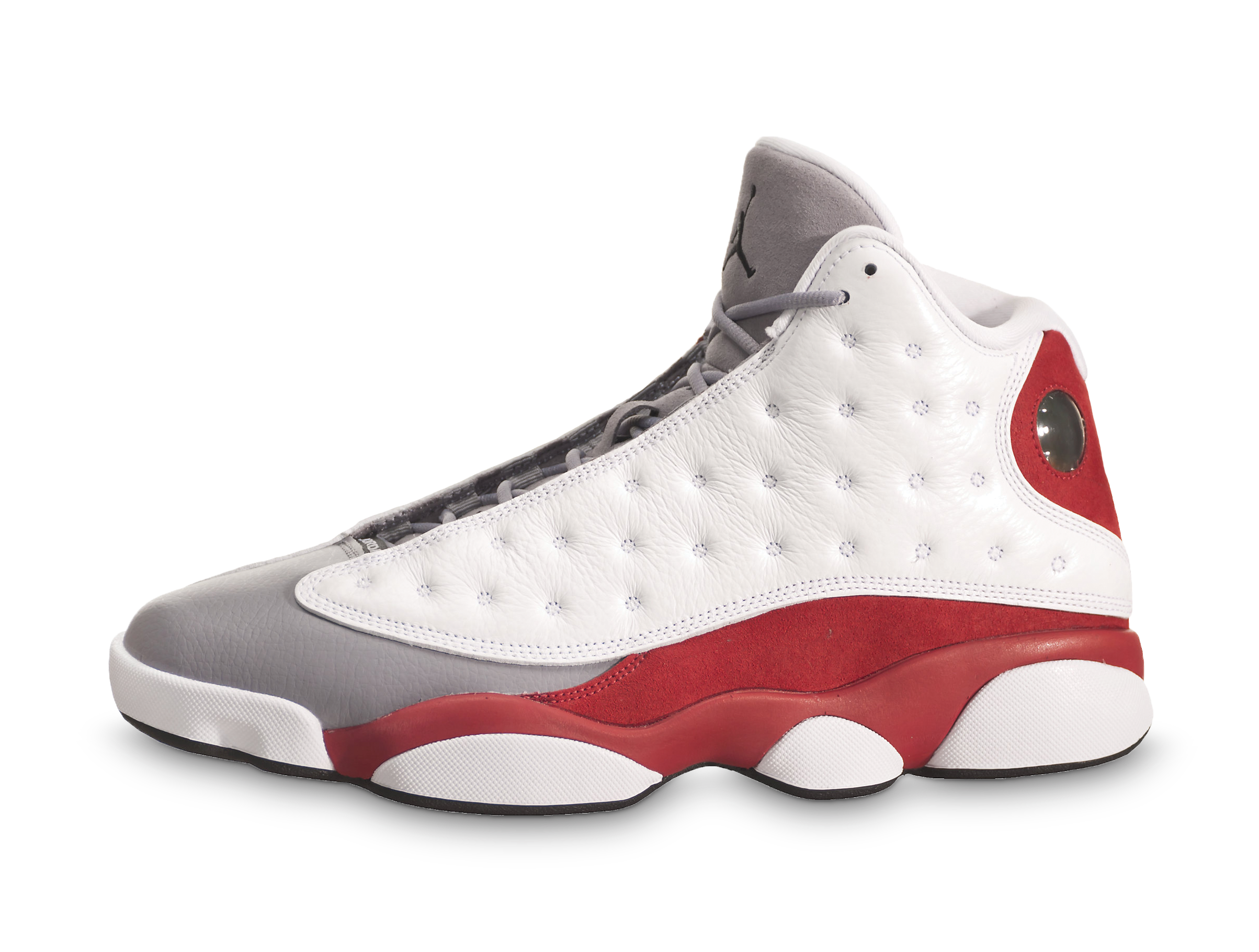 Stylized to resemble a panther's paw, the 13s are probably Tinker Hatfield's best execution of a high-concept Jordan and one of the brand's most unique shoes, even though the holographic "eye" may be a touch on the silly side. 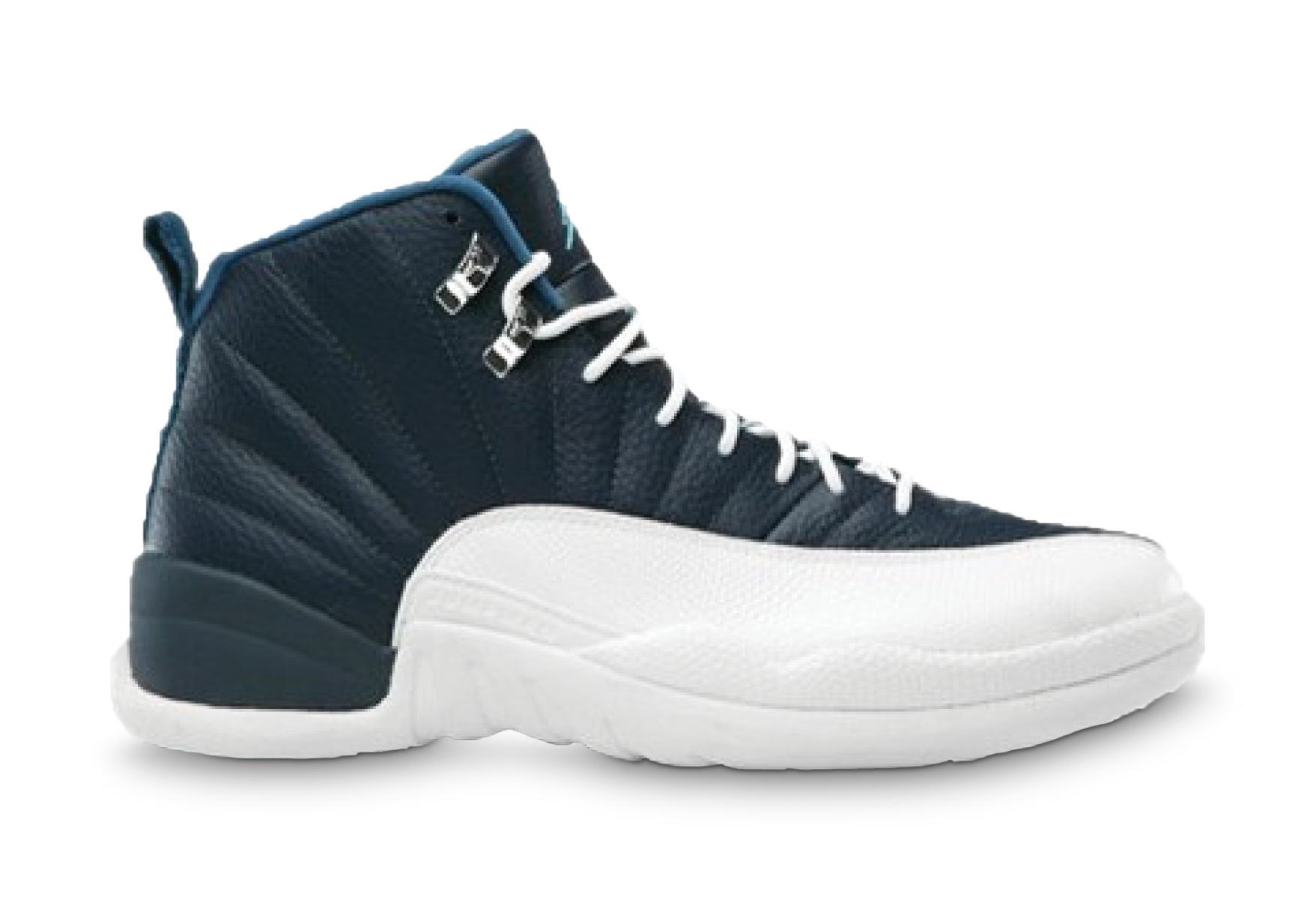 The faux-lizard skin "Rising Sun" leather print on the 12s makes them one of the best, most expressive of the line-patterned Jordans, distinguishing itself with subdued design instead of silly details. 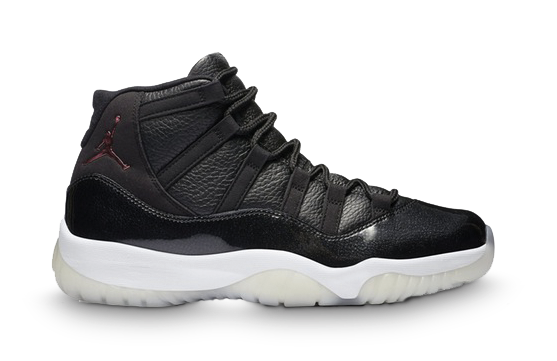 Hatfield's favorite Jordan, and a perennial fan favorite, the 11s are one of the best, but the 10s are simply a better, more clean execution of the "dress sneaker" concept. 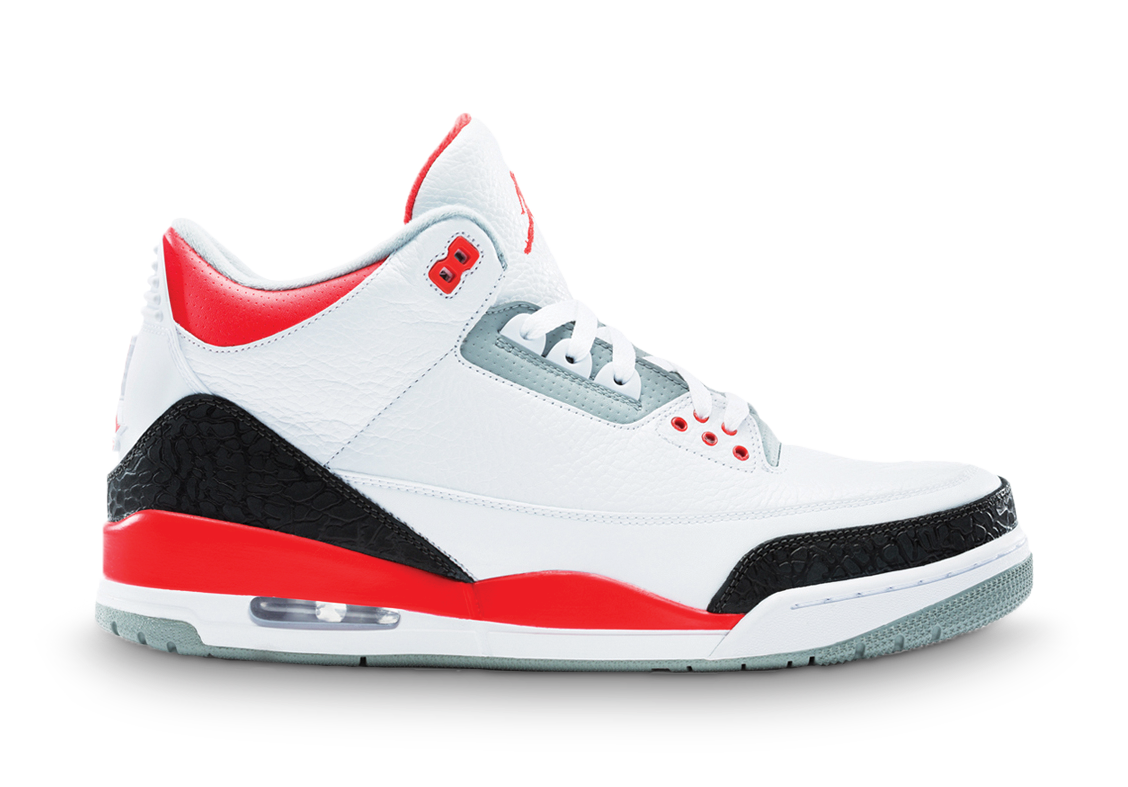 Tinker Hatfield's legendary 3s are the shoes that kept Michael Jordan with Nike. Despite the 3s' importance, the 4s are a more memorable and enduringly influential model that better executes the 3s' stylistic concepts.

The cream of the crop, the best six Jordans are all unimpeachable classics to sneakerheads and casual shoe fans alike. 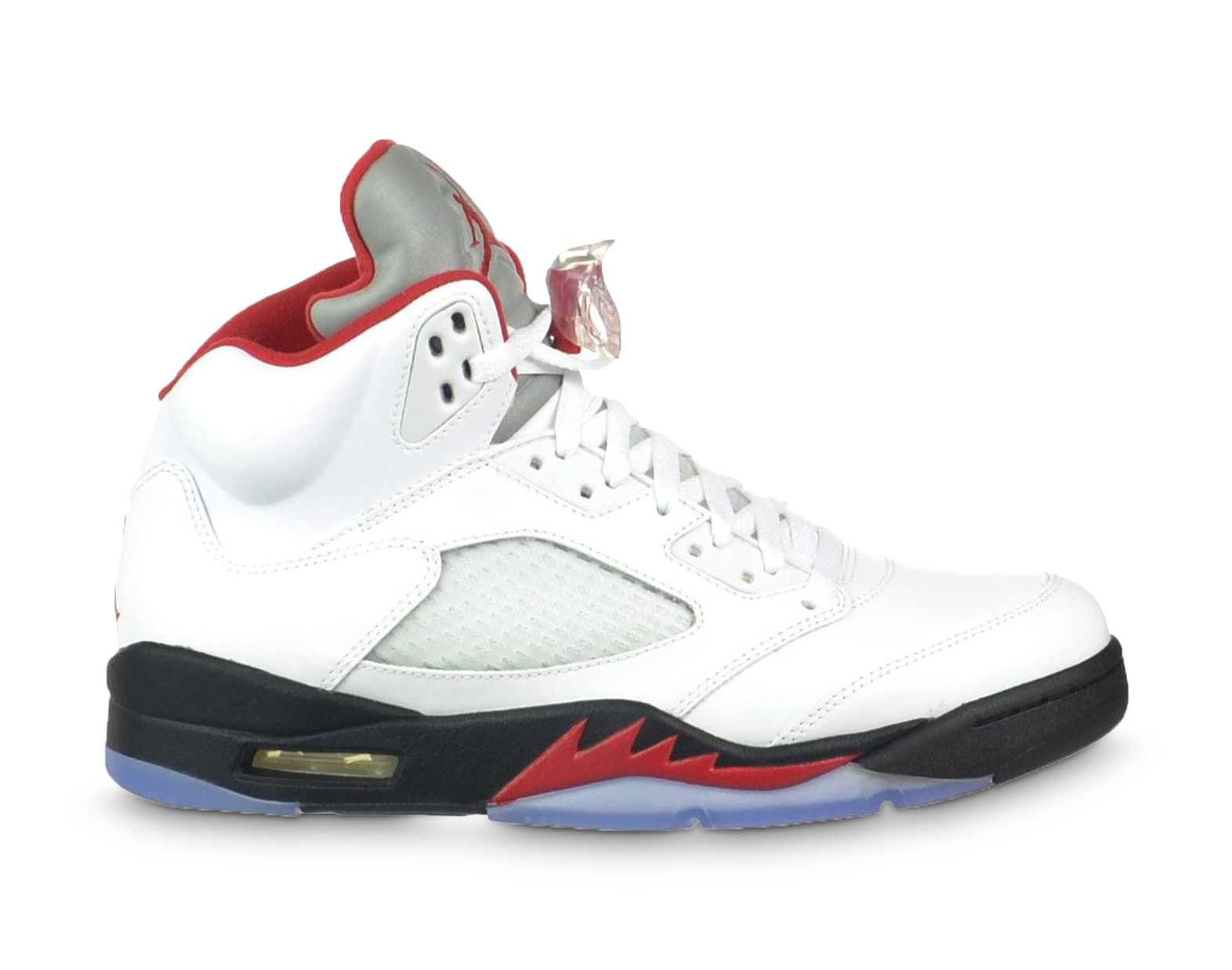 The 5s' shark-toothed soles and mesh side panels marked the beginning of a period of many of the best and most tastefully ostentatious Jordans. 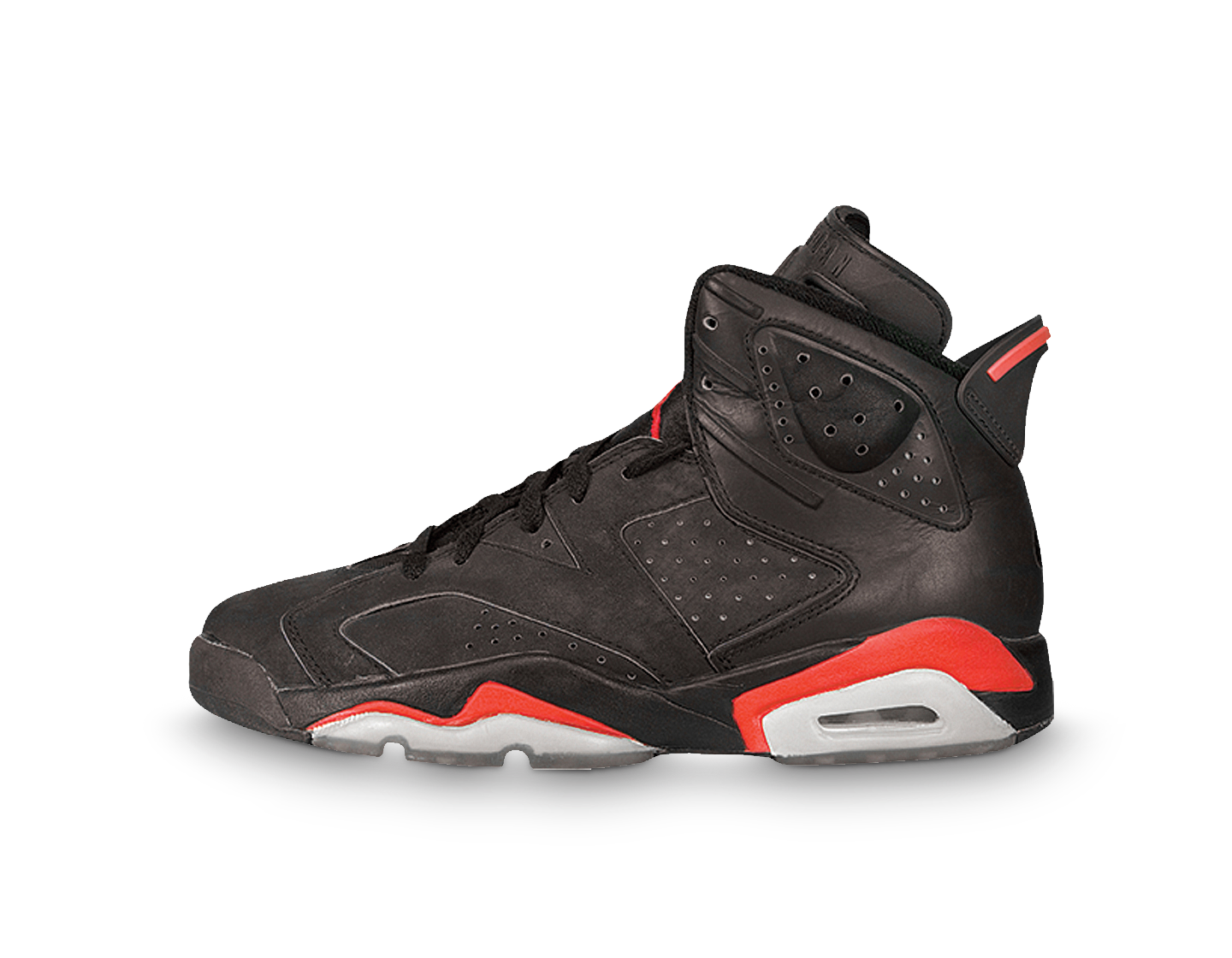 The shoe Jordan wore during his first NBA championship, the 6s perfectly balance classic sneaker style, restrained detail and angular design to make them one the greatest of all time. 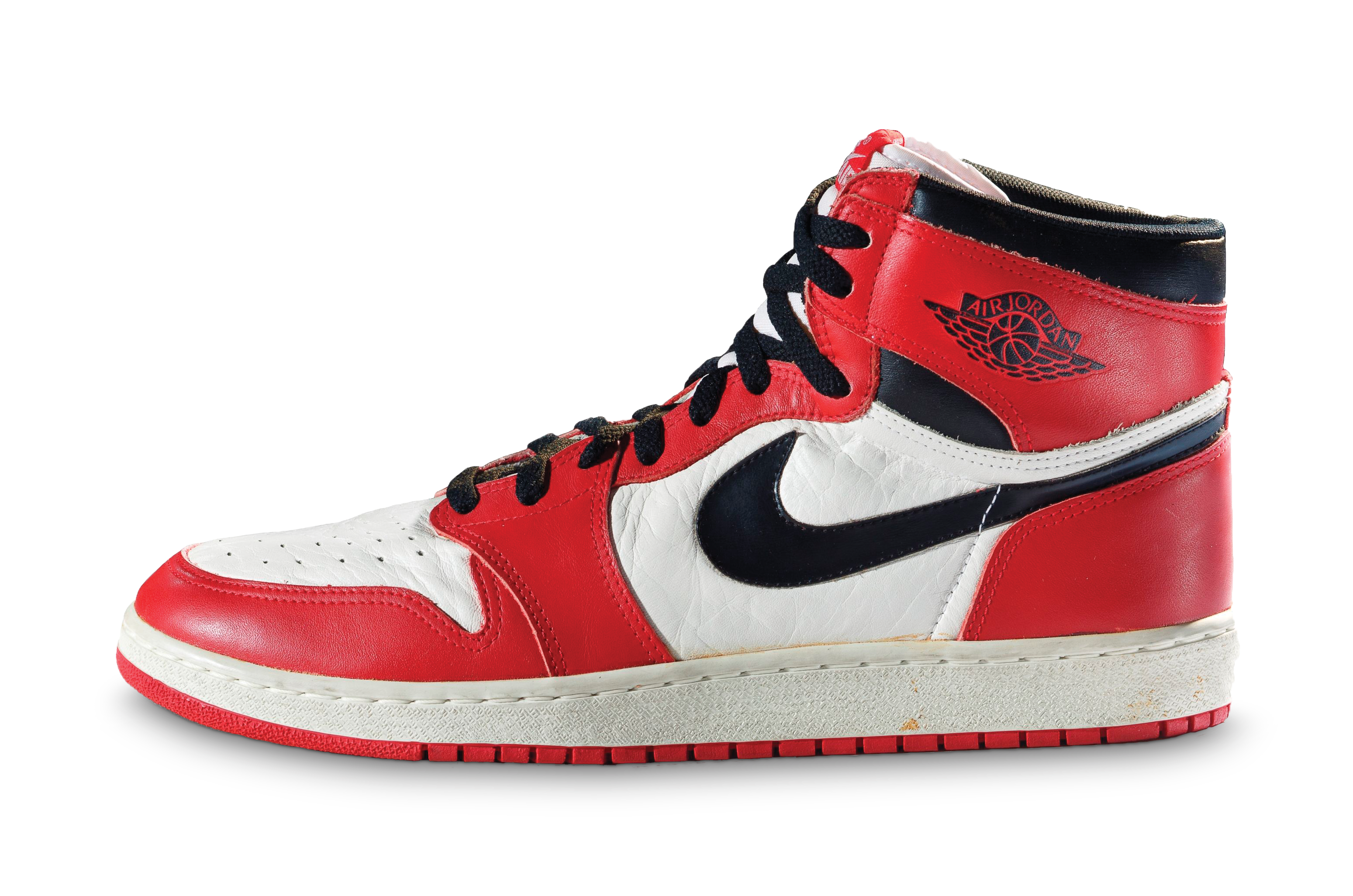 The shoe that started it all, the 1s are a timeless classic that have been retroed every year since 2007 and set the bar for modern high-top sneakers. 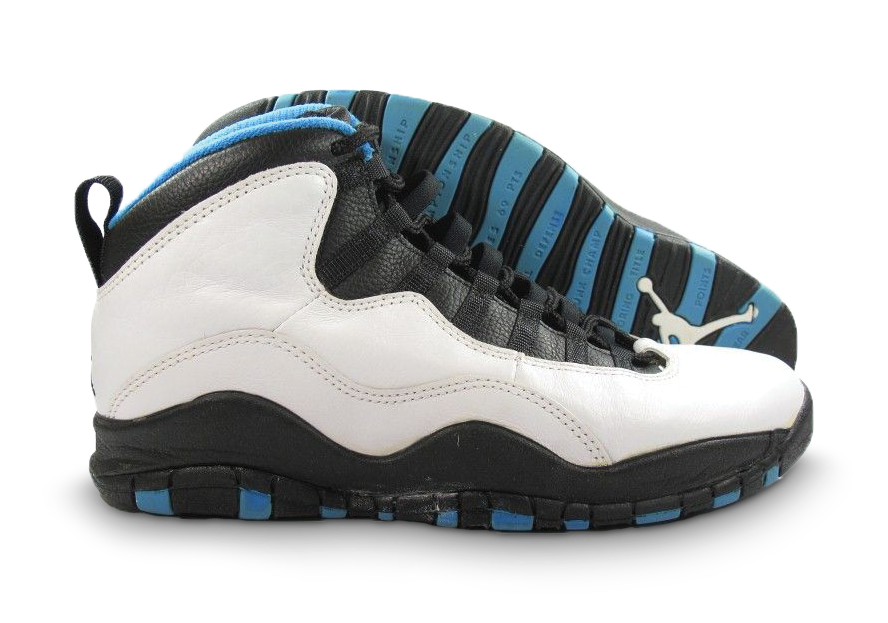 Patent leather be damned. The cream of the crop of mid-90s Jordans, the 10s kicked off a period of clean restraint following the festive early 90s, and remain the high-water mark for dress sneakers.

The 4s took the 3s' combination of functionality and fashion and pushed it to new levels with a flight of details and flourishes that make them one of the most recognizable and influential sneakers of all time. 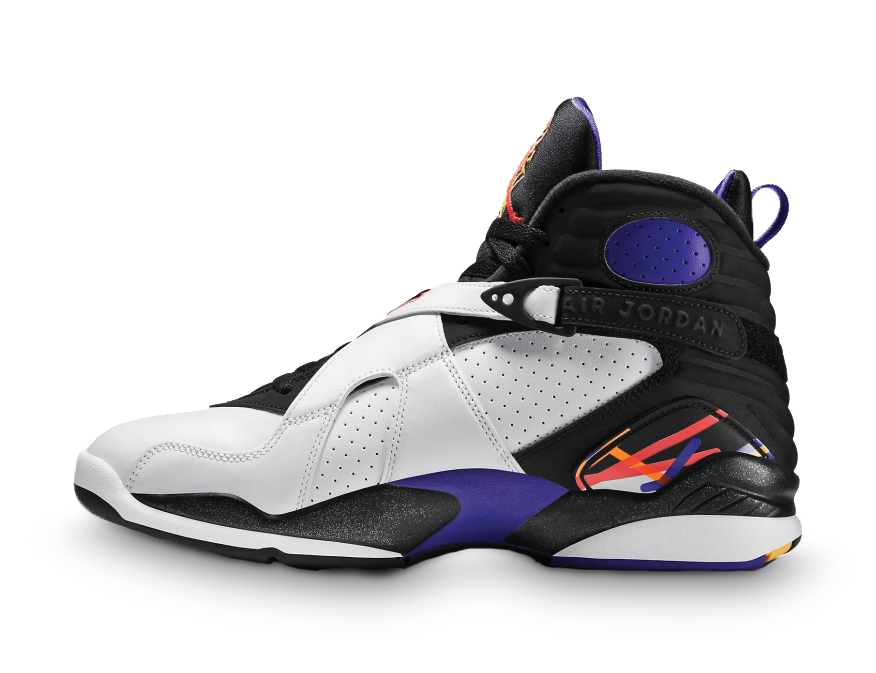 Gigantic. Colorful. Strappy. The 8s represent the culmination of the id driving the Jordan aesthetic. They are recognizable from a mile away, their kaleidoscopic, aqueous pattern supporting an infinite array of colorways. Ostentatious, functional and cartoonishly joyful, the 8s are the Jordan of Jordans.