Skip the $12 tickets and $6 popcorns of the major chains—chances are, you’ve got a much better spot right around the corner.

There's a reason Portland has only a few huge Regal behemoths within city limits. Our little neighborhood theaters serve up the same movies at $4 to $8 off multiplex prices. Most come with cheaper, better snacks, craft beer and food not made of plastic. We visited all of these spots across Portland—not the arthouses and repertories, but the ones where you can dip in and catch a Hollywood movie on a sweltering weekday—ranking them on a scale of 1 to 100 based on highly scientific criteria. Skip the $12 tickets and $6 popcorns of the major chains—chances are, you've got a much better spot right around the corner.

The four-screen Academy Theater has been in Montavilla since 1948, long before the Guy Fieri-approved fried chicken at the Country Cat or the Guy Fieri lifestyle at the Tub & Tan were ever a thing. The seats are springy and arranged so there are few suboptimal lines of sight. The popcorn is made in small batches, lending to a reliable freshness we enjoyed at a late Tuesday screening. The beer list was highlighted by Buoy Czech Pilsner and Rosenstadt Kolsch, and nearby Montavilla Brew Works Bipartisan Porter. But though $4 tickets are a draw, so is the outstanding pizza from next-door Flying Pie, the best hype- and theme-free pizza shop in Portland. Programming is commendable for second-run status, with a finely curated mix of '90s favorites and blockbusters—think Dumb and Dumber and The Big Lebowski alongside Ghost in the Shell. 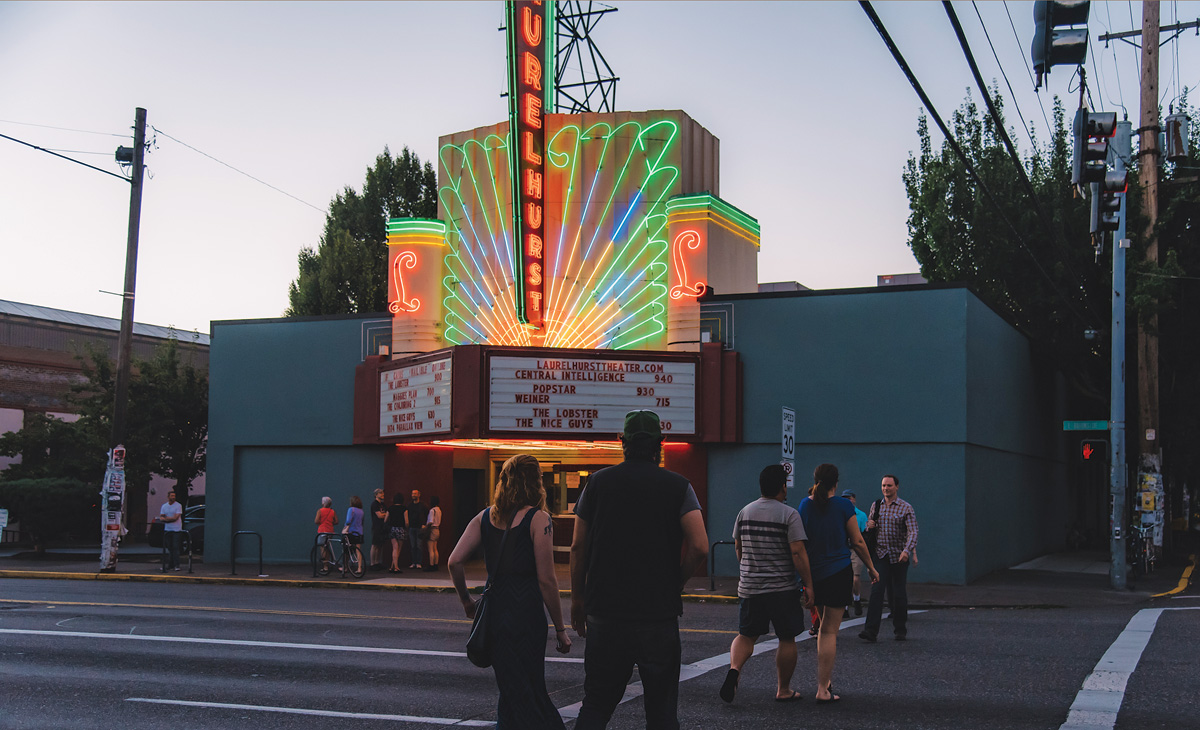 With a marquee that's presided over East Burnside for 94 years, Laurelhurst is the platonic ideal of a neighborhood second-run theater, with $4 tickets, prestige flicks like Get Out and Lion, a crowd-pleasing blockbuster repertory, and near-infinite dining and drinking options on Burnside or 28th Avenue. The popcorn is lightly salted and a little sweet, and although the four screens within are tiny and lined with worn-in seats that barely provide reach to the tables used for stashing that $14 pitcher of Breakside IPA or Lucky Lab Porter, the price is too good to elicit any serious complaints. Skip the pizza unless you're on your way out of the final showing—at which point it's available for just $1 per slice.

Does St. Johns have a portal to Edwardian England that no one told us about? Past a spacious garden patio and old-timey pub—the building was built in 1905 for the Lewis and Clark Exposition and later barged up the Willamette to become an Irish pub—here, you can catch a first-run flick in a circular, dome-roofed room for $7. Skip the over-salted popcorn and head straight for the full menu of pub food and beers brewed at Kennedy School—a $5.50 pint of Equinox IPA was fresh and boozy, and they'll bring it to you as you watch. Though you're halfway between downtown St. Johns and the excellent combo of North Lombard's excellent Lombard House beer bar and the St. Johns Marketplace cart pod, you may just want to chill in the garden.

This shabby-chic St. Johns duplex is popular, but a bit dumpy and awkward, with seats that have a way of digging into your back and bad lines of sight. But beyond the subpar first-run viewing experience attached to the $8 price tag, there are merits: The popcorn was crispy and kernel-free, the Ecliptic Orbiter IPA fragrant and refreshing, and the surrounding 'hood loaded with choice spots like Slim's, Tienda Santa Cruz and Royale's Garrison Taproom.

It's a little rough around the edges, but Belmont's over-a-century-year-old Avalon is about as good as you can ask for with Portland's super-discount theaters. Avalon rotates through a selection of five, mostly child- and teen-friendly, second-run blockbusters (for big kids, Logan screens after 9 pm) at the bottom market price of $3.50 a ticket, down to $3 for under-12s and seniors. Though the theater is small and a little cramped, you can stretch your legs in their nickel-fueled arcade for $3.25, or head immediately outside into one of the best bar districts on the eastside.

This former elementary school's auditorium is now an almost cavernous second-run theater, stocked with enough mismatched loveseats of varying firmness to seat a couple hundred people, and side tables big enough for the whole pizzas you can order at the adjacent bar. The popcorn ($4.25 for a small) is fresh, and you can top it with a mess of fixins like nutritional yeast, Parmesan and Cholula, but the Kennedy Equinox IPA was somehow less fresh than the one served in St. Johns. Programming is relegated to a disappointing handful of big-budget, second-run popcorn flicks—but there are worse ways to spend $4.

Though $9.50 a ticket, the Bagdad is a beautiful venue loaded with oversized seats and chair-side service for those seated in the massive balcony who order off the Bagdad Pub menu. The popcorn is fine, but the real draw is the dazzling array of powdered topping flavors, like "Thai," "barbecue" or "ranch." As for the beer, it's also fine. The best neighborhood draw is the attached Backstage Bar with its combo of pool, shuffleboard and impossibly high ceilings.

Aside from a great tap list with Belgian double IPA from pFriem and a fresh batch of Fat Head's IBUsive IPA, CineMagic has little appeal to moviegoers who don't live close enough to casually stop in. The joyfully flimsy and bouncy chairs a plus, but not much else at CineMagic is worth writing home about. The popcorn on our visit was somehow both burnt and filled with uncooked kernels, and the vision behind programming involves a series of indie-ish $7.50 first-run films left to play until they're relegated to second-run.

It's tough to enjoy your fresh, delightfully buttery popcorn ($3, small) and delicious Breakside IPA at the Moreland. Opened in 1926, this one-screen theater plays first-run movies for $7.50 ($5 matinees), but it doesn't have anywhere for you put your treats except the floor, and if you're in one of the cramped, uncomfortable seats toward the front, God help you. The Moreland doesn't have any shows before 5:30 pm on weekdays, and if you want to go anywhere outside of Sellwood you're best off not drinking.

It isn't that we had a bad time at Roseway. Our $8, first-run screening of the slightly underappreciated Guardians of the Galaxy, Vol. 2 was mostly full. We enjoyed the film in our cushy, spacious seats, even though the room-temperature popcorn was full of unpopped kernels. It's just that the Roseway mostly replicates the multiplex experience—minus beer—at just under multiplex prices, minus the convenience and selection that come with big business bucks. You're probably better off at Lloyd.

How We Scored Each Theater

Programming: 25 points. If you only have one screen, don't waste it on the Smurfs movie.

Value: 25 points. Cheaper the better, for tickets or snacks.

Popcorn: 10 points. Be fresh. Have toppings.

Other Snacks: 10 points. Dinner and a movie needn't be consecutive.

Seating: 10 points. Hard to enjoy a movie if your ass hurts!

Location: 10 points. The more cool shit nearby, the better.

Should You Float the Clackamas or Sandy River?

Something To Do Every Single Day of Summer 2017 in Portland